Tylor seizes the opportunity to get in good with the higher-ups and make a name for himself in the latest episode of Monsters at Work, now streaming on Disney+. 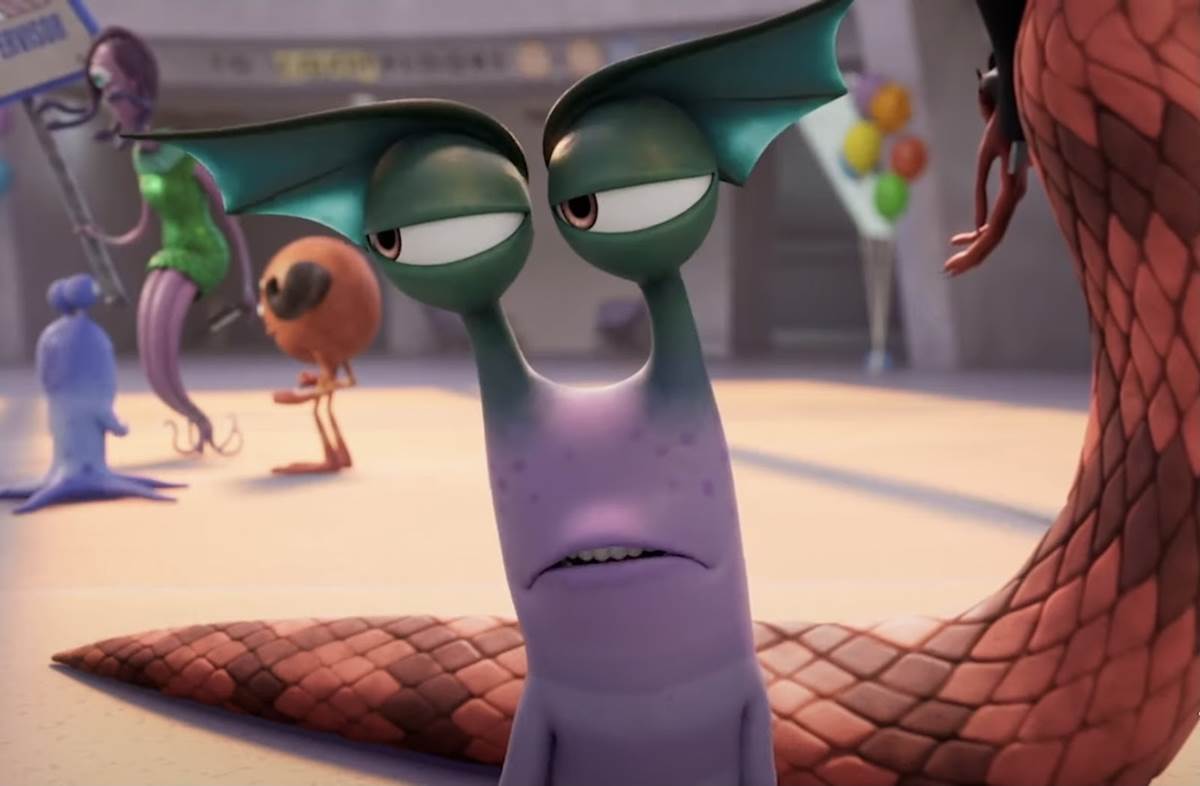 We’re treated to the very familiar simulation room again as Tylor Tuskland…er… Tuskmon is auditioning (again) to become a jokester with Ms. Flint. We see a montage of audition attempts, which Tylor later points out himself to be seven, before she breaks the news: Tylor isn’t funny.

BUT! It just happens to be Mini-Monsters day at Monsters, Incorporated, a sort of Monstropolis version of Bring-Your-Kid-To-Work Day. The kids are all on scene, and Talia, Ms. Flint’s daughter, just happens to be grouped with MIFT. She is originally paired with Val, but as soon as Tylor catches wind that Talia is Ms. Flint’s daughter, he wants to trade so he can make himself look good and hopefully she’ll pass that on to her mom. The rest of the MIFT team seems to be paired appropriately, with Duncan’s kid even having a fondness for contracts himself, and Fritz’s sharing Drooler Coolers.

Tylor is laying it on pretty thick, reading joke books and trying to pretend to discover that Talia is Ms. Flint’s daughter, but Talia is having none of it…almost like she’s seen it before. The team gets a work order since Needleman and Smitty lost their assigned kid in the door vaults. The group and their kids all take chase in those door vehicles we saw earlier, again giving armchair imagineers ideas, especially since there are now multiples of the vehicle. Tylor and Talia are together giving chase, and while the other kids seem to be entertained, Talia seems to know what this job requires and seems to almost admire Tylor’s abilities to do it. The kid is saved from a shredder hallway, and the team reunites safe and sound back at the MIFT office.

As Talia seems to actually have respected and grew fond of everything that had happened, Tylor shifts gears and tells corny jokes again, ruining Talia’s mood, who just like her mother, tells Tylor that he is not funny. He pulls Val aside and starts venting about the whole thing, insulting Talia and her mother in the process, saying that he thinks that Ms. Flint is the most unfunny monster in Monstropolis and she should go tell her mother that. Clearly having overheard the whole conversation, Talia says that’s exactly what she’ll do, and leaves for her mom’s office.

Tylor lets her go….briefly…then realizes the impact that this could have and starts chasing her down. He catches up to her on an upper floor and smashes his little cart into a pastry stand, much to the delight of the children. He comes clean with Talia who says she’s seen it before. Other Scarers have tried the same thing, but Tylor is the first one to ever admit it, earning her respect.

Back down at MIFT, Talia wants to say something, almost echoing Tylor’s journey in the series, saying that when she first got assigned to MIFT she thought it would be the worst possible thing ever, to spend the day with weirdos in the underground looney bin, but she was wrong. They’re the monsters behind the monsters, who don’t get the glory of the Jokesters even though they’re the ones keeping the power plant running. She is now proud to call herself a Mini-MIFTer. On her way back upstairs, Talia says goodbye to Tylor saying that he makes a pretty good MIFTer.

As the day ends, we see Talia regrouping with her mom and catching up with what happened. She asks who Talia was paired with and groans audibly when she says Tylor Tuskmon, assuming her day was horrible. Talia replies, “No Mom! He was…funny!” So maybe a door to the laugh floor has reopened again for Mr. Tuskland…er…Tuskmon.