The ongoing plot of Marvel’s War of the Bounty Hunters crossover event, which has been proceeding in tiny incremental stages over the past few months, takes another step backward in this week’s issue #15 of Star Wars: Darth Vader.

This installment, entitled “The Assassin’s Choice,” once again rewinds time to before Crimson Dawn’s auction for the carbonite-frozen Han Solo, following the Sith assassin Ochi of Bestoon and his new master Darth Vader as they travel to the Outer Rim planet of Arkanis to infiltrate an underworld den of criminality. 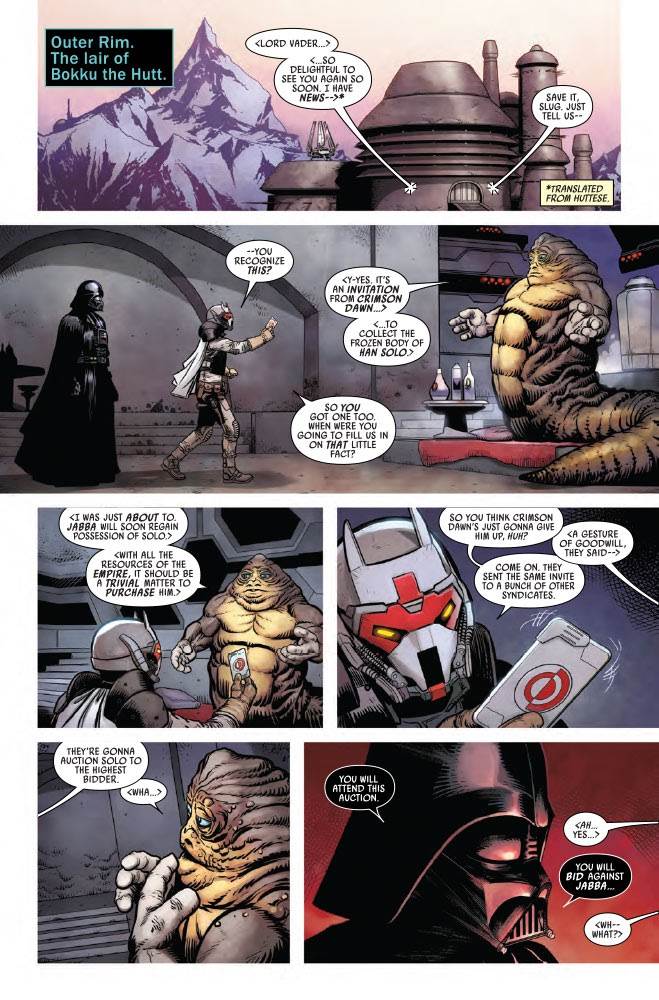 From there, Ochi and Vader visit the lair of Bokku the Hutt, where they manipulate the crimelord into bidding against Jabba at the upcoming auction. Through all these machinations, the relationship between the Sith Lord and his pet assassin seems to be on thin ice, as Vader thrusts Ochi into one dangerous situation after another in a series of loyalty tests. After his all-too-brief appearance in Star Wars: The Rise of Skywalker, Ochi is becoming a bit more of an interesting character in these recent comics, though I’d like to see him take the helmet off every once in a while, and I’d be even more appreciative if Hasbro eventually made him into an action figure– that armor is pretty sweet-looking. Ochi winds up duking it out with Crimson Dawn in this issue, and we get a better taste of just how many members that syndicate counts among its ranks (hint: there are a lot of them out there, which makes Qi’ra reemergence at this point in the timeline even more intriguing). 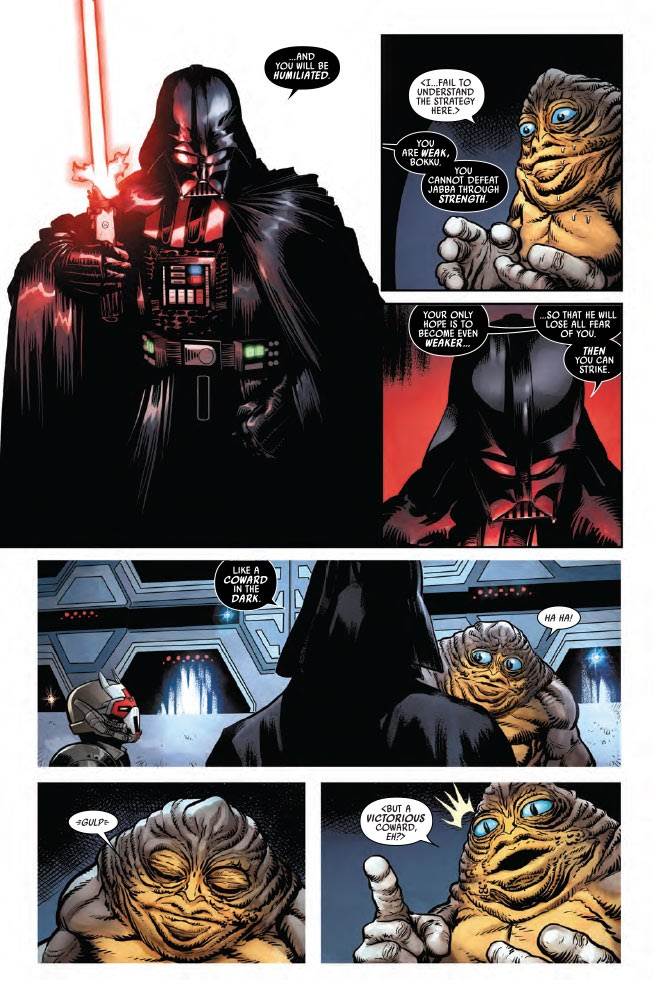 Despite that tantalizing piece of new information, the bulk of this issue is devoted to the battle between Ochi and the Crimson Dawn henchpeople, even going so far as to end on a cliffhanger of the assassin partnering up with Vader against the red-cloaked lackeys. It’s an action-packed story, but that doesn’t always necessarily make for the most compelling reading– although I do like that writer Greg Pak is spending some time developing the relationship between these two unlikely dark-side allies. It also helps that artist Rafaelle Ienco’s illustrations remain crisp, clear, attractive, and evocative, drawing the reader further into the narrative and its setting. I especially liked the pre-combat scenes set in the pastoral countryside outside of Bokku’s hideout. It’s rare that we get moments of peace and (temporary as it may be) tranquility like that in this franchise with the word “War” prominently featured in its title, but when we do it feels as though we can climb through the comic-book panel and into the well-established reality of A Galaxy Far, Far Away.