After a year during which the popular event didn’t happen at all (for the first time since 2005), Universal Studios Hollywood’s Halloween Horror Nights is returning for 2021 with what its creative director John Murdy calls “comfort food”– a collection of mazes that will welcome guests back to the Southern California tradition by featuring the familiar. But on top of bankable attractions like The Texas Chainsaw Massacre, The Exorcist, and AMC’s The Walking Dead, Murdy and his talented team of designers have also put together two thrilling new mazes for this year’s Horror Nights– namely The Haunting of Hill House (inspired by the Netflix original series of the same name) and the innovative original concept “Universal Monsters: The Bride of Frankenstein Lives.”

This week I had the amazing opportunity to walk through a preview of both of these new mazes with Murdy as tour guide for our group of theme park reporters. Starting with “The Haunting of Hill House” and continuing with “The Bride of Frankenstein Lives” (to be published in a separate post), let’s take a deep dive into most interesting details that Universal Studios Hollywood’s Halloween Horror Nights’ creative director had to share about these experiences. “There’s a couple big challenges in this maze,” says John Murdy as we step through the facade. “One is just the house itself, because when you look at that set [on the show], they built it practical. Trying to convert that enormous two-story house into a maze at Halloween Horror Nights reminded me of working on Guillermo del Toro’s Crimson Peak in 2015. It was a similar challenge. The other challenge is the character of the Bent-Neck Lady herself. When you design something like this, you of course think about the aesthetic, but you also have to think about the ergonomic. Is it reasonable to ask an actress to do that [with her neck] for seven or eight hours a day? No, it’s not. So we did a science project to figure out how we can get the look of that extreme broken neck, but still have it be a live performer? Our makeup artist Patrick McGee invented this figure that the actress actually wears. It’s a hybrid costume/mask, but also has an artificial head. Mike Flanagan, the creator of The Haunting of Hill House, was down last week to check out the maze, and his reaction was, ‘I almost feel like I’m on the set again.’” 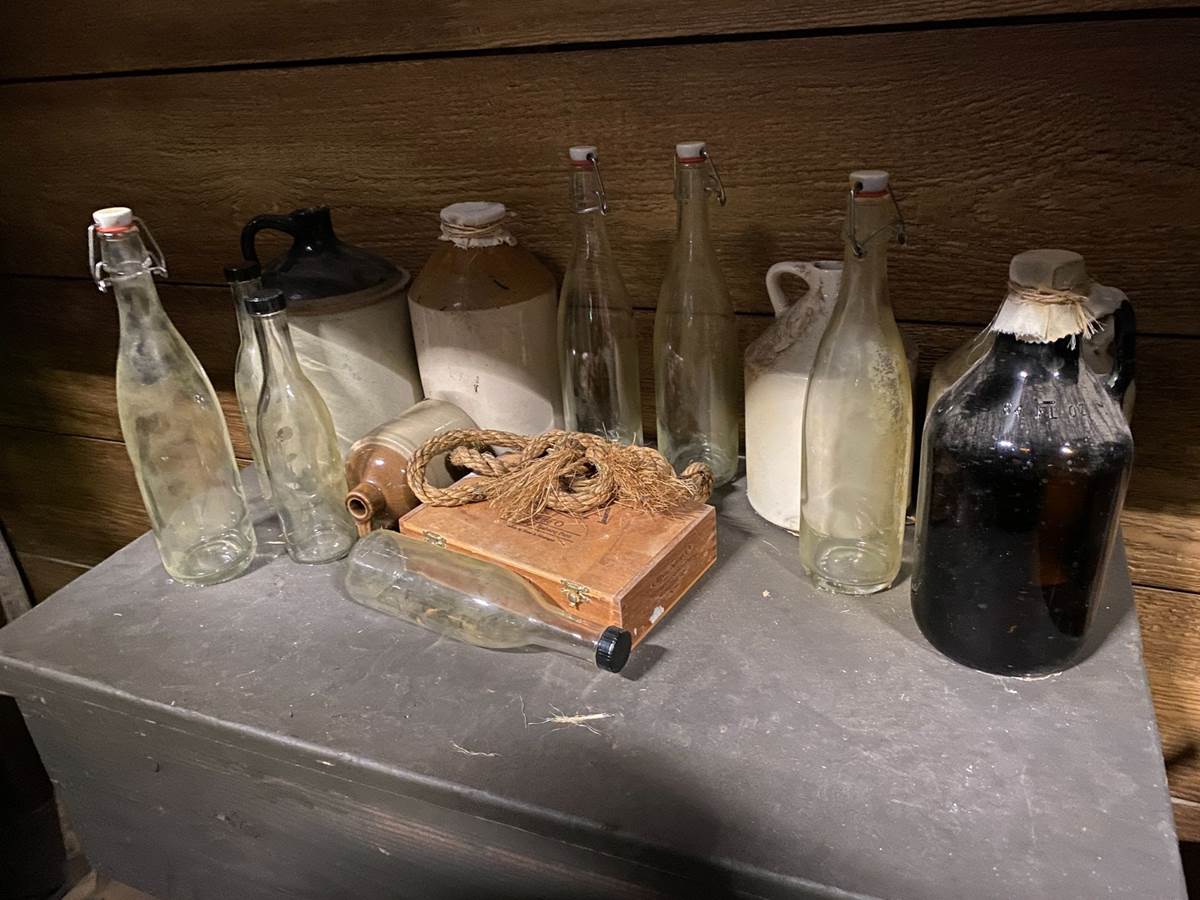 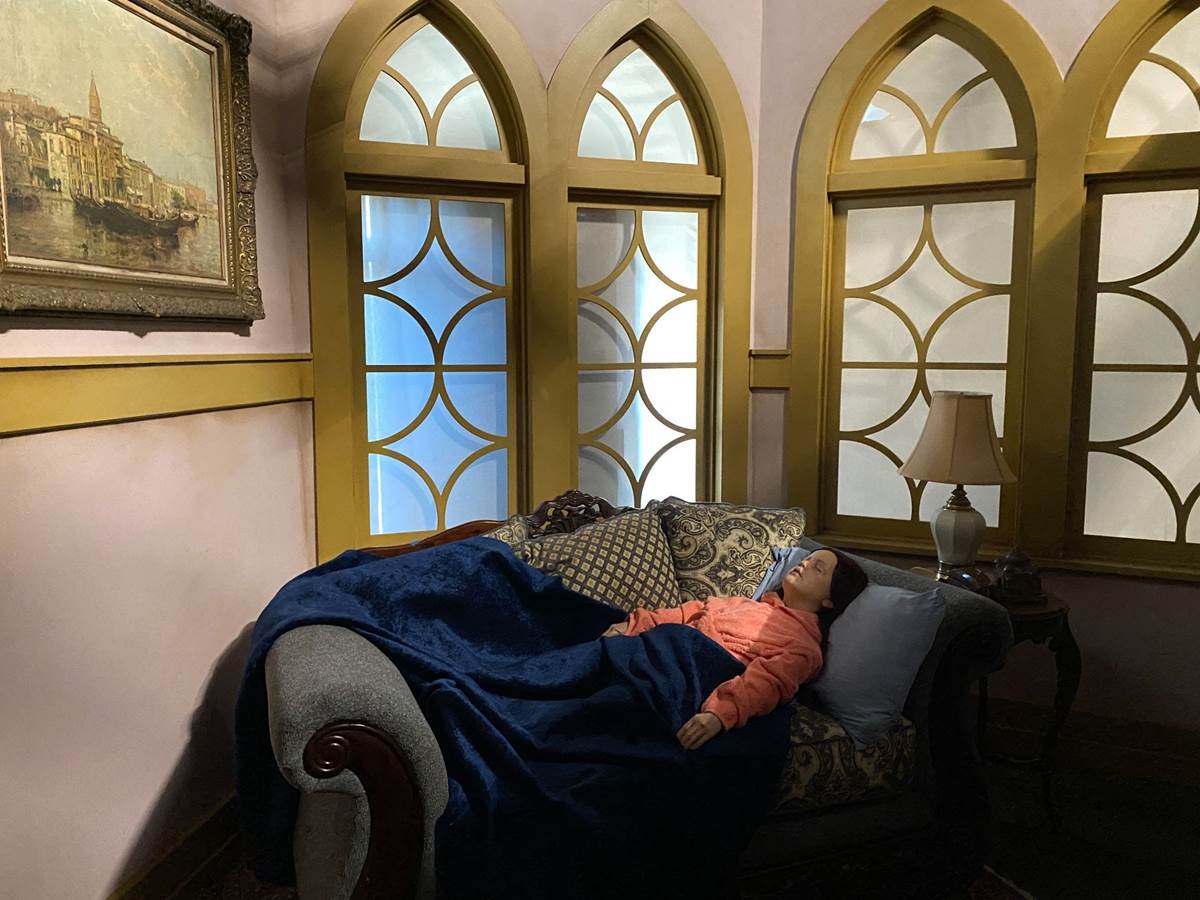 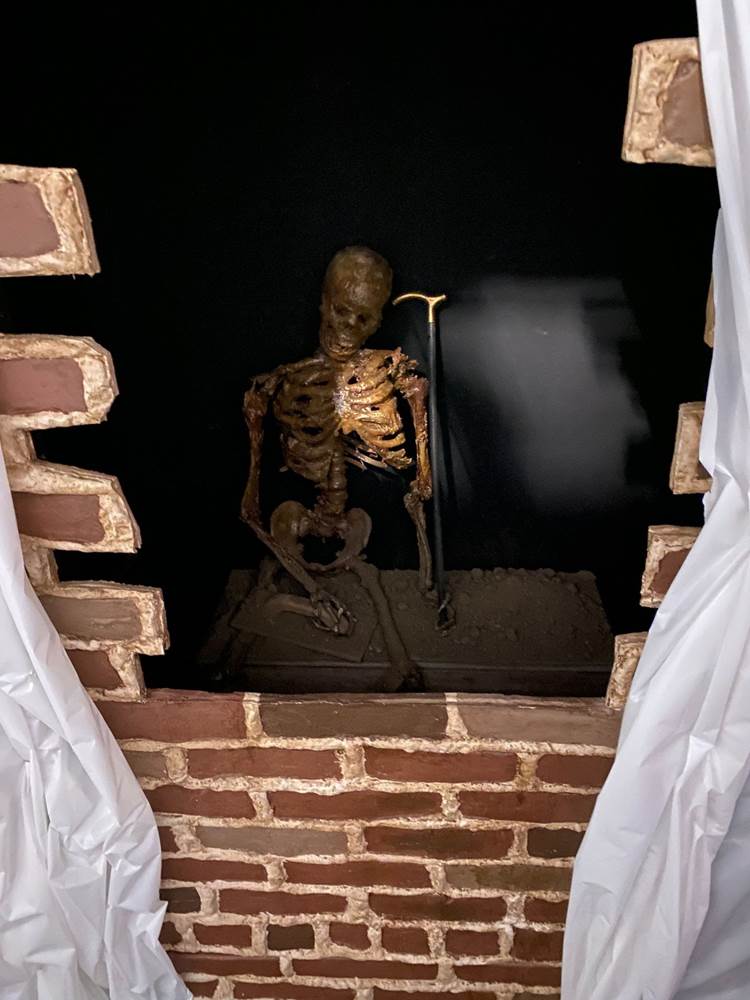 Murdy explains the appeal of having franchises converted to mazes for the powers that be behind them. “It’s not often that the filmmakers get to experience their properties in a live setting where they can see real-time reactions of people responding to what they created. That’s what they get at Horror Nights, so I think that’s what’s so attractive to them. For Hill House, we wanted to be consistent with the tone of the show. This maze, like the series it’s based on, is a slow burn. The paranormal stuff ramps up as you go along, and things that happen in the front end of the maze are really subtle.” As we step through the first few hallways, Murdy makes a point to highlight the details on the walls around us. “A big part of dealing with this maze actually came down to the wallpaper. The wallpaper is really specific in this show, so we wanted to [replicate that]. The more I stare at it, the more faces I see.” But where do all the period-accurate props scattered around the maze’s sets come from? “We have a very large facility off-site that functions as a prop warehouse and a studio for us. There are rooms that are just light fixtures and just clocks. We have so much stuff.” 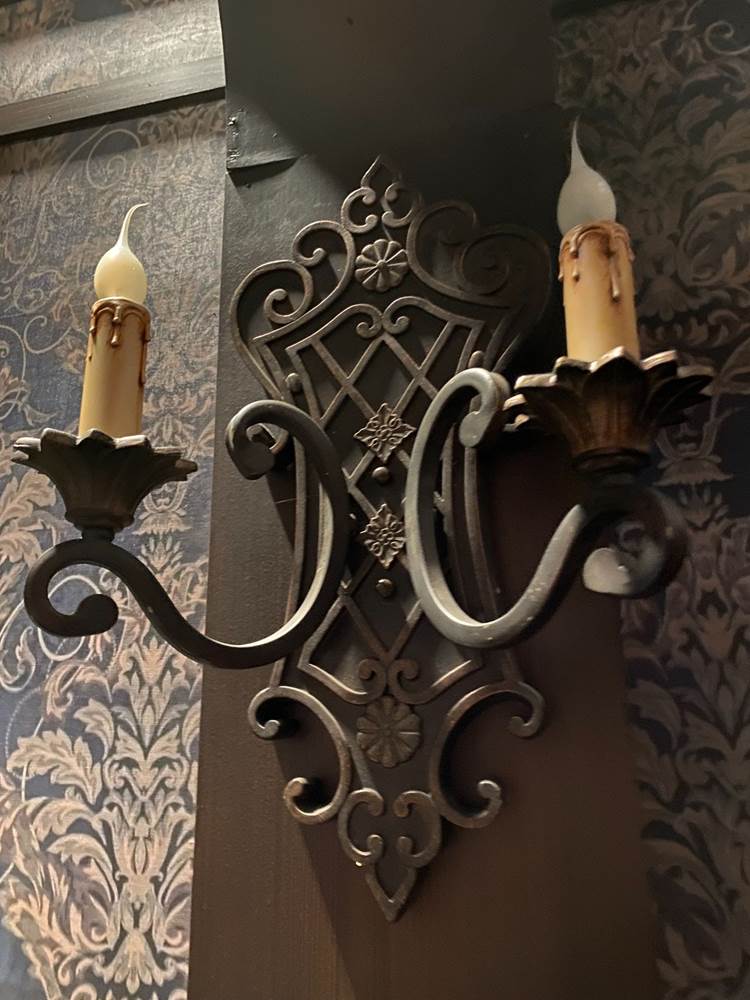 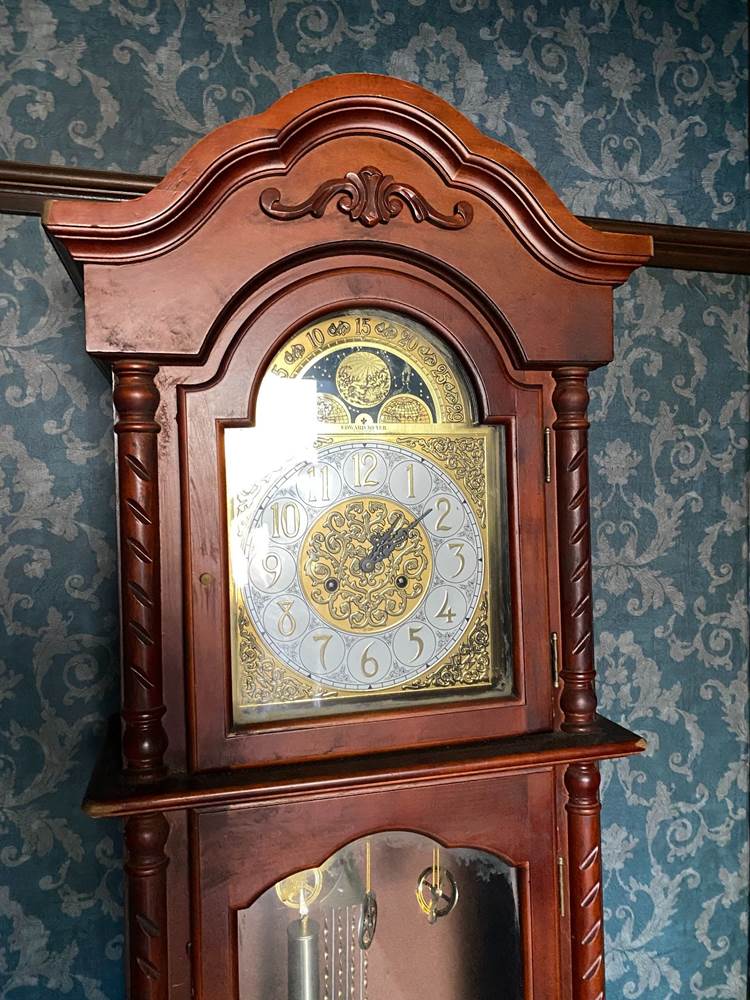 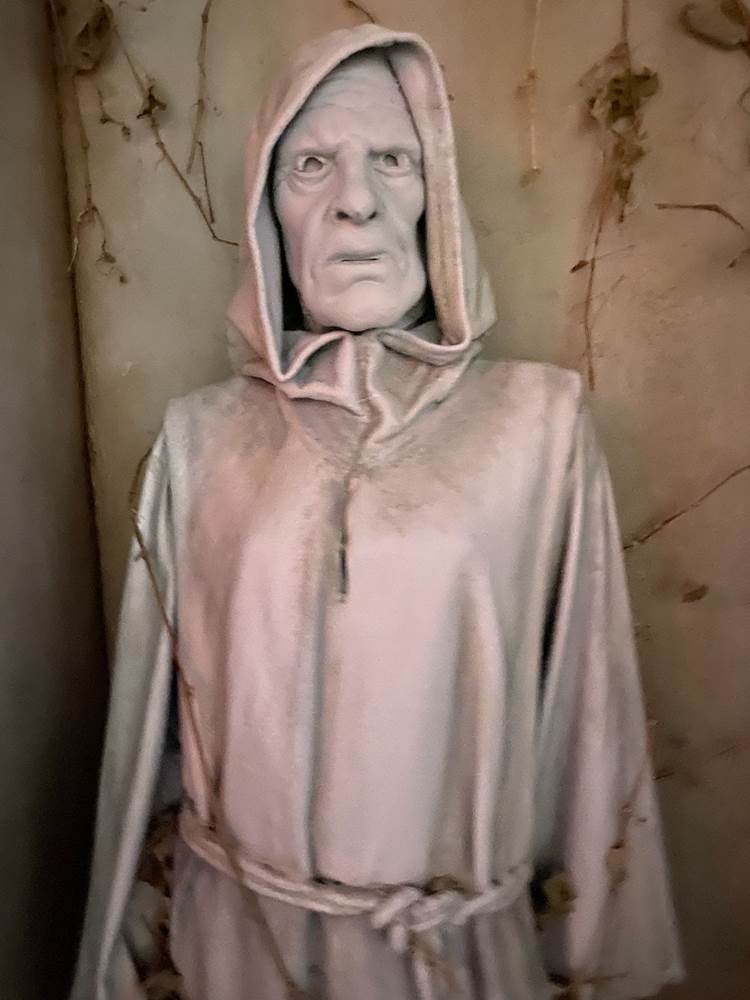 Along the way, we stop in front of what looks like a mirror mounted in the wall, but as Murdy explains, this setpiece is going to deliver one of the oldest tricks in Horror Nights’ book. “It’s called Pepper’s Ghost. If you know The Haunted Mansion at Disneyland, when you go into the ballroom, all the ghosts [are created using this effect]. But it’s really a magician’s illusion that was invented in the 1800s. It’s an angled piece of glass. The Bent Neck Lady is over in a room off to the side, but when you light the object in that black void, it appears like a ghost in the angled piece of glass. We’ve played around with Pepper’s Ghost quite a bit. That’s how we did the Grady twins’ ghosts in The Shining. We used it for Dracula turning into a wolf in our Universal Monsters maze. The problem with Pepper’s Ghost is it occupies a heck of a lot of space, and you have to have your math exactly right or you really regret it. The first time we ever did one of these, we were just off on our calculations and instead of looking like it was in the room, it looked like it was behind the wall, and we had to rebuild the set to get it right.” 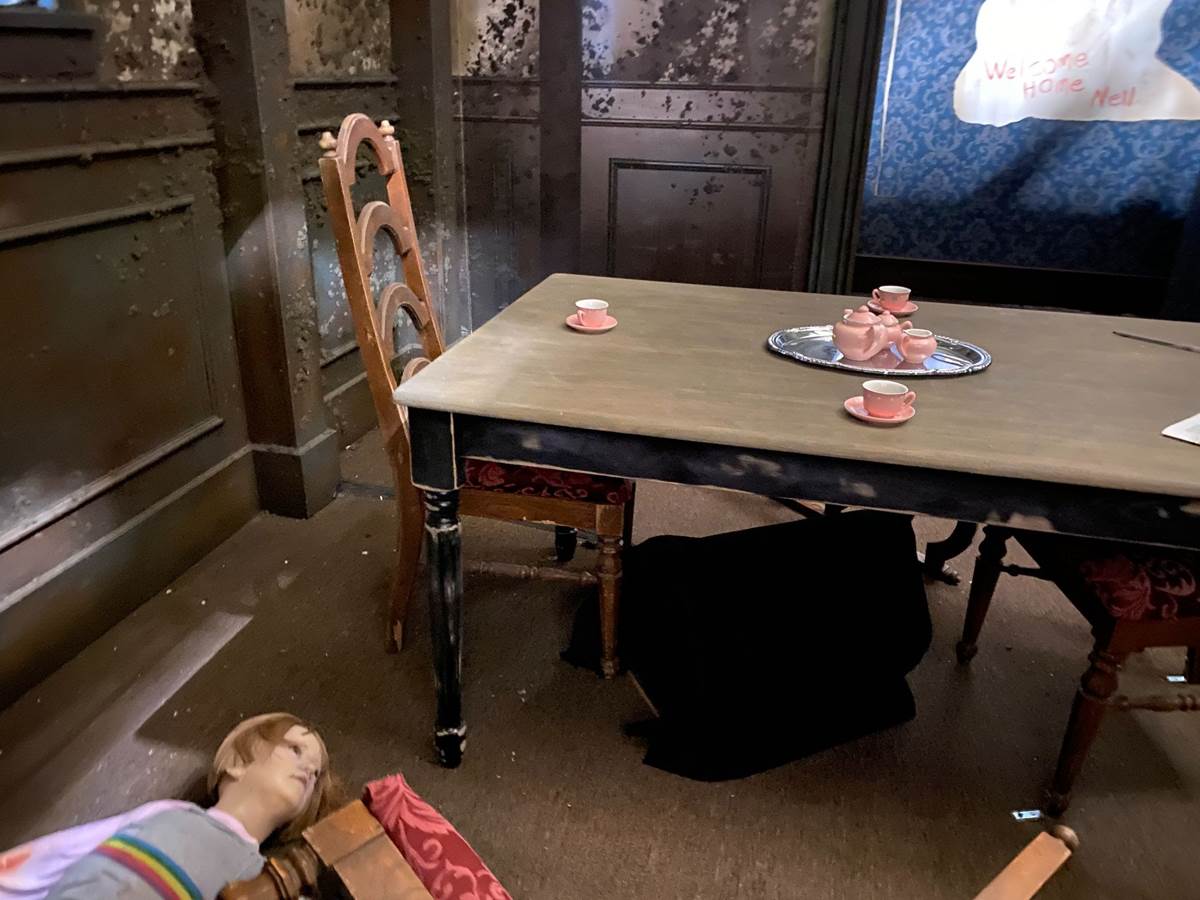 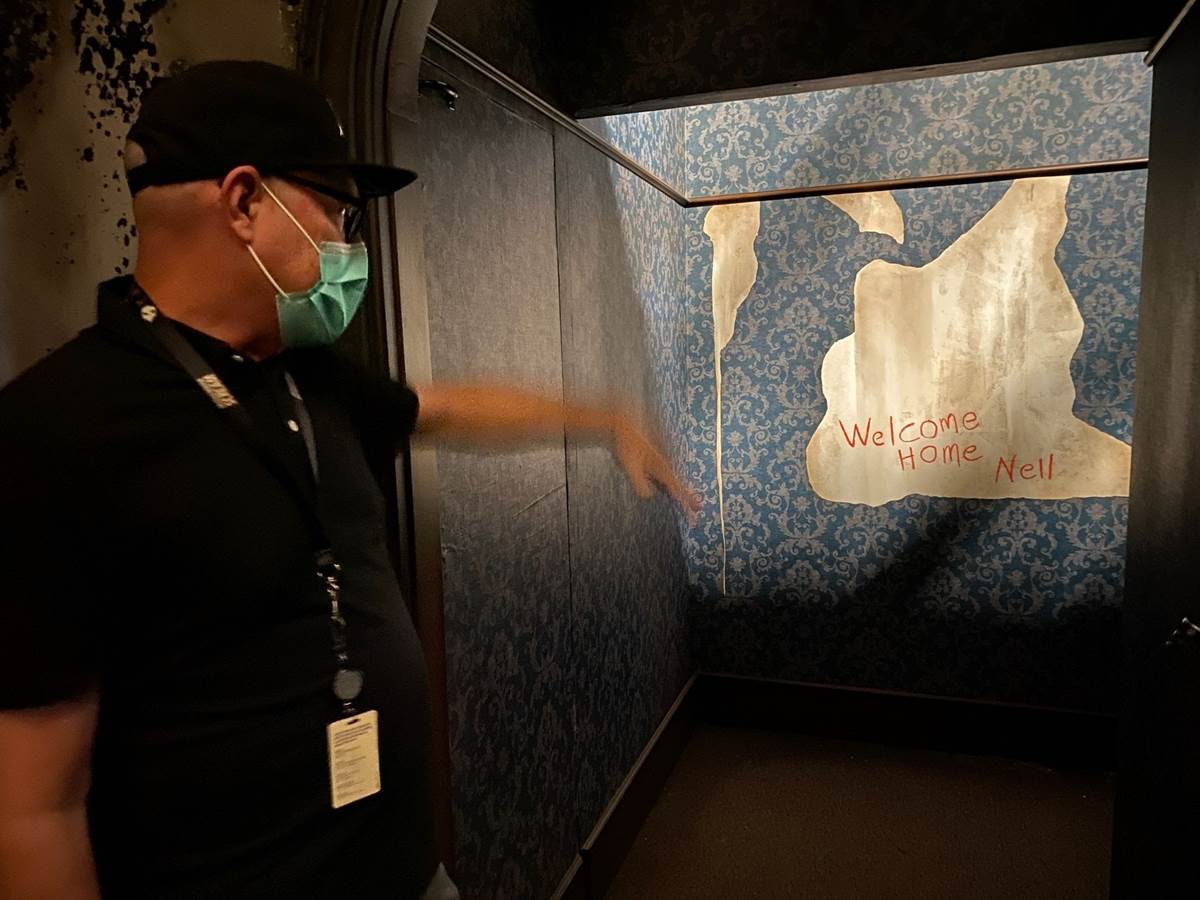 “There’s something the show did that I thought was really interesting, and it was the juxtapositioning of time,” says Murdy as he shows off some of the scrim lighting effects that will be used to make ghosts appear behind the house’s walls. “There’s two timelines that Hill House exists in– the past and the present. What I really liked about what Mike did in his direction is you could be in a scene in the past and they’re walking down the hallway, and then they turn the corner and they’re in the present. We wanted to somehow replicate that [in the maze].” Murdy also talked about the advantages of doing Halloween Horror Nights during the streaming revolution. “When we started working with Netflix for Stranger Things, I knew that they were going to invest big in horror, so I knew that this was a company we were going to want to start working with. As more of these streaming services start coming online, it’s creating more opportunities, which is fantastic for us. After 15 years of doing this, you get to a point where you’ve done most major franchises in horror. There’s not a lot of properties that are on my bucket list that I had back in the beginning that we haven’t done. Netflix is doing a lot of horror, which is great.”