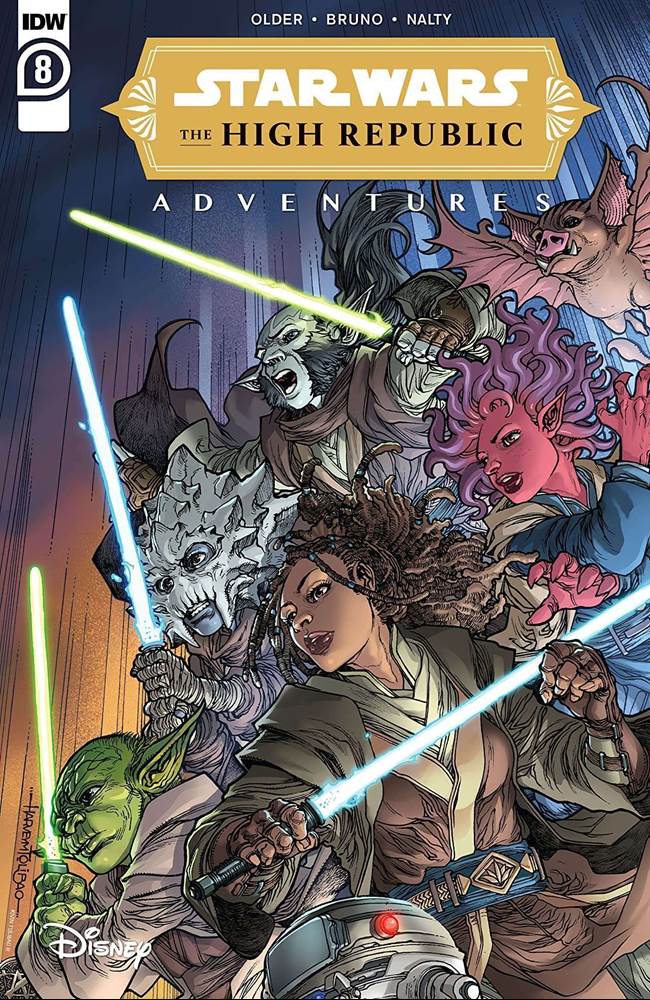 The High Republic Adventures #8 starts off with two groups of Jedi Padawans returning to the Starlight Beacon space station after their travails on the planets Valo and Nal Hutta. Old friends reunite and new ones are introduced to the group (including Ram Jomaram from author Daniel Jose Older’s middle-grade book Race to Crashpoint Tower and Ishnar Ti-Kharatal from Skarabda the Hutt’s palace), and a briefing is held to discuss the next phase in the Jedi Order’s defense against the Nihil menace. Meanwhile, we check in with Krix Kamerat as he continues to bond with Nihil leader Marchion Ro, receiving orders to attack the planet Takodana– yes, where Maz Kanata’s castle resides in Star Wars: The Force Awakens. Maz has been name-checked in The High Republic previously (namely in Justina Ireland’s young-adult novel Out of the Shadows) but we haven’t actually seen her pop up yet, nor do we get to in this issue, though I feel like she might show her wrinkled 700-year-old face anytime. Fortunately, Takodana is protected by a particularly badass Kyuzo Jedi named Sav Malagan, who wipes the floor with the invading Nihil forces without even breaking a sweat. Back on Starlight Beacon, the Jedi play catch-up and recap recent events in The High Republic’s timeline, including the death of Loden Greatstorm at the climax of Cavan Scott’s novel The Rising Storm and the worrying disappearance of Master Yoda.

Upon hearing about the attack on Takodana, the Jedi vow to assist their allies on the planet, though the Force-sensitive non-Jedi Zeen Mrala is questioned about her ability to confront her former companion. Zeen insists she is willing and able to rise to the challenge, while we see Krix regrouping with his Nihil squadron and readying a second attempt on Takodana’s Jedi Temple. I’m pretty sure we don’t see that building overlooking Maz’s castle in The Force Awakens— though obviously we know Maz herself survives, not to mention her hideout– so I suppose the outcome of this upcoming battle could go either way. Regardless, this issue did a great job of kicking off a fresh arc under Older’s skilled plotting, and accentuated by the somewhat more cartoonish (but not unpleasantly so) illustrations by new artist Toni Bruno, who has previously made a name for himself in the Italian comic book scene. One of the great things about The High Republic is how interconnected everything feels so far, and this issue is no exception. With that in mind, I can’t wait to see how the conflict on Takodana reverberates through the rest of this highly ambitious project. 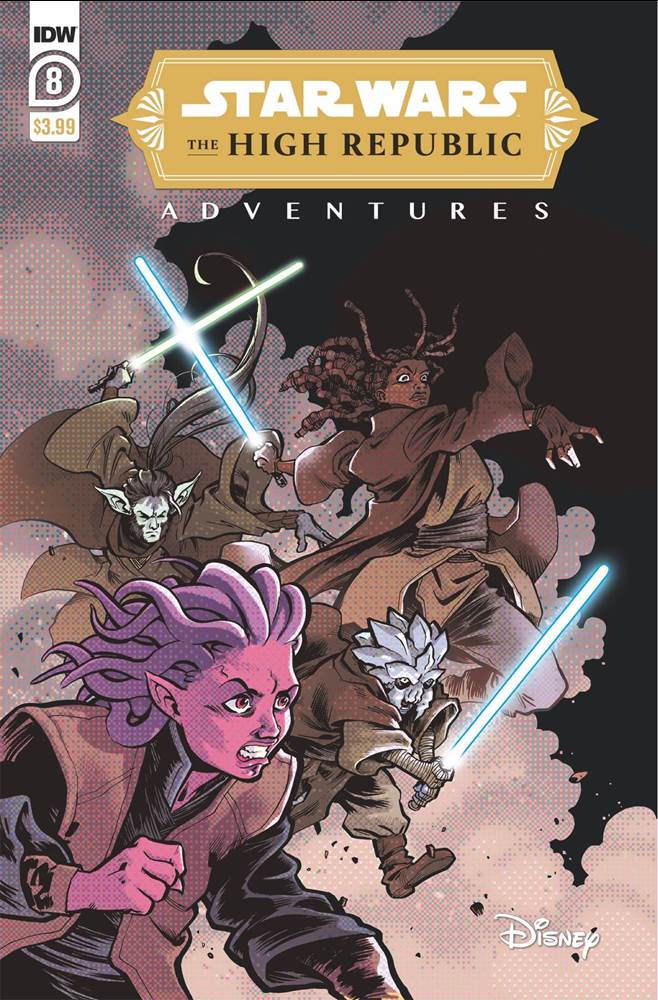