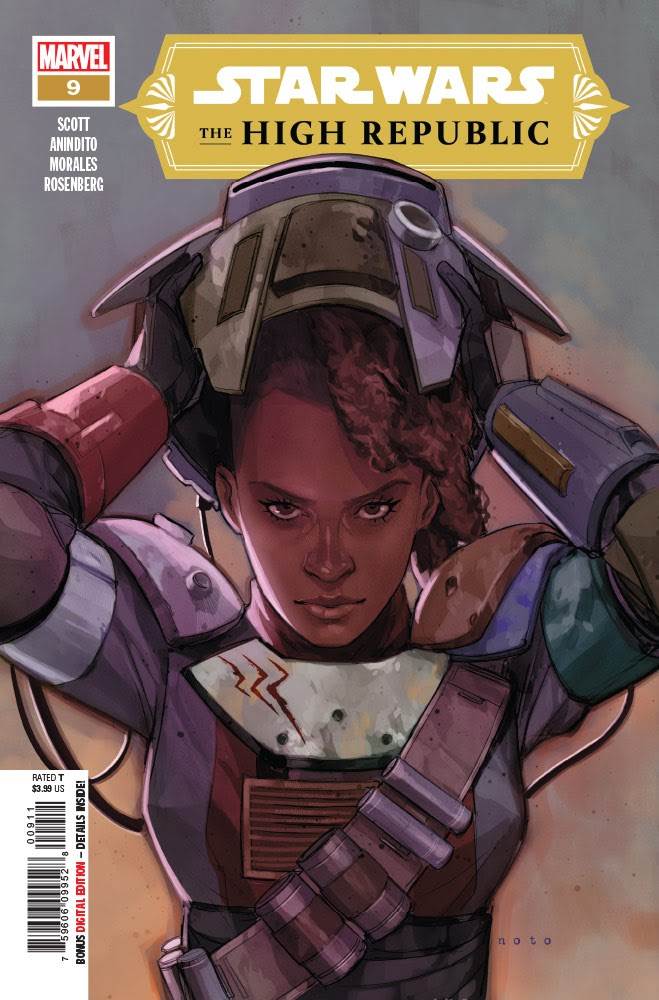 This comic takes place just after the beginning of Tempest Runner, with Dee presumed dead by the Jedi Order as they attempt to take a more active stance in their ongoing battle against the Nihil. But the Jedi stationed at the space station known as Starlight Beacon are put on a holding pattern by Council member Stellan Gios, much to the frustration of Marshal Avar Kriss and her companions in the Outer Rim. 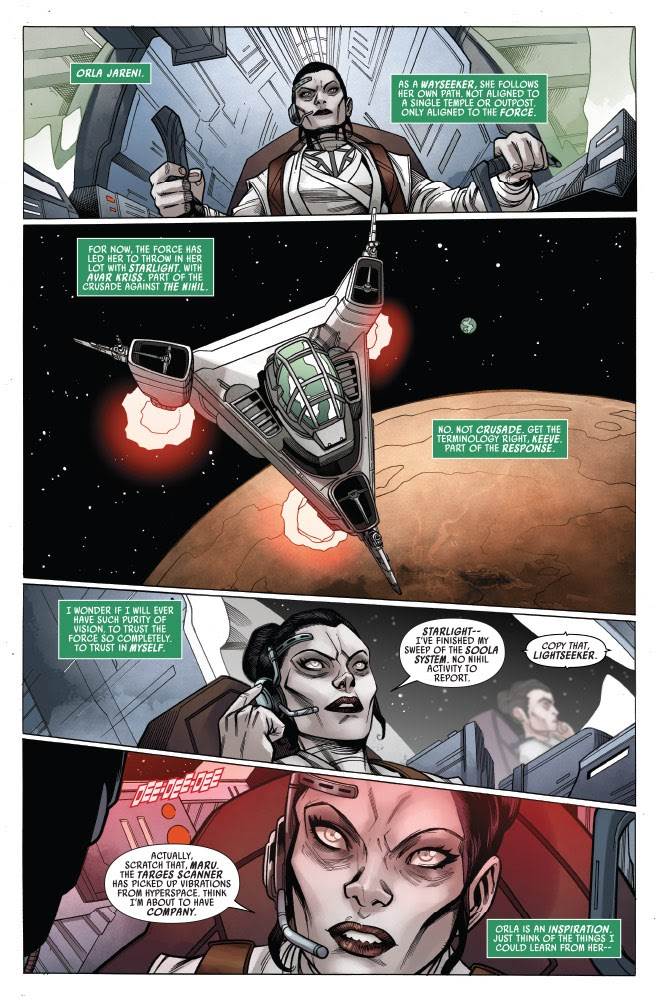 The High Republic #9 begins with a shocking in medias res opening space-battle sequence that sees Wayseeker Jedi Orla Jareni in combat against a Nihil stormship commanded by none other than Jedi Knight Keeve Trennis, who we’ve come to know as one of the central protagonists of this comic series. Why has Trennis seemingly given up the path of the light to join the Jedi Order’s sworn enemy? We’re immediately given a series of flashbacks to explain how these characters got to that point, though I won’t spoil the eventual reveal in this review. Suffice it to say that we do get an explanation pretty much right away (I was afraid we’d have to wait until next month, or worse yet the end of this arc) and the action continues in the “present” as more Starlight Jedi– including my favorite, Master Skeer– show up to defend Jareni from the perceived Nihil attack. Then we follow Keeve and her apparent deserter-in-arms Terec to a Nihil base where she makes contact with the local leadership of her new faction. But as I hinted at earlier, things may not be quite exactly what they seem, but I’ll let the comic itself tell you the whys and hows if you choose to read it. 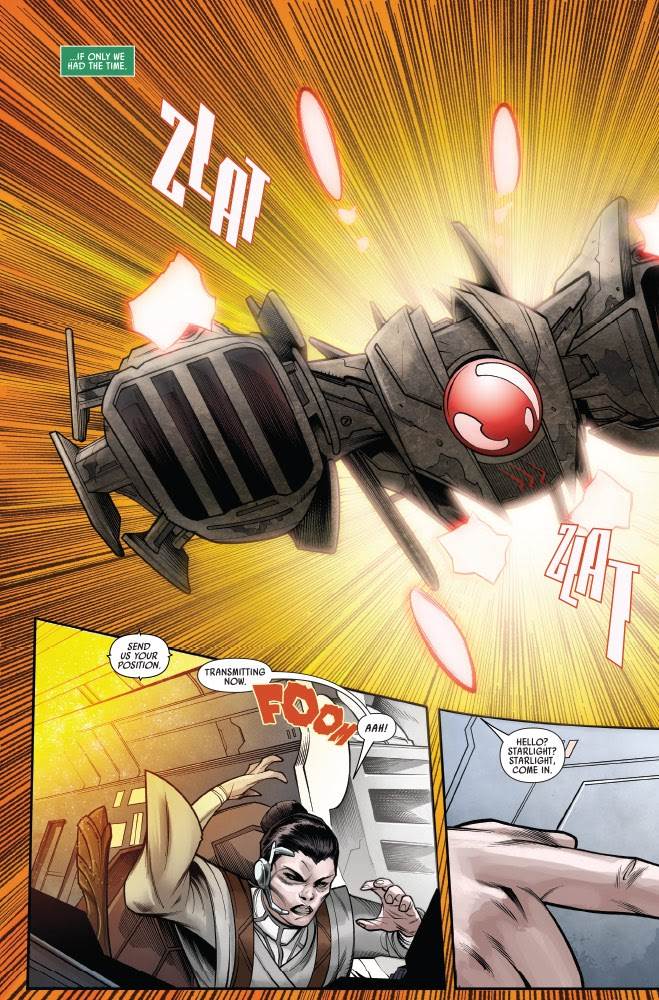 And choose to read it you definitely should, because as has been the case since issue #1, Cavan Scott has delivered another supremely entertaining thrill ride with terrific artwork by Ario Anindito. Despite the somewhat telegraphed resolution to the issue’s big mystery, its twists managed to keep me guessing throughout, and I loved how the Jedi’s infighting represents a fissure starting to develop among the Order’s ranks as the Nihil continue to get under their skin. There are also some great-looking villain designs (including a Crolute and a Mech-armored Talpini, two alien species I don’t think we’ve seen before in The High Republic) once we get to the Nihil base, and a cliffhanger that I can probably guess will turn out okay for our heroes, but still present a near-unwinnable situation for anyone striving to follow the Jedi code. Scott’s Tempest Runner audiobook has successfully persuaded me to become more invested in the Nihil as antagonists, and that enjoyment has followed through to his comics, where I’m looking forward to finding out what happens to Keeve Trennis as she immerses herself in the marauder band’s lifestyle and strategies in future issues. 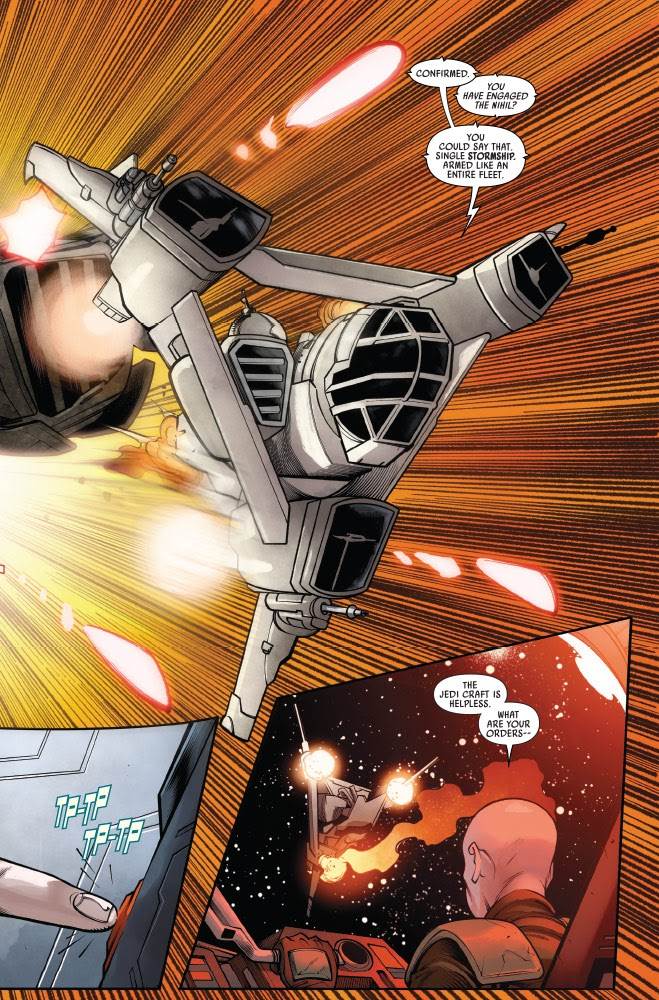 Star Wars: The High Republic #9 is available now wherever comic books are sold.