Robert Langdon, the fictional character created by author Dan Brown and portrayed by Tom Hanks in The Da Vinci Code, Angels & Demons and Inferno. Appearing in five novels to date, producers Ron Howard and Brian Grazer have reunited with Dan Brown, this time in an episodic television series to adapt Dan Brown’s The Lost Symbol, now streaming exclusively on Peacock. Members of the cast recently joined the producorial team at the TCA Summer Press Tour to give insight into this exciting new project. 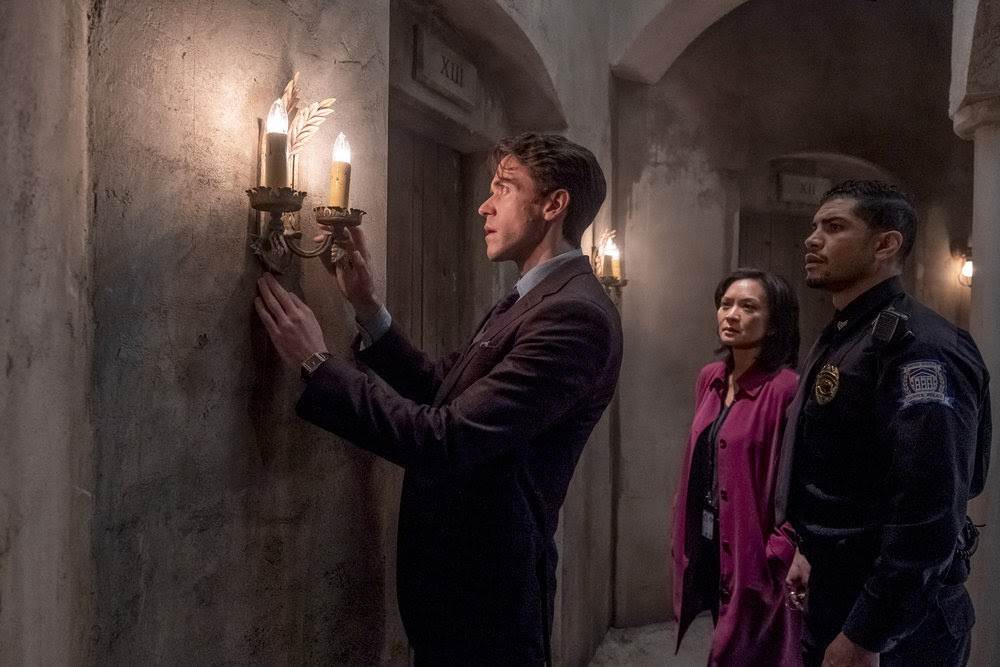 “The bones are all pretty much intact,” showrunner Dan Dworkin revealed about how closely the series adheres to the novel. “It gave us a great framework and skeleton for the season. There is a lot of stuff from the book that people who have read the book are going to be glad to see, and there's maybe a couple things that were in the book that they are going to miss. But, by and large, the moves are very similar, but when you have to fill out ten hours, it is incumbent upon you to make up a lot of new stuff. So we have filled in a lot of stuff that was left somewhat open in the book, and we've created a couple new characters, and we've created new backstories.”

One of the new characters is Nunez, portrayed by Rick Gonzalez. “I can't say much except that we know he's a Capitol policeman, and the circumstances are obviously that he's now thrust into a world that he knows nothing of,” the actor shared, explaining that in many ways, his character’s perspective mirrors that of the viewers, being on the outside of the mystery. “What I love about Nunez is this idea of a character sort of being the audience and giving that perspective in the room. I'm excited for people to get to know Nunez, it's been a real treat.”

When you step into a role portrayed by a screen legend like Tom Hanks, it’s understandable to feel the gravity of the situation, but that wasn’t top of mind for Ashley Zukerman, who portrays Robert Langdon in the series. “I was just genuinely honored to have been chosen,” the Zukerman explained. “I know this is material that just means a lot to people, and to have been chosen to join that family was just a big thing. I think something that helped me not feel that pressure was that even though this is the third book of the series, we are using it as an origin story.” Using Dan Brown’s book as a guide, Ashley Zukerman studied the text to portray a younger Robert Langdon, one who could conceivably grow into the character audiences are familiar with from the film series.

With a worldwide box office gross of nearly $1.5 billion, the film trilogy has been so successful that fans were likely expecting The Lost Symbol to become a feature rather than a series. “As we see right now, certainly in our modern cinema or video, that cinematic form just takes size and shape differently all the time,” Briand Grazer said. “We found that the character was so strong that the character and his journey actually warranted and sustained itself as a series as opposed to a movie… It has more propulsion in a serialized form as a series, actually.” Grazer also expressed his gratitude to the writers and showrunners. “Ron [Howard] and I feel so fortunate, and so does Dan [Brown].”

Actress Sumalee Montano, who plays Inoue Sato, echoed similar sentiments to the rest of the team. “What a great experience this has been for me working with this cast and crew,” she praised. “Everybody just pours themselves into creating the best show possible, and it's been an amazing experience, an amazing ride, and I hope that people will really respond to the show. I think we have a really fresh take for this franchise, and I'm super excited for it.”

The premiere episode of Dan Brown’s The Lost Symbol is now streaming exclusively on Peacock. New episodes will debut on Thursdays.