Big City Greens is back for their 3rd season, and the season is kicking off with their second Halloween episode providing the antics the show is known for right out of the gate. 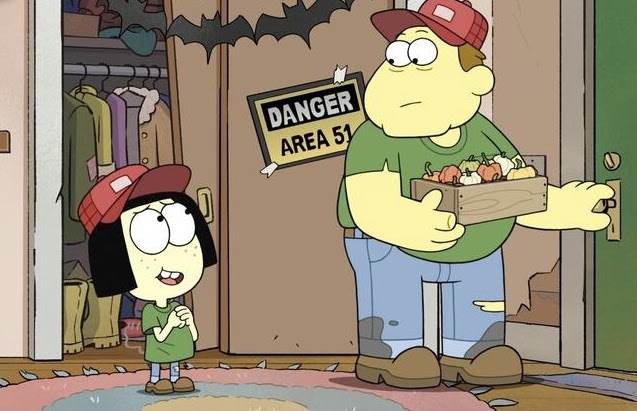 The Greens are getting ready for their big Halloween party, which unlike last year, is set to be just good ole’ fashioned Halloween fun. Last year, a blood moon caused all the farm animals to go crazy in an entranced haze. But not this year, this year will be different! Meanwhile, on Mars, Gwendolyn Zapp is operating a lab trying to grow vegetables on the planet using new formulas…but they clearly have gone haywire and are taking over. Zapp leaves her assistants behind…possibly to their doom, and decides to continue the experiments back on Earth.

At the Green house, The Greens continue to get ready for the party with Cricket dressed as the clown “Trickor” and Tilly dressed like her old man. Bill shows off this year’s pumpkin haul, which to say, is quite disappointing. Bill and Tilly go out to deliver their fresh veggies and devotees may recall that Zapp is one of their frequent customers. They arrive and Bill’s pathetic veggies are the perfect subject for Zapp’s new otherworldly Compound 415C. Bill is hesitant, but Tilly wants her dad to be happy with his vegetable haul and takes some of the compound.

They get back home where Remy and Vasquez have also arrived, and Tilly sneaks off to pour the compound on some of the pumpkins so that pumpkin carving can be great this year. The pumpkins grow instantly and Tilly is satisfied with this “end result” but as she goes back inside, the vines of the pumpkins start growing ominously, heading towards the party guests inside.

Bill heads outside and sees the pumpkins and is awfully pleased, thinking the secret to their growth was farming with love. As their back is turned, one of the pumpkins goes missing but Tilly and Bill bring them all inside anyway. Benny, making his first appearance for the season, points out that one of the pumpkins is making a scary face at him, and Cricket is overheard screaming in the distance saying a pumpkin got him. Spoiler alert: Tilly got “Trickor-ed,” pranked by her brother’s clown character.

As they are laughing about it, that’s when a real pumpkin comes to life and is crawling towards them ready to attack. Tilly reluctantly tells Cricket and Remy what she did, and asks them to help her cover the whole thing up, and you know, save everyone at the party. As they try and shut the shindig down, Community Sue stands up saying she came to the party to get “Freakynasty” on the dance floor and that’s what she’s going to do. Then, one of the alien pumpkins leaps and latches to her head and everyone panics. Turns out, the pumpkins latch on to the human hosts, and nobody is safe as the pumpkins take over the party, as well as the guests. Gloria walks in, a victim of the animals of last year arrives on scene just in time to have the pumpkins tie her down with their vines and attack…as she put it… “just like last year!”

Tilly follows the vines to an ominous glow and finds her dad trapped in an alien pumpkin nest. She frees him, allowing that heartfelt moral of the episode to shine, coming clean that she stole the alien compound to make him happy and did it all behind his back. Vasquez, who earlier in the episode was told all the Halloween fun was fake and to stay at ease, is now aware that it’s all too real and the group goes to smash the pumpkins, freeing their human hosts.

Tilly discovers that all the pumpkins respond to one main queen and if they take that pumpkin out, then the rest will all stop attacking too. So, using some help from her trickster brother, the two team up and bait the pumpkin queen while Tilly destroys it with a tractor. Another heartfelt moment between Tilly and Bill, with the pair apologizing to each other when Zapp crash lands ready to take out the alien veggies but realizes it's already taken care of. “My B!” She exclaims as she monologues explaining the alien goo was responsible for the possible takeover of alien overlords through pumpkins.

The season premiere and special Halloween episode of Big City Greens is now available on Disney Channel and the DisneyNOW app.