Molly Mcgee’s influence on the town of Brighton is starting to grow as she helps rebuild the town’s landmark bandshell and hosts the greatest concert ever in it in the latest episode of The Ghost and Molly McGee. 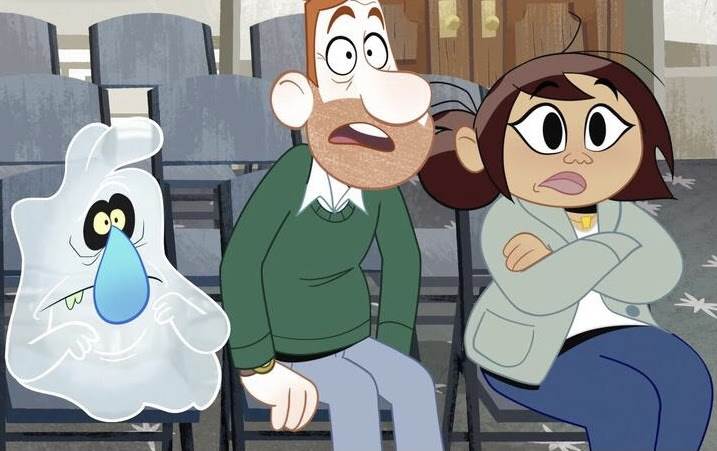 Getting the Band(Shell) Back Together

Molly McGee is rounding up the family to do some good ole’ fashioned community service and tricked Scratch into thinking that they were just going to get tacos. Which is kind of strange if you think about it since he cursed himself to be attached to her wherever she goes and whatever she does….but I didn’t write the show.

I digress. The group is volunteering at a nursing home where Sharon is teaching a senior aerobics class and Pete is taking suggestions to bring to his city council meeting. Molly meets Patty, who has lived in Brighton her whole life and jokingly tells Molly that they made a mistake by moving here.

While reminiscing about the town, Patty points out the city’s former bandshell and telling happy stories, and explains that a tornado blew through town and destroyed it years ago. Molly is inspired to somehow bring the bandshell back and we see her pitch an idea for a 60,000 seat arena during her dad’s town council meeting and is told that they love her creativity, but that arena is not feasible.

BUT WAIT! Molly opens the arena model to show a more reasonable model of a brand new bandshell that she baited and switched the council into hearing about. However, even that model is rejected as the town simply doesn’t have the money to build it.

This inspires a campaign (and song!) that sees Molly and her brother head door to door through town fundraising for a new bandshell. Even Scratch attempts to help by robbing a credit union. That money is returned but the rest is kept and it’s enough to build the bandshell but not enough to cover the labor.

Molly pitches a community work day and spreads flyers to help get the bandshell built, but also so she can perform her “told you so” dance for Scratch who keeps telling her her ideas aren’t going to work. As the McGee family waits for more people to help, it seems all is lost when the residents of the nursing home come to help. Libby and the rest of the softball team walk by and pitch in as well.

While the mayor asks “Who’s going to play” in the new bandshell, I can’t help but think about that moment we saw in the first episode where the ghost responsible for the misery of his town was sent into a wild dimensional vortex, and Scratch’s own Misery meter improved just a bit when Molly arrived in town.

The Greatest Concert Ever

Using the Mayor’s question as a perfect segue into the next half of the episode, we now see who gets to perform at the new and improved Brighton Bandshell, and after a series of failed auditions, Molly has her eyes on Kenny Star, a country music celebrity who is on his way to perform in Cleveland, and plans to intercept him at a highway rest stop and plead with him to perform in their town. After all, McGees go the extra mile. One town resident has heard the news and the gossip mill takes over and the town quickly hears the news that Kenny Star is on his way to perform in their town. The family successfully catches up with his bus and Molly asks him to embrace his Brighton roots, and he loves the speech. Problem is, that’s not Kenny Star, it’s his stunt double that travels via bus to keep the appearance of an “ordinary man” while he travels in his own private jet.

Scratch sees how heartbroken Molly is over the whole situation and tries to quell his feelings and tries to fix it and takes off into the sky trying to catch up with the jet but fails. From high above, he comes up with Plan B and spots another tour bus heading towards Cleveland, and flies down possessing the driver and steering them directly into the new Brighton Bandshell.

Residents are ready for a performance by Kenny Star when the bus door opens and reveals the group, Atomic Pink, who take to the (surprisingly small for Cleveland) stage. Daryl shouts out exactly who they are and the crowd erupts, with Molly’s brother even jumping on stage and performing alongside them.

Molly thanks Scratch for going the extra mile, which makes him an official McGee, but Scratch refuses the title, saying he’s more “McGee-Adjacent.”

This episode of The Ghost and Molly McGee is now available on the Disney Channel and the DisneyNOW app, as well as Disney+.