The latest episode of The Ghost and Molly McGee shows the financial struggle of the McGee family as well as the affluent nature of the Andrea and the Davenports. 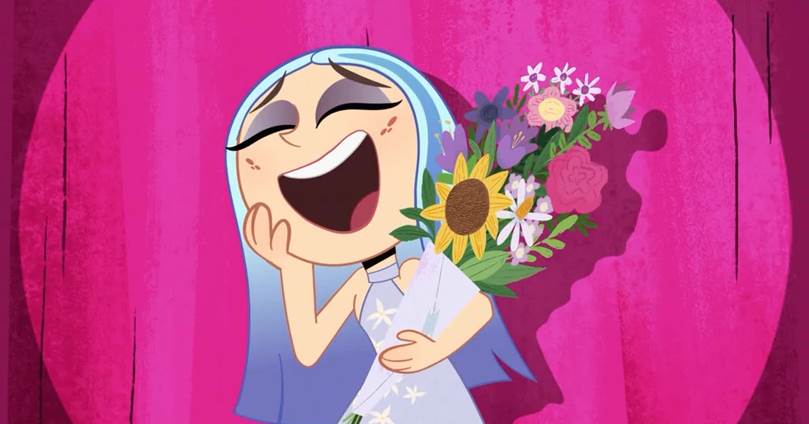 Molly and the McGees are driving home from getting supplies to clean the basement of their new house when their car suddenly needs a repair. Ill timed, of course, since Scratch is upset that the McGees are taking over his house and making it their own, and he threatened them just before. All is good though, except for the McGee’s finances. Between the van situation, moving into a new home, utilities, and credit card debt, the McGees are stretched to their limit and Sharon needs to start working again.

But where to begin? A diner is hiring but Mama McGee refuses to ever work in food service again since she grew up working in her parent’s restaurant. Molly steers her toward an app that gets her odd jobs and gigs real quick to raise the cash fast. While we see Mom and Molly going through all the gigs, we also see Pete and Daryl cleaning out the basement, discovering a nest of centipedes along with a secret door that they decide to try and open after Daryl suggests that there could be a whole world of centipedes behind it, or at least something that might help the family with their finances.

While Molly and Mom are cleaning up after Buffaloes in one of their gigs, we find out how much they have and it's time for a musical montage as we see more gigs, and more attempts to open that secret door in the basement.

Daryl and Dad have created a machine out of found parts in the basement and are ready to take down the door. Molly and Mom did it and raised enough money for their van repairs when they got a call from Dad. The water heater has been destroyed by their attempts to get through the secret door. But they’re not going to tell her that.

Mom realizes the financial trouble hasn’t ended and with a rekindled enthusiasm for working, decides to keep “gigging” to keep money coming in for the family.

It’s McGee family movie night, and they are going to watch the scariest movie around…that turns out…wasn’t even scary. Scratch is even offended by the stereotypical portrayal of ghosts.

Molly realizes they have a real ghost, Daryl can use the camera on his phone, and Libby can write a script so they can make the actual “scariest ghost movie ever.”

Out in the softball field they begin production (with a musical number and montage of course), even though most of it was filmed in Selfie mode. Scratch is even disguised as a cousin of the family, Carl, wearing a (rather stereotypical, if you ask me) sheet like a ghost. After they get kicked off of the softball field, they run into Andrea Davenport, who already has some acting gigs under her belt. Scratch (and now the audience) knows exactly where this is going and Andrea is recruited to help them with the movie, and brings in her family’s department store as a sponsor and they have real sets, real cameras, real props and everything to make a real movie. Even a Director’s chair with Molly’s name on it. Andrea goes off-script and plugs shoes from her parent’s store, much to Molly’s surprise. Andrea has plenty of notes, calling the movie “her” vision and also throws Daryl off the project, and eventually Libby as well.

Libby yells at Molly, saying that she sold out for the sponsorship and the chair with her name on it. As Molly defends her morals and her chair, Andrea shows up with family friend, critically acclaimed director Greta Gerwig who takes over the project.

Molly realizes this isn’t the project she wanted at all and let’s Scratch do what he wants and go full ghost, terrorizing the set, crew, and Andrea. He even closes Greta Gerwig’s director’s chair while she is still inside it.

Disappointed that they didn’t get to see their movie, Molly apologizes to Libby when Daryl reveals they have some of the scary movie they set out to make thanks to the Behind-The-Scenes footage Daryl captured on his phone.

The McGee family movie night is the site of the premiere of their footage where the group watches Andrea and the crew get terrorized by a ghost, screaming, and eventually covered in fake blood in a scene reminiscent of Carrie.

Libby points out that she is impressed by Carl’s commitment to the role, pointing out that there aren’t any wires on him anywhere, when Molly quickly distracts her by showing off her name in the credits.

This episode of The Ghost and Molly McGee is set to debut on October 16th on Disney Channel, but is now available on the DisneyNOW app and Disney+.