It’s time for another attraction ranking. Following on from ranking up mostly everything there is to do at Islands of Adventure, we’re heading next door to Universal Studios Florida, where I’ll rank up everything in that park. This list will only include attractions I have experienced at the park. So while I have mostly everything covered, there are a few attractions missing. Okay, on to the list! 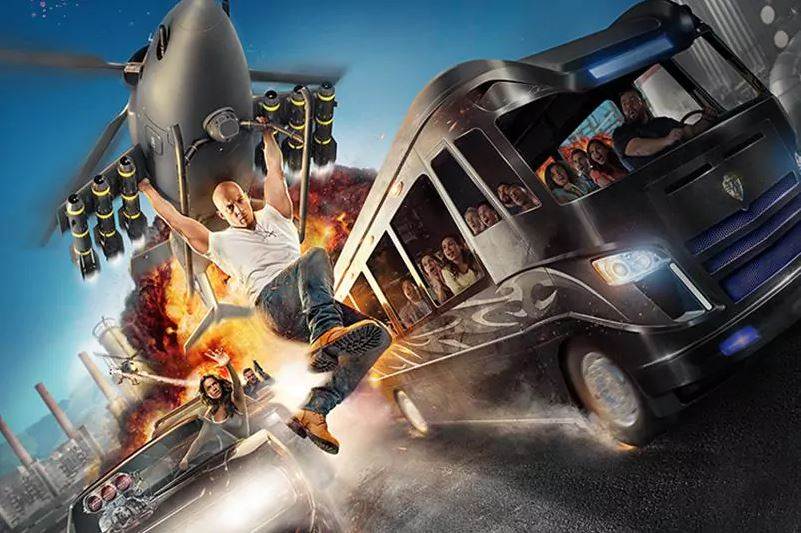 There may be a slim few people who disagree with the placement of Fast and Furious – Supercharged on this list, but I’d wager not many of you do. Following a string of successes over the last decade, this attraction is a sure misfire that really is a huge waste of space. The gigantic show-building takes up the former space of two different attractions, and really adds nothing to the experience (aside from two boring pre-shows) that you don’t get as part of the Studio Tour in Hollywood. The attraction only opened 3 years ago, but I’d already say that was 3 too many. It’s time for something new. 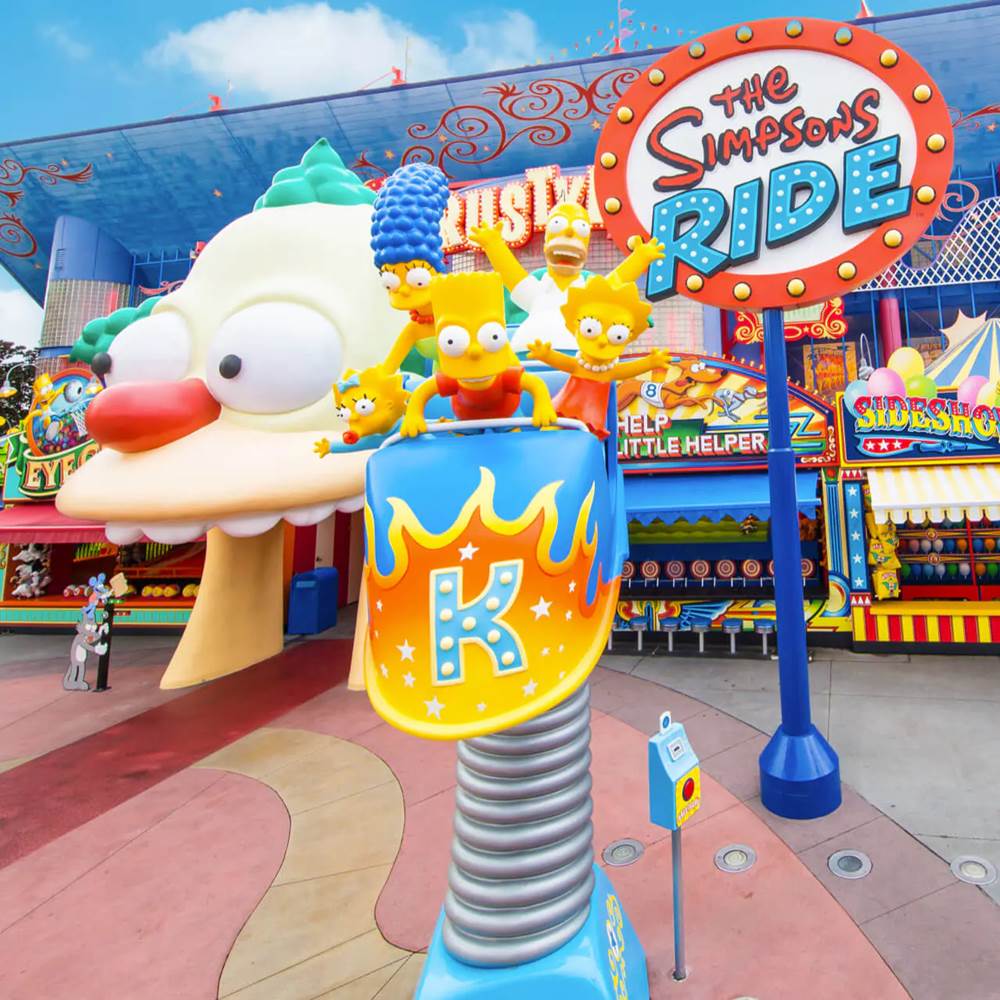 Speaking of time for something new, The Simpsons Ride is another that is long in the tooth. The Simpsons took over for Back to the Future back in 2008 and uses the ride system to a lesser effect. The relation between the movement of the ride and the screen always makes me a little dizzy, and I’m not one to get any sort of motion sickness. The Simpsons theme is a fun one and should be leveraged, but this ride either needs an upgrade or something completely new. 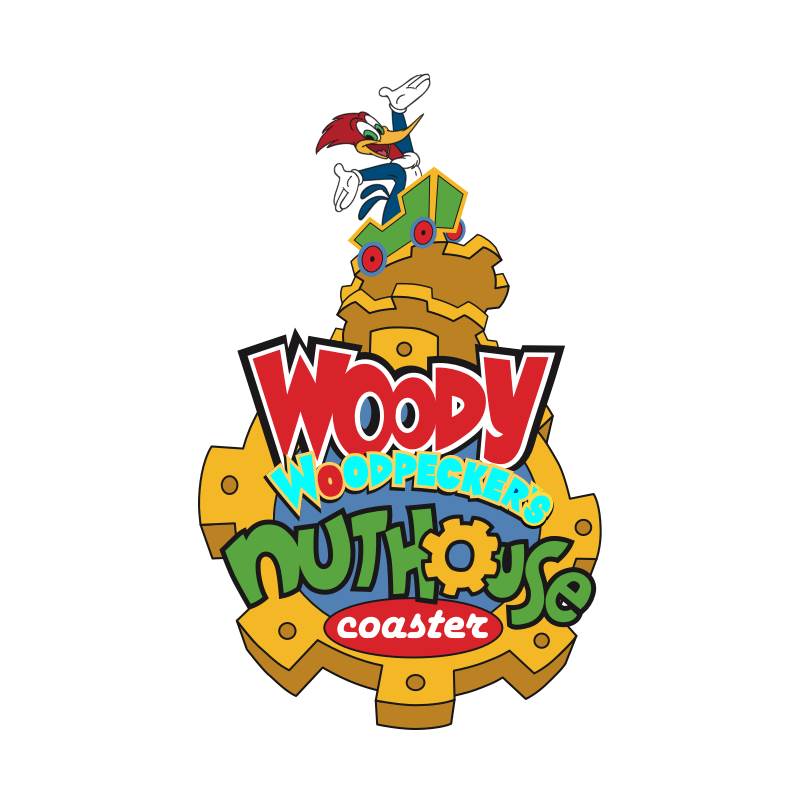 Woody Woodpecker’s Nuthouse Coaster is absolutely not a bad attraction, but is just a small kid’s coaster that you can find at many other parks, including an identical copy at Disneyland as Gadget’s Go-Coaster. The real theme behind a lot of the older attractions towards the bottom of this list is that they just don’t hold up as well today. Shrek 4D is a fun show that has been around for almost 20 years now, but feels very much the same as the three other theater/simulator shows in the same park. The film of Shrek 4D is very clever and fun, however, with lots of fun jokes and gags thrown in. Add to that the fun jabs at Disney through attraction posters in the queue, and you have quite the humorous attraction. If you’re a fan of Shrek 4D, you have until January 10, 2022 to check it out, for it will be closing forever on that day. 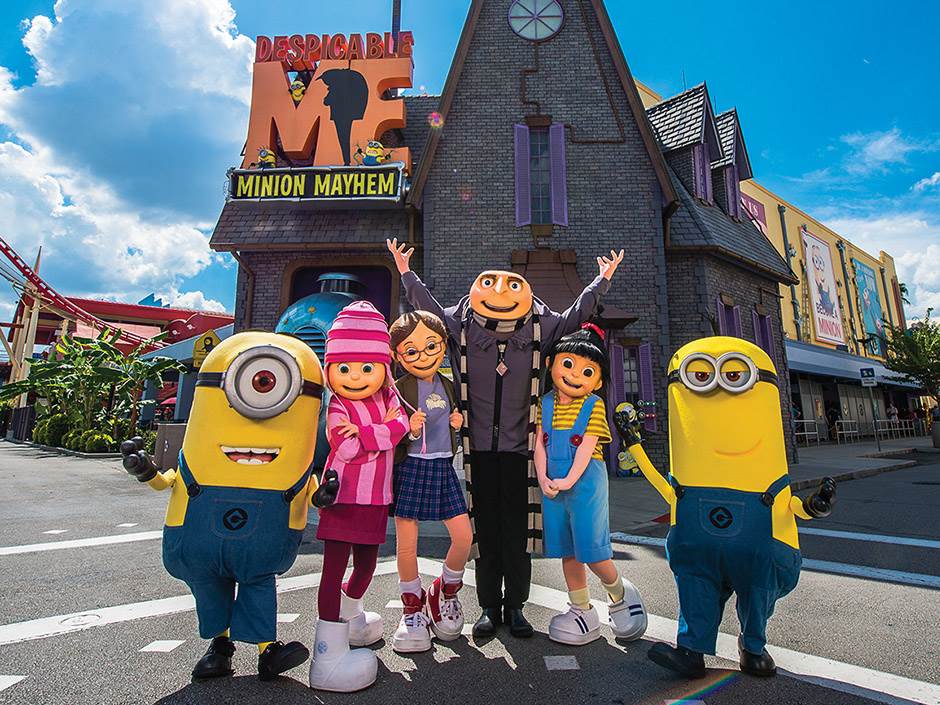 The Minions franchise is one that I’m not personally too familiar with, aside from riding this attraction. I think the ride does a good job in appealing to its target audience, but I personally find the characters a little grating. One thing the ride does have going for it is that the quality of the film and ride itself is a lot greater than the similar The Simpsons Ride on the other side of the park. 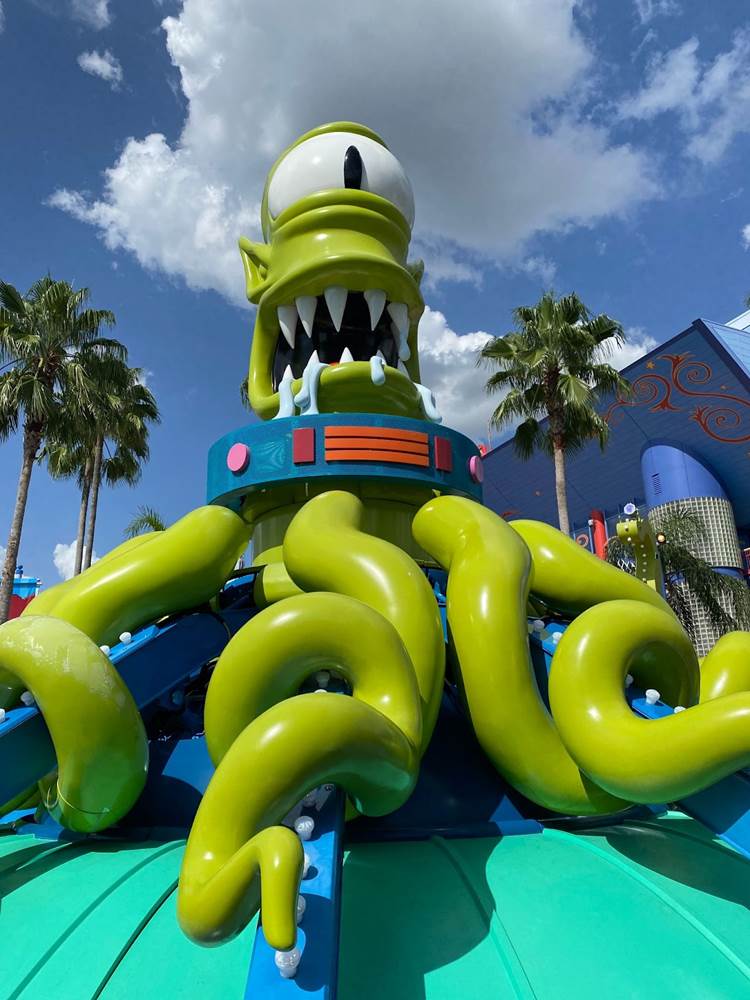 Much like One Fish, Two Fish, Red Fish, Blue Fish over at Islands of Adventure, this typical spinner ride has an extra element added to it, that of the commentary from the two aliens. The snarky comments as well as the ability to “knock over” the other Simpsons character’s portraits along the edge of the ride really makes this simple attraction just a little more interesting than it would be otherwise.

Fievel’s Playland is something that I’m really surprised is still around. Themed after the An American Tail series of films, this larger than life play area is actually a lot of fun. My favorite part is the dinghy slide that I kid-you-not, did not know existed until this past year. I know most kids probably don’t even know who Fievel is anymore, but that doesn’t stop the play area and the theming within being really fun. 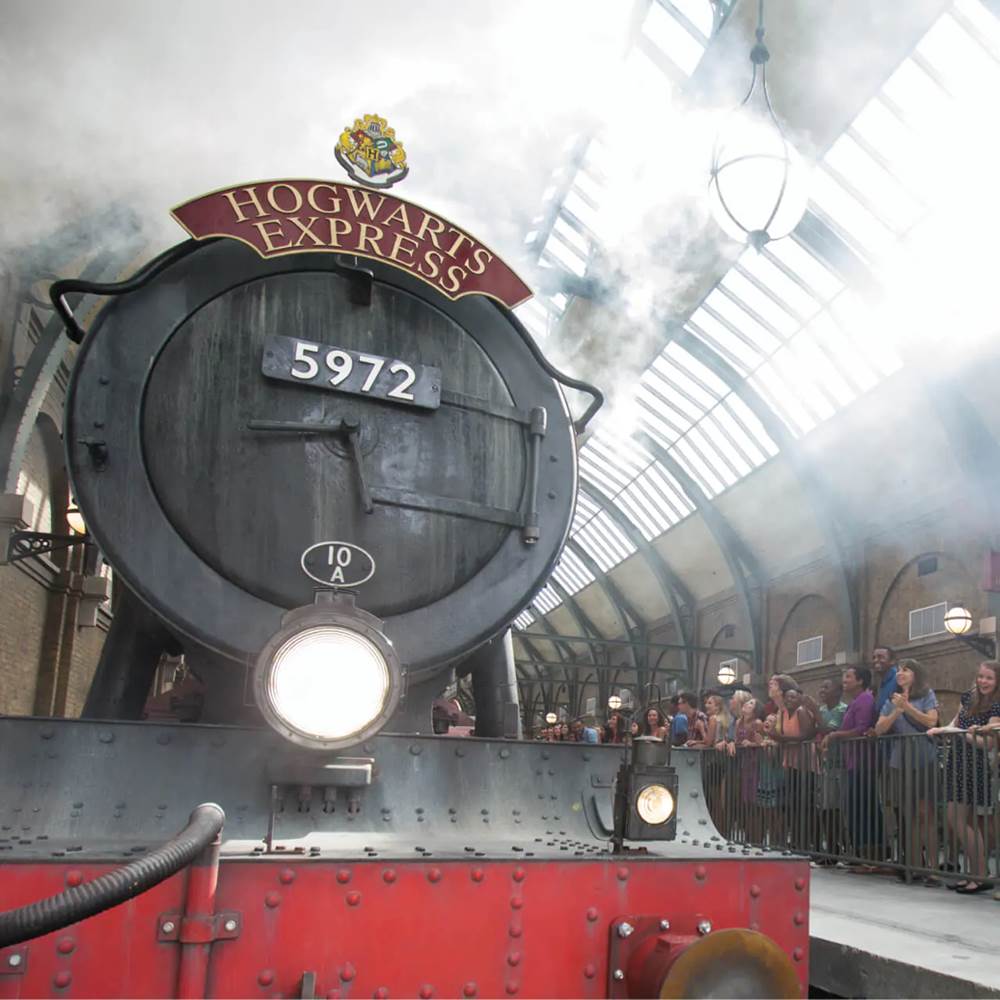 The idea of building the Hogwarts Express to connect the different Harry Potter themed lands in the two parks was a genius one. Both from a financial and a thematic standpoint. The journey itself doesn’t have much to it, but it absolutely puts you straight into the world of Harry Potter. One thing I really like about this half of the Hogwarts Express is the King’s Cross station itself. The station is an absolutely incredible recreation of the real life King’s Cross. 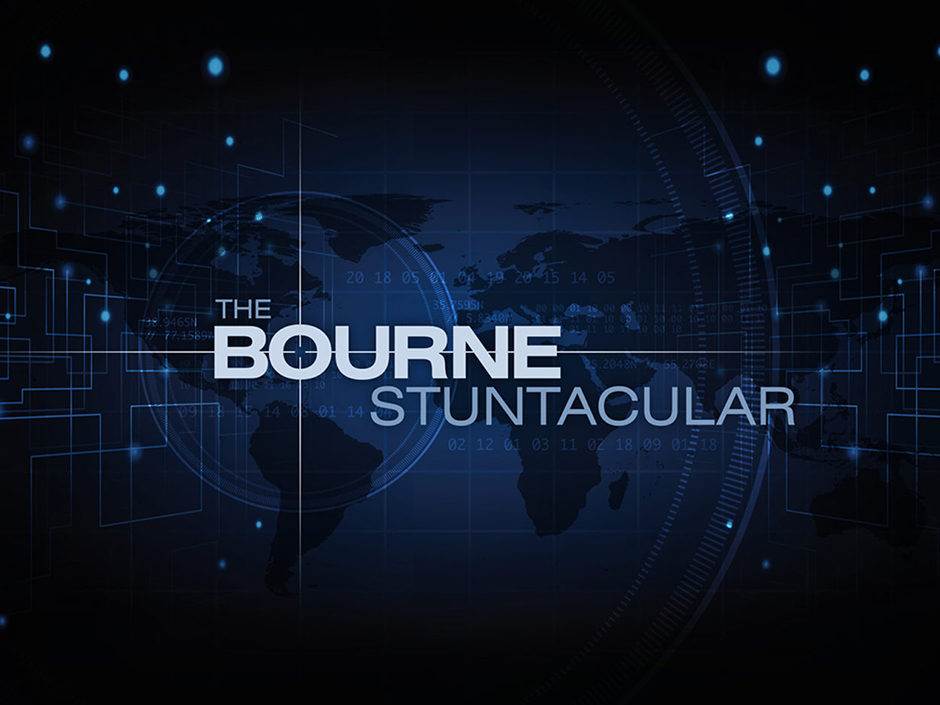 The newest attraction at Universal Studios Florida is The Bourne Stuntacular. Replacing Terminator 2 3D in the Hollywood section of the park, The Bourne Stuntacular is a modern, high-tech stunt show that stands up so much better than any other stunt type show in the Orlando area. I’ve actually never seen a single Bourne film, but I still enjoyed the show even without knowing the story. The technology and pacing of the show is enough to keep anyone entertained. 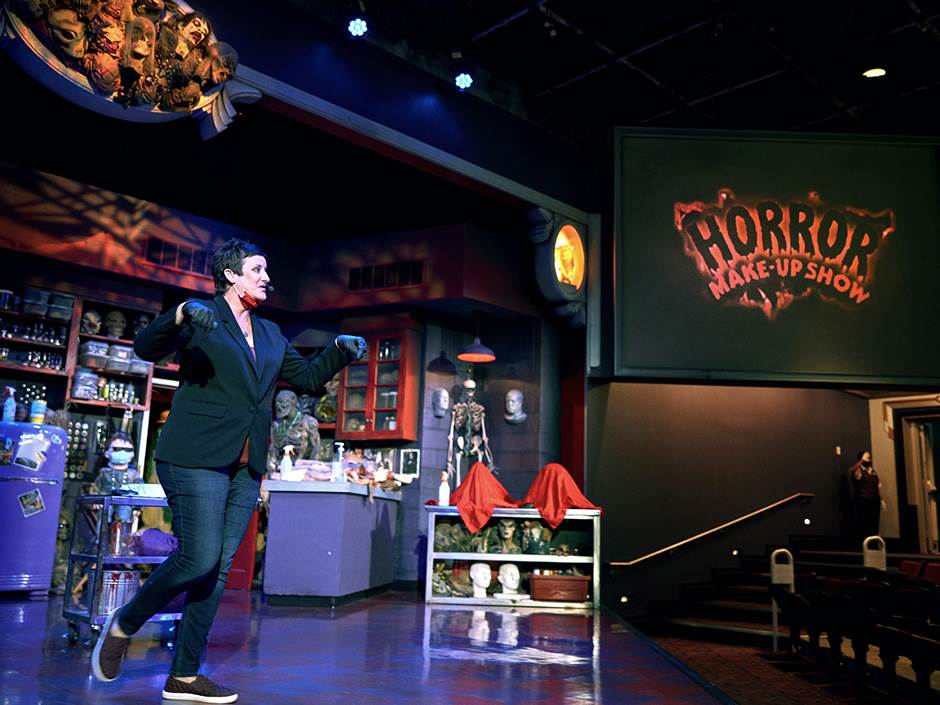 A Universal classic that has been around since the park opened back in 1990, the Horror Make-Up Show is classic Hollywood through and through. A fun, entertaining show that gives good behind the scenes information on make-up used throughout over 100 years of horror filmmaking. This is a true classic that needs to stick around for many years to come. 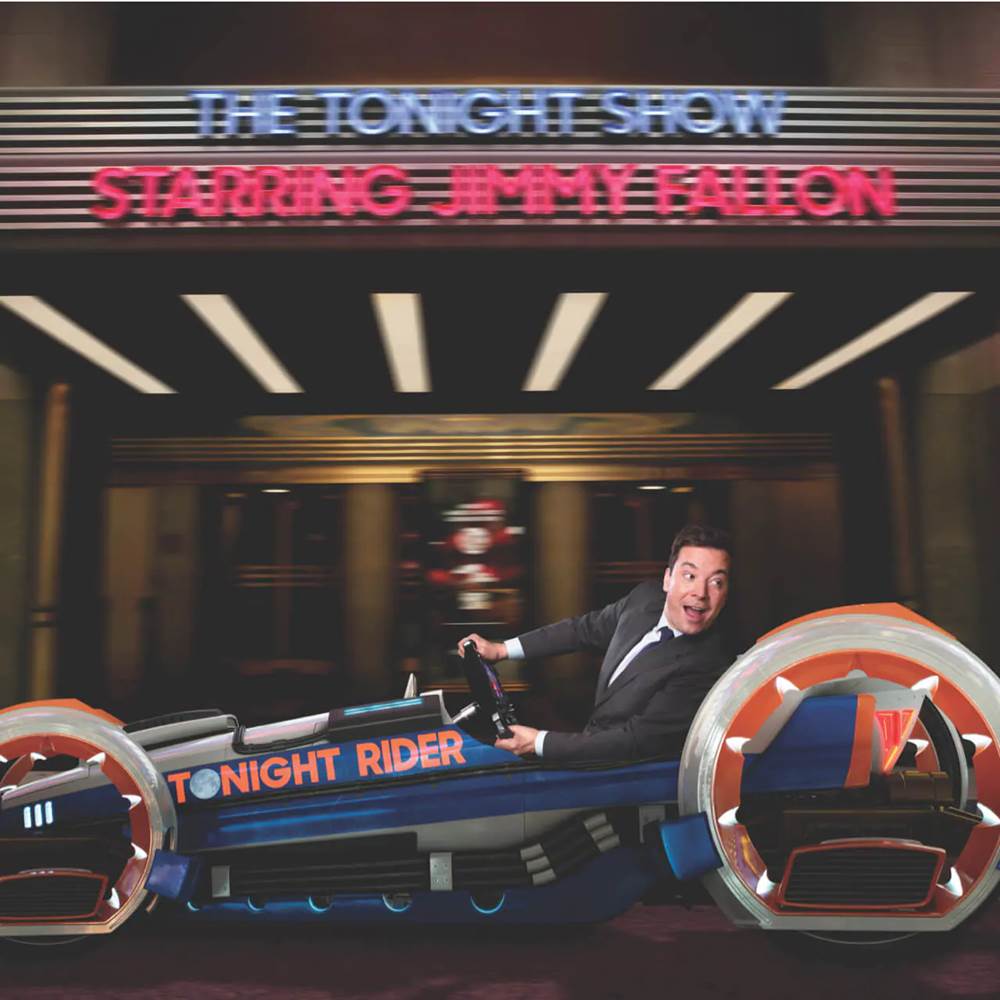 Race Through New York Starring Jimmy Fallon is the fourth of four very similar simulator based rides in the park, but this one is my favorite. The technology is the newest, which makes for the smoothest experience, and I enjoy the humor of The Tonight Show franchise. The queue for this attraction is also pretty impressive, with some well done NBC exhibits, as well as a waiting area opposed to a traditional queue, where you wait for your color to be called to head to the pre-show. This is the only attraction so far to implement a system like this, and I would honestly like to see it spread to some other attractions as well. Hollywood Rip Ride Rockit is a really strange coaster. One of the few Maurer Sohne X-Coasters in the world, this ride has quite a few quirks. Firstly, the vehicles are interesting, with heavy, but comfortable lap-bar restraints. There are a lot of brake runs in this ride, to allow for maximum capacity. While brake runs can ruin the speed and experience of some coasters, it actually leads to some good airtime moments on this ride. The most unique part of Rip Ride Rockit has to be the music selections. You can either pick from a series of predetermined musical choices or use a secret list giving more options. 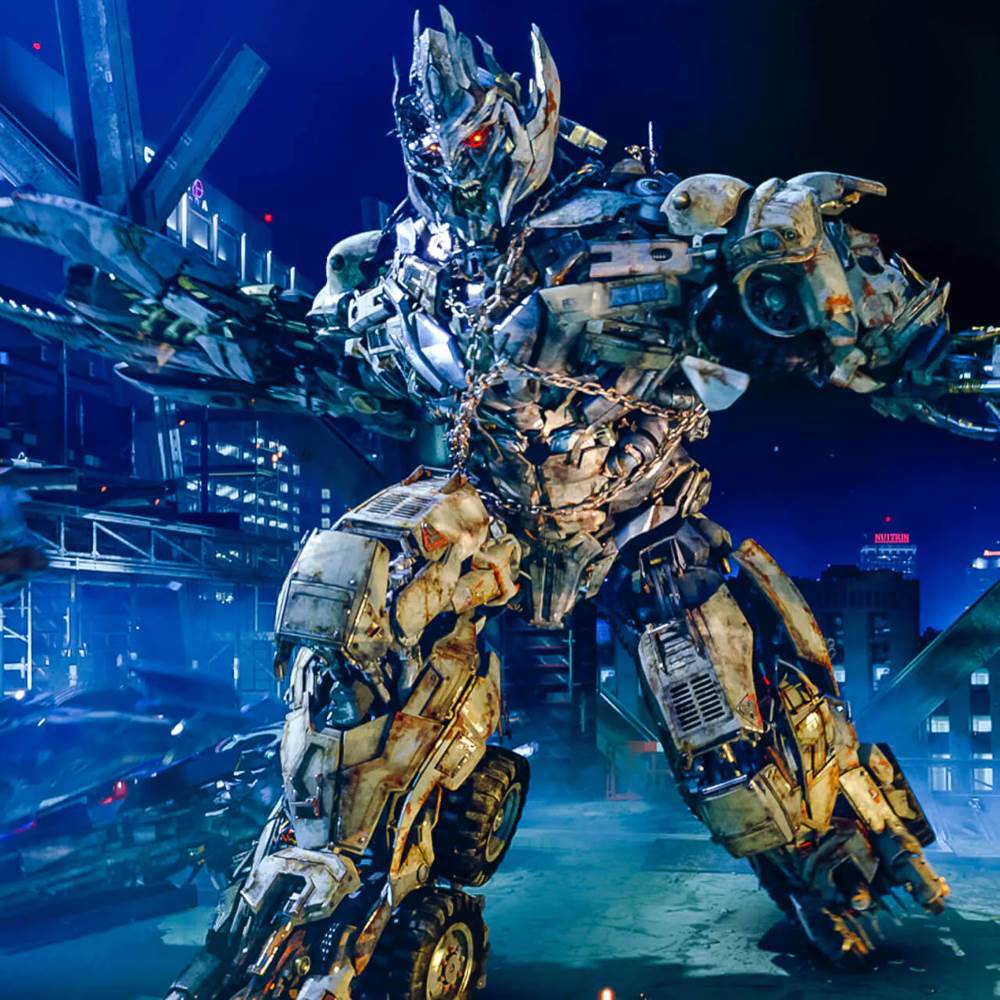 Transformers: The Ride is a fantastic ride based on a franchise I just don’t care about. It’s almost identical to, with the same exact ride system as The Amazing Adventures of Spider-Man next door at Islands of Adventure. While this is still a great attraction, I feel like it doesn’t do what it sets out to do quite as well as Spider-Man does. Now of course, that could just be me being more of a Spider-Man fan than a Transformers fan, but it is still an enjoyable ride. 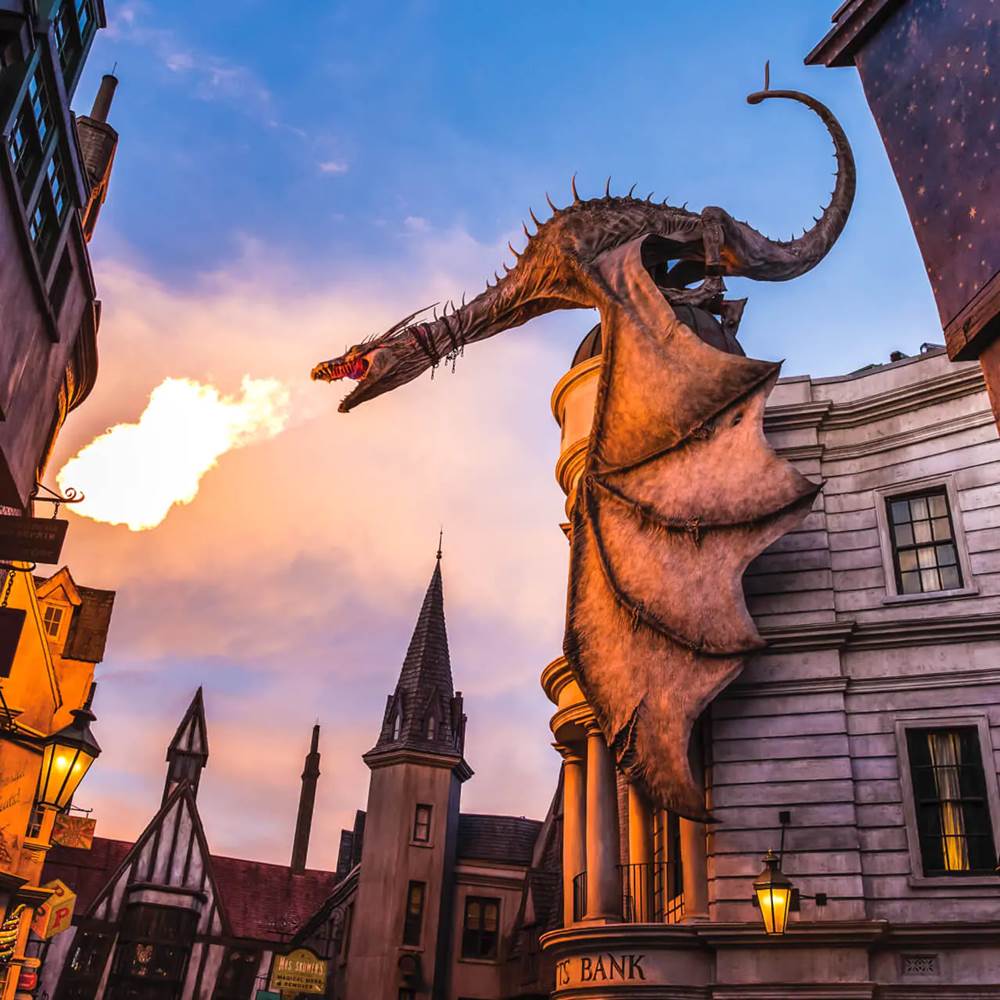 4. Harry Potter and the Escape from Gringotts

Out of the three major Harry Potter themed attractions, Escape from Gringotts is probably my least favorite, but that by no means it’s a bad experience. First off, the facade and queue for this attraction are absolutely stunning, especially that first step you take into Gringotts Bank. There are two pre-shows, the first kind of just sets things up for you, while the second is a fake elevator (a la The Living Seas’ Hydrolators) that takes you down to the vaults of the bank. The ride itself is an impressive combination of a Transformers type ride, with a roller coaster experience. Lots of cool effects, such as your cart disappearing into a hole in a screen and a tilting track moment really leave you on the edge of your seat the whole ride through. Men in Black Alien Attack sits at a weird crossroads in the history of Universal Orlando, somewhere between the original opening day attractions of 1990 and the modern rides we have today. Because of this, it kind of feels like a unique combination of the two. A truly unique attraction for Universal, being their only shooting dark ride, Men in Black Alien Attack features creative animatronics, and a fun ride system. My only complaint is that it’s sometimes hard to tell exactly where you are shooting. On a somewhat related note, this building has to have the best air conditioning in any theme park. All I have to do is be near the entrance and I can feel it. 2. Revenge of the Mummy: The Ride

Far superior to the Universal Studios Hollywood version of this ride, the Orlando version really throws everything at you. Things start off with a creepy dark ride-esque section, complete with animatronics, fire effects and scary statues popping up out of nowhere. That then leads into a thrilling coaster, with multiple launches, backwards moments, and even a fake ending. While it doesn’t necessarily fit the vibe of the attraction that well, the Brendan Fraiser coffee scene right at the end of the ride is truly iconic. 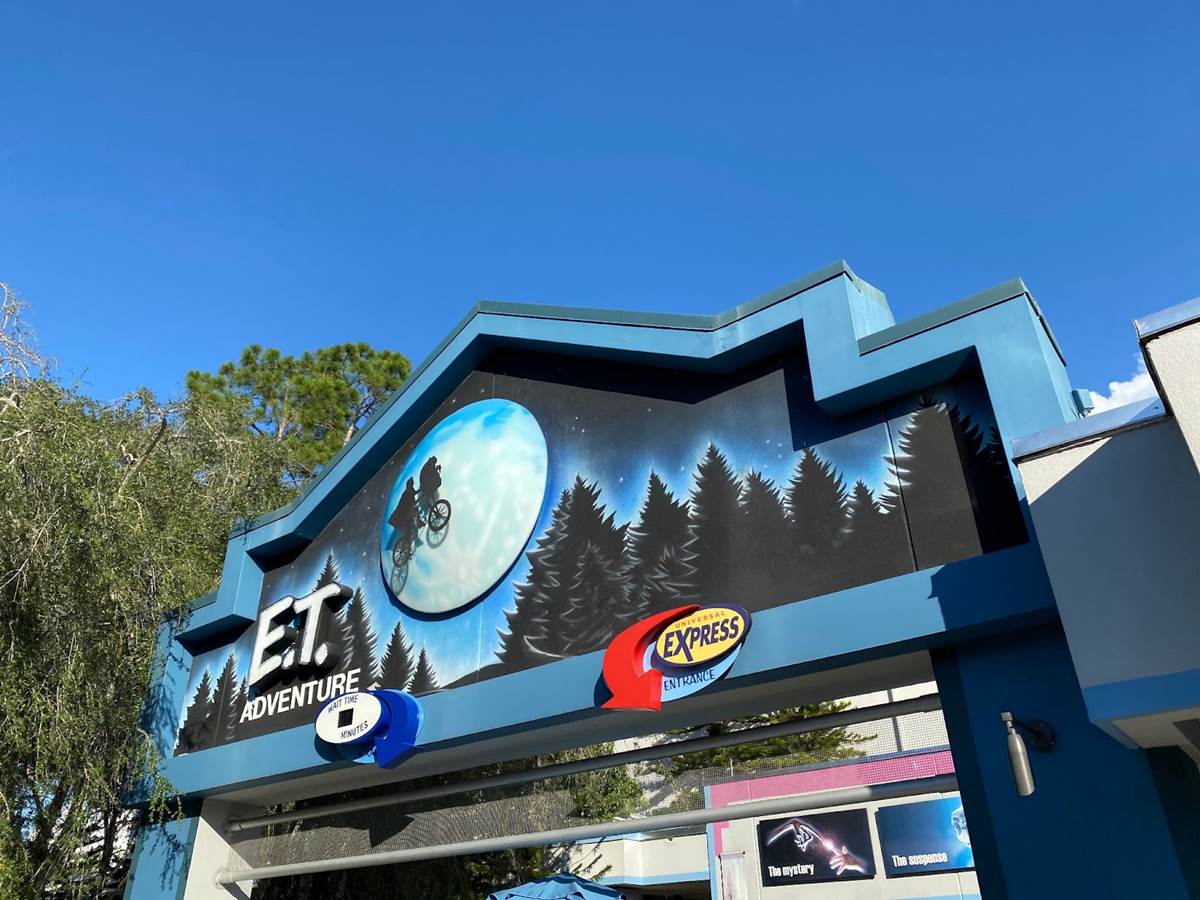 The only surviving original ride from opening day at Universal Studios Florida is also, in my opinion, the park’s best. The E.T. Adventure never fails to put a smile on my face. From stepping into the building and smelling the unique forest smell, to an incredible queue, to a truly iconic attraction experience, E.T. is classic Universal through and through. While the attraction has been removed from both Hollywood and Japan, it seems as if Steven Spielberg wants the original Orlando version to stick around indefinitely, and I’m sure glad he does. E.T. is a piece of history that should be preserved and enjoyed for generations to come.

I hope you all enjoyed this ranking of most of the attractions at Universal Studios Florida. Please come back soon for another ranking article!

Luke is a fan of all things theme parks who lives in Cypress, CA. 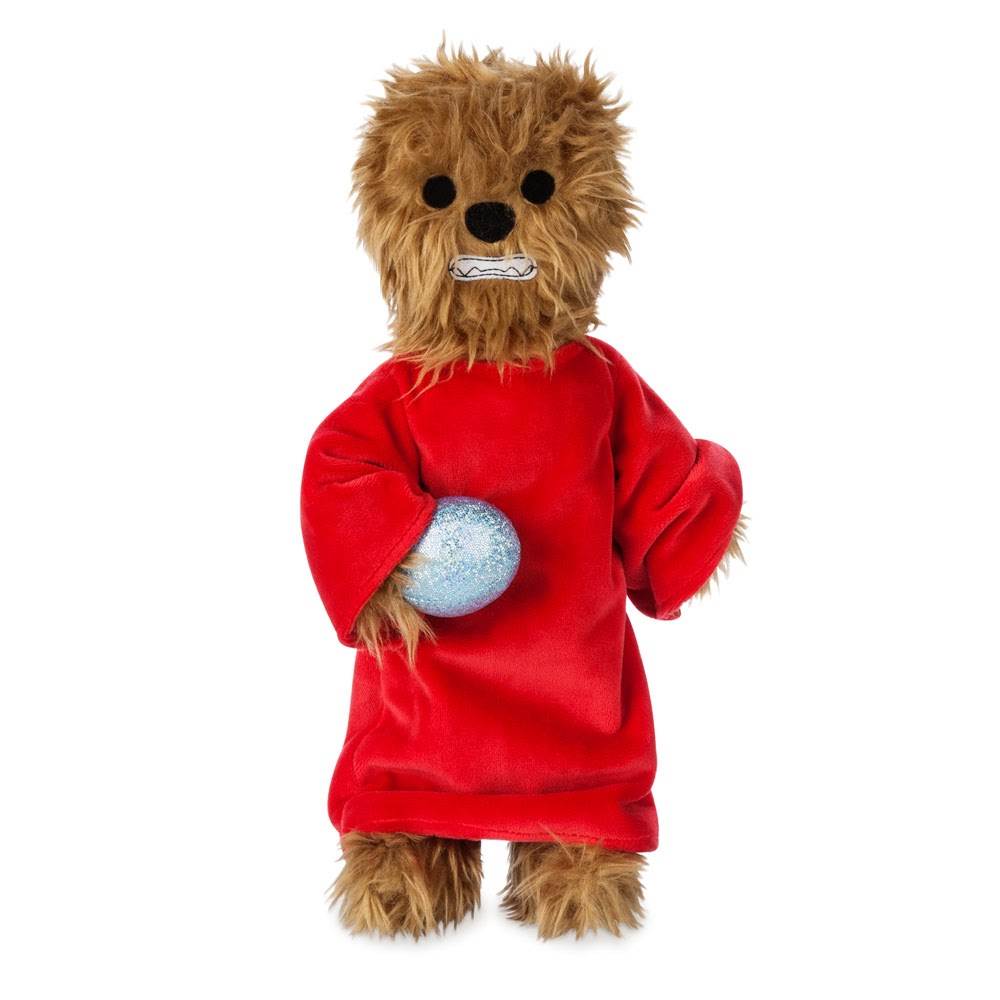