Opening with the cast singing karaoke in the car, for a second I thought I had the wrong show. My heart started to race. Did James Corden book another project?! Suddenly and thankfully, Miss Tyra strutted through the ballroom in a jester-like jumpsuit and I knew I was in the right place. Fear not, it’s not carpool karaoke. It’s Dancing with the Stars’ Queen night and we’re getting double the dances this week! 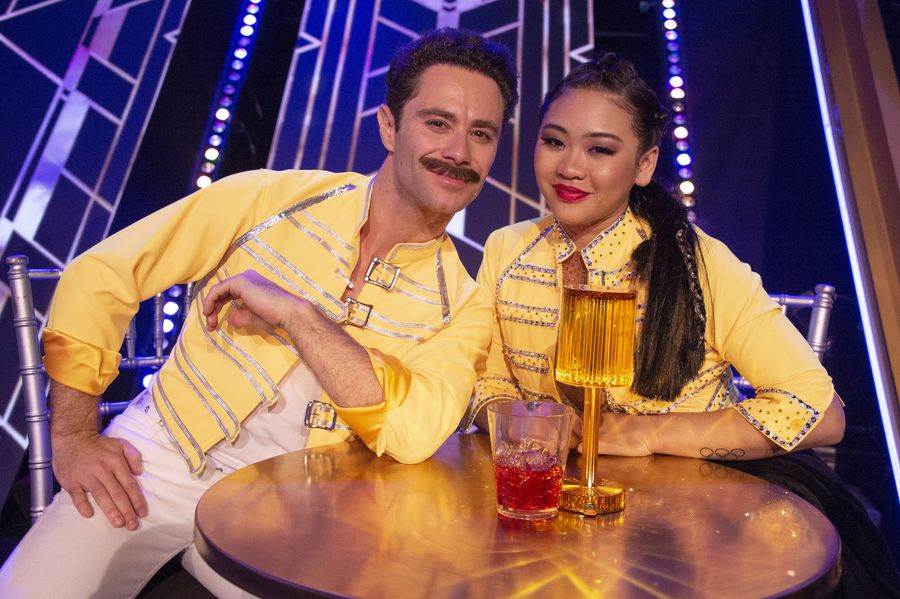 Amanda Kloots & Alan – Jive – First, I’d like to request one Amanda Kloots duo-tone leotard, please. Secondly, I have a major crush on Freddy-Mercury-Alan. And finally, I can’t believe how divided this dance left the judges! Out of the gate, Len hit them hard with some serious criticism that was pretty heavily backed by Derek and Carrie Ann. In contrast, Bruno jumped on the judges table with enthusiasm. I still don’t know how to feel. The expectations are very high for Amanda, however, I know she can exceed them. This dance was just not it. Judges Scores: 8 – 8 – 8 – 9

Olivia Jade & Val – Quick Step – “Lotta steps and very quick!” is right, Val! These two are getting some miles in this number. There wasn’t an inch of the floor left uncovered. I did notice there was a bit of a frame problem here and there. Val seemed like he was pulling in some points, but I can’t criticize too much. Carrie Ann noted Olivia excelling with “light feet” and “grace” and that seems to be the case for this vlogger time and time again! Judges Scores: 10 – 8 -10 -10

Iman Shumpert & Daniella – Paso Doble – After performing my favorite number of the season thus far, these two returned with newfound confidence and energy. Getting a tweet from Lupita Nyong’o can do that to you! Here’s the thing: Iman is thriving because he is entering the stage with unmatched commitment and unabridged swagger. In this rockin’ pasa doble, Iman managed to leap so high in the air I’m sure it could have ended in a dunk had there been a hoop present. I feel like the judges were a bit harsh on Iman for his posture and poses because I really enjoyed this performance. Judges Scores: 9 – 7 – 8 – 8

Jimmie Allen & Emma – Viennese Waltz – I recently found out I am one degree separated from Jimmie Allen and I can honestly say I’m ecstatic by the news. Maybe I had too high of hopes for the best Queen song of all time (“Somebody to Love”) because ultimately, this dance wasn’t my favorite of Jimmie and Emma’s. However, the judges loved it. They commended Jimmie for his lines, but more importantly, Tyra said it was “head to toe!”  Judges Scores: 9 – 9 – 10 – 10

The Miz & Witney – Foxtrot – Father Miz had a lot of notes for his son and I gotta say I do too. I felt like The Miz slipped into some old habits this week with the strain in his expression. The footwork was solid throughout the Queen hit that doubles as the origin story of Lady Gaga, yet I was too distracted by his tense frame. In my opinion, the judges' scores were a bit high, but they just love to love The Miz. Judges Scores: 8 – 8 – 8 – 8

JoJo Siwa & Jenna – Tango – Hot off two, consecutive perfect scores with a sexy, techno tango the besties stay bestin’ the competition! Jenna brings some of my favorite choreography of the competition and now some of my favorite hairography as well! Despite being able to rock her staple high pony, this dance was a challenge for JoJo. It was a bit outside her comfort zone with the dance’s required sensuality, but you couldn’t even tell. Carrie Ann delivered the best compliment ever, “You’re reminding me of Zendaya!” So even if JoJo doesn’t win, she can take that with her forever. Judges Scores: 10 – 9 – 10 -10

Suni Lee & Sasha – Pasa Doble – Suni is having doubts, getting in the bottom two, and feeling sick (not with COVID)! And I’m so sad! This number was a make or break moment for sure and unfortunately, Suni was feeling so ill she immediately left the stage. Suni’s strides were elegant and wide, however, I felt like her face was fearful. Of course, this completely adds up now knowing of her predicament and I gotta give her credit for even showing up to the studio. Naturally, I was most grateful to see props making an appearance as they are unequivocally the best way to keep an audience member engaged, so Suni should statistically be fine. (I made that up!) Judges Scores: 8 – 8 – 8 – 9

Cody Rigsby & Cheryl – Foxtrot – In an emotional tribute to his late best friend, Cody and Cheryl brought a colorful celebration of life to the DWTS stage. I can clearly see how Cody holds such a dedicated fan base because he is the personification of joy. While I was still struggling to see improvement in his upper body, Derek disagreed noting his frame looked much better. (He’s probably right!) These two are due for a big boost in their scores to meet the rest of their competitors, but this was not quite it. Judges Scores: 8 – 8 – 9 – 9

Melora Hardin & Artem – Foxtrot – I loved seeing The Bold Type trio supporting their TV Show boss almost as much as I loved this very literal queen look on Melora. Last week, Melora received a “gentle kick in the pants” (her words!) to step outside her (very enjoyable) box of musical comedy. This week, her attempts to lean into a more sensual and sophisticated side were definitely seen as the judges simply ate it up! Her lines were clean and elegant as she brought a power to the ballroom that she hasn’t really tapped into before. Judges Scores: 9 – 9 – 9 – 9

For round 2, the couples were divided into three relay groups dedicated to a specific genre of dance: Jive, Foxtrot, and the Vienesse Waltz. The couples performed consecutively one after the other for the duration of one song. Each judge was granted an additional point to deliver to one couple within each relay group. These bonus points were then added to the couples total score for the night.

The first group consisted of The Miz & Witney, Iman Shumpert & Daniella, and Cody Rigsby & Cheryl all performing the jive. Starting it off, the Miz showed off a smoother game face than his last round, however the judges thought he was a bit stiff. Iman’s bit had Derek commenting on his swagger this time around, too! His expression seemed a bit stuck in a focused face, but overall Iman was my favorite to watch in this group. Finally, Cody and Cheryl graced the stage with a delightful jive. I did notice a misstep, but that didn’t detract from their overall performance. The judges gave their bonus points to the following couples: Carrie to Iman, Len to Cody, Derek to Iman, and Bruno to Cody!

The next heap of stars included JoJo Siwa & Jenna, Olivia Jade & Val, and Jimmie Allen & Emma performing the foxtrot. These three may have been “Under Pressure,” but they didn’t show it! JoJo and Jenna looked mesmerizing in purple, however I didn’t think it was their best. Good thing they have great scores already! (What could go wrong..?!) Olivia and Val brought a comedic element to this short number and I really appreciated them embracing their sillier side with a sillier challenge. The final couple matched the other pairs pretty evenly as they sauntered in their velvet numbers. The judges gave their bonus points to the following couples: Carrie Ann to Olivia, Len to Olivia, Derek to Olivia, and Bruno to Olivia!

By the way, this night was full of technical difficulties! Tyra’s mic cut out, but I was able to put two and two together. The final relay included Amanda Kloots & Alan, Melora Hardin & Artem, and Suni Lee & Sasha dancing to the viennese waltz. Amanda opened this challenge with her signature leg extension, but didn’t show too much we haven’t seen as an audience before. Suni heroically came back to the stage with a renewed vibrance and pulled out a beautiful few bars. Melora closed the trio out, absolutely glowing! If it were up to me, she would be the champion of this brief battle. Carrie Ann pulled a Derek and jumped onto the deliberation table just before the judges gave their bonus points to the following couples: Carrie Ann to Suni, Len to Melora, Derek to Amanda, and Bruno to Melora!

The bottom two are revealed as JoJo & Jenna and The Miz & Whitney. Obviously seeing JoJo & Jenna is a complete shock, but luckily the judges are in control of the final verdict. After a unanimous vote, The Miz & Whitney are the next couple to leave Dancing With The Stars. I was pleasantly surprised by this pair this season. All I can do is send a big congrats their way and keep my fingers crossed they join the DWTS tour. Don’t miss next week because the couple are set to conquer the legendary musical styles of Janet Jackson. See you then!