Hello and welcome to the (likely) final installment of Laughing Place’s regular recap of the science-fiction drama series Y: The Last Man. The tenth episode of the show’s first (and probably only) season, entitled “Victoria,” was released today via FX on Hulu.

“Victoria” begins with a flashback to pre-cataclysm days, and then-Senator Brown and her husband having dinner with her daughter Hero and her son Yorick, plus Yorick’s girlfriend Beth. Y is describing his escape-art act that involves his family members as metaphors, which Jennifer calls “interesting” and Hero scoffs at, mocking Yorick’s privilege as the son of a congresswoman. After the opening titles, we see Agent 355 laying in the middle of a deserted small-town road. She opens her eyes and finds her adoptive mother standing over her, who transforms into a local woman. Sarah snaps out of her delusion, gets up and walks away. Then we cut to Nora and Roxanne riding horses through the woods. Roxanne is telling Nora she should learn to enjoy the post-apocalypse when they come across the town where Yorick and his friends are staying.

In a greenhouse, Dr. Mann tells 355 about which species are going to die out first because of their short lifespans, and she notices that Sarah started sleepwalking again. She offers to help, but 355 says the only way she’s been able to prevent it is by tying a ten-pound sandbag to herself. She says it’s time the group moves on from the town, even though Mann is against it. We see Roxanne’s women watching the town from a distance, and then inside the house Yorick discusses sex with Sonia, telling her that he’s only ever slept with Beth. Sarah enters and tells Y they’re leaving tomorrow. At a swimming pool, Roxanne and Nora brief their group about the planned attack on the farm, and two women come in holding shotguns and claiming the pool is theirs. Hero tries to talk them down, but they tell her that they heard a group invaded the Pentagon and killed the president. They get scared off by Roxanne’s people, but Hero is deflated, and flashes back again to the dinner with her brother and parents. 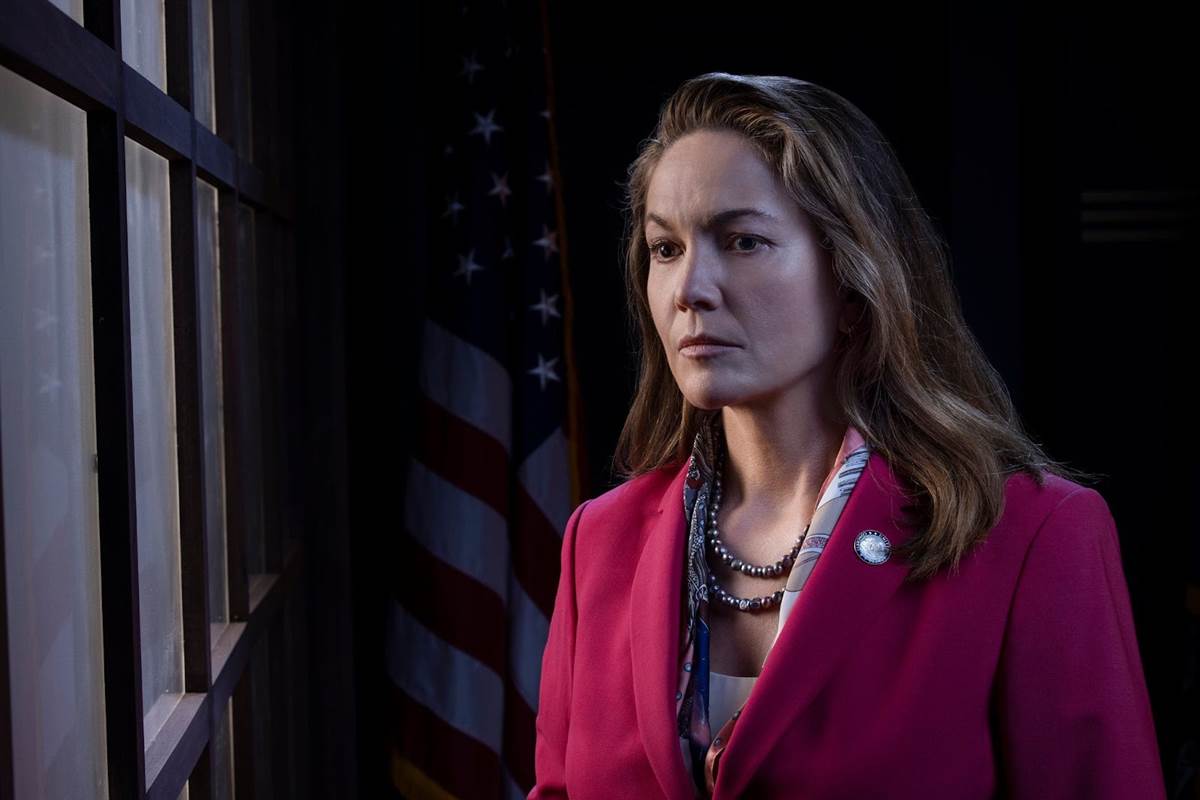 During the flashback, Beth talks about the possibility that she might leave the country for Australia. Senator Brown congratulates Beth, though her husband is distracted by texts on his phone. In the present, Beth brings President Brown to her abandoned house, where the president refuses to shave her head and Beth demands to know where Yorick is. “The world has changed,” says Beth, “You stay here, they will find you, and they will probably kill you.” Beth tells Jennifer to pack what she can carry, because they are going to leave at nightfall. At the farmhouse, Y and 355 pack up as they prepare to leave, and he compares her to his mother, which she rejects. Sarah says she doesn’t know anybody else in her spy organization, and Yorick argues that they should stay in the town. They argue about whether or not Dr. Mann can help rebuild the human population, when the doctor enters and says the town is throwing them a goodbye party.

In another flashback, we see the dinner devolve into bickering between the siblings at the table. Hero admits she’s been dating someone named Mike, who is married. “What are you doing?” asks Jennifer, and Hero is evidently drunk. “Your mom’s right,” says her father. Hero accuses him of having an affair with his TA and tells Yorick that he should have her back. Senator Brown excuses herself from the dinner, but not before whispering something inaudible in Hero’s ear. In the present, someone enters the house where Beth and Jennifer are and Beth tases the person, who is revealed to be Sam, looking for the president. Sam tells them that Hero is alive and that someone is in a van outside watching the house. Lights start to turn on outside and people start banging on the doors. “We’re going to need you to come with us,” says a voice as we cut back to a night swim at the swimming pool. 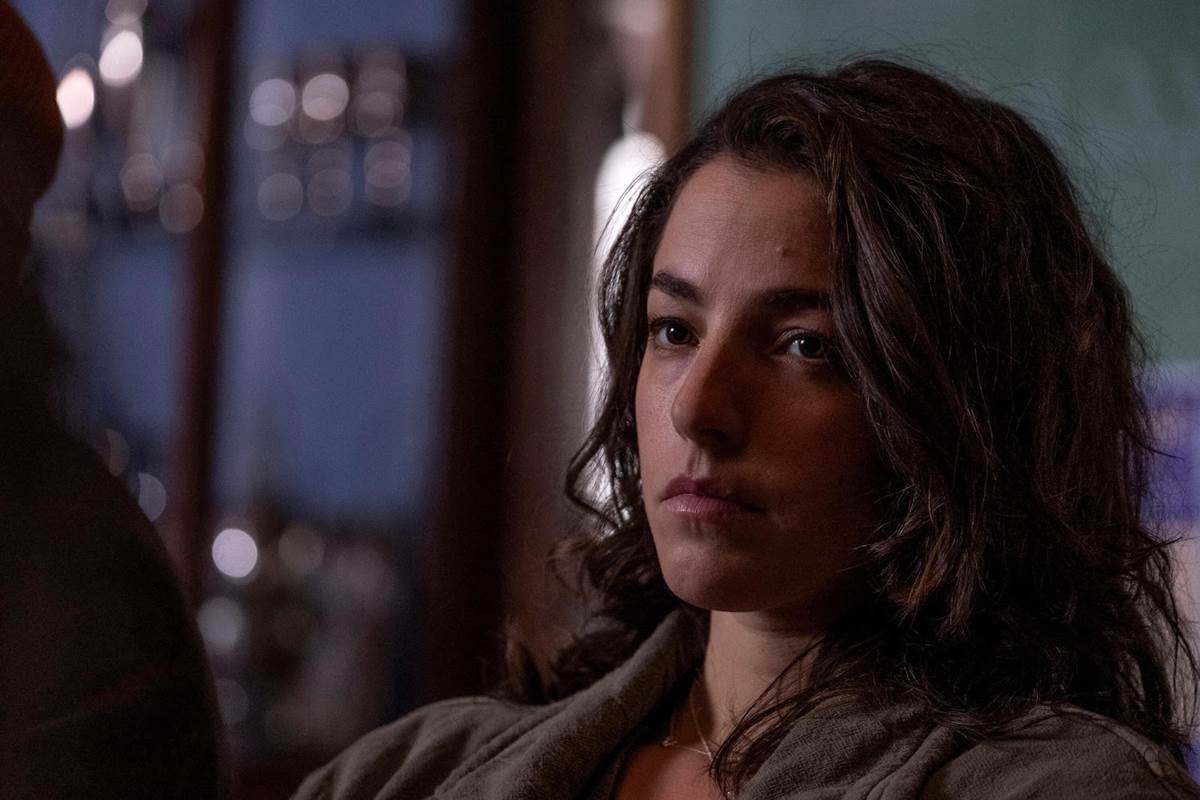 Nora and Hero discuss their relationships with the president, and why Jennifer named her daughter Hero after the Shakespeare play Much Ado About Nothing. Roxanne interrupts and tells them to stop mourning the past, because the “Amazons” are celebrating their planned conquest of the farm community. At the farewell party, Dr. Mann leaves early to talk with Agent 355 about their journey to San Francisco. “What if I can’t fix this?” she asks. “It’s a lot to ask, even of the smartest person in the world,” says Sarah sarcastically, “but you have to try, right?” Mann and 355 cuddle on the bed, while at the party Y and Sonia also talk about San Francisco. “There’s a lab there.” Sonia says she’ll miss Yorick, and he hesitantly agrees: “Yeah, I’ll miss you guys too.” Sonia talks about the concept of linear time and admits that she killed someone, which is why she was in prison. Y kisses Sonia, and they move into another room.

In the early morning, Mackenzie wakes up in the aftermath of the swimming pool celebration, and Nora follows her, finding a towel spotted with menstrual blood. They talk about it in the locker room. “You know I love you, right?” asks Nora, “I’m sorry.” She gives Mackenzie her wedding ring and says she should wear it on a chain around her neck. “I need you to be brave and strong.” At the Pentagon, Kimberly Cunningham fantasizes about sleeping with Yorick, then wakes up in a barn to find it was a dream. Kim wakes up Christine, who is sleeping next to her. “I know what we need to do,” says Kimberly. “All we need is him.” At the house, Y and Sonia wake up in bed together, caressing each other, and Dr, Mann and Agent 355 do the same in the other bedroom. Sarah spots the tracking device similar to the one she had broken on her windowsill and starts panicking, 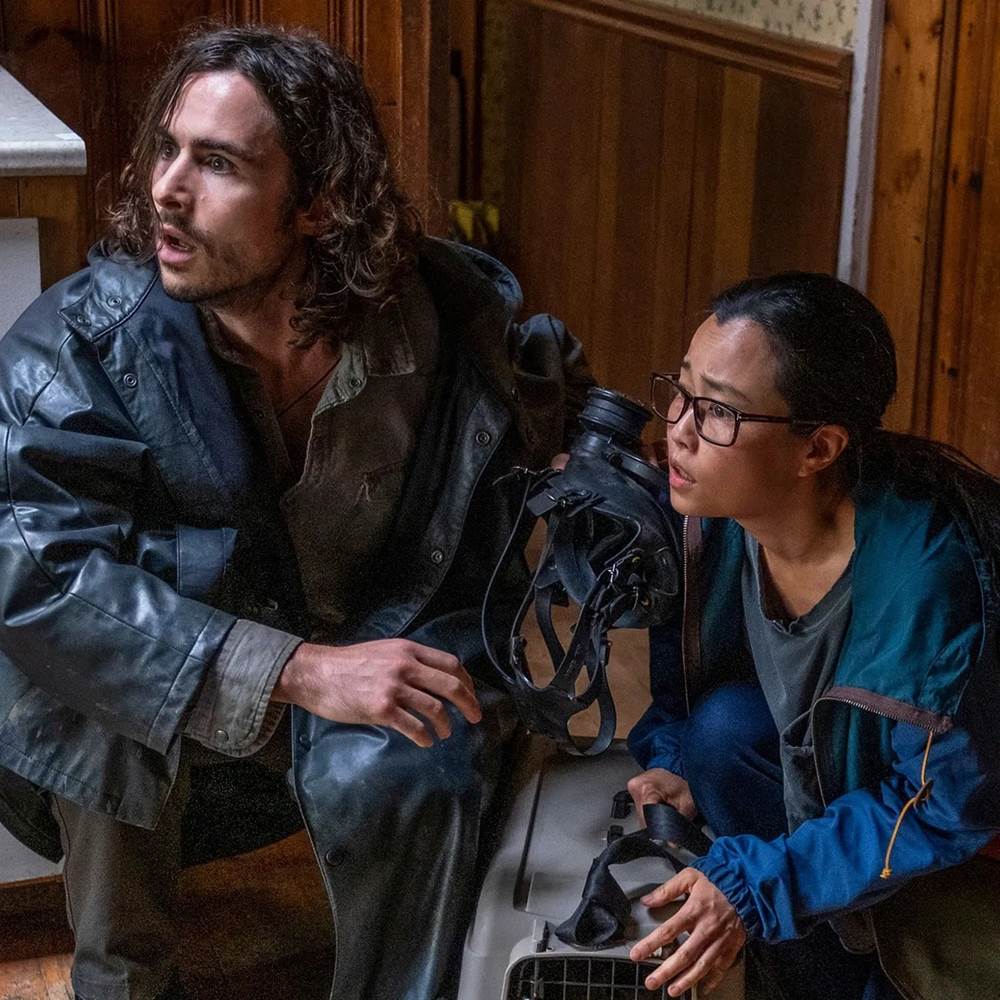 Roxanne’s people invade the town, some of them on horseback. One of the town’s representatives comes out to talk with them and Nora confronts her. “We hear you’ve got a man in town.” One of Roxanne’s people knocks the woman to the ground and another lady comes out. Roxanne demands they hand over Yorick or face the consequences. “You have no idea who you’re dealing with,” says the woman. In their bedroom, Agent 355 and Dr. Mann hear gunshots, so Sarah goes to wake up Yorick, telling him he can’t be found by the invaders. She tells him to run with the others and goes outside to pretend to surrender to the invaders, bringing the trans man with her as a decoy. Meanwhile, Hero searches the woods and Roxanne continues to threaten the women in the town square. Other women start shooting at Roxanne’s people from the rooftops, and 355 fakes an injury to get the jump on her captors.

Roxanne’s group has a shootout in the streets against the locals, while Nora searches frantically for Mackenzie. After they find each other, Mack offers to help in the fight, which Nora hesitantly accepts, letting her daughter pick up and wield a handgun. Dr. Mann, Yorick, and Sonia run through a field while Hero chases them, but when Hero realizes she’s pursuing her brother she becomes distracted and gets shot in the arm by Sonia and falls off her horse. Y and Hero embrace each other and Hero tells him their mother is dead. “You have to run. They’re coming for you,” says Hero, “They’re going to find you and they’re going to kill you.” Suddenly Sonia gets shot in the head, and Hero threatens to shoot Yorick if he and Mann don’t immediately run away. Hero kills the woman who shot Sonia. 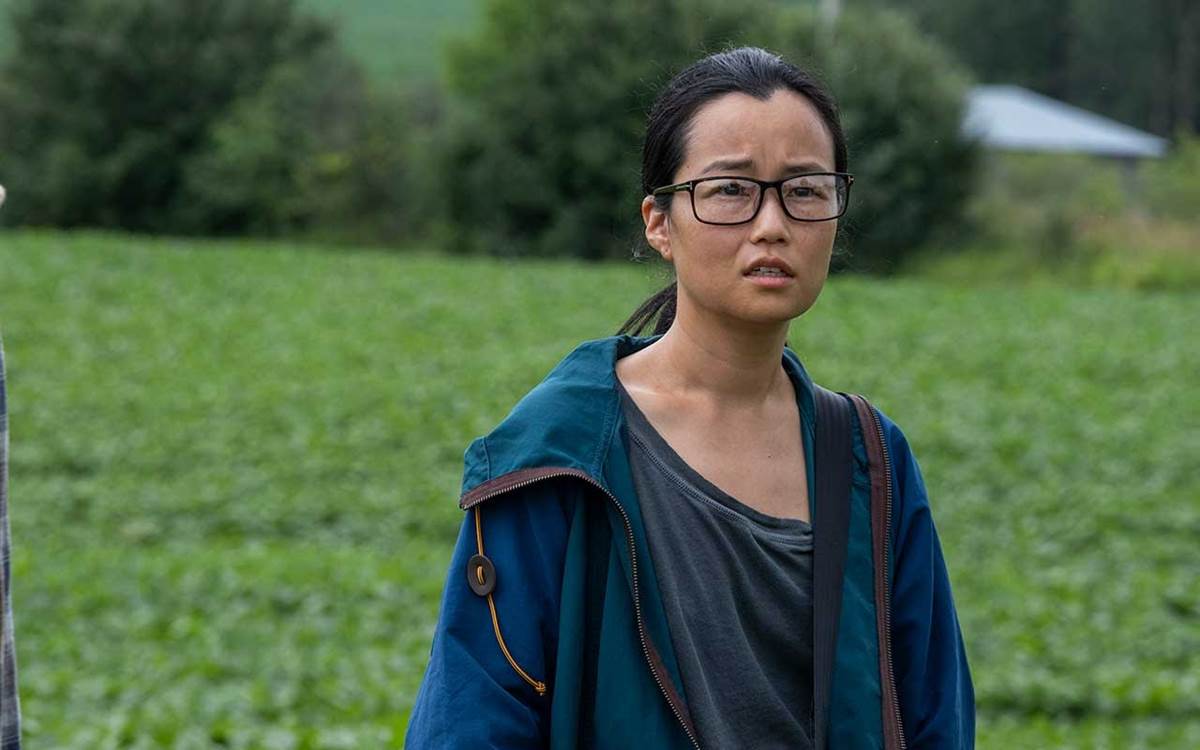 In another flashback to the dinner, Sam greets Yorick and Beth afterward, and Hero tries to apologize but they get in a cab and leave before they can talk it out. “I made a mess,” says Hero as she hugs Sam. At the farm community, Agent 355 helps the locals fend off Roxanne’s people, while Nora starts to regret her choice to invade after a woman dies in her arms. Sarah starts picking off the Amazons one-by-one with a sniper rifle, and Roxanne approaches, firing her handgun until it jams. Just as 355 is about to kill Roxanne, Nora speaks up and surrenders. Roxanne erupts in anger at Nora and walks off, kicking debris as she goes. Later, Nora trashes the locker room at the pool and Hero tells her that Yorick is alive. “I don’t know how. No one else knows.” Roxanne enters the pool area and berates Nora, but Nora replies with, “Tell them who you really are.”

“I’ve known a million men like you,” Nora tells Roxanne, admitting that she worked for the president. “The real you is a shadow and it is always there.” Roxanne orders Nora to be taken away, but Nora pulls a gun on her. “You don’t have the guts,” Roxanne says just before Nora shoots her and she falls dead in the pool. The other women draw their weapons on Nora, but she calmly speaks to them: “We don’t serve Roxanne. We don’t serve anyone. This world will learn to fear us, because we will show them exactly who we are.” Outside a group of silos, Dr. Mann hugs Agent 355 when she reunites with her and Yorick. “My sister’s brainwashed,” says Y, “and my mother’s dead.” Yorick says he wishes he had died so none of this would have happened. “You want to know something about me?” asks Sarah, “My grandmother was a singer, and one night when I was 12 she took me to a club.” 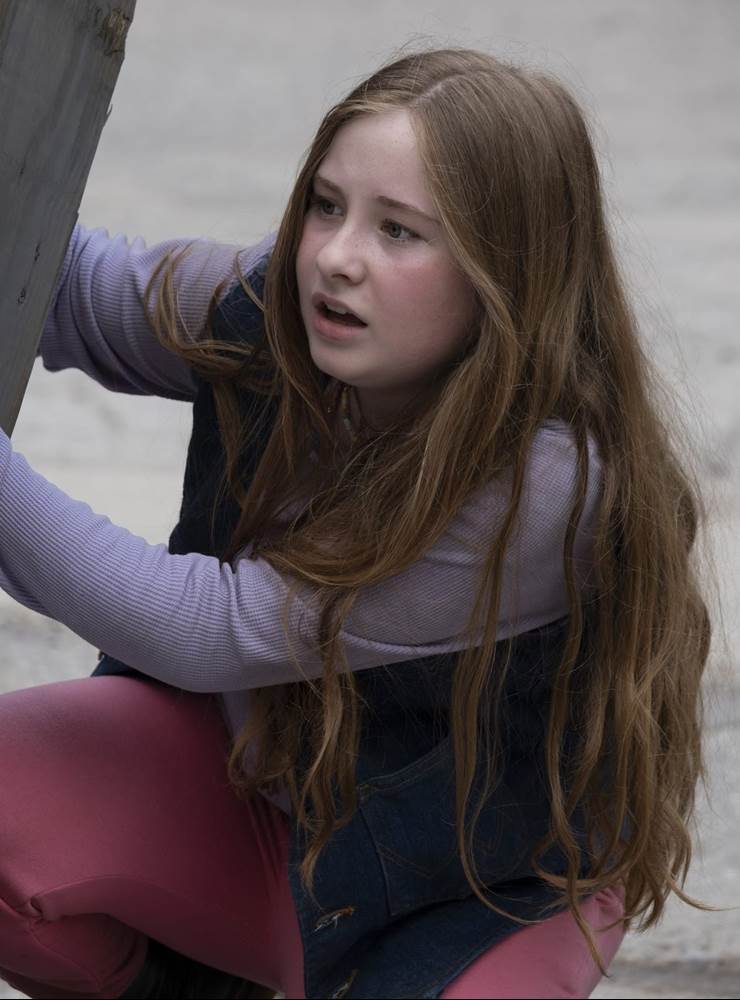 355 says her father was angry at her grandmother for taking her out at night, and when they’re driving home they got hit by a drunk driver and she’s the only one who survived. “I should have died, but I didn’t. I survived. You will too.” Sarah says Yorick can go if he wants, since if the president is dead she doesn’t have to follow the orders to keep him anymore. Y says that he wants to continue, but he doesn’t want to be helpless anymore. He demands that 355 teach him how to protect himself, saying that he’s a quick learner. “Prove it,” says Sarah. In a holding room, President Brown talks with Sam and Beth. “We’re being watched,” she says, looking up at the camera in the corner. We cut to a dark room where Agent 355’s adoptive mother/handler watches. “Come get me when she’s on the move,” she tells her underling. Next we see Sarah following her tracking device to a new car. “How’d they find us?” asks Yorick.

They’re surprised to find that the car has a full tank of gas, so Y and Dr. Mann load their supplies into the trunk. “They’re watching us,” says 355. She finds a map with coordinates on it. “They want us to come in.” They drive off away from the farm, as the camera lifts up into the sky and the series comes to an untimely end. 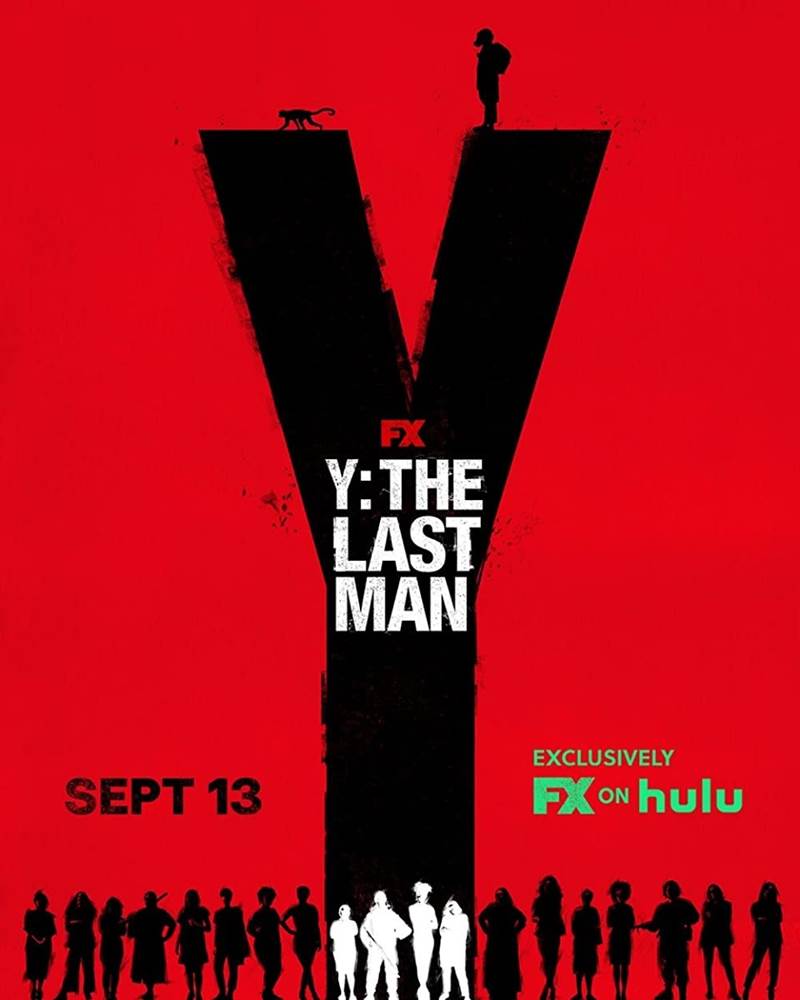 All ten episodes of Y: The Last Man are available to stream via FX on Hulu.