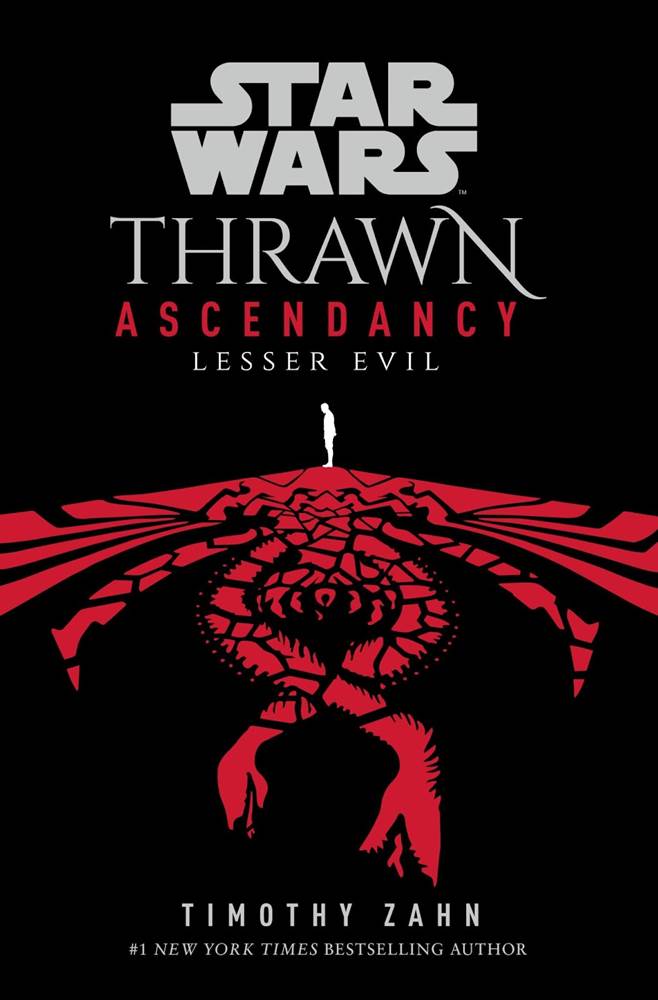 30 years ago, the Star Wars fan community was introduced to the then-new character of Grand Admiral Thrawn via Timothy Zahn’s acclaimed novel Heir to the Empire, which served as a high-profile sequel to Return of the Jedi and helped launch the Star Wars Expanded Universe of books and comics, now referred to as “Legends.” Then after the 2012 acquisition of Lucasfilm by Disney, Zahn began contributing novels about Thrawn to the new canon timeline, eventually penning two full trilogies of books focusing on the brilliant military strategist’s rise to prominence in the Galactic Empire, then rewinding time to fill in his past as part of the alien force known as the Chiss Ascendancy.

Next week sees the release of the sixth (and currently final) of these books: Star Wars: Thrawn Ascendancy – Lesser Evil, which will likely be the last time we see the character in-universe before he inevitably shows up in the Star Wars: Ahsoka live-action TV series coming soon to Disney+, as foreshadowed in an episode of The Mandalorian last year. 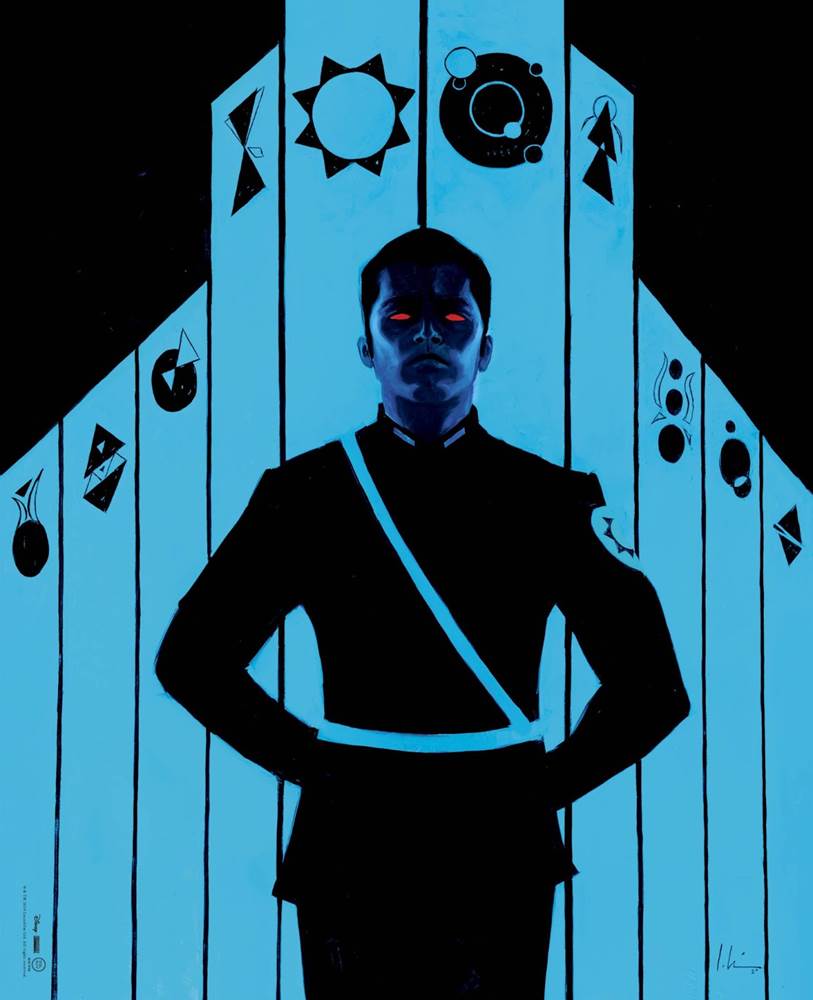 Thrawn Ascendancy – Lesser Evil begins where the previous novel (Greater Good, naturally) left off, with the title character having helped fend off an attempt by a species of outsiders known as the Agbui to sow discord among the Chiss families in an effort to foment a civil war. But as we learned in this trilogy’s first book Chaos Rising, the Big Bad pulling the strings on the Agbui– a mysterious being known as Jixtus, a member of an unseen group or species called the Grysk– isn’t going to give up that easily on brining the Chiss to their knees. Jixtus has now partnered with a faction called the Kilji, who are intent on coercing the entire galaxy into achieving the “enlightened” status of their particularly fervent religious sect. Are the Kilji just another pawn in Jixtus’s long game to gain control over the Chaos or does he actually intend to seek out their interests along with his own? The answer is probably obvious if you’ve been paying attention, but that’s one of the central questions playing out as this novel’s narrative goes on.

Standing in Jixtus’s way, of course, is the Chiss Ascendancy Expansionary Defense Fleet and its officers, namely Senior Captain Thrawn, his second-in-command First Officer Samakro, Admiral Ar’alani, and Senior Captains Ziinda (née Lakinda) and Roscu, all of whom have their parts to play in the 550-page proceedings of this labyrinthine conflict. Watching Thrawn match wits with his enemies has always been a highlight of Zahn’s Star Wars books, and in this installment it occasionally seems like the blue-skinned genius may have met his ultimate match, though we know at the end of this novel our (anti?)hero must leave the Ascendancy and make his way to Lesser Space, where this story connects with the beginning of 2017’s straightforwardly titled Star Wars: Thrawn. On the political side, we also get further dealings between the recently promoted Patriarch Thurfian and Syndic Prime Zistalmu, the scheming legislators who have pledged to work together to bring Thrawn down from the inside.

Then there’s the so-called “sky-walker” Che-ri– whose Force powers (though they don’t call refer to them as that) are beginning to blossom into something unrecognizable thanks to her connection with the matriarchal alien leader called the Magys– her caregiver Thalias, whose loyalties are called into question by Samakro, and the slippery Pathfinder named Qilori of Uandualon, who believes himself skilled at playing both sides. It’s already a lengthy list of “dramatis personae,” as the handy guide at the beginning of the novel calls the characters therein, but I haven’t even mentioned the intermittent flashbacks (titled “Memories”) to Thrawn’s early days in the Mitth family, during which he befriends and gradually earns the mutual, loyal trust of his adoptive brother Thrass. If that name sounds familiar to you, it’s because Thrass was also Thrawn’s brother in the Legends continuity, a fact that becomes more significant as the Memories go on, but I’ll write more about that after this book has actually been released. 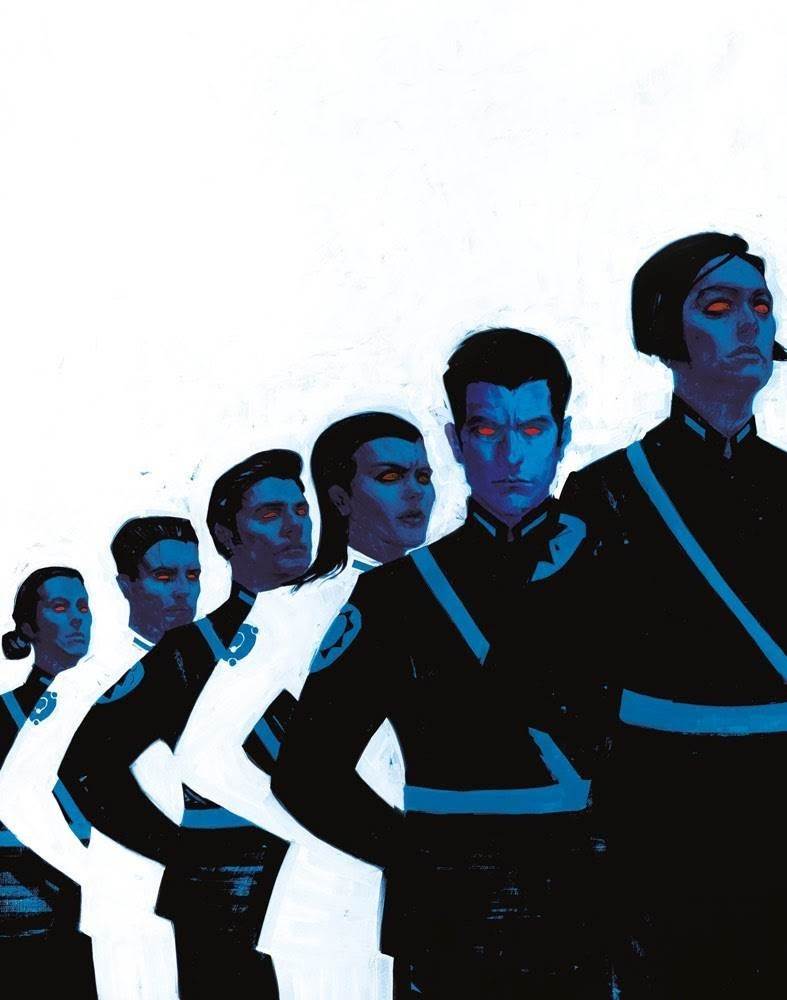 Lesser Evil is a hefty read– certainly on the longer side by Star Wars standards, but it is chock-full of the kind of intelligent, well-thought-out plotting and writing we’ve come to expect from Timothy Zahn after all these years. It’s also quite heavy on space battles, so if that’s not your thing, you may want to steer clear… they come up every few chapters and Zahn has a patient way of detailing each and every move from a strategic perspective, as opposed to watching these fights through the eyes of starfighter pilots like in Alexander Freed’s Alphabet Squadron trilogy. Here we get into the minds of those in command, though notably not Thrawn’s– like its predecessors, this book is once again told from the perspective of those in the senior captain’s orbit, keeping his inner thoughts as enigmatic and unknowable as the character himself. My one big complaint (and this is a fairly revealing one, so SPOILER WARNING…) is that the mystery of who Jixtus and the Grysks are is never resolved in these pages. When he first popped up at the end of Chaos Rising I thought for sure that Jixtus’s identity, or at least a description of his appearance, was important enough to be revealed by the end of the third novel, so I have to say I’m just a tiny bit disappointed it’s not addressed here.

What is Zahn saving that for? Are we going to see the Grysks again in Ahsoka, or is the esteemed author perhaps working on another Thrawn trilogy, or maybe a Thrawn-less, Chiss Ascendancy-focused spinoff? We’ll probably find out eventually, but until that happens, it pleases me a great deal to say that with Thrawn Ascendancy Zahn has accomplished what I would have thought was impossible: setting three full-length Star Wars novels almost entirely outside of the known galaxy, and populating them predominantly with characters that fans had never met before. It’s a testament to his writing prowess and the weight of his name in the Lucasfilm community that this trilogy happened– not to mention succeeded– and as always, I can’t wait to find out how he’ll be contributing next. Star Wars: Thrawn Ascendancy – Lesser Evil will be released on Tuesday, November 16, but is available now for pre-order.