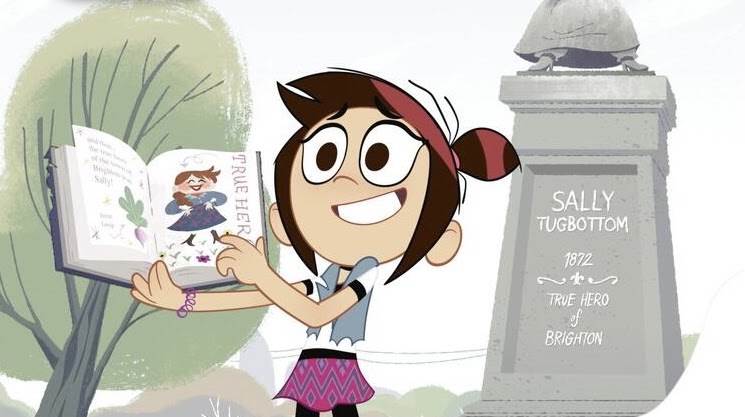 A new statue is going up in Brighton, and it celebrates town hero, Ezekiel Tugbottom. In fact, there’s a whole Davy Crockett-esque song about him. Apparently, a tornado came through town and Ezekiel threw his lasso and captured the tornado and saved Brighton from disaster. He, according to the song, is never mean and has big biceps thanks to a diet exclusively of turnips. See also: The recent turnip episode.

As the town celebrates, a shadowy figure lingers in the distance. Thanks to Molly’s ability to see ghosts, she actually catches Ezekiel admiring his own statue, but Scratch realizes something is amiss. He knows him from the ghost world, where he is known as Tug the Tornado, a blowhard, where he is nothing like the song portrays.

Molly doesn’t believe this however, and takes him on a tour of the town that he so lovingly saved, but Tugbottom insists the town needs a little bit more “him,” proposing to change building names, street names, and the name of the baseball field to his own.

A fire at the historical society sends Tugbottom into a panic and Molly thinks this hero will actually prove himself and prove Scratch wrong. But alas, he only enters the building to save a portrait of himself. While at the library, that shadowy figure from earlier is revealed to be Libby, who plans on telling Molly the truth about Tugbottom and the real history of Brighton.

Get ready for another Davy Crockett-esque song, this time telling the story of how Tugbottom is not a hero but rather his sister, Sally Tugbottom, who saved the town after a tornado by rebuilding it. Turns out, history was literally really written by Ezekiel and his Tugbottom press. While Molly sets out to set the town straight, Ezekiel shows up and proves why everyone calls him Tug the Tornado, and becomes a giant storm set to destroy Molly and the town, but only ends up destroying his statue. Scratch, who gets sent to the ghost world in the middle of the storm actually finds Sally and brings her back to save the day yet again.

We see the rededication of a new statue for Sally, now that new evidence has come to life. Libby, who is part of the society that uncovered this, starts to explain she knows more, but of course, that will have to wait for another time as the episode is over.

It’s the school’s talent show and Scratch is excited because this is his chance to meet and exceed his misery numbers and have him set for afterlife, but Molly, as usual, is optimistic and wants to make sure this is a happy event for all.

This will prove exceptionally challenging as her best friend, Libby, has signed up to be a stage tech for the talent show, but wait! She signed the wrong column on the sign up sheet IN PEN! And the teacher has taken the sign up sheet! Scratch is waiting because this is sure to make his misery numbers skyrocket. Luckily for everyone, Libby can sing…or so she thinks.

Scratch tells Molly she needs to be honest, even if it's brutal, and tell her friend that she can’t sing before she gets in front of a crowd. Molly tries everything, even auto-tuning Libby. But Libby takes this all as jealousy, saying Molly needs to find her own talent. She chases Libby out to find her getting in the car with her mom, who is possibly more excited to see her daughter perform than she is. She’s even closing the family bookstore early on slam poetry night, and there is nothing they take more seriously than their slam poetry.

The talent show has arrived, and Molly is out to stop Libby from embarrassing herself. In one of the best songs of the series, the Beastie Boys-inspired “Obstruction” plays over a montage of outlandish attempts by Molly to stop Libby from taking the stage while Scratch relishes in the Misery numbers of the performers (except for Andrea, as he is now a “fan-drea”).

All the attempts have proven unsuccessful, and Libby is backstage ready to go on, and Molly finally cracks and tells her that she’s a terrible singer. Of course, this was probably the worst possible time to tell her and Libby’s anxieties take over, but she decides to face her fear and hit the stage, but she’s going to improvise.

Her real talent shines through and Libby takes into a rousing piece of slam poetry about facing your fears, and the audience and Molly are blown away. Now, Scratch is out to ruin this because this was going to be the big break for his misery numbers, but Molly attempts to stop him, falling on to the stage, with her ghost-wrestling moves going hand in hand with Libby’s performance.

Molly realizes the error of her ways and vows to be honest at all times with her best friend, until she asks about Scratch that is.

This episode of The Ghost and Molly McGee is now available on Disney Channel and the DisneyNOW app. You can also catch up with earlier episodes streaming now on Disney+.