Hello and welcome to Laughing Place’s regular recap of new episodes of The Simpsons on the FOX network. This week’s installment, entitled “A Serious Flanders (Part 2)” is the conclusion of this two-parter and the seventh episode of the long-running animated sitcom’s 33rd season. 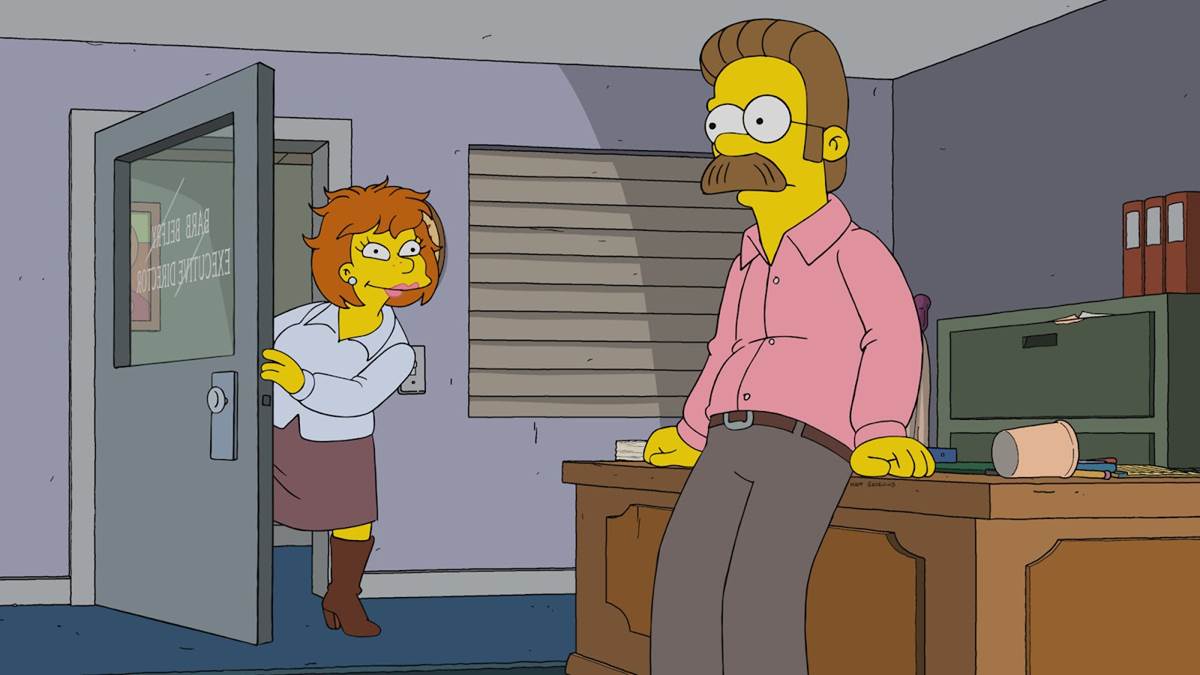 “A Serious Flanders (Part 2)” begins with the “Simpflix” logo, followed by a title card for “A Serious Flanders,” along with a warning that this fictional show-within-a-show contains “graphic violence, gratuitous guest stars,” and “brief comedy.” With chapters 1-3 having been completed in last week’s episode, the viewer scrolls over to chapter 4 and clicks “play.” As the story picks up where the cliffhanger left off, Marge is in the Springfield police station urging Chief Wiggum to track down Homer, who has gone missing. Wiggum is distraught that Mr. Burns, Disco Stu, and Fat Tony are all dead: “Look what they did to my beautiful goombah!” Marge thinks Ned Flanders has something to do with the doughnut store massacre, but Wiggum says he’s not man enough to take on Becker, who he calls “Satan himself.” He promotes Eddie to chief and abandons his post, leaving Marge to sift through the evidence and discover that Becker is driving the Rich Texan’s car.

At the Flanders home, Ned struggles to come up with the ransom to save Homer: “I can’t do a GoFundMe for a kidnapping… there’s too many of those already.” We get a flashback to young Ned and his grandfather in a barber shop, where they’re accosted by the Szyslak brothers. Sheriff Flanders makes the barber and Ned leave the room, and then accepts a bribe from the gang of toughs: “My favorite time of day… bribe o’clock!” He punches one of the brothers through the window to maintain his image, and outside Ned hugs him for being “the finest man” he’ll ever know. We then get a montage of Sheriff Flanders drinking, doing drugs, gambling, soliciting prostitutes, and even licking a poison frog. He travels with the Szyslaks to meet with another mob outside a motel, and their “numbers guy” (AKA a younger Becker) counts the sackful of money they deliver. Then the Szyslak gang turns on the other mob, pulling out their guns with a variety of backup popping up behind them. 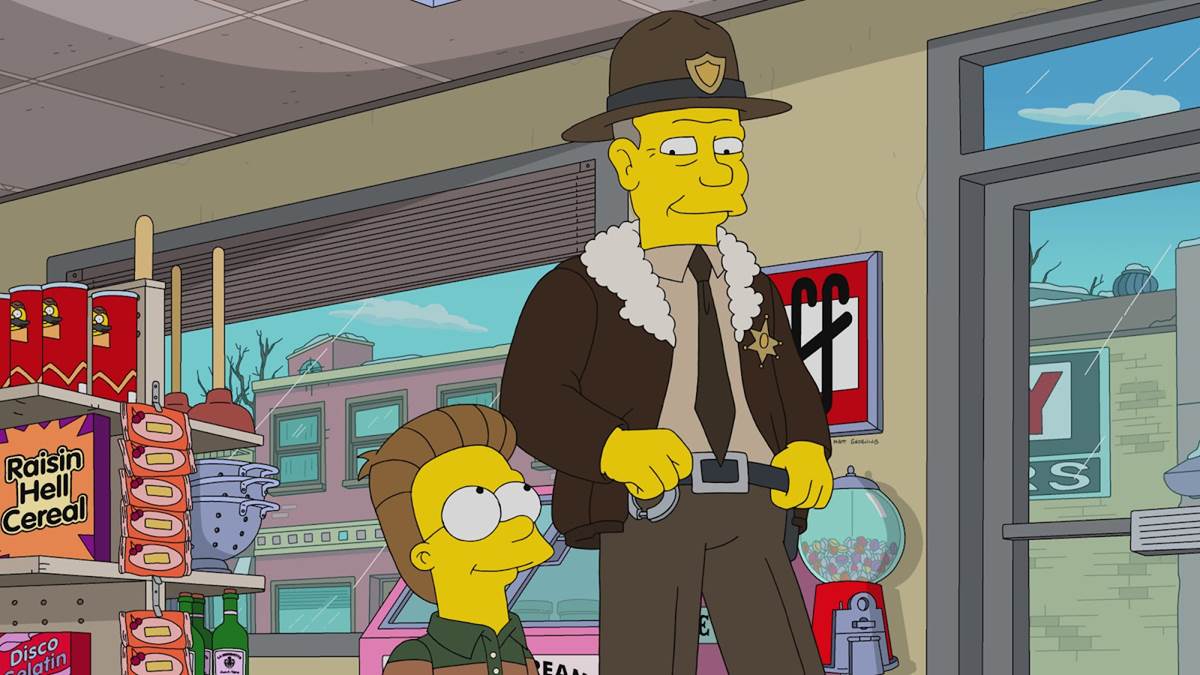 But this other mob has backup too, and Sheriff Flanders tries to talk both gangs down from a bloodbath: “Put down your crazy assortment of weapons… I’m talking to you, Mr. Dynamite Nunchucks.” At the motel, a young Hans Moleman is disappointed that the ice machine is broken and mutters, “Oh, shoot,” which ends the standoff in a hail of bullets. Sheriff Flanders hides under a car and watches as the gang members eliminate each other one by one. He prays and promises to become the kind of man his grandson can be proud of, if only he survives the carnage. Suddenly the parking lot goes silent except for one remaining Szyslak brother, who the sheriff immediately shoots dead, taking the bag of money: “Sorry, God. But hey… you can only send me to hell once.” He stuffs the bag in the knot of a tree, and then Becker emerges from the snowstorm and demands to know where the money is. Before he can show him, Sheriff Flanders slips on the ice and impales himself on Becker’s knife, ending his life.

“Well, there goes my life,” Becker says as he writes the dollar amount down in red in his ledger. At that point the cops show up and their car slips on the ice too, plowing into the tree and knocking it down a hill to be discovered by Ned Flanders and Homer Simpson in the future. We dissolve back to the present, where Ned looks grimly at a plaque dedicated to his grandfather before vowing to steal back the money he gave to the orphanage. At the Rich Texan’s house, Beckers minions Seamus and Collette prepare dinner while Homer remains tied to a chair. The two hooligans bicker about their marriage, which breaks out into an all-out physical fight, and Homer uses the distraction to cut his ropes using a kitchen cleaver. But a pot on the stove boils over and a fire quickly spreads throughout the house. After their fight culminates in them pointing handguns at each other, Seamus and Collette embrace and start furiously making out until the ceiling above them collapses and a bathtub crushes them to death. “You guys okay?” asks the still-bound Homer. 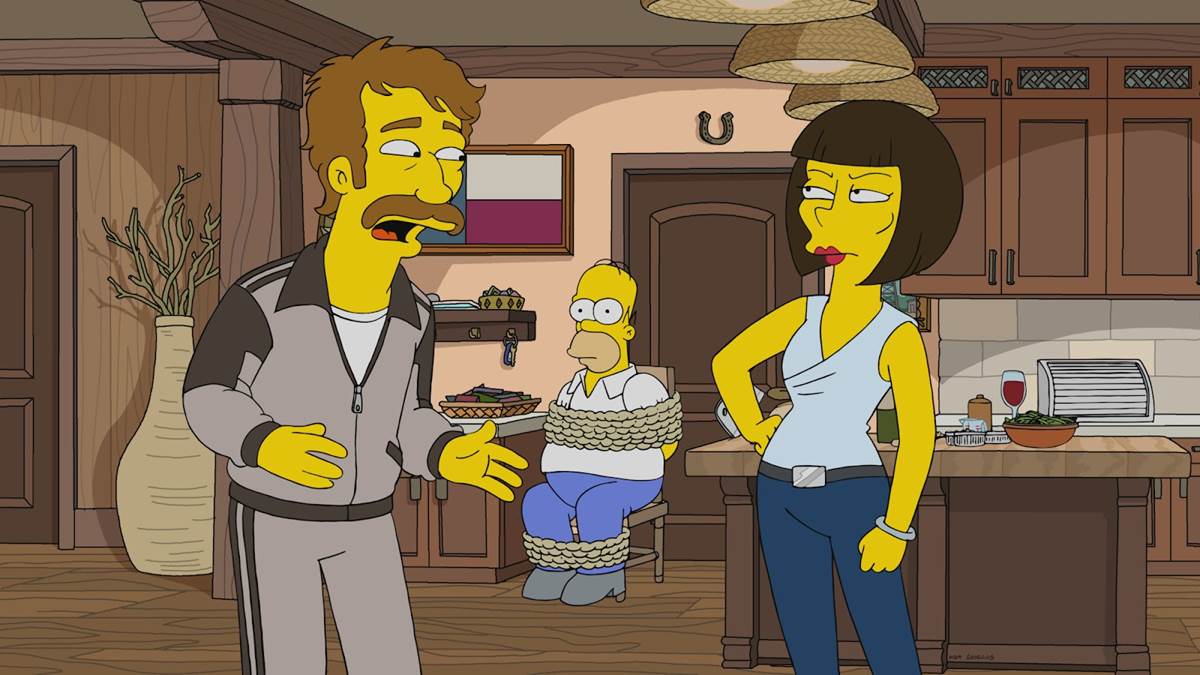 Ned Flanders breaks into the orphanage and searches frantically for the key to the safe. Barb enters and finds Ned sitting calmly at her desk. Ned says he’s in serious trouble, then spots the key hanging around Barb’s neck, so he pretends to still be interested in participating in her open marriage. We cut back to the Rich Texan’s house, where someone drags Homer out of the fire. He later opens his eyes to find Marge standing over him relieved. Ned and Barb finish making love, and Ned uses the key he swiped from Barb’s necklace to open the safe, stealing back the money and driving off. Barb realizes what happened and chases after him, throwing a flagpole through the back window of his car. “I’m sorry, God! I just want Homer Simpson to be okay,” Ned cries, just before he sees Marge and Homer driving safely in the opposite direction. Then another car comes out of nowhere and smashes into Ned’s. The Simpsons find Ned unconscious in his driver’s seat, but when Homer spots the bag of money he hesitates.

A fire breaks out in Flanders’s car, badly burning Homer’s arm as he struggles to free the bag of money, but he’s able to retrieve it while also accidentally dislodging Ned from his seat. “I’m married to the most selfish man in the world,” says Marge, who watched the whole thing unfold. Then Barb appears and praises Homer for saving the orphans’ money and the American flag. Marge shakes her head and walks away while Barb berates Ned Flanders, who has disappeared in the commotion. In a nearby alleyway, Ned receives a call from Becker, who says, “Money can be lost, Mr. Flanders. But a debt never goes away.” After a commercial break, a narrator says that three years have passed since Homer saved the orphanage’s money. And now he’s apparently opened a car repair shop called “Heroic Lube and Tire on Disco Stu Memorial Drive. Marge reluctantly helps in the business, but in private she still hates Homer for what he did to Ned. A teenage Bart enters the shop, having earned his “Online Citizenship” badge at the Boy Scouts “for being polite on social media.” Then Lisa comes in, saying she got 100 RSVPs to her birthday party from people who probably just want to meet Homer, who receives a mysterious blank postcard from Wyoming. “Probably just junk,” he says, tearing it up and throwing it in the trash. But later, after driving past Ned Flanders’s now-boarded-up house, Homer parks his car in a garage and switches to a red pickup truck, putting on a blonde wig. He drives to a diner and eats breakfast, and we see a montage of him in various disguises around town. Later he hikes into the woods and makes his way past a booby trap, but is then held at shotgun-point by Rod and Todd Flanders. Ned emerges from behind a tree and takes Homer to a cabin, where he unpacks the supplies that his friend has brought him. Ned asks how things are in Springfield. “Marge hates me,” Homer weeps, “all because I saved that money’s life and not yours.”

Ned hugs Homer, admitting he brought the attention on them both, and Homer says they both suck equally. They hear the booby trap go off and assume Becker has tracked them down, but Marge breaks down the door and is shocked to find Ned hiding out instead of a mistress. “This is the most selfless thing you’ve ever done,” says Marge. “Hey, you weren’t followed here, were you?” Homer asks just before the cabin erupts in gunfire. Becker enters to find that his adversaries have escaped through the floorboards. In the woods outside, Homer and Marge make up, and Ned says he won’t put them in any more danger and he’s the one Becker wants. “Okay, bye! Good luck!” yell the Simpsons as Ned Flanders escapes on foot. Becker tracks Ned through the woods and out onto a frozen pond: “Would you be paying your debt in money or blood?” When he doesn’t receive an answer from a gasping Ned, he continues, “Blood it is,” crossing out the number in his ledger. Beckers starts telling Ned the parable of “Lucifer and the Millipede,” which causes the viewer to start fast-forwarding through the Simpflix app until he says, “the end.” Ned begs Becker to just kill him already, as he thinks he deserves it for tarnishing his grandfather’s good name. But Becker just laughs, telling him, “Your grandfather was dirtier than a hobo’s handkerchief. He even killed a man in cold blood for that money.” Ned freaks out, tackling Becker to the ice, grabbing the ledger out of his jacket, and tossing it dozens of yards away. Becker runs after the book, but the ice starts to crack around him and he sinks to his death, but not before further humiliation and being eaten by some fish. Ned watches him go, and then we get a split-screen montage of the aftermath of these crimes: Bart gets more merit badges, a booth at the doughnut shop is named in honor of Fat Tony, and Snake becomes the new reverend at Springfield’s church. The Sea Captain sleeps with Barb, Ned and his sons clean up their house, and Homer and Marge push their beds back together. 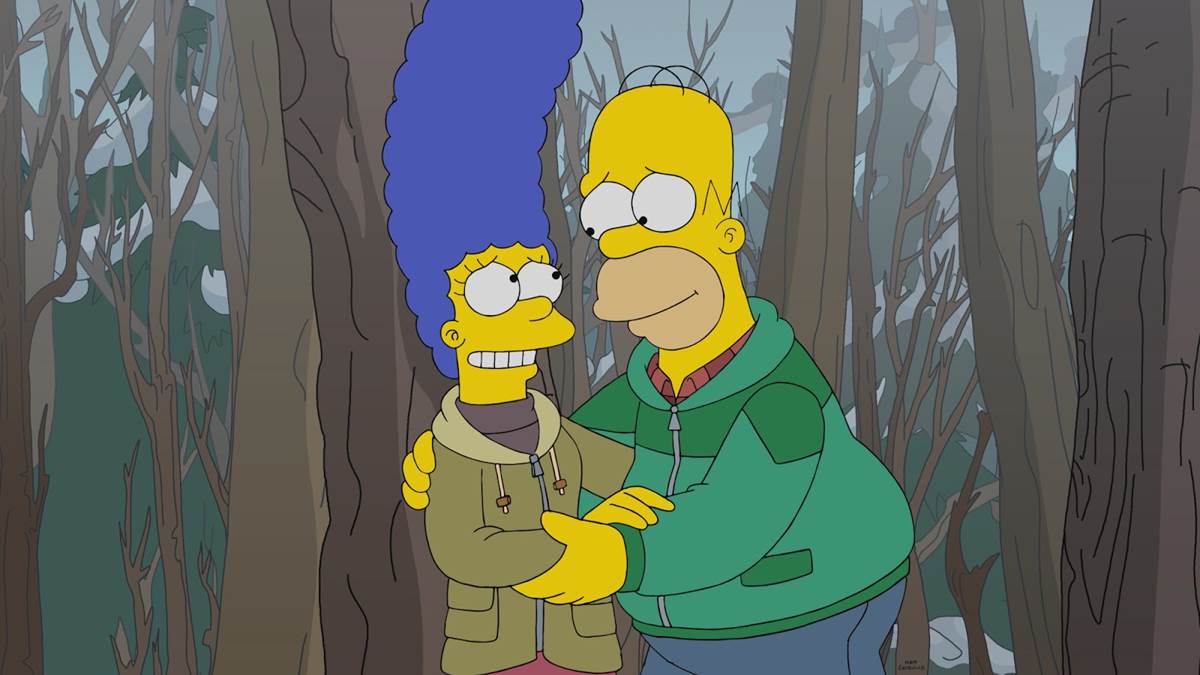 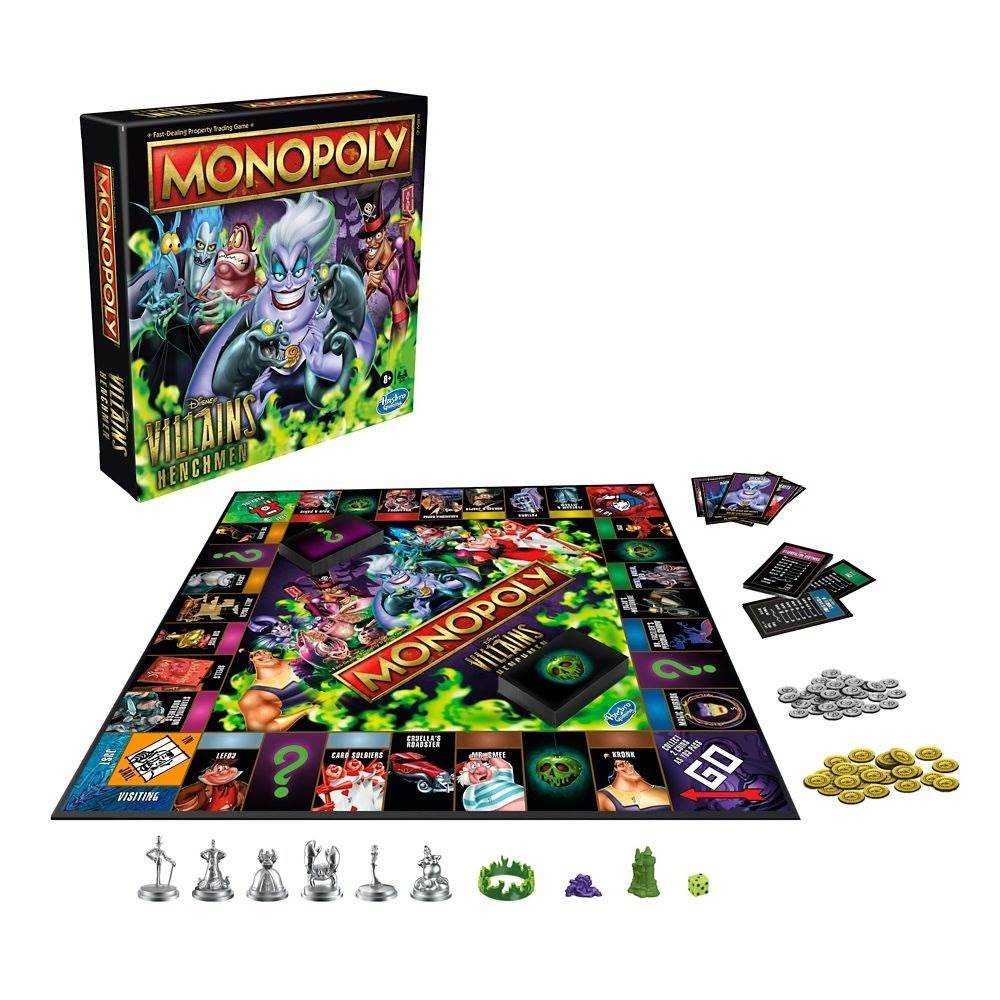