Walt Disney World only turns 50 once and during the 18-month long World’s Most Magical Celebration, one of the ways Guests can enhance their celebration is with a new VIP Tour experience, fitting called the 50th Anniversary Tour. Hosted by a Disney VIP Tour Guide, the 8-hour tour is designed to maximize your appreciation of the history of the resort with a planned itinerary that includes resorts, theme parks, and Disney’s iconic modes of transportation. “Get ready to travel by land, sky and the seven seas on an adventure of a lifetime,” read the branding on the tour and with that, we set out for a magical day of experiences. 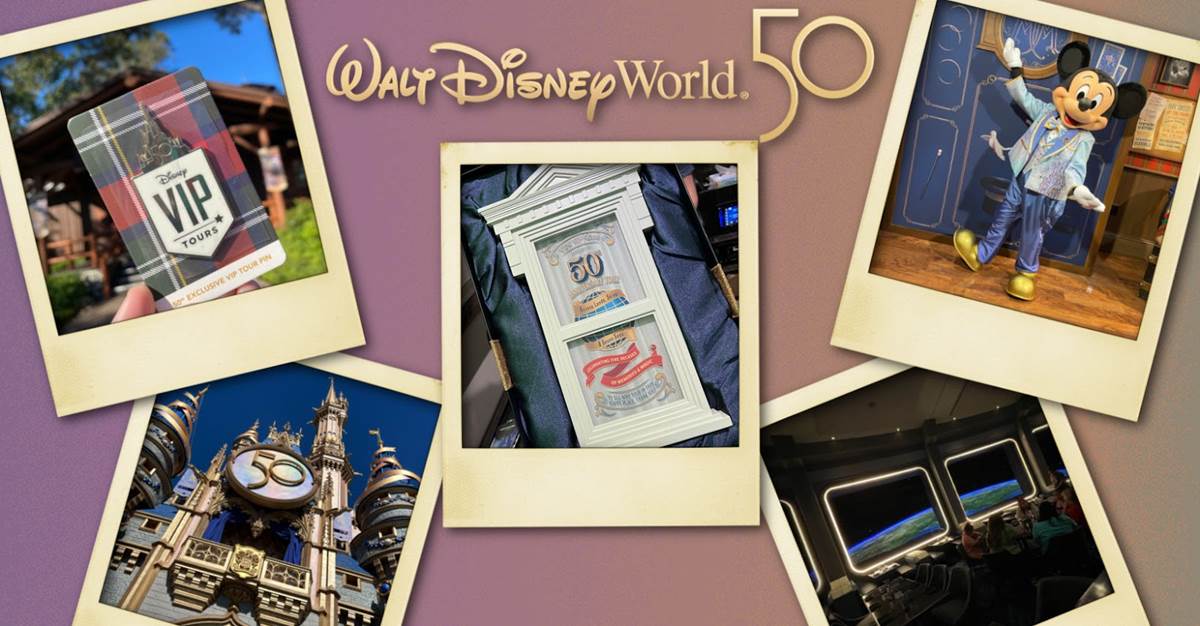 Your VIP Tour Guide will meet you at the Disney Resort you’re staying at, but since we weren’t staying on-property we met our guide Kelly at Disney’s Fort Wilderness Resort & Campground. Each member of our party was given a special 50th Anniversary version of the Disney VIP Tours pin. This tour accommodates a maximum of 6 Guests. Our first mode of transportation was by land in a deluxe motor coach with digital controls that could raise and lower the shades, turn on multicolored lighting enhancements, and even stream Disney+ during the ride on two TVs facing each other. Disney’s Fort Wilderness Resort & Campground served as lodging for construction workers while Magic Kingdom park was being built. Since Walt Disney’s first paying job as an artist was drawing his dentist’s horse for a nickel, we toured the brand-new Tri-Circle D horse barn and got to meet some of the steeds that pull the trolly and carriages down Main Street U.S.A. We also got to see the calliope that Walt Disney purchased, which was used in the film Toby Tyler and parades at Disneyland and Walt Disney World. It was recently redesigned in honor of the 50th Anniversary and as a special magic moment, we got to press the button to activate the calliope playing “When You Wish Upon a Star.” Our next stop was Disney’s Contemporary Resort where, after learning about the unique way the main concourse was assembled, we took a private elevator up to the recently redesigned California Grill, with modifications designed to celebrate the history of the space. We toasted to 50 years with mimosas, took in the sweeping views of the 43-square miles of Walt Disney World property, and learned about how Walt Disney and his associates bought the land in secrecy to try and get a value on the land. We had already traveled by land, so now it was time to take to the Seven Seas (Lagoon) via a privately chartered boat over the water bridge that connects the man-made lake to Bay Lake. Our guide shared some of the history of the Vacation Kingdom, even sailing us by the old wave machine that was used to offer surfing lessons at Disney’s Polynesian Village Resort in the 70s. As we approached Magic Kingdom, we were treated to audio from Roy O. Disney’s dedication speech for the grand opening of the park. Our first stop inside the park was Town Square Theater where Mickey Mouse recently resumed meet and greets with Guests, now wearing his EARidescent finest. We bypassed the queue to meet Walt Disney’s most famous character. Kelly pointed out some of the windows on Main Street U.S.A. that honor the people who helped secure the land for Walt Disney World, including this one with a nod to one of the aliases used to buy the land, “M. T. Lott.” 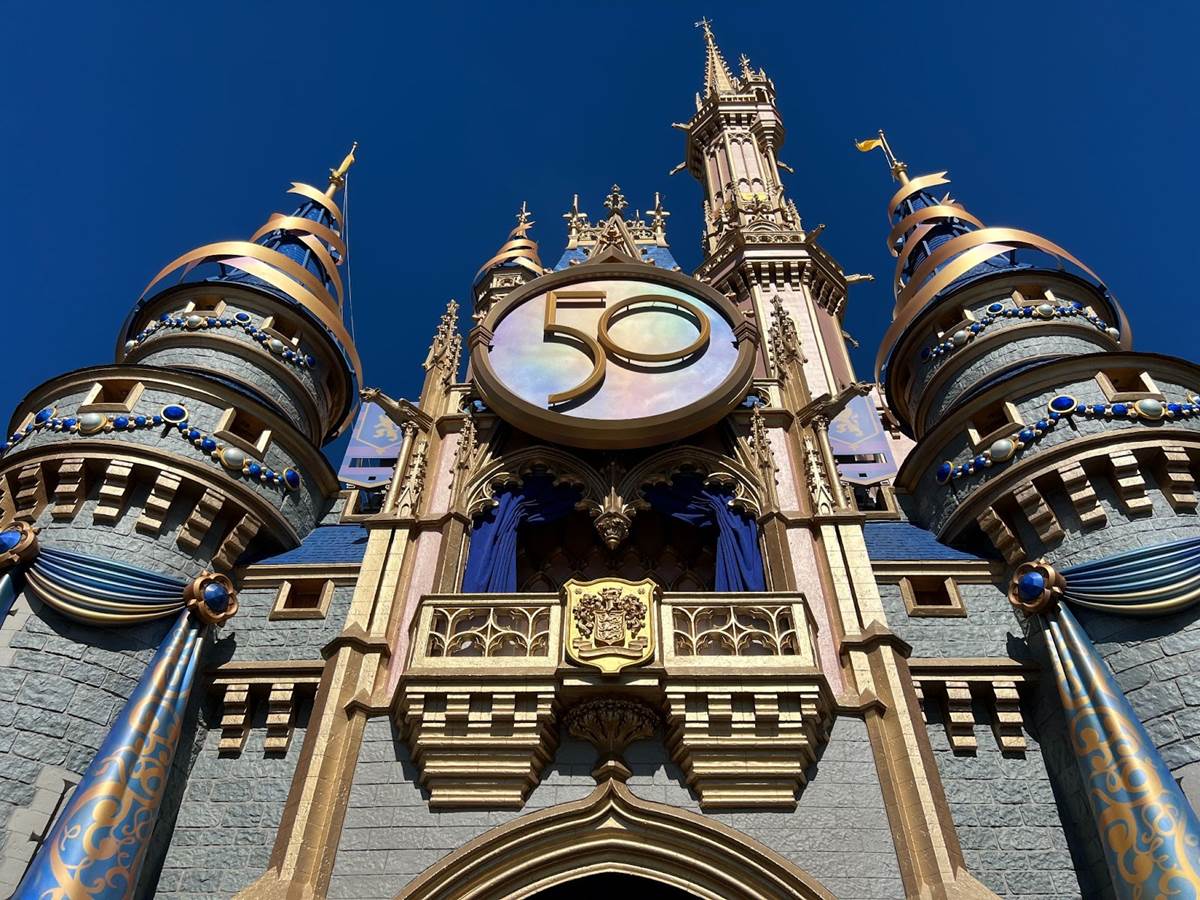 Furnished in 2007 as part of The Year of a Million Dreams, the suite is undergoing a few upgrades and so photos inside weren’t allowed, with the exception of a peek out the window at Fantasyland. 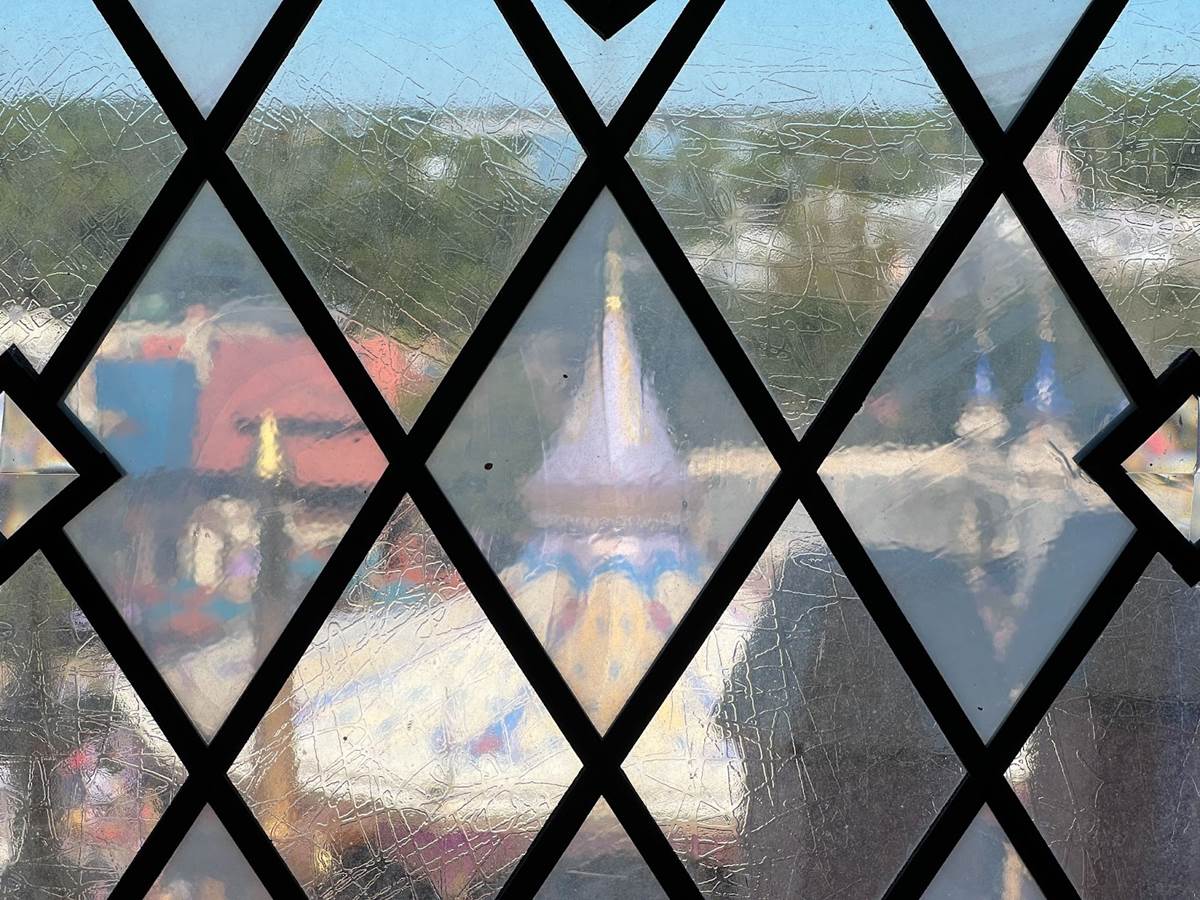 It was then time for lunch, which is included in the cost of the tour. Our order was taken before we sailed to Magic Kingdom so when we arrived at Be Our Guest Restaurant, our orders came out quickly. There was no limit to what we could order, including signature drinks in souvenir light-up goblets. For dessert, an assortment of cupcakes were delivered with a white chocolate rose full of “The Grey Stuff” (it’s delicious!). 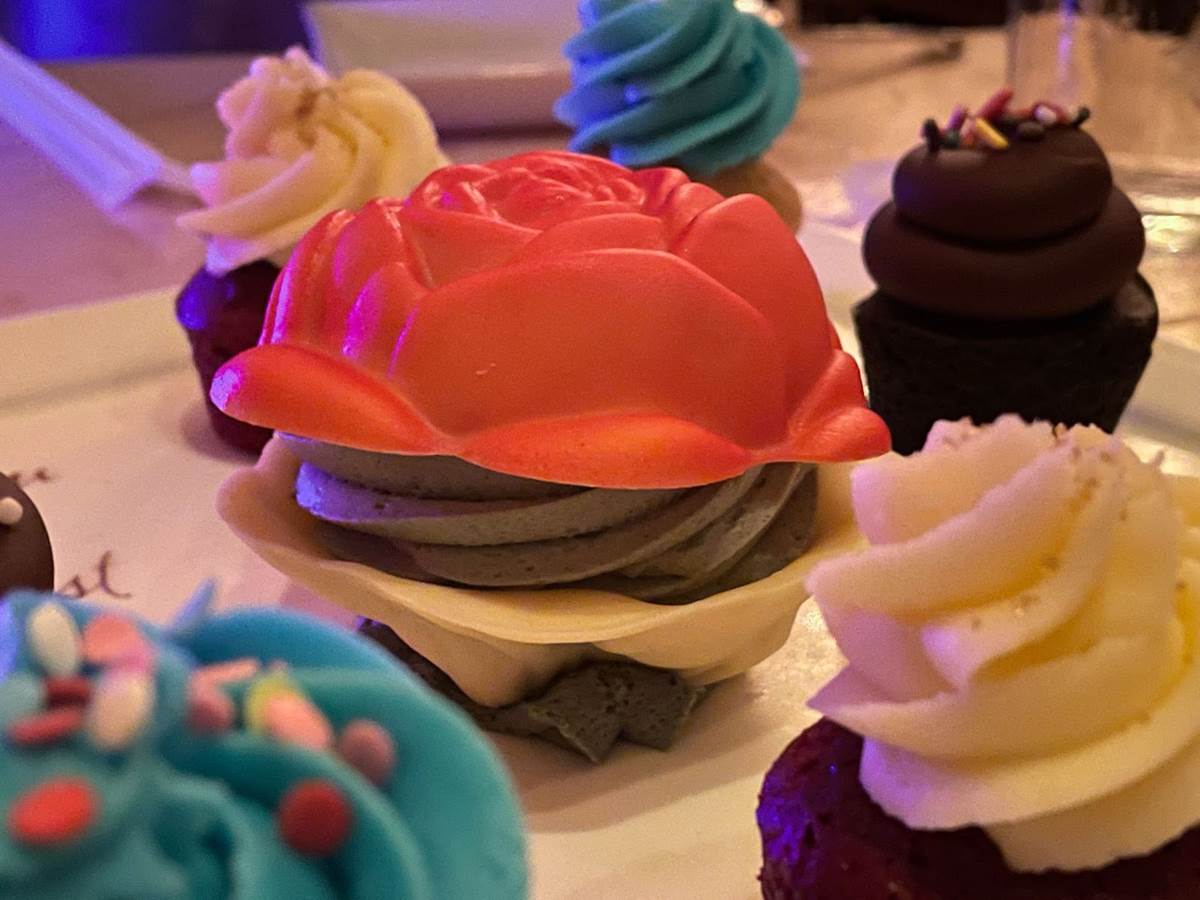 The first ride of the day Pirates of the Caribbean, which came with the history of the attraction and how Guests were so upset that it wasn’t part of Magic Kingdom when the park opened that plans for the Western River Expedition were scrapped to make way for it. Next, we walked to Liberty Square for a ride aboard a Doom Buggy in The Haunted Mansion. But the “Real” chills came later. 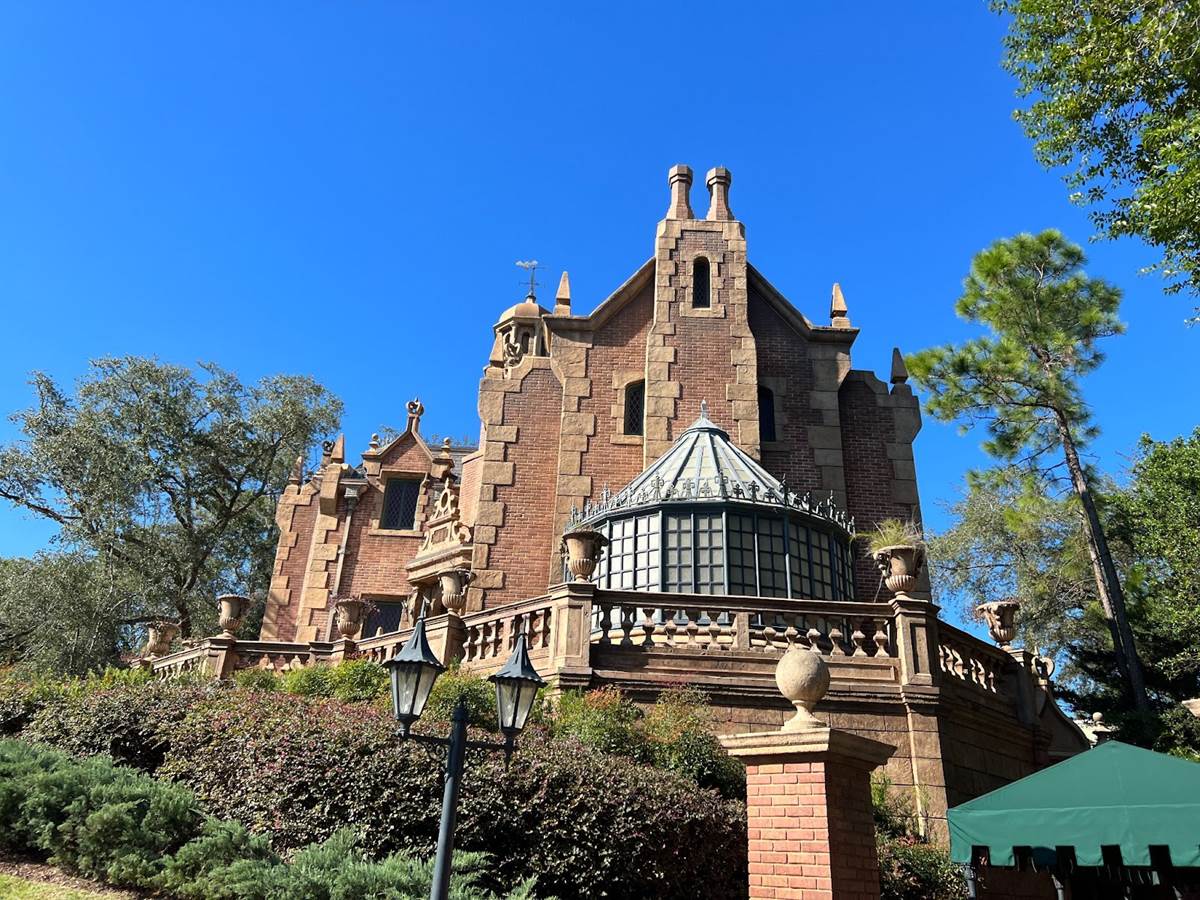 By far, the best part of the tour was when we stepped off our Doom Buggies and were brought backstage to the side of the attraction. No photos were allowed so I have nothing to prove that I got to do this, but we were taken underneath the ride track to see the figures that appear in the ballroom sequence through a Pepper’s Ghost effect. A railing kept us far enough away from the figures to catch the light and be seen by Guests onboard the ride. It was not only cool to see them all up-close and in-person, but also to learn that Abraham Lincoln is seated at the dining table (a blue variation of the figure from The Hall of Presidents), as is Carlos, the mayor being dunked in the well from Pirates, who is blowing out birthday candles rather than spitting out water. I get goosebumps just thinking about the fact that I got to go down there. 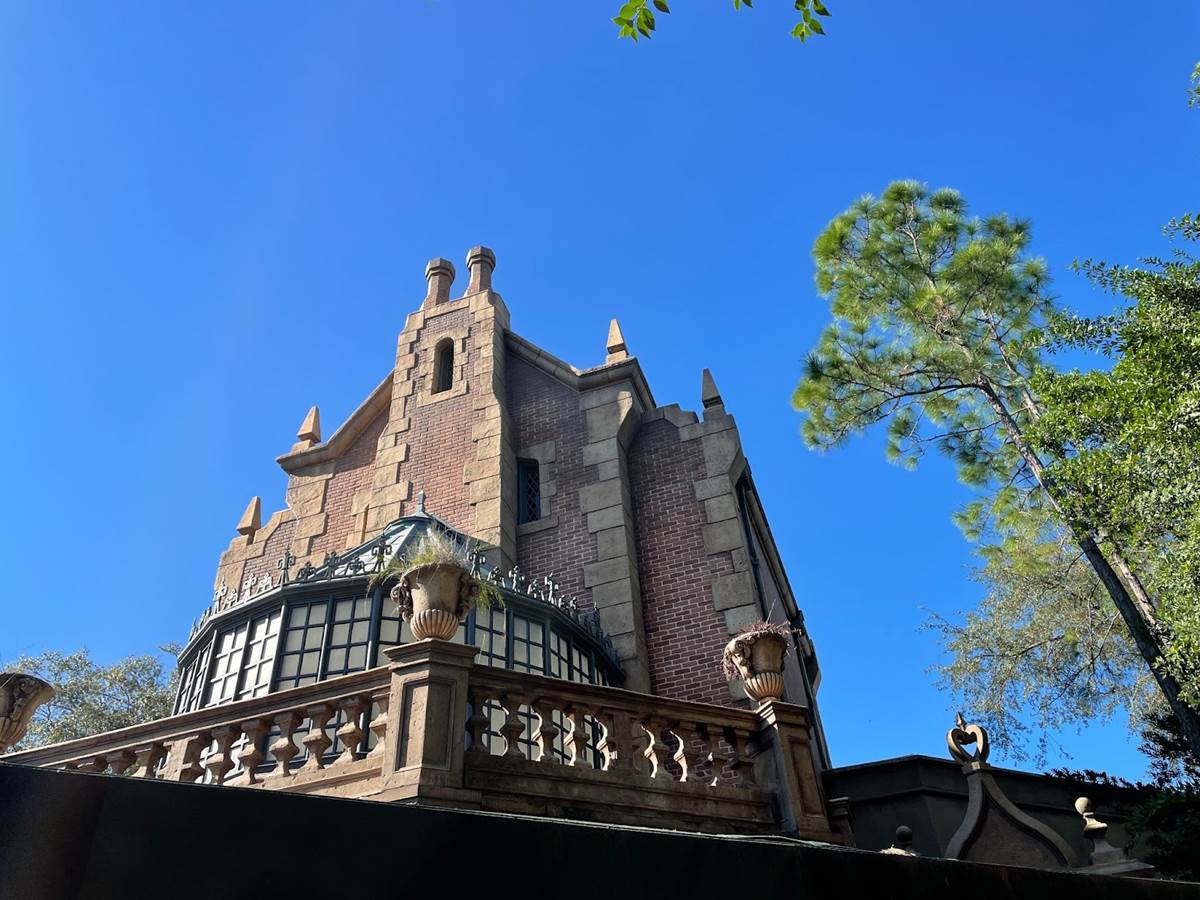 Another place we got to go down into was the Utilidors, also known as the “Tunnels.” We descended beneath Mickey’s Philharmagic underneath Fantasyland and took a walk down the center divide back to Main Street U.S.A., coming up behind the Emporium and getting a look at the “Backside” of Jungle Cruise. No photos are allowed in backstage areas, so you’ll have to take my word for it.

We traveled to EPCOT via Monorail, receiving our own private car on both the Magic Kingdom Express and EPCOT line. On the way into EPCOT, we were told that the Monorail slowed down just for us so we could get a longer view of all the work being done to transform Future World into World Celebration, World Discovery, and World Nature. On the theme of traveling by sky, after getting off Disney’s “Highway in the sky,” we were brought to the new restaurant Space 220 for a snack. After ascending the elevator for an omnipotent view of Earth, we were treated to two of the restaurants signature menu items (Blue Moon Cauliflower and Centauri Burger sliders), two dessert samples (Chocolate Cheesecake and Carrot Cake), and our choice of signature mocktail (The Milky Way, Moon Rocks, or Lightyear Lemonade), each of which came with a pack of souvenir trading cards. 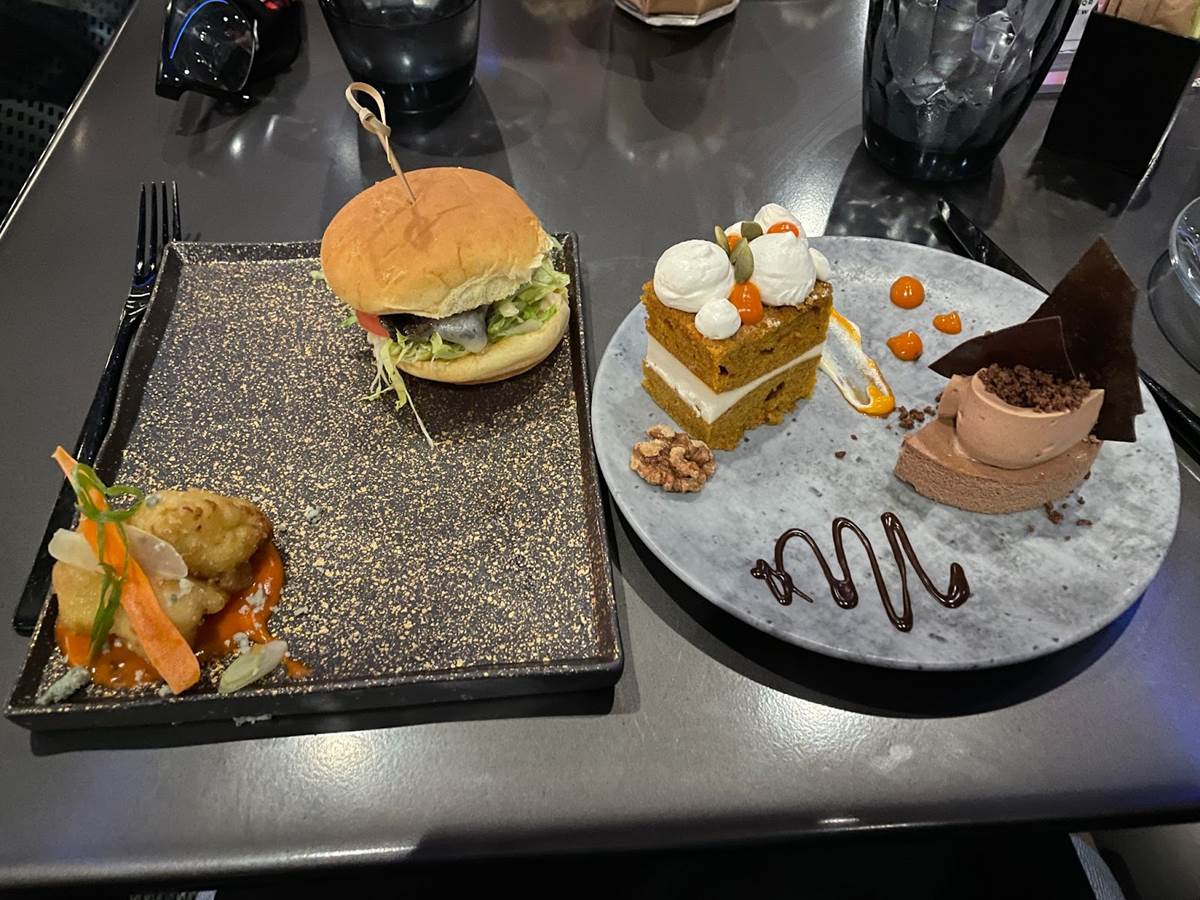 Following our return back to EPCOT, we went backstage to find the van waiting for us to drive us to Pixar’s version of Paris for a trip aboard the newest attraction, Remy’s Ratatouille Adventure, which opened with the start of “The Happiest Celebration on Earth. 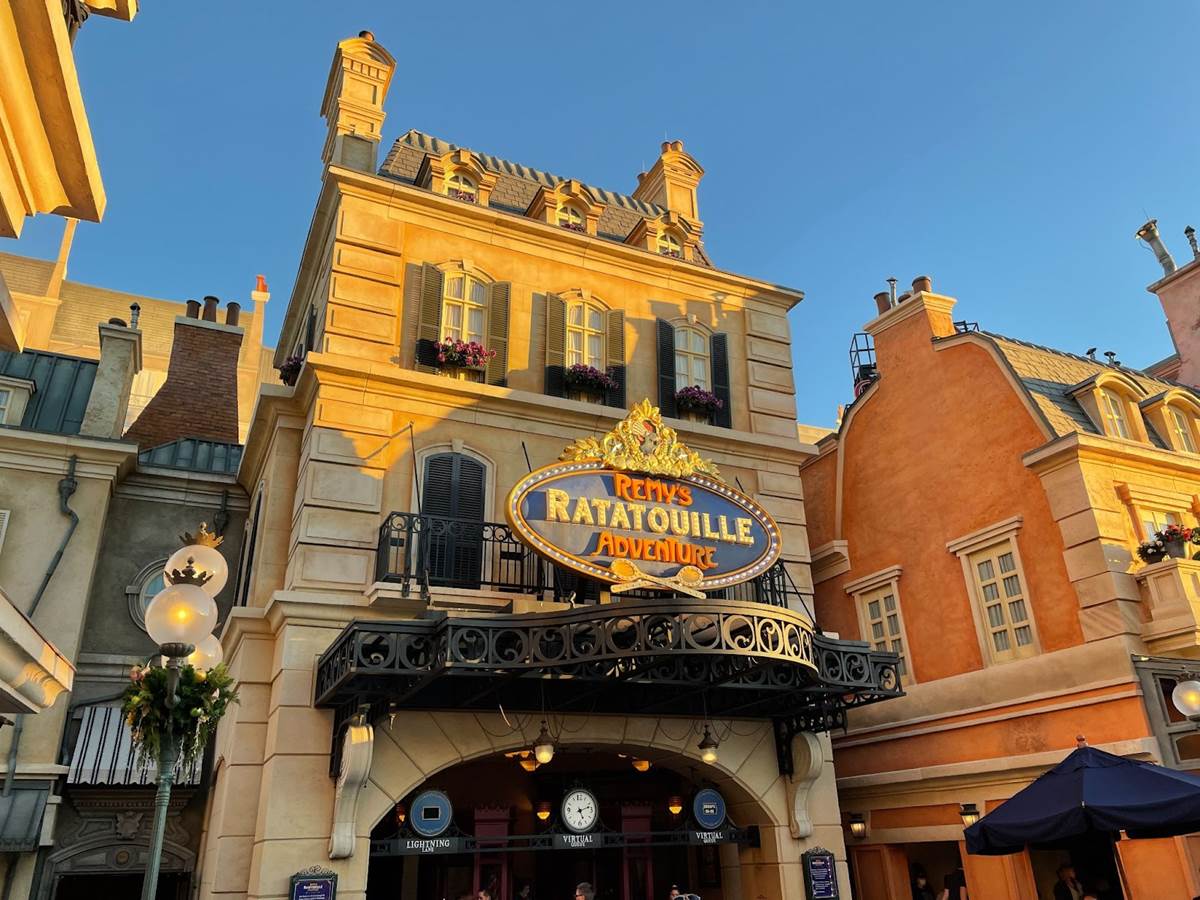 After transitioning from mouse-height back to human-height, our last trip in the sky was aboard Disney’s Skyway to Disney’s Caribbean Beach Resort, where the van was waiting to return us to Disney’s Fort Wilderness Resort & Campground. 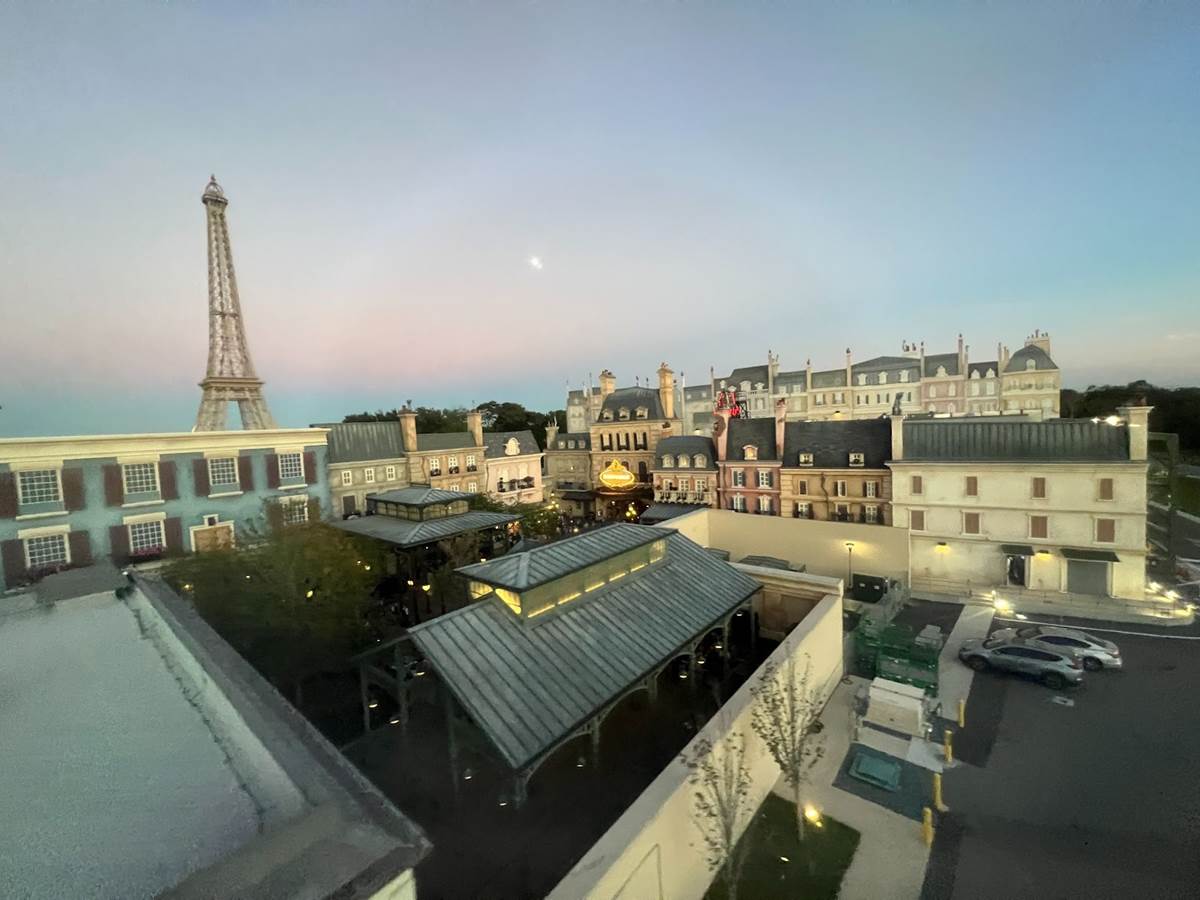 As a special parting gift, we were gifted our very own Main Street Window, exclusive to this tour (one per party). It’s branded with the 50th Anniversary Tour, reminds us of our trip “Across Lands, Skies & Seven Seas,” and thanks us for taking the tour. For more information about the 50th Anniversary Tour, visit the official website or contact your travel agent.