Hello and welcome to Laughing Place’s regular recap of new episodes of The Simpsons on the FOX network. This week’s installment, entitled “Portrait of a Lackey On Fire” (a reference to the 2019 French film Portrait of a Lady On Fire) is the eighth episode of the long-running animated sitcom’s 33rd season. 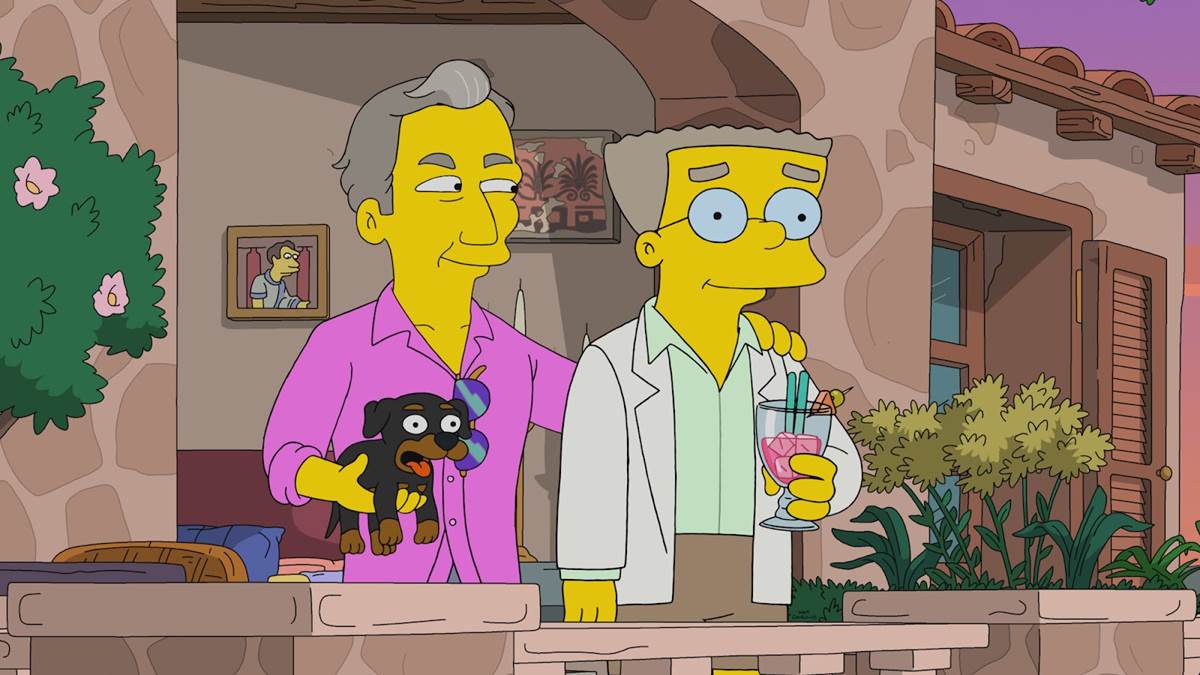 Couch gag: A live-action hand in time-lapse photography carves potato halves into portraits of the Simpson family members, then uses them as stamps to create their faces against a plain blue background.

“Portrait of a Lackey On Fire” begins at Burns Manor, where Mr. Burns apparently stores all his extra cash in the greenhouse and is now pacing the floor of the hounds’ quarters. Waylon Smithers congratulates Burns on the birth of eight new puppies– “four boys, three girls, and one who would prefer not to be labeled yet.” Burns orders Smithers to train the new dobermans to bite striking workers and brings in Homer Simpson as the new training dummy. Smithers is sad that Burns only sees him as a lackey, and Homer agrees that there’s “nothing worse than not being respected at work,” while he’s completely covered in biting doberman puppies. We see a montage of Homer’s new job continuing as he clocks in at the hounds’ quarters, goes home to Marge who tends to his wounds, and attends a retirement party at Springfield Nuclear Power Plant while still covered in puppies.

Eventually Mr. Burns decides that the puppies are ready to be distributed to his rich and powerful allies, so he looks through his pile of bribes from other billionaires and is confused by the gift of a jigsaw puzzle from Warren Buffet. Smithers explains that a puzzle is something friends do together and suggests that he and Burns try it out together, but instead Burns dismisses him to further tend to the puppies’ needs. While putting Neosporin on his cuts, Homer hears whining coming from the kennel, but instead of finding one of the dogs crying it turns out to be Smithers, who is upset because nobody loves him. Homer vows to find Mr. Smithers a “Man Marge” and flips through the “U.S. Male Service” dating app, only to suggest Smithers’ own profile to himself. Burns gives away the second-to-last puppy to an Middle-Eastern oil baron, and is ashamed of the final one because it won’t bite Homer’s “doughy face.” Homer is approached by a wealthy fashion designer named Michael DeGraff (voiced by guest star Victor Garber of Titanic and Alias fame) who says the puppy reminds him of his last boyfriend, which triggers a thought in Homer’s mind: “His last girlfriend was a boy?” Homer introduces Michael to Smithers, telling him he had questions about “what the puppy is looking for in a companion.” Smithers picks up on the hint and flirts with Michael, who asks him out to dinner in celebration of the puppy’s adoption. That night they go out to Luigi’s which reminds Michael of his childhood because of the “laminated menus, fossilized parmesan,” and “problematic murals.” Luigi offers to switch out the salt and pepper on the table for “pepper and pepper,” which makes Michael and Smithers laugh. Smithers admits he doesn’t know anything about fashion, which Michael finds refreshing.

Luigi and his homophobic mother watch from the kitchen, and Luigi shames her for putting a hex on the couple’s ziti, which also makes them laugh. Later they stroll to the end of the Springfield Squidport’s pier, where Smithers says airplanes won’t fly over the town “because of all the teens with laser pointers.” Michael says he’s cancelled his flight back to Milan in the morning, and the two kiss as red laser beams fill the evening sky behind them. We cut to Moe’s Tavern, where Homer gets a chill because he feels that his fix-up is working: “I changed the destiny of two human beings. I am a gay matchmaking god!” Lenny asks if Homer can do some straight matchmaking for him and Carl. “I’m a god, not a miracle worker,” replies Homer. At the Simpson house the next morning, Marge makes the kids lunch while Homer excitedly gossips with Smithers on the phone. 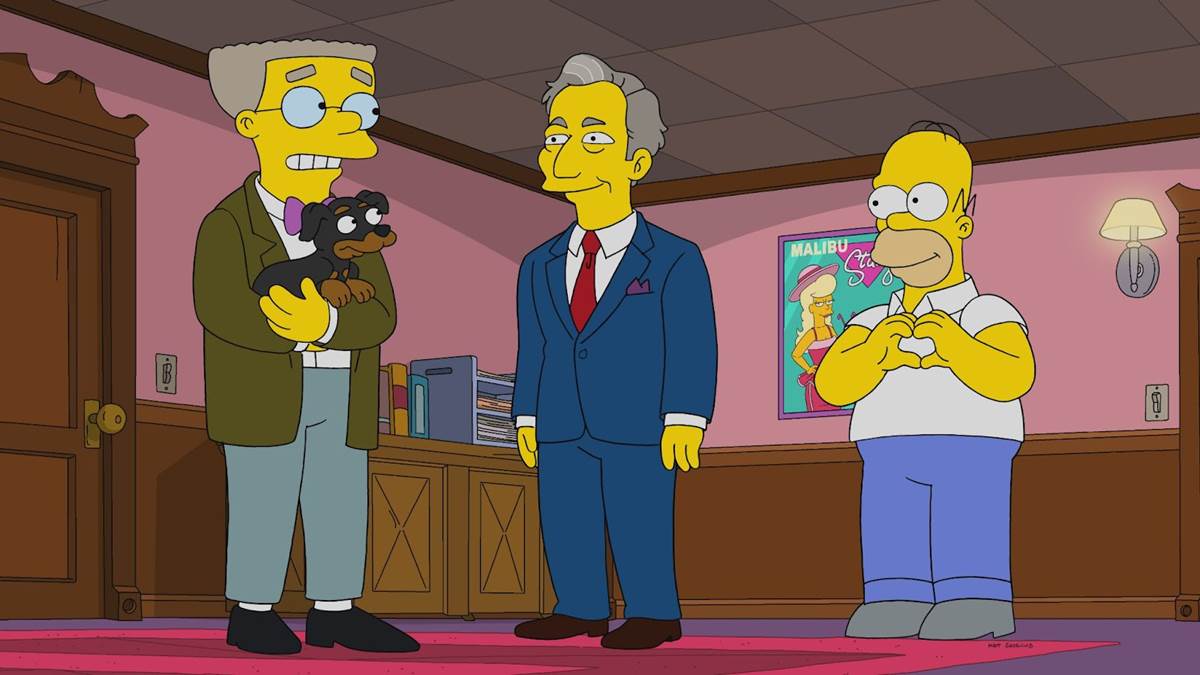 Marge is thrilled with Homer’s fix-up success: “I just have one question– can I ask you a thousand questions?” Homer says that Smithers has been dating Michael DeGraff for about six weeks, and Marge freaks out because she knows Michael as a judge on a reality competition show called America’s Got Fabric. She plays clips from the show for Homer, including Michael’s catchphrase “Now that is awful… gorgeous” and other zings. Homer tries to leave for work but Marge jumps on the hood of the car and demands to meet Michael DeGraff. Homer agrees, but only after the new couple gets back from their vacation together. We dissolve to a Mediterranean resort, where Michael has arranged for Christine Baranski from Mamma Mia to sing ABBA’s “Dancing Queen” for them and the puppy. Smithers returns to work at the beginning of the next week to find that Mr. Burns didn’t even notice he was gone.

Burns has become enamored with the concept of the jigsaw puzzle: “Monty Burns is on the case! The obvious first step is to sort every piece by weight.” Marge ambushes Smithers in the parking lot and asks him to tell her all about his new boyfriend. “It’s nice to finally be in love with someone good,” says Smithers. Marge offers to throw the couple a party, and Smithers agrees. We cut to the Simpsons’ backyard, where some of Smithers’ previous boyfriends have gathered to congratulate him, though one of them crushes a glass in his hand with jealousy. Helen Lovejoy asks Michael to give her one of his famous zingers, and he complies to her delight. He follows through on making fun of Patty and Selma, Bernice Hibbert, and Lenny and Carl, and everyone seems to enjoy it. Smithers asks Marge when she knew Homer was “the one,” and she replies, “After he got me pregnant.” Lisa tells Michael she doesn’t think fashion is super important, and Michael suggests some alterations to her dress. Lisa says she wears the same thing every day by choice, comparing herself to Ruth Bader Ginsburg, but once Michael is done changing her dress she immediately feels more confident: “I don’t even have a job, but I’m gonna go ask for a raise!” Smithers calls for a toast to the hosts of a party, and Michael announces that he’s going to manufacture his new retail clothing line in Springfield’s old fidget spinner factory: “If anyone needs a job, there are applications right next to the best coleslaw I’ve ever had!” Marge swoons with the compliment, and the crowd cheers except for Luigi’s mom. “I hate… because I hate myself,” she admits, and Luigi embraces her decision to come out to her son. Later, Homer, Bart, and Lisa drive past Michael’s new factory, where Barney Gumble is evidently now working.

Kirk Van Houten works at a station applying glitter to sunglasses, and Barney explains to Lisa that the excess glitter is expelled through the factory’s giant chimney stack. We see a flock of geese fly through the exhaust and crash to the ground in a tumbling pile. Gil works at the factory stirring a giant vat of chemicals, which he says is giving him a condition his doctor calls “living rigor mortis.” Lisa concludes that the factory is terrible for the environment, not to mention a sweatshop. “I thought gay people were supposed to be better than us,” says Bart, but Barney responds that Michael knows about the environmental complaints, pointing to a sign that advertises as much. Homer breaks down because his fix-up may not be as perfect as he thought: “My gay matchmaking reputation is ruined!” After Lisa scowls at him, he adds, “The human suffering is bad, too.” 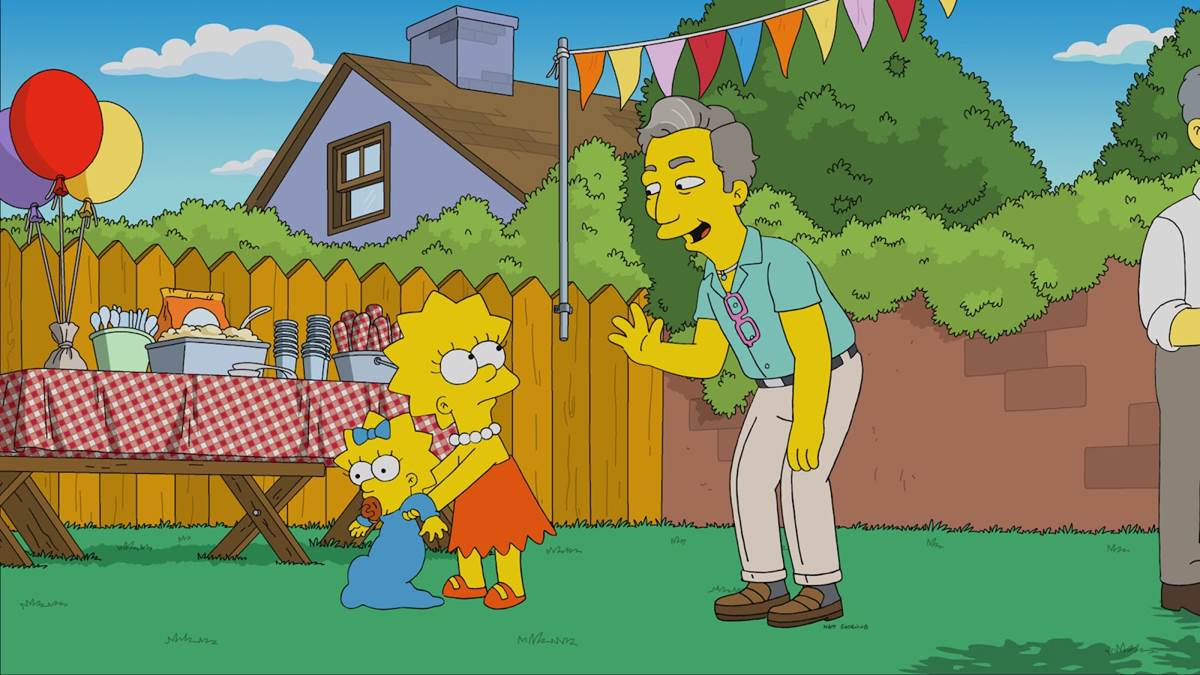 At Moe’s, Homer asks his bartender friend how he should go about telling Smithers the truth about his boyfriend. Moe says Homer tried to play god, and the workers from the factory all enter the bar to drown their sorrows. “I don’t feel so good,” says Barney, “I think I spent too much time in the tie-dye chamber.” He coughs up tie-dye onto a handkerchief, and Homer leaves to break Smithers heart. Smithers is hanging photos of himself with Michael on his office wall when Homer enters and opens the blinds to show him what Michael’s factory has done to Lake Springfield: the water is now entirely plaid. Smithers says Michael must have an explanation, but first goes to Mr. Burns to ask for advice about “the ethical challenges faced by business leaders.” Burns has finally figured out that the puzzle, once assembled, will form a “secret image,” but is immediately confused again when Smithers starts talking about his love life.

Mr. Burns can’t seem to grasp the idea that Smithers is gay, but once he hears that his boyfriend is Michael DeGraff, he comes around… sort of. “So you have to pretend to be gay… who cares? He’s a billionaire!” Burns takes Smithers to a giant “denim fire” and explains that Michael has made his fortune off of something that nobody needs: a constant stream of new skinny jeans. Burns fishes Blinky the Three-Eyed Fish out of a pond, and the fish is now dead: “Our toxins may have created the three-eyed fish, but we never managed to kill it.” Obviously he admires DeGraff for this and tells Smithers not to let him slip away. When Smithers arrives at Michael’s factory, it now seems to be causing a Chernobyl-level catastrophe in Springfield’s environment. Smithers tells his boyfriend his factory is “literally a toxic workplace,” but Michael tells him not to worry because he’s got “an amazing crisis management company.” “In fast fashion, whoever cuts the most corners wins,” Michael explains. “I can’t believe I fell in love with a monster,” exclaims Smithers, but Michael observes that he seems to have a pretty consistent type. “Exquisite,” Michael observes as he wiggles his fingers together and looks out over the destruction his factory has caused. “I love that you care about what’s right, but for once do what’s right for you.” Michael offers to take Smithers away from Springfield and adore him, which Waylon says would be a nice change. But after they toast to each other the puppy runs up and makes Michael spill wine on his pants, so he kicks it across the room. This is the last straw for Smithers, and he watches Michael fly away back to Milan while detritus rains down on Springfield. Homer and Marge try to comfort Waylon, but he says it’s going to take some time to get over Michael.

Smithers did get something out of the relationship, however: “Someone to be there when I come home, who will love me unconditionally.” He gives the puppy a bow tie just like his and says, “You’re the one hound I’ll never release.” The puppy licks Smithers on his nose, and he uses the photo as his new dating profile image, which gets him dozens of likes and messages on “U.S. Male Service.” In the coda, Mr. Burns finishes the puzzle to reveal a photo of a hot-air balloon, which infuriates him. “Yes sir, just like the picture on the box,” says Smithers. Having wasted months, Burns vows to get back to his usual evil deeds, but instead Smithers gives him a harder puzzle (with 100 pieces this time) and Burns tells him to “clear my calendar, lock the door, and turn up the Wagner!” 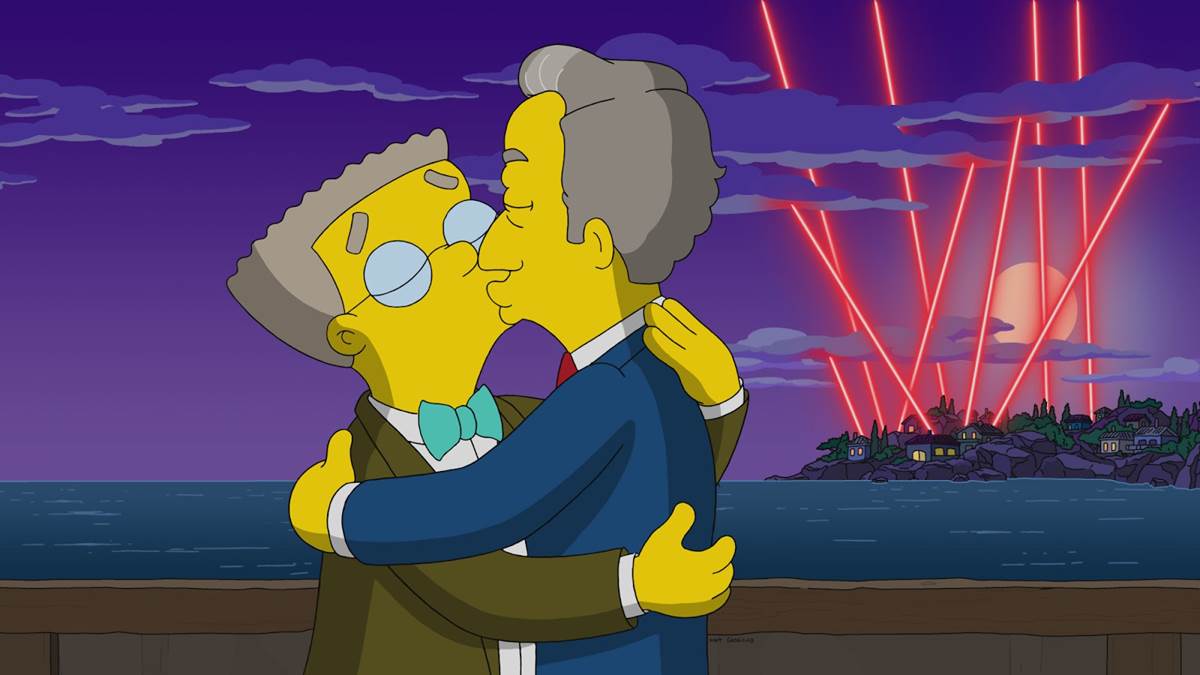