Welcome back to another “Ranked” article here on Laughing Place. This time we’re heading to the original SeaWorld in San Diego, California. Opening in 1964, the park has gone through numerous changes over the years. Following backlash from the Blackfish documentary, the park has wisely turned its focus away from animal shows and towards themed and thrill attractions. Over the last few years, we’ve seen the attraction roster be drastically increased into what we have today.

I won’t be including any of the “kiddie attractions” from the Sesame Street Bay of Play or Ocean Explorer areas in this list, nor will I be including the Riptide Rescue flat ride, as I haven’t ridden it. So with that, let’s countdown the Top 8 attractions at SeaWorld San Diego! 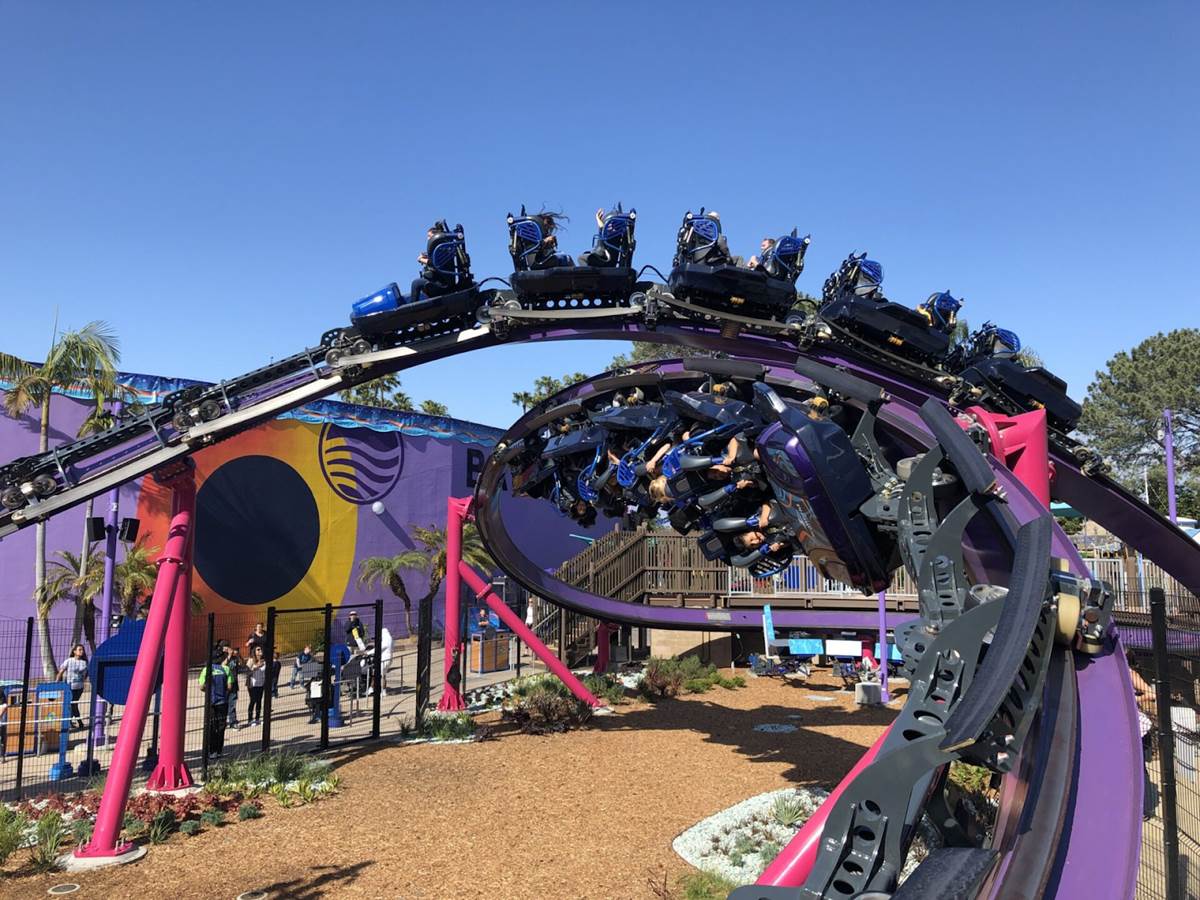 This truly is a weird “roller coaster.” The best benefit to Tidal Twister is that it takes up an extremely small amount of space, perfect for a landlocked park like SeaWorld San Diego. It’s a ride that takes a long time to get going, and then doesn’t really do much beyond that. Since the ride opened in 2019, it’s seemed to be closed more often than it’s been open, having not operated since before the pandemic. The attraction’s manufacturer, Skyline Attractions, has said on Twitter that they are working with the park to get Tidal Twister up and running soon, so we’ll see what happens there.

The largest attraction in the relatively new Ocean Explorer area, Tentacle Twirl is your typical wave swinger attraction, just like Silly Symphony Swings at Disney California Adventure. The ride features a fun color scheme and design that gives me strong Jumpin’ Jellyfish vibes. Otherwise though, there’s not much to say about this run-of-the-mill ride. The Skytower provides a six minute slowly rotating view of the beautiful San Diego scenery, including Mission Bay which the park is located next to. This is another attraction that has yet to reopen post-pandemic, but as it is the icon of the park, I can’t see them getting rid of this. Hopefully we’ll see the Skytower open again soon! One of SeaWorld’s earliest attempts at a well themed attraction is the park’s rapids ride, Shipwreck Rapids. Intertwined perfectly with the adjacent Shipwreck Reef Cafe, this beautifully themed rapids ride takes you through shipwrecks, caves and alongside some animal exhibits. My only complaint is a big one, that prevents me from riding it mostly every time is just how wet you get. There’s one waterfall that absolutely drenches you, no matter where you sit. If you’re visiting on a warm San Diego summer day, then be sure to check Shipwreck Rapids out. The Bayside Skyride offers one of the best views in any theme park anywhere, traveling over the water of Mission Bay and back. It truly feels like you’ve left SeaWorld and are just peacefully traveling into San Diego itself. The ride actually used to serve more of a transportation purpose, dropping guests off at the old Atlantis restaurant. Now however, the ride is just a pleasant scenic tour. A true gem at SeaWorld San Diego that I hope sticks around for a long time. 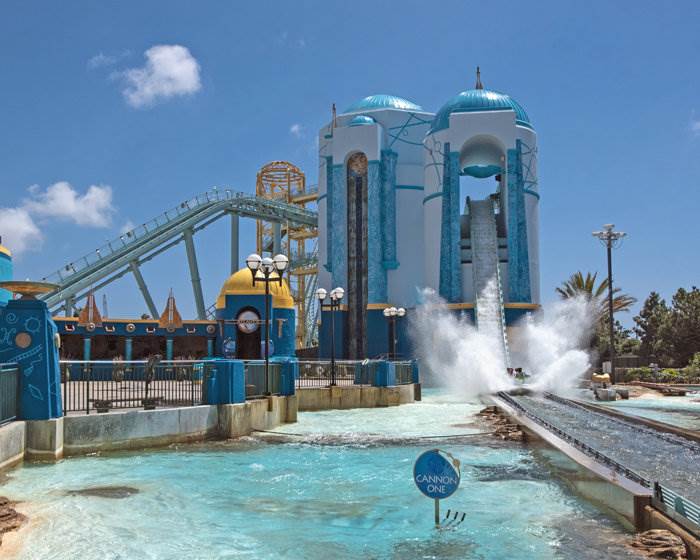 Believe it or not, Journey to Atlantis was SeaWorld San Diego’s first ever roller coaster. Which is more interesting considering it’s only really half a coaster, looked at more as a water ride. Not quite as extravagant as its Orlando counterpart, but far more than its San Antonio brother, Journey to Atlantis is a fun ride that doesn’t get you too wet. There’s a lot of moments you wouldn’t expect either, including a couple of brief coaster sections and an elevator lift. 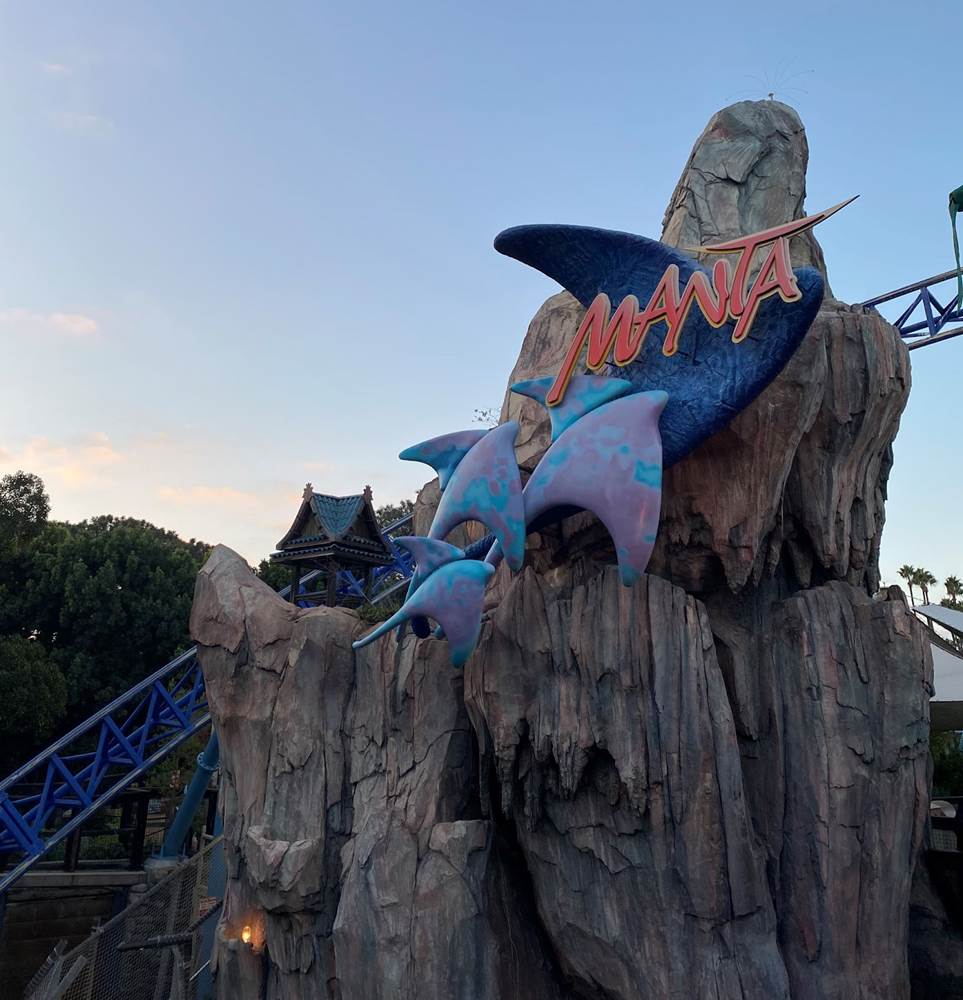 Although Journey to Atlantis was technically the park’s first coaster, Manta is the park’s first true coaster. At the time Manta was built, there was a strict height limit for coasters in the park, so Manta had to stick incredibly low to the ground. Creatively, that may have worked in the rides favor, as it features two launches to pick up some speed, along with dives into trenches and some fun airtime moments. The theming for this coaster is pretty great too, taking you through an aquarium filled with manta rays in the queue, up to a Polynesian themed station that looks like something out of Volcano Bay. The ride and area surrounding it also feature a fantastic soundtrack created just for Manta that always ends up stuck in my head. I’ll include the Spotify playlist for it below, so it can get stuck in your head too. Now we come to my current favorite attraction at SeaWorld San Diego, Electric Eel. This Premier Rides Sky Rocket II is truly a blast. Pun intended, as this compact shuttle coaster blasts you off with a forwards launch, then a backwards and then a final forwards, each with increased speed to get you up to the top of the structure. Honestly, this ride shouldn’t be as fun as it is, but yet here it is at #1. The hangtime through the barrel roll at the top and the airtime dropping off that element are both absolutely elite. Now the park’s new for 2022 coaster Emperor may end up giving Electric Eel a run for its money, but for now it stands as my favorite ride in the park.

I hope you all enjoyed this ranking of the attractions at SeaWorld San Diego. If you want to see some more theme park rankings, feel free to check out my other “Ranked” articles listed below: