Hello and welcome to Laughing Place’s regular recap of new episodes of The Simpsons on the FOX network. This week’s installment, entitled “Mothers and Other Strangers,” is the ninth episode of the long-running animated sitcom’s 33rd season. 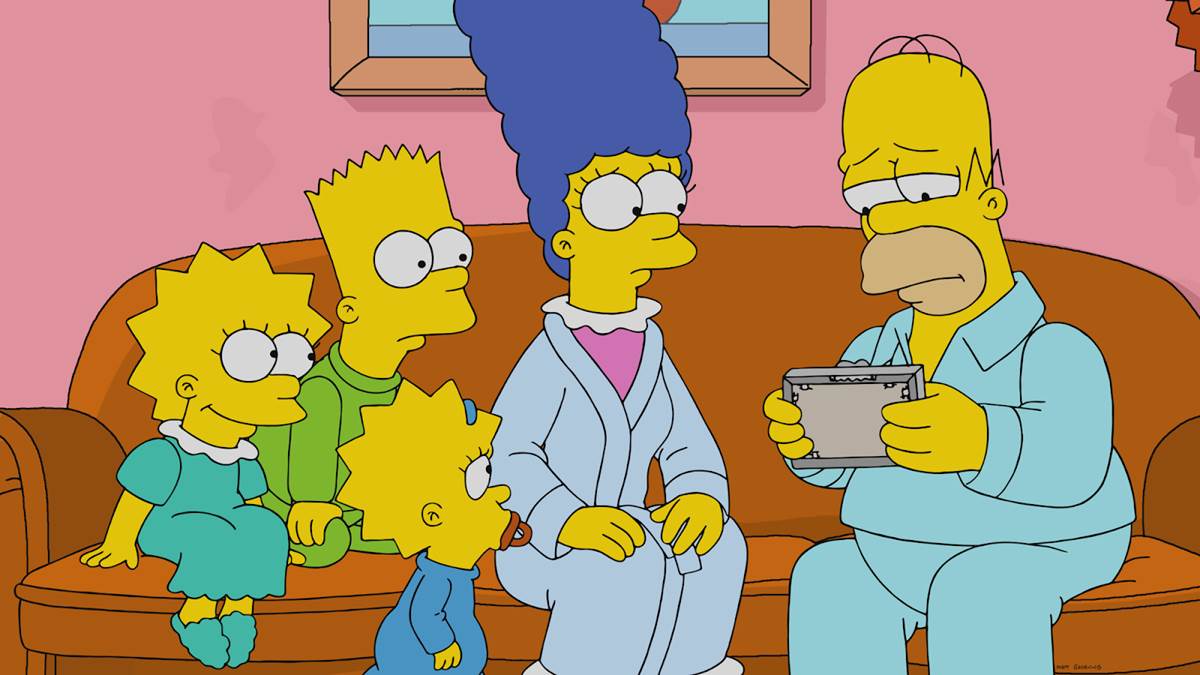 Chalkboard gag: None, but Shary Bobbins gets sucked into the “O” in The Simpsons logo.

Couch gag: The bodies of the Simpson family members have been contorted and compressed into the shape of a couch. With a “pop,” they revert back to their usual shape and run away off-screen.

“Mothers and Other Strangers” begins with Bart channel-surfing on the television (past such Disney-owned content as Alien and The Simpsons Movie) until he discovers “Muttflix,” the premium cable channel made for dogs. Santa’s Little Helper is excited by its existence, and Bart reacts the same way, confusing Lisa. Homer is also entertained by the channel, which gives dog’s-eye view perspectives on everyday activities. The dog’s mom is invited over for Mother’s Day to watch TV, and Lisa gives Marge a mug she made at school, which gets stuffed in a drawer among dozens of others. Bart’s mug isn’t quite as successful, and both Bart and Lisa are jealous that Maggie gets away with just giving Marge a kiss. When Marge is disappointed that he evidently forgot the holiday, Homer says he was going to make her breakfast in bed but the food always comes out bad. Instead he got her a picture frame with a nice photo of Bart, Lisa, and Maggie inside.

Homer starts crying because the framed photo reminds him of his own estranged mother. Marge tries to console him by reminding him he still has his father, which makes him cry even harder. Lisa says losing a parent is one of the most traumatic things that can happen to a child, and Bart jokes it off by commenting that “when Homer croaks, we’re gonna have to spring for an XXL elephant coffin.” Lisa suggests that Homer go to therapy for his grief, but when Marge says they can’t afford it, Lisa recommends “Nutz,” the therapy app for mobile devices. “Woohoo! I can confront my grief on the john,” says Homer excitedly. Homer selects “separation anxiety” from the list of available disorders, and we cut to the Nutz home office, where a Glengarry Glen Ross-type group of counselors bicker over who will take his case. “We’ve also got a jumper, a bedwetter, and a guy who’s still messed up because the Patriots traded Brady. And remember, if you get them to cry, you get a turn in the cash tornado.” 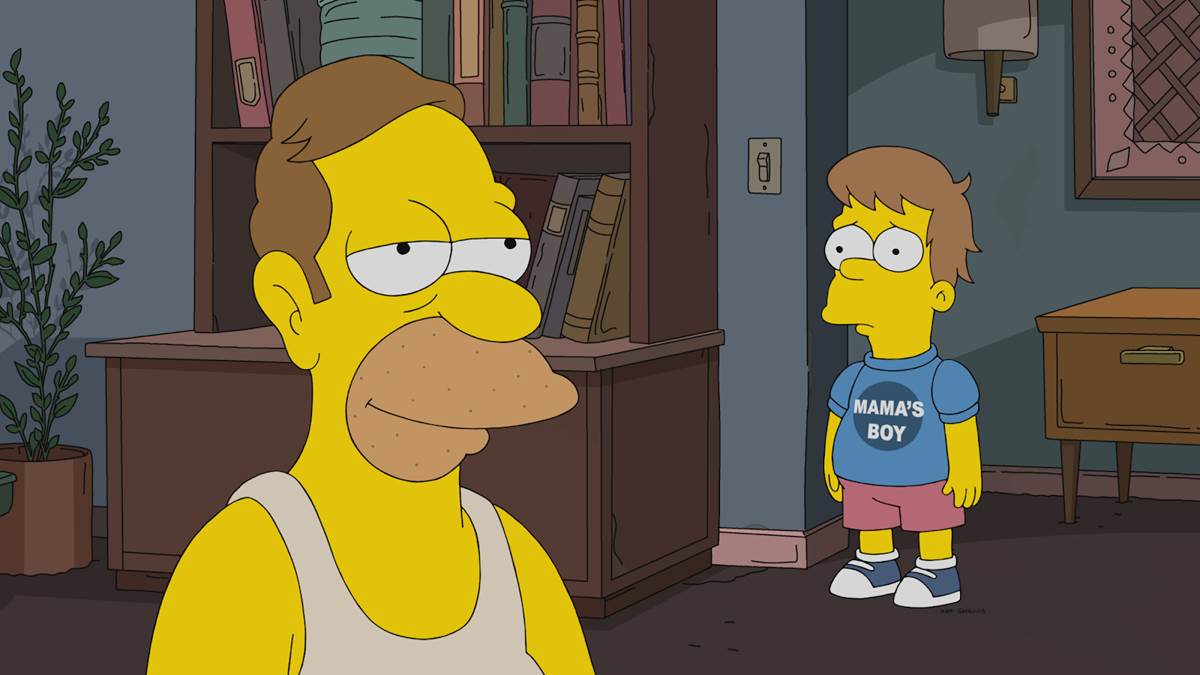 Homer’s counselor inspires him to flash back to the day his mother left when he was nine years old. Mona (voiced by returning guest star Glenn Close) leaves goodbye notes on the liquor cabinet so Abe will see them. Abe simply tells Homer his mother is dead, which makes him run off crying. In the present, Homer has to pay another 99 cents to access another flashback, this time at age 16 when he was learning how to drive. He crashes into a mailbox, sending his driving instructor Hans Moleman crashing through the windshield, and a young and svelte Officer Clancy Wiggum threatens to process him until discovering the concept of doughnuts. Teenage Homer receives a postcard from his mother, and he declares he’s going to find her. We see the inside of an FBI van, where two agents are thrilled that Homer is going to lead them right to Mona. Inside the doughnut shop, Wiggum finds out that the pastries are sold by the dozen, and one of the buttons pops off his shirt.

In the present, Santa’s Little Helper and his mother watch a dog-centric parody of Game of Thrones, while Homer is forced to upgrade to a “much better therapist” (Crazy Ex-Girlfriend star Rachel Bloom) after his current one tells him his problems are all his fault. The new counselor triggers a third flashback, with young Homer confronting his father concerning the truth of Mona’s whereabouts. Abe says he doesn’t know what happened to his wife, though we do get brief confirmation that the events depicted in the seventh-season episode “Mother Simpson” are still at least partially considered canon. Abe comes to the realization that he is ashamed at not being able to support her better. He dumps out his alcohol bottle and hugs his son, but Homer’s brain declares “this isn’t over.” He considers both the army and the church to no avail, so he sets out to find his mother in his father’s car. Abe stops him and warns him that his mother wasn’t perfect, but Homer convinces him that they should both search for Mona. They head out into the Utah desert, where– through unprecedented one-on-one conversation– Abe learns more about his son (like whether he’s right or left-handed and whether he likes TV or books) and they come to rest at a Mormon motel. A diner waitress tips Abe off over where he might find Mona, and they’re once again tailed by the FBI van. Along the way, Abe reveals that he only “stopped drinking at night,” but throws away a whiskey flash when he starts feeling remorse. Homer and his father lay on the hood of their car at night time counting the stars, and Abe tells Homer a story about the war, when a friend asked him to deliver his dog tags to his wife with his last breath. Abe realizes he still has the dog tags on a chain around his neck and tells Homer, “Let that be a lesson to you: don’t procrastinate.” He passes the dog tags along to Homer, who still has them around his own neck in the present. He laughs it off and gives them to Bart, who says he won’t let the 100-year-old woman down.

Homer’s therapist asks him if closing in on his mother brought up any fears, which triggers yet another flashback. We see Mona Simpson crumpling up one of her wanted posters at the gas station where she’s working. Homer and Abe pull up, and Mona is ecstatic to see her son, though she has trouble expressing it through the station’s microphone system. When she leaves the building to get closer to Homer, the FBI shows up and Mona makes a break for it. Homer and his father pursue her through a desert canyon until Abe gets stuck and urges Homer to continue on his own. Homer ponders this momentarily and ultimately decides to stay with his father. “I love you too, boy… but that was a dumb choice you just made!” The FBI agents approach Homer and Abe, attempting to climb over the latter to reach Mona, who jumps into a van with a hippie headed to San Francisco. “You ever think of all the violent criminals going free while we chase after this one woman?” one FBI agent says to the other. “That’s why I don’t read the papers.” 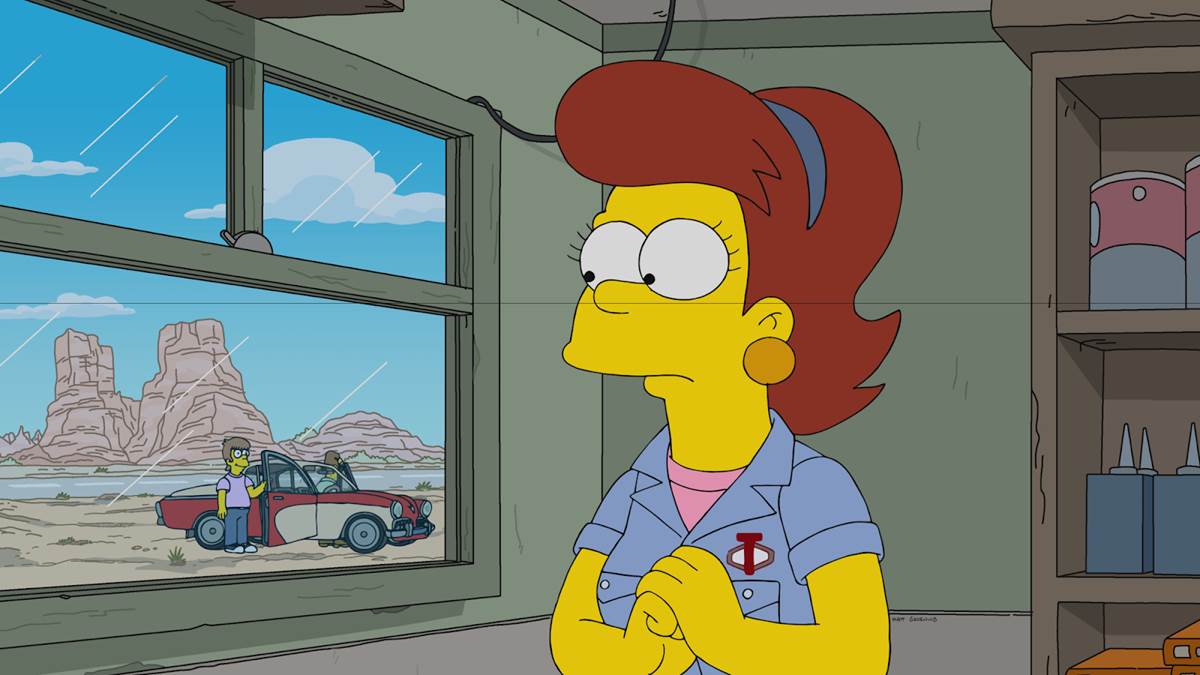 In the present, Homer realizes he could have gone after Mona and then returned to free Abe. We cut back to a montage of Homer’s miserable high school years, depicting him as being depressed due to losing his mother. We get a How I Met Your Mother reference, and Homer says his relationship with Marge is what really turned things around for him. His therapist is hesitant to let him leave it at that, but he hangs up on her anyway. “There’s a little more to this story… something I’ve never told anyone,” Homer says. “It happened when Bart was born. We see Homer attempting to cut the cord in the hospital, losing his patience in frustration. Later, Marge cuddles with newborn Bart, who moons Homer after he administers painkillers to help with Marge’s pain. “Everything I need is in this room,” says Homer, who starts to doze off when he sees a goateed doctor– obviously Mona in disguise– enter the room and hold Bart. She removes the disguise for a moment to wink at Homer, who cries tears of happiness.

“I even miss you sometimes,” the fake doctor tells Abe when he enters the room. In the present Homer wonders if his encounter with his mother that day was a dream. “It wasn’t a dream! I was there,” counters Abe. “There’s no reliable way I’ll ever know,” concludes Homer. The Nutz app tells Homer he’s found closure, though it comes partnered with a disclaimer that “closure” is no longer considered a valid psychological construct. The Simpson family has a group hug, and Homer says it’s the best Mother’s Day ever. Santa Little Helper drives the point home by bringing in a dead bird for his mother, who gulps it down in one swallow. Homer reveals he made reservations for the finest restaurant in town, where he is chastised for treating the kitchen like a buffet. In the coda, we see more Muttflix programming like “Whatever It Is, Eat It” and “Dropped Food.” Homer sleeps with photos of his mother and has a strange black-and-white dream. 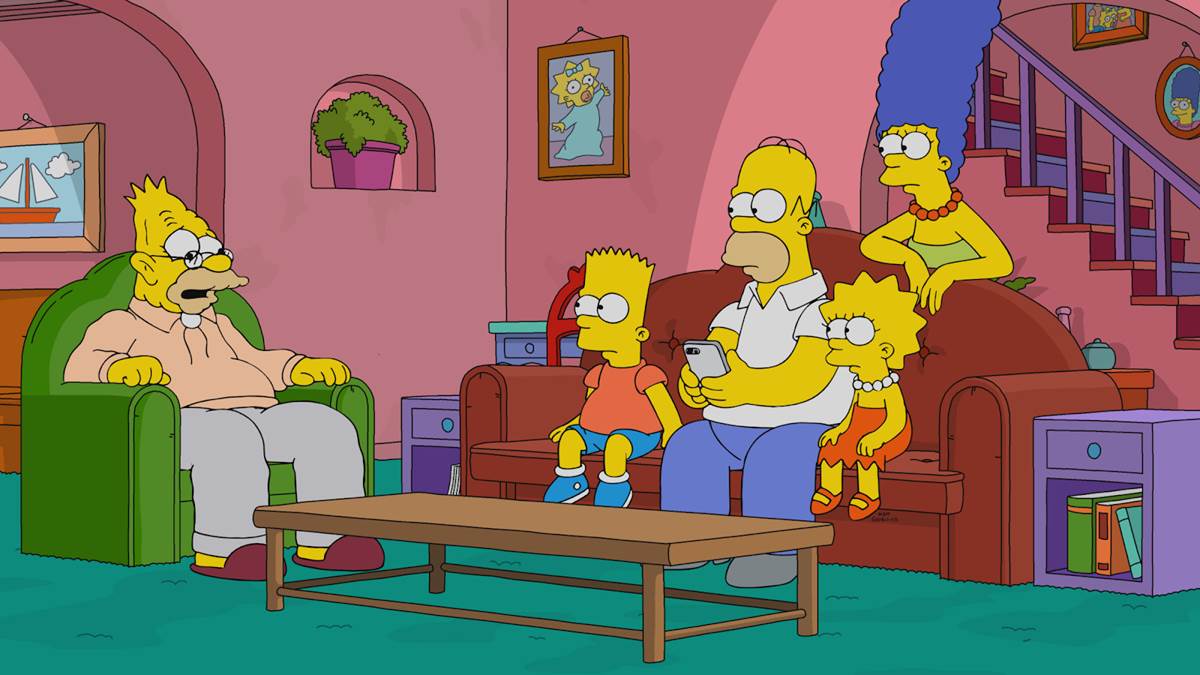