Comic Review – The Jedi and the Detective Partner Up in “Star Wars: The High Republic – Trail of Shadows” #2 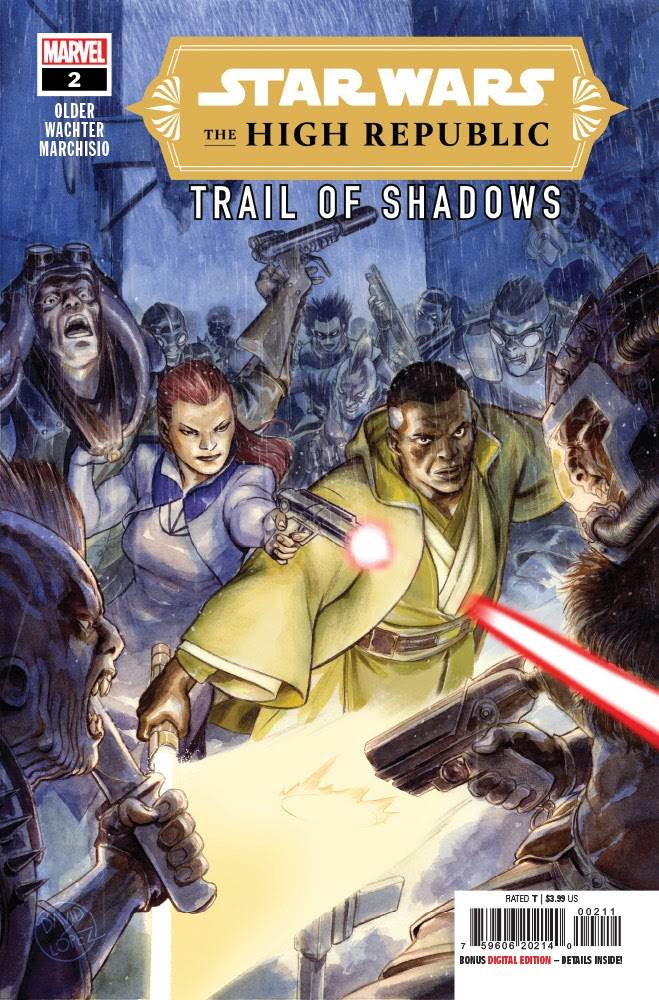 Even immediately after its first issue was released in October, the Trail of Shadows miniseries had immediately become one of my favorite things to come out of Star Wars: The High Republic. And thankfully, writer Daniel José Older and artist David Wachter have continued that standard of quality in the second issue, which came out last week.

Star Wars: The High Republic – Trail of Shadows #2 picks up where the previous installment left off, with Jedi investigator Emerick Caphtor flummoxed by his inquest into the death of Master Loden Greatstorm (as depicted in author Cavan Scott’s novel The Rising Storm), and private detective Sian Holt left with a case of post-traumatic depression after the death of her partner. 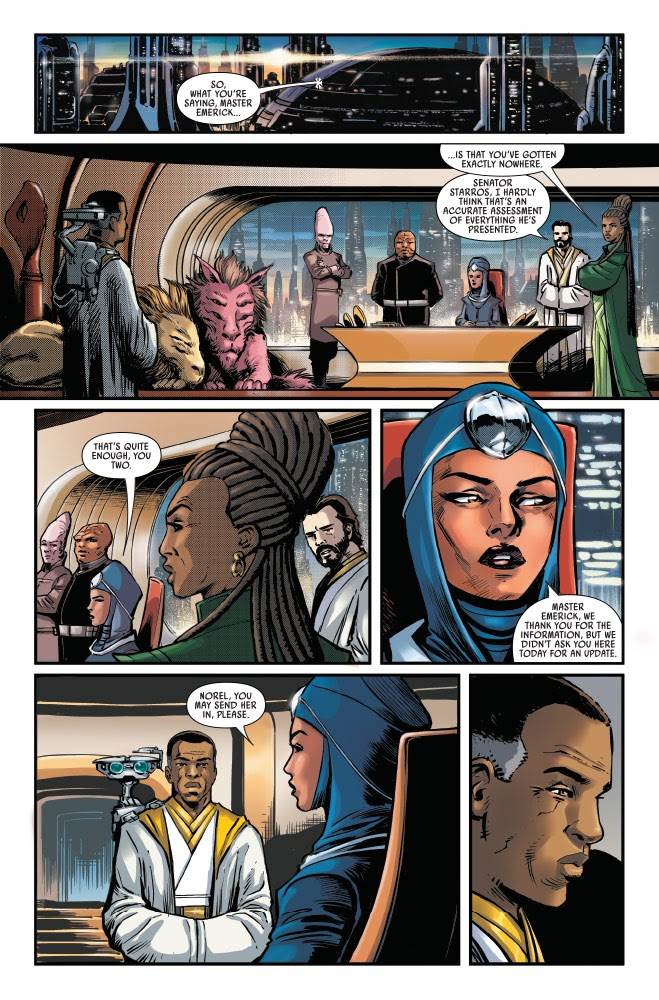 Caphtor and Holt are partnered together by the Republic’s Supreme Chancellor Lina Soh (almost acting in the police chief role for this Star Wars detective noir story) and dispatched to the underworld planet of Vorzyd V, also known as the Gambler’s Paradise– another location borrowed from the no-longer-canon Legends continuity. There, an undercover agent working for the Republic has made contact with a wanted criminal named Arathab Fal, though that meeting has– unbeknownst to our protagonists– ended with another murder mystery waiting to be solved. We get some good character-building moments between Emerick and Sian on their way to Vorzyd V, and a couple fun action sequences in dimly lit rooms and dark alleys when Fal enters into cutthroat conflict with the ruthless band of marauders known as the Nihil. The investigators follow some twists and turns in their case, and the issue ends on a cliffhanger that promises more intrigue to come next month. 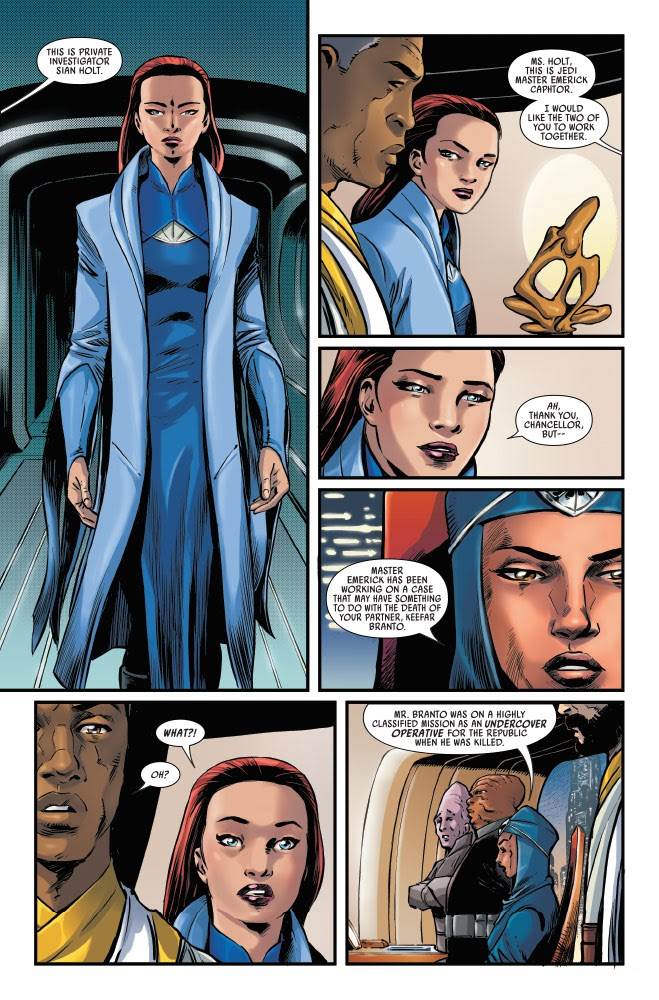 I just love this concept so much, and I kind of can’t believe it’s taken this long to get a tried-and-true noir detective murder-mystery story told in the Star Wars galaxy. I think there may have been an arc or two of The Clone Wars that came close to fitting that description, but nothing that fit the tropes so perfectly as Trail of Shadows does here. One can tell that Older is a fan of this genre (as it’s previously been well-established how big of a Star Wars devotee he’s been since childhood), and his passion for this mashup of subject matter shines through even in the darkest of Wachter’s panels, shaded to appropriate moodiness of tone by colorist Giada Marchisio. The lead characters are superbly rendered, both from a writing and artwork perspective, and I’m already getting a kick out of how they bounce off each other in pursuit of the truth behind these deaths. I’m looking forward to finding out more about the villain and his connection to whatever terrifying hidden menace has plagued the Jedi since the battle of Grizal, and I’m absolutely confident that the crack investigative team of Caphtor and Holt have the combined deductive prowess to solve this intriguing mystery. 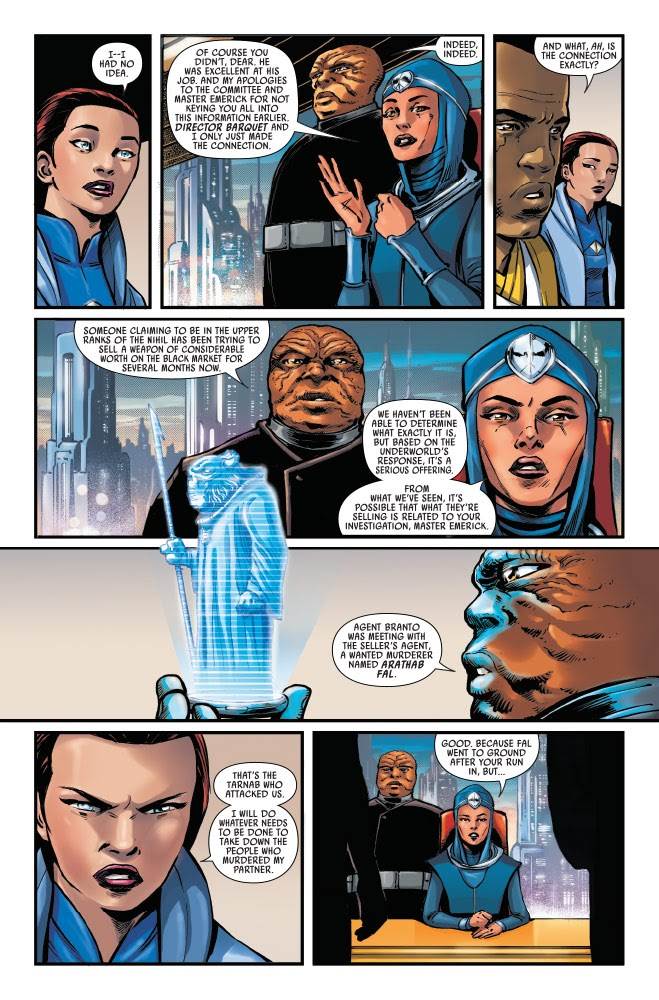 Star Wars: The High Republic – Trail of Shadows #2 is available now wherever comic books are sold.