The holidays are in full swing at the Disneyland Resort and the Walt Disney Family Museum hosted a festive virtual event about the ways they’re celebrated at “The happiest place on Earth.” With special guest Susana Tubert, Disney Live Entertainment Creative Director for Cultural Festivals and Celebrations, it was an hour of festive fun, and a good dose of history, too. And like all things at WDFM, it all began with Walt Disney. 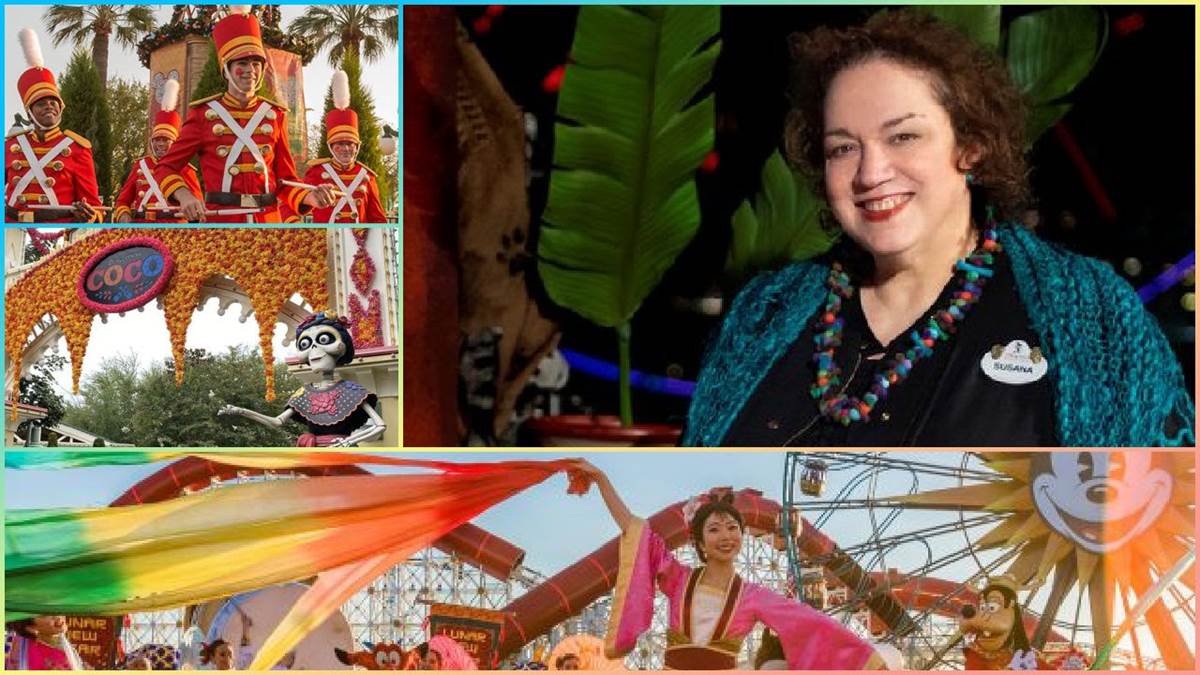 From the earliest days of Disneyland, Walt Disney invited cultural groups of all over California to perform in the park, creating a safe space for diversity. Starting in 1957, the annual holiday parade titled “Christmas in Many Lands” premiered, which ran until 1964. The parade featured floats and performers from cultural organizations and the lineup was ever-changing based on each group’s availability. Sometimes you may have seen an elephant being ridden down Main Street, U.S.A. from an Indian-American group, or a float with traditional Japanese Noh theater performers.

In July of 1963, Disneyland kicked off a 3-month long event on Center Street called “Salute to Mexico.” Walt Disney was on hand for the first day of the festival, with special guest Miguel Alemán Valdés, president of Mexico at the time. The event featured women in Oaxacan dresses teaching children about piñatas while mariachi bands filled the streets with music. There was also an exhibit where Guests could see traditional and contemporary Mexican arts and crafts on display. The event was sponsored by People to People International and was so successful that it was repeated. More cultural festivals followed in the park themed to Japan, Korea, and Canada.

Walt Disney’s vision for EPCOT became partially realized through the theme park at the Walt Disney World Resort that exists today, including a World Showcase of cultural exploration. When Disney California Adventure went through its series of changes in 2013, the creative team had a dream to differentiate the cultural festivals at the park from EPCOT to be unique to California. That’s where Susana Tubert comes into the story.

Originally from Buenos Aires, Argentina, Susana moved to New York City after graduating high school and followed her grandmother’s artistic legacy by working in the theater. Prior to joining Disney, she founded a nonprofit organization called Theatro Stage Fest, an international theater festival. But when the opportunity arose to bring cultural celebrations to Disneyland Guests, it was an offer she couldn’t pass up.

Many of Susana’s ideas aligned with the types of cultural experiences Walt Disney offered to the earliest Guests at Disneyland. Creating an “Immersive Festival Model” as a framework for each celebration, Susana was given three months to put together her first event, ¡Viva Navidad! First presented in 2013, the event is a celebration of the Latinx community in Southern California, themed around The Three Caballeros. In a street party that has been running for eight years during the holidays, Panchito from Mexico brings in mariachi musicians, folklore dancers, and giant Mojigangas puppets. José Carioca from Brazil then calls in a samba group and Afro-Brazilians dancers to join in. With Donald Duck and Mickey and Minnie Mouse joining the fun, ¡Viva Navidad! allows Guests from outside the culture to join in the fun, which is extended throughout Paradise Gardens Park. Guests can experience ¡Viva Navidad! this holiday season through January 9th, 2022.

Feedback was so overwhelmingly positive from ¡Viva Navidad! that Susana was next tasked with revamping the way the resort celebrates Lunar New Year, which it had done for many year previously. Once again, Susana realized that the best access point to the celebration was through classic Disney characters and she placed Mulan at the heart of the celebration, with a new show called Mulan’s Lunar New Year Procession. A Disney character is chosen to match the Chinese zodiac animal celebrated that year and in 2022, the year of the tiger, the special character included will be Tigger. As the Lunar New Year Festival has expanded, live performers have been added on weekends to bring musical styles from Korea, Vietnam and China to park Guests. Interactive experiences including writing on the Wishing Wall, photo opportunities with Disney Characters in special costumes, calligraphy artists, and a marketplace serving limited-time food offerings. The celebration returns in 2022, running from January 21st to February 13th.

Over the years, ¡Viva Navidad! grew in popularity and a festival was born around it, Disney’s Festival of Holidays. The event incorporates all of the winter holidays celebrated throughout California: Christmas, Navidad, Diwali, Hanukkah, and Kwanza. Debuting in 2016, festival decor uses the shape of Mickey’s head as a template to provide themed banners for each holiday. Another street party was added called Mickey’s Happy Holidays, featuring toy drummers. Liver performers include acts unique to Diwali, Navidad, Christmas, Hanukkah, and Kwanza. Guests can sample foods from the different holidays at the Festive Foods Marketplace and make paper crafts at tables that also educate. Festival of Holidays is currently running through January 22nd, 2022.

What started as a synergy promotion for the then-upcoming Pixar film Coco in 2017 has become an annual fall tradition at Disney California Adventure, Plaza de la Familia. Susana refers to is as “The spirit of Dia de los Muertos,” transforming Paradise Gardens into a Coco-inspired celebration each year. A live performance called A Musical Celebration of Coco incorporates the songs and story from the film, but Susana recalls that when it was first introduced ahead of the film’s release, they had to be careful not to reveal Ernesto de la Cruz’s true character. The performance includes the Mariachi Divas and other highlights include themed food and beverage offerings, Alebrije paper crafts, the Arbol de la Vida (Tree of Life) based on Mexican clay folk art, and adding to the Memory Wall.

Throughout the presentation, Susana Tubert would share meaningful feedback that had been collected from Guests about each experience. But as a fitting close to the presentation, the last one came from a Cast Member of Mexican-American descent. They wrote that working at the Plaza de la Familia event gave them an outlet to feel proud of their heritage and a way to share it with Guests. With Disney focusing more on diversity and inclusion, it was a fitting note to end on.