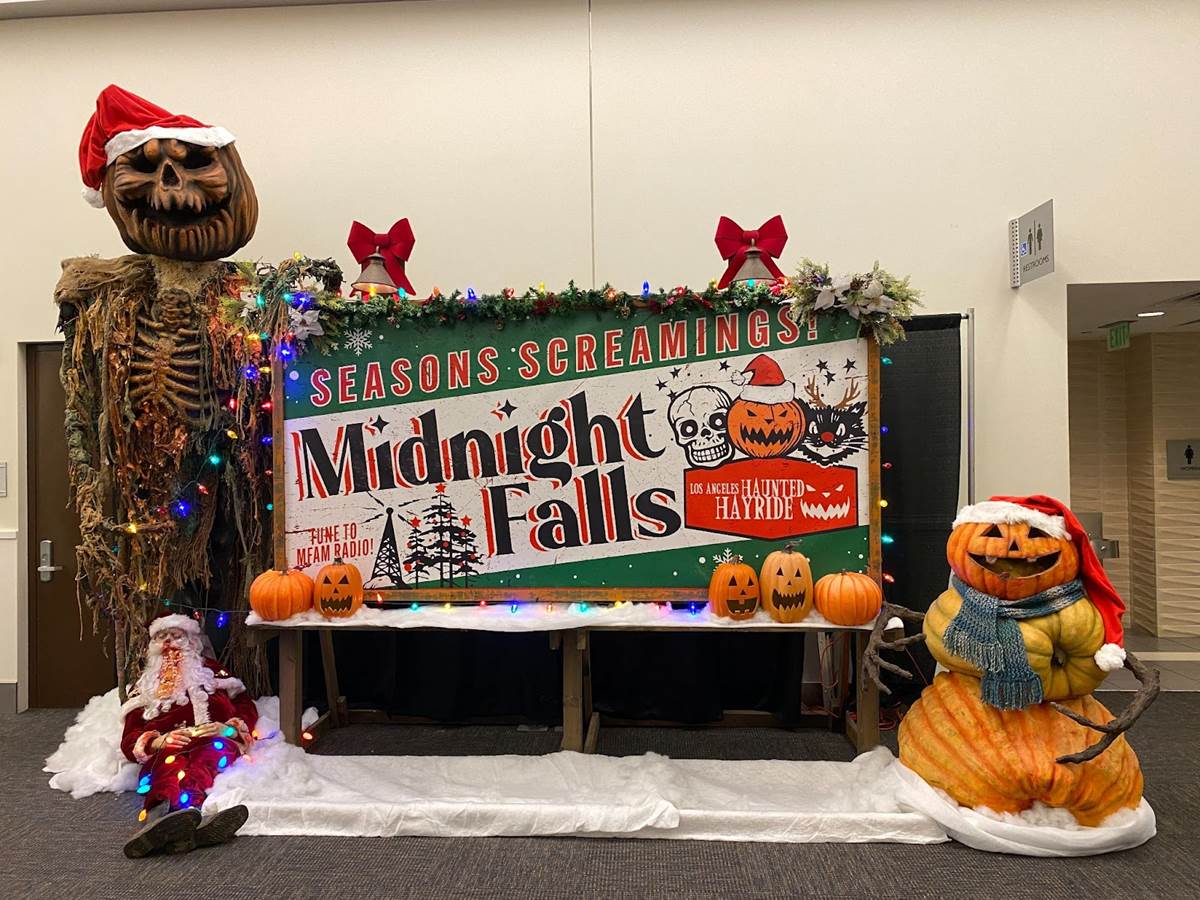 Due to the ongoing pandemic, the popular Southern California Halloween convention Midsummer Scream was forced to postpone its annual event until 2022. But thankfully, the organizers of the convention were able to put together two smaller versions of the event this year in its stead: Awaken the Spirits– which took place this August– and Season’s Screamings (held over this past weekend at the Pasadena Convention Center), which combined Christmas and Halloween themes for three days of festive frights.

I had the pleasure of attending Season’s Screamings as media and I walked away with a mashed-up holiday smile on my face, seeing as how Halloween and Christmas are two of my favorite times of year.

Walking the exhibit hall floor in the convention center, it was easy to see how excited people were to be back at this type of event again, though everyone was of course playing it as safe as possible by adhering to local COVID-19 regulations and protocols. In addition to the usual Halloween and horror memorabilia, I saw booths featuring familiar Christmastime characters like The Grinch and the Mayor of Whoville, plus vendors selling nifty Disney-centric collectibles like replicas of Haunted Mansion animatronics and paintings depicting the lobby of The Twilight Zone Tower of Terror’s Hollywood Tower Hotel (of course I couldn’t resist picking up a print of this one for myself).

On the Main Stage, Season’s Screamings hosted a number of panel presentations and discussions about both Halloween and Christmas content, and nothing represented that combination better than the fascinating behind-the-scenes look at Disneyland’s Haunted Mansion Holiday attraction overlay hosted by acclaimed themed entertainment designer Garner Holt.

Season’s Screamings guests could take a break from browsing the exhibit hall floor or watching presentations on the Main Stage by visiting The Hall of Yuletide Spirits, where Southern California haunters took the opportunity to create some really wonderful spooky seasonal offerings like creepy walk-through mazes and eye-catching displays.

The last panel I attended on Sunday evening was “The Making of Muppets Haunted Mansion” featuring filmmaker Kirk Thatcher, who directed the hit Disney+ special that came out in October. While attendees weren’t allowed to shoot video of the presentation or take photos of Thatcher’s slideshow, I learned some very interesting pieces of information like the fact that Muppets Haunted Mansion was originally planned as a 90-minute made-for-Disney+ movie (though plans obviously changed after the pandemic hit) and that the song “Life Hereafter” performed in the mansion’s ballroom was once titled “Be Our Ghost” (but the Disney legal team wouldn’t clear the name). I also took note of the exceptional design that went into Season’s Screamings’ Main Stage, with some really cool-looking Christmas lights and other holiday decor.

Midsummer Scream is scheduled to return on the weekend of July 29-31 at the Long Beach Convention Center. For additional information, be sure to visit the convention’s official website.