Beyond the Berm: GardenWalk Reborn

Let’s take a stroll down memory lane today. Fans of the Disneyland Resort may remember a time before Disney/’s California Adventure, when the Happiest Place on Earth consisted of Disneyland Park, Disneyland Hotel, Disneyland Pacific Hotel (circa 1995), and was surrounded by motels, hotels, chain restaurants and all the neon lights and less than desirable aspects that came with it. As part of the Disneyland Resort Expansion that saw the addition of the second theme park in Disneyland’s Parking Lot, as well as the addition of a parking structure on the former Disneyland Campground (yeah, that was a thing), the Walt Disney Company and Anaheim worked together to create the Anaheim Resort District. 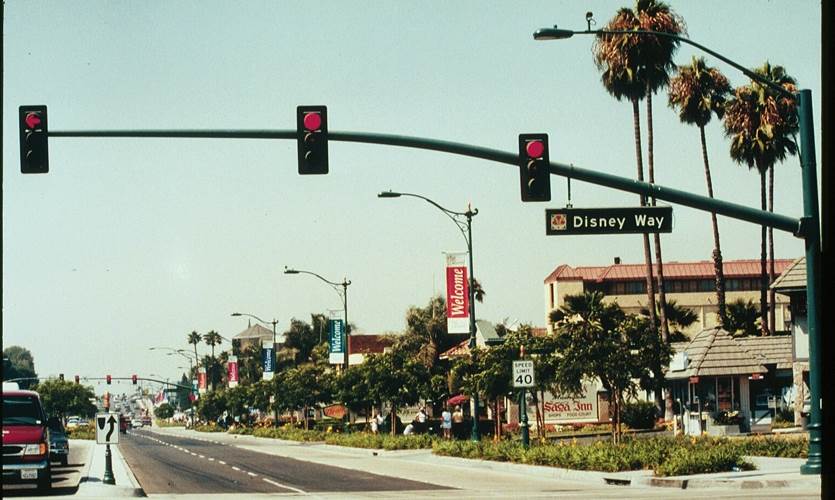 As part of this, all the gawdy signs and neon were pulled, and the whole area surrounding the new Disneyland Resort would have building codes with height restrictions and other regulations to make this part of the city as a whole more desirable and better to look at. 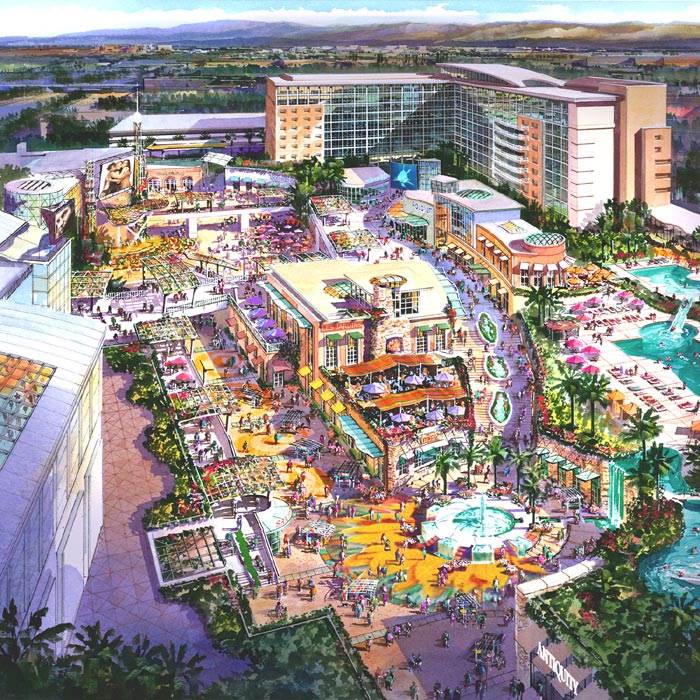 In 2002, demolition of a site near the Disneyland Resort commenced and construction began on a project that had already been stopped and started in the development phase over the previous 6 years for a new ambitious, $600-million project that promised four upscale hotels, an aquarium, shops and a slate of popular restaurants, all literally neighboring the Happiest Place on Earth and their new gate that had opened up only a year before. 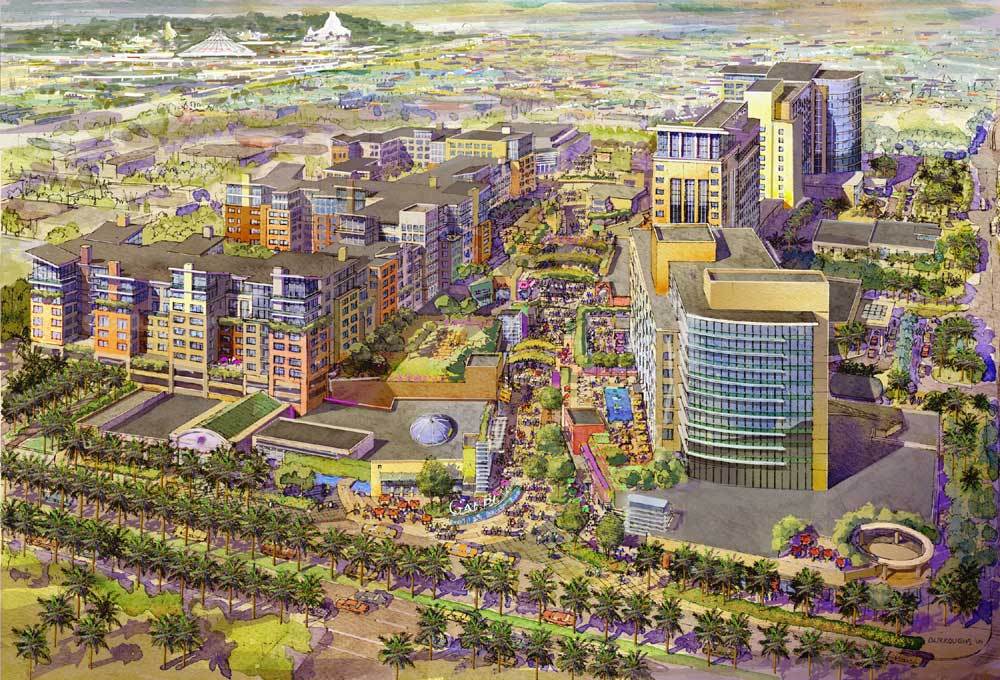 Once referred to as Pointe Anaheim (Central Florida locals, this might sound akin to Pointe Orlando), the new Anaheim GardenWalk was ready to begin. Then-Mayor Tom Daly said at the time, “The success of Downtown Disney has proved beyond any doubt that there is a strong market for shopping and restaurants with varied entertainment thrown in. We have wanted more upscale shopping and restaurants, and this project brings all that and more.”

While more legal battles and development challenges were peppered over the next few years, the project finally ramped up by 2005 with the open expanses between Katella Ave. and Freedman Way (now Disney Way) showing booming signs of activity and vertical construction. In 2008, Anaheim GardenWalk opened up, and the pedestrian thoroughfare/outdoor mall was welcoming visitors.

Fans of history may have already realized that 2008 might not have been the best time to open a retail, dining, and entertainment venue as that coincides with The Great Recession and all the trials and tribulations within. By 2011, GardenWalk had a low occupancy rate of 55%. While the streetside locations like Bubba Gump Shrimp Co. and the Cheesecake Factory were doing well (and are still there today), the locations in the more interior areas were not. Even big names like Forever 21, Hollister, and Ann Taylor LOFT were shuttered, leading (at the time) to empty stalls and storefronts, or even very temporary-looking fill-in retailers like cell phone repair or discount theme park ticket outlets. Also notably missing were those promised big name hotels and attractions like aquariums.

By 2017, and with a new set of owners, occupancy had increased to roughly 68% but the outdoor mall was once again on the market. However, one of those promised attached hotels was on the horizon as by the end of the year, a new 466-room JW Marriott would break ground at the site. 2017 also saw the addition of the House of Blues, a new tenant that had crossed Harbor Blvd. from their former location at Downtown Disney. Taking over a former movie theater location that closed in 2015. AMC Theaters also made the move from Downtown Disney to GardenWalk after that location was closed for a fourth Disney hotel that was never built, opening with six screens in their new home in 2019. 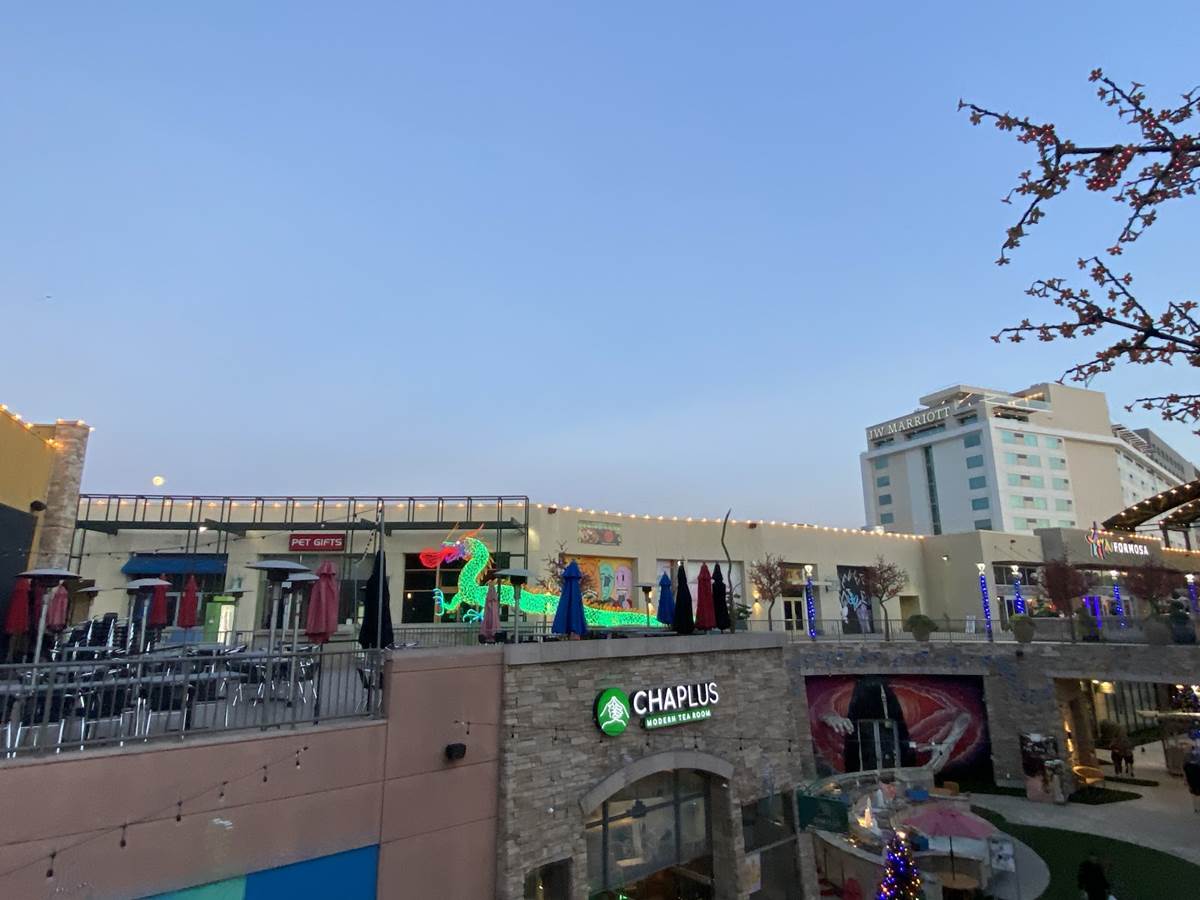 By 2019, GardenWalk was acquired by STC Management, based out of nearby Whittier, and had signed leases with restaurants and small business owners, bringing the occupancy level up to 90% with plans (at the time) to bring in Indian, Japanese, Taiwanese, and Boba Tea locations, as well as a board game cafe, a bar arcade, and a year-round haunt location. But most importantly, the new owners are bringing in more of a focus on entertainment than on retail, creating more foot traffic and more importantly, more life throughout the center.

With the Pandemic in 2020, the outdoor nature of GardenWalk helped many of the tenants survive, extending seating into outdoor areas when other eateries otherwise couldn’t due to California's subjectively stringent regulations at the time. Now, in late 2021, the GardenWalk seems more alive than I personally have ever seen it before, not just with shops but unfamiliar (a good thing) dining locations and entertainment offerings. There have also been plans to turn a large open area near the House of Blues into a beer garden with local drafts and a small dog park where guests can bring pets. Reportedly, GardenWalk will also play host to community events, like a farmers market, and upgraded artwork and murals and landscaping are taking over the outdoor mall, with some areas even designed for the perfect social media selfies to help spread the word. STC has even emphasized their plans to “bring the garden back to GardenWalk” with plans to create spaces for people of all ages and walks of life to enjoy and congregate whether it is to meet a friend or just escape the hustle and bustle of the surrounding city, as well as that aforementioned dog park. They even host “Art on the Walk,” a program to  support local artists. Murals, art installations, art in windows and more are showcased in a quarterly event for artists to sell their work. As we get ready to explore more of the revitalized center, let's start at that long-awaited hotel addition that was promised from the outset, and head to the new JW Marriott to go high into the sky above the decade-old yet somehow brand new GardenWalk.