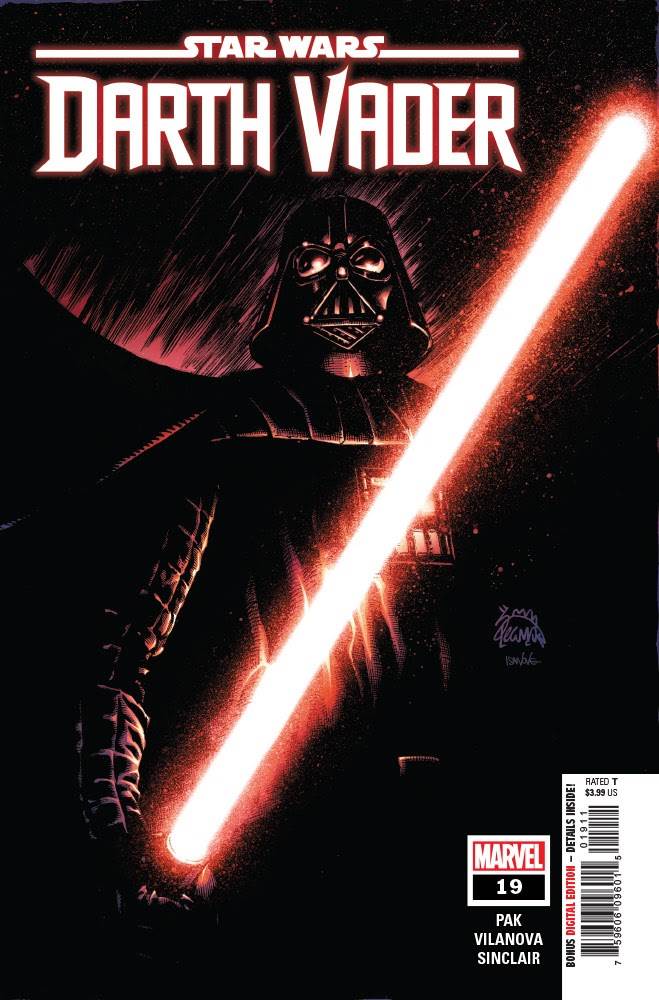 The Dark Lord of the Sith formerly known as Jedi Knight Anakin Skywalker continues his quest to weed out Crimson Dawn in Star Wars: Darth Vader volume 3, #19, out today from Marvel Comics.

Writer Greg Pak and artist Giui Vilanova open Darth Vader #19 with more red-tinged flashbacks to Anakin’s youth. We see the young Force-user saying farewell to his mother and conversing about politics later on with his eventual wife Padmé Amidala, in recreations of scenes straight out of the Star Wars prequel trilogy. 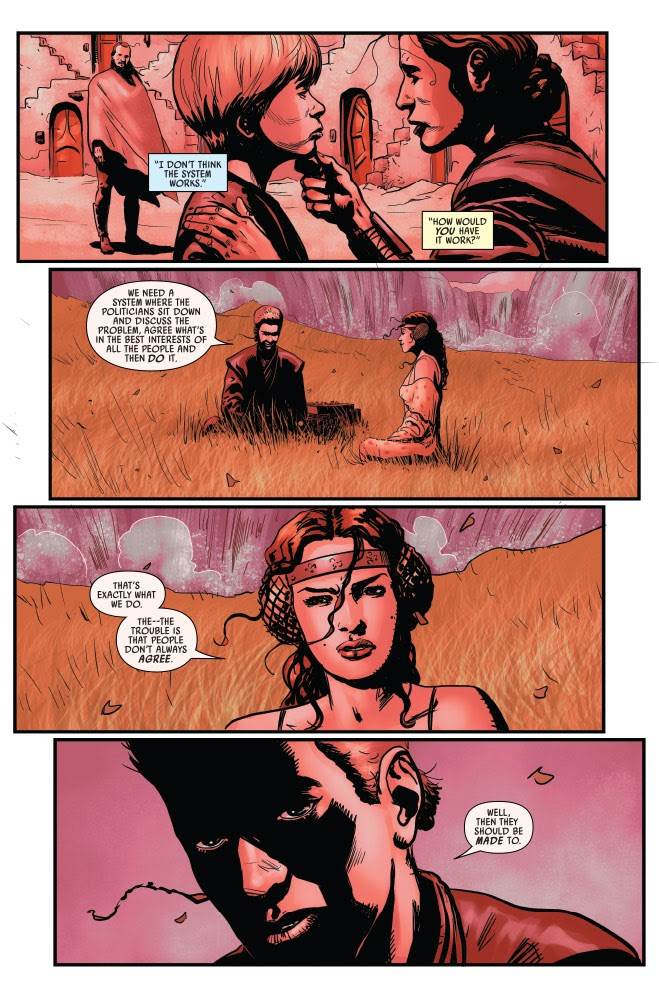 Then we smash cut to the “present” of this ongoing comic book (currently the period between the events of The Empire Strikes Back and Return of the Jedi), where Darth Vader and his new recruits– “revengers” who have been wronged by the Crimson Dawn crime syndicate in the past– have traveled to the Outer Rim planet of Laecor. There, they investigate a Crimson Dawn attack on civilians who were once loyal to a local Jedi protector. Naturally, after Vader takes out a squadron of double-agent stormtroopers, the residents of Laecor come to think of him as their new savior, but as former bounty hunter– and now Vader’s begrudging third-in-command– Beilert Valance warns his troops, the Dark Lord only serves the interests of the Galactic Empire. Meanwhile, Ochi of Bestoon continues to operate as Vader’s right-hand man, though shockingly the fearsome Sith has not yet figured out that Ochi is indeed also an agent of Crimson Dawn, as revealed near the end of this year’s Star Wars: War of the Bounty Hunters crossover event. 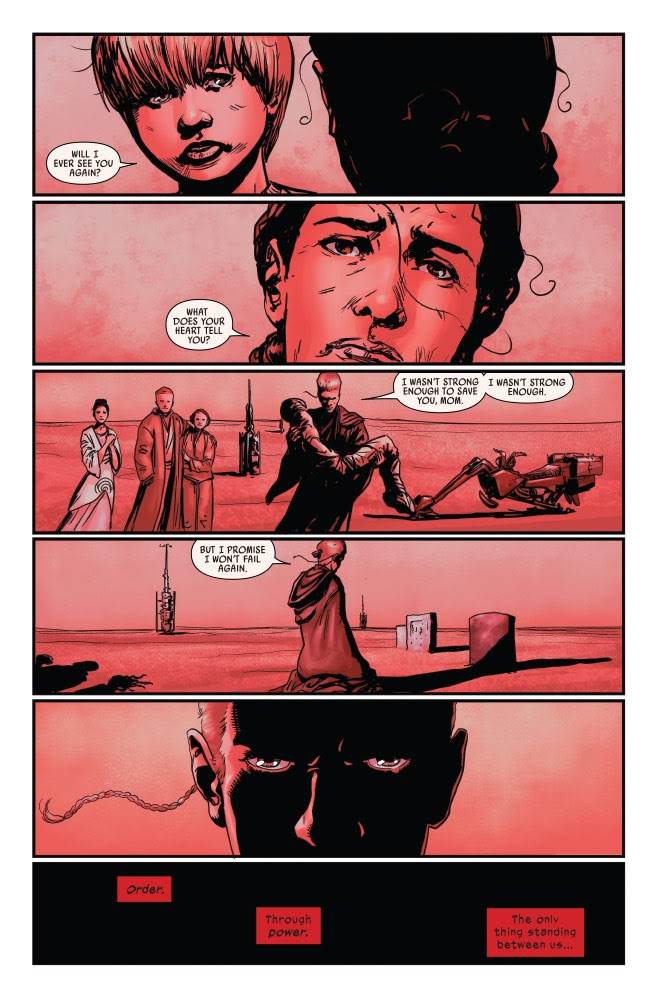 Vader, Ochi, Valance, and their team infiltrate a Crimson Dawn base on Laecor after battling their way through an onslaught of attacks from its inhabitants. Once inside, ol’ Darth declares that Crimson Dawn is merely the symptom, and that he intends to eliminate the root disease. And evidently, the Dawn’s incursion into the Imperial ranks reaches much higher on the bureaucratic totem pole than we might have assumed, as discovered by Vader and his companions in the base’s databanks. I really like how Pak has chosen to use Anakin’s dialogue from the prequels to inform Vader’s decisions during the Original Trilogy era, forging further connections that only serve to tie together the larger story better than before. Similarly, Vilanova’s art serves the tone of the narrative well, both in flashbacks and in the comic’s “current day” happenings. The ragtag team assembled by Vader and company is an interesting one, and I hope we get to spend more time with the Trandoshan heavy named Tanka (who reminds me a bit of Ben Grimm AKA the Thing from The Fantastic Four), the “tough, fast, and smart” Weequay called S’ira, and their human leader Ankala Sahm. I tend to be hesitant to embrace new characters right out of the box, but these guys seem like a lot of fun and I hope Pak gets to play around with them a bit more in upcoming issues. 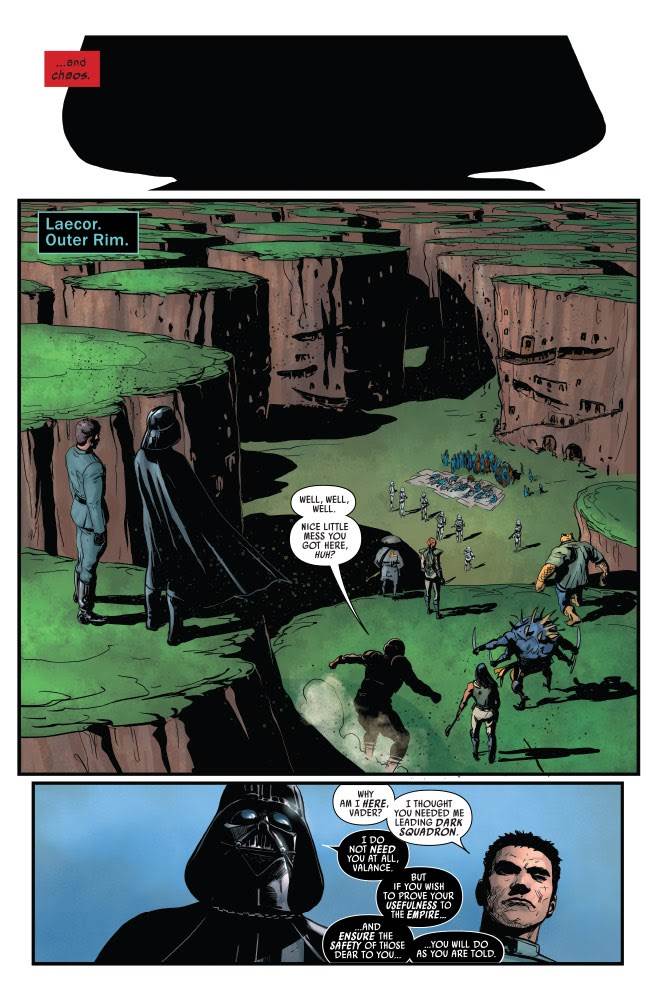