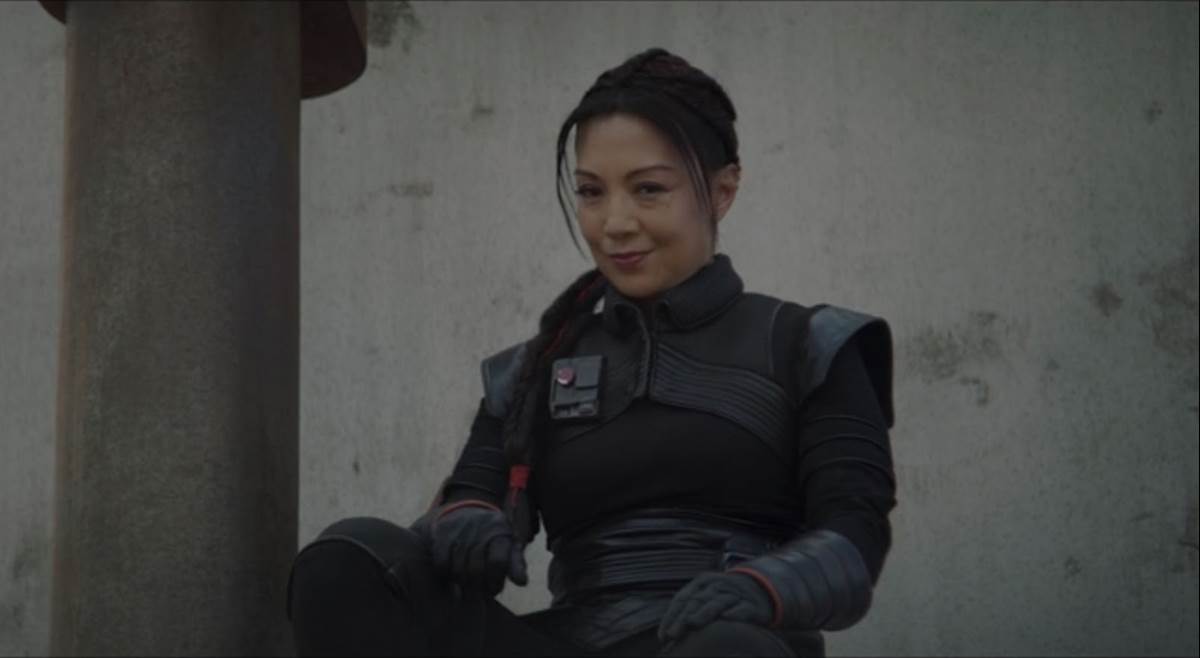 Last week’s episode of Star Wars: The Book of Boba Fett ended with a surprise musical tease that we might see bounty hunter Din Djarin, the lead character from The Mandalorian, pop up in this series as well. Little did we know that we’d get an entire episode dedicated to Pedro Pascal’s protagonist from the smash-hit Disney+ show.

The Book of Boba Fett’s fifth episode, entitled “Return of the Mandalorian” (just a little on the nose, don’t you think?) opens in a space butcher shop, where Djarin shows up to kick butt and take… the head of his latest target, but not until after fumbling with the Darksaber he acquired at the end of The Mandalorian’s second season.

Din trades in his bounty for information on where to find a Mandalorian covert and reconnect with his old friends the Armorer (Emily Swallow) and Paz Vizsla (Jon Favreau). There, Djarin trains in saber combat, learns more about the history of the planet Mandalore, and even has his Beskar spear reforged into a gift for young Grogu– I’m assuming some kind of chain-mail armor the kid can wear– who he plans to visit at Luke Skywalker’s Jedi Academy to “make sure he’s safe.” Then Vizsla challenges our hero to a duel in order to reclaim the Darksaber for his clan, and of course ends up losing, but Din gets kicked out of this private club anyway because he admits to having removed his helmet once or twice. From there he boards a transport to Tatooine and pays a visit to Peli Motto (Amy Sedaris), who offers him a replacement for the destroyed Razor Crest– a Naboo starfighter from the Galactic Republic days.

We then spend pretty much the entirety of the remainder of the episode watching Motto and Djarin tinker with this broken-down starfighter until they get it spaceworthy again, and as 50 minutes worth of low-stakes Star Wars content it’s absolutely delightful. Then Fennec Shand (Ming-Na Wen) shows up and enlists Din to fight alongside Boba Fett, and we’re reminded that this is all intended to tie in with a wholly different (and admittedly somewhat lesser) series. Djarin agrees to help– for no charge– but not until he checks in on the little green guy. Does that mean we’ll see Grogu in The Book of Boba Fett? I think it’s even money at this point, and it’s wonderful that Favreau as creator along with executive producer Dave Filoni are putting together an interconnected universe of their own nestled snugly within the larger, ever-expanding tapestry of the Star Wars galaxy. But I can’t help but feel like the return to Fett’s struggle against the forces of the Pyke Syndicate might feel like a bit of a step down from this incredibly strong, engrossing return to form.

Other than a handful of shorts, Bryce Dallas Howard has only helmed a few hours of live-action content, and I hate to say it but she already feels more accomplished and skilled at her craft than Robert Rodriguez, whose two Book of Boba Fett entries have felt rather flat and lifeless compared to this so much more compelling hour that by and large consists of people standing around talking. It further drives the point home that character matters a whole lot more than action (which Rodriguez isn’t as good as Howard at, either) and that the audience needs to feel connected to the people on screen before they can root for them in battle. I think “Return of the Mandalorian” probably isn’t what most people expected when they tuned into Star Wars: The Book of Boba Fett on Disney+ today, but it’s still easily the best episode the series has produced so far, and that feels wrong somehow, considering it’s basically an episode of The Mandalorian.

Two more episodes of Star Wars: The Book of Boba Fett will be released over the next two Wednesdays, exclusively on Disney+.