Chip ‘n’ Dale, the chipmunk brothers who famously tormented Donald Duck in many a classic short, stepped into the present in 1989 with the launch of the Disney Afternoon animated series Chip ‘n’ Dale Rescue Rangers. The series was an instant success, introducing a new generation of kids to the classic characters alongside new friends like Monterey Jack, Gadget Hackwrench, and Zipper. First announced as a Disney Movie Club exclusive, the complete series arrives on Blu-Ray for the first time in a wide release on February 15th. 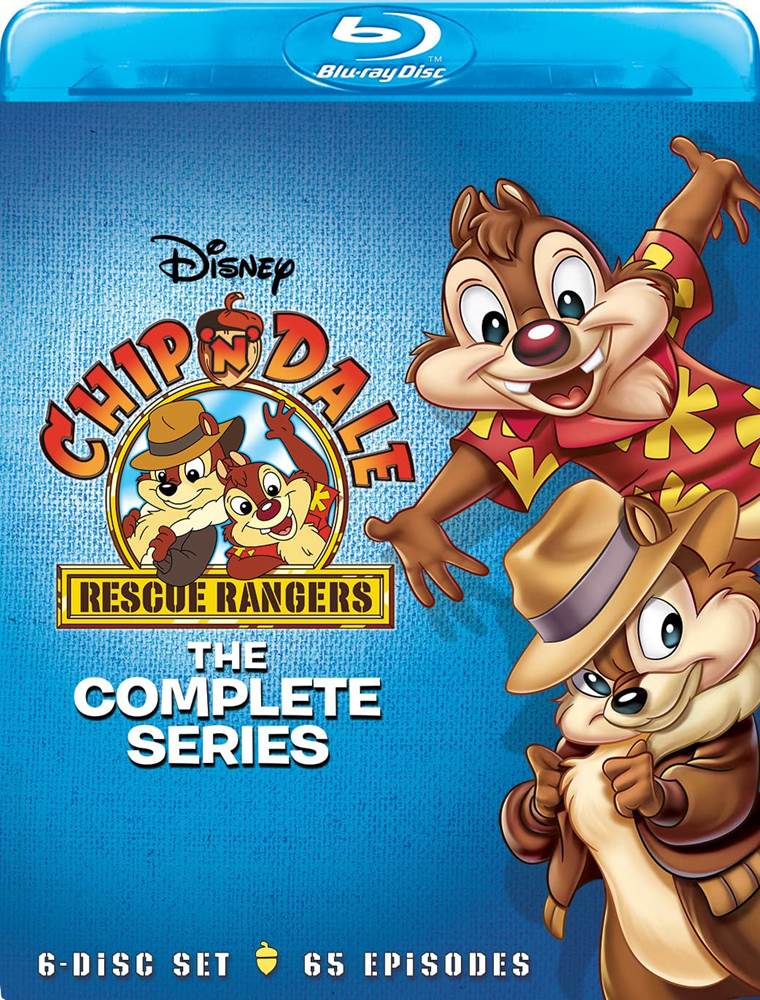 Inspired by then-popular projects like Indiana Jones and Magnum, P.I., Chip and Dale become gumshoe sleuths solving crimes alongside their new friends. Over the course of 65 episodes, including a 5-part origin story, they go on big adventures and face off against some recurring foes like Fat Cat, Professor Norton Nimnul, The Siamese Twin Gang, and Sewernose de Bergerac.

Two 3-disc DVD releases in the mid-2000s gave fans a little more than two-thirds of the season to own, but this Blu-Ray release marks the disc debut of 14 episodes, in addition to the first the entire series has been collected in one release. This includes an episode titled “Puffed Chips” which comes with a warning of outdated cultural depictions on Disney+. There’s no disclaimer on the disc, but the back of the packaging includes a similar warning that directs buyers to the website Disney.com/StoriesMatter with information about how to start a dialogue about race and stereotypes.

Nostalgia is the main impetus behind the release, with successful sales likely to yield similar high-definition box sets of other classic Disney Afternoon shows, including DuckTales, TaleSpin, Goof Troop, and more. It’s a promising sign that based on response to the Disney Movie Club release announcement, Disney quickly pivoted to a wide release (the same can not be said for the more recent series Rapunzel’s Tangled Adventures). A decision to purchase likely hinges on not only your fond memories of the series, but also whether or not the cropped presentation on Disney+ bothers you. On disc, the series retains it’s original fullscreen presentation, but there aren’t any bonus features to offer exclusive supplemental content. It also doesn’t include a digital copy code, which isn’t unusual for Disney, but has become the norm for TV releases from other studios.

The correct episode order of Chip ‘n’ Dale Rescue Rangers has been the subject of much debate since the first collection was released on DVD in 2005. Although the series was never completed on DVD, this release follows the episode order of the first two volumes and presumably how the episodes would’ve appeared on the third unreleased installment. There must be some rhyme or reason to this order since Buena Vista Home Entertainment keeps using it. It’s not in order of original airdate (Disney is known for airing children's programming out of order) and also doesn’t follow Bill Cotter’s production order, as published in The Wonderful World of Disney Television (this is the order Disney+ uses).

Does the episode order of Chip ‘n’ Dale Rescue Rangers matter? Not really, as each episode is a self-contained plot with no carryover. A few anomalies can exist, such as the appearance of a vehicle or character who is introduced in one that comes later, but they are few and may even be the result of scripts being written in a different order than they were animated.

Another note, the 5-part “Rescue Rangers to the Rescue,” originally presented as a TV movie, is presented here in its syndicated broken-up format, as it was on DVD and digital releases.

Chip ‘n’ Dale Rescue Rangers looks cleaner and brighter than my recollection of the original broadcast and DVD release. Digital Noise Reduction (DNR) appears to have been implemented in the restoration, but some scenes show the celluloid dust and scratches you expect from an animated TV show of this era. While it's sure to upset a few purists, the show looks better than it ever has and the DNR doesn’t feel overapplied like it does on some of Disney’s botched restorations, particularly Mickey’s Christmas Carol and The Sword in the Stone (the latter film has received an upgraded restoration on Disney+). This release also retains the original 4:3 TV aspect ratio of the era, unlike the zoomed-in Disney+ version to avoid pillar boxing. You’re getting the full intended animated image on this Blu-Ray release.

The Blu-Ray release only includes a stereo English soundtrack. The series was dubbed in many languages, which are available on the Disney+ version. An English subtitle option exists by pressing the subtitles button on your Blu-Ray remote control.

This 6-disc set comes in a Blu-Ray case that is slightly wider than the standard case, about the width of a standard DVD case. Two double-sided holders are hinged to the inner spine, with the remaining two discs on either side of the inner case. The artwork recycles clipart and promotional images used on the previous DVD releases. There isn’t any disc art and the only insert is a flier for Disney Movie Club (no Disney Movie Insiders code included).

Each disc uses the same menu, which repeats the character artwork from the front cover, but over the DVD cover’s green/white ombre background. Instrumental theme music from the end credits play over the static menu, which only features two options: “Play All” or a menu of episodes.

I never thought I’d see the day when Disney Afternoon content would get a complete series disc release, let alone in HD on Blu-Ray. Episode order confusion aside, Chip ‘n’ Dale Rescue Rangers has never looked better and with the original aspect ratio preserved, this disc release is the recommended way to enjoy the series, vs. the cropped streaming presentation. 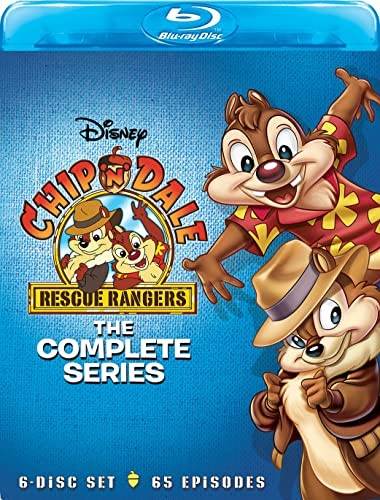