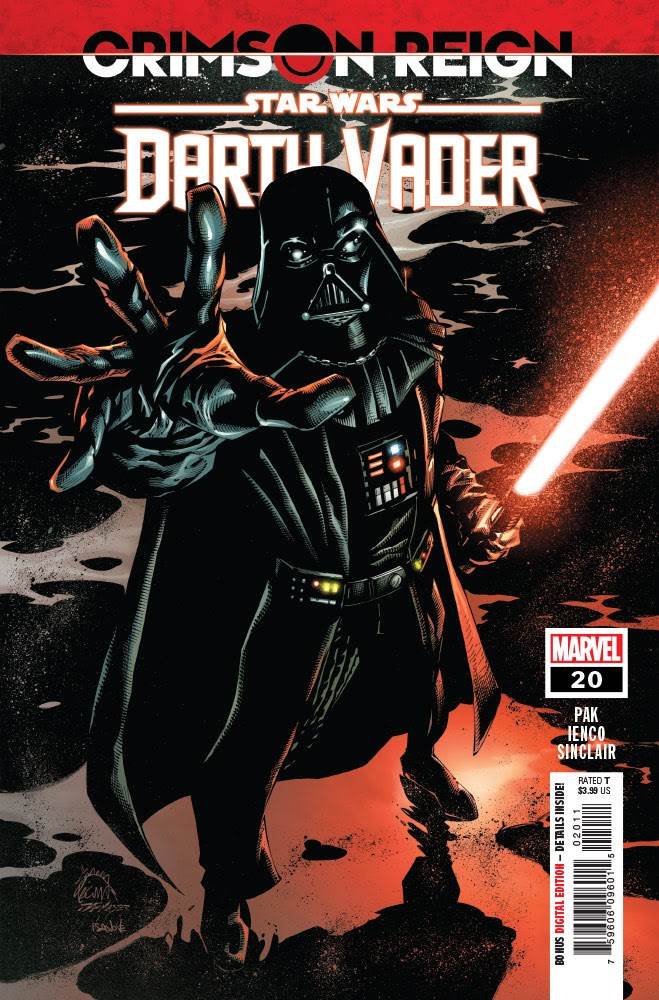 The Dark Lord of the Sith is doing his best to track down and eliminate all of Crimson Dawn’s Imperial infiltrators, but there’s a new player on the field who has begun to complicate things in Star Wars: Darth Vader, volume 3, issue #20, out today from Marvel Comics.

After Sabé the handmaiden had a featured role in the first arc of this run of Darth Vader comics written by Greg Pak, it seemed like she and the Sith Lord had gone their separate ways, with Sabé and her friends from Naboo left believing that Vader had murdered their former queen, Padmé Amidala (admittedly not too far from the truth, but still incorrect). 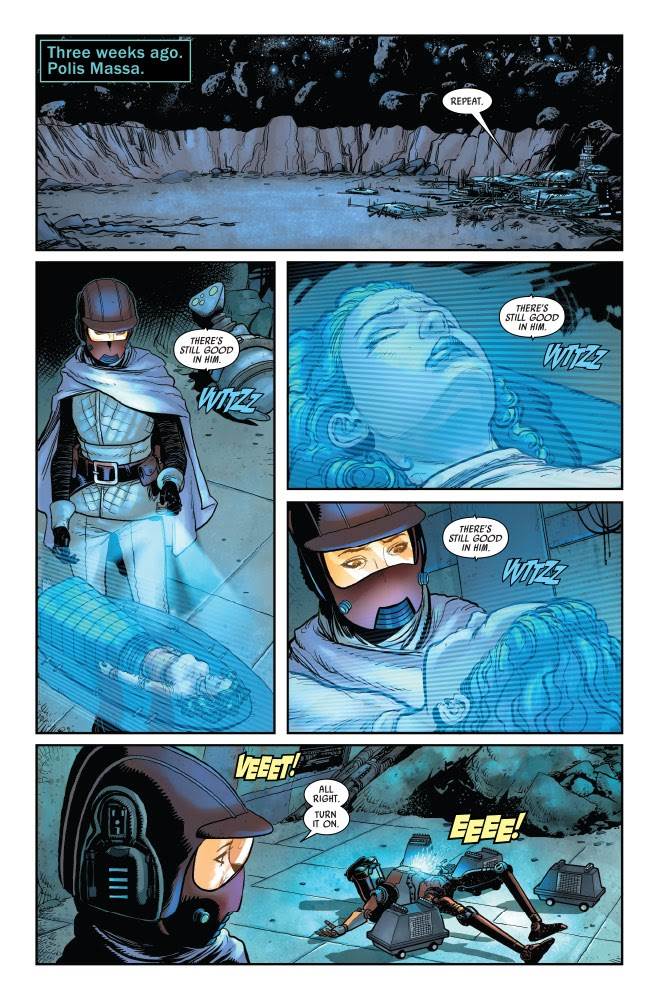 Now Sabé has made a discovery that brings her one step closer to understanding the reality of the situation: Padmé died in childbirth in the Polis Massa asteroid field, with the father of the male child (not to mention his twin sister, though that information remains hidden) being Jedi Knight Anakin Skywalker. Sabé plans to use this information against Vader, who appears to be hunting their offspring, Luke Skywalker, for reasons that she doesn’t quite grasp just yet… though they should be obvious to anyone who’s seen the Skywalker Saga of Star Wars movies. We also learn that Sabé is currently working with the criminal organization known as Crimson Dawn (this comic had to tie into Marvel’s current Star Wars crossover event Crimson Reign somehow) in an effort to get closer to the Dark Lord. She plants a half-fake list of Crimson Dawn collaborators where Vader and his team of lackeys can find it, and the targets start to get executed one by one. It’s pretty fun to watch the younger of the two Sith Lords storm into Emperor Palpatine’s office and start taking his lightsaber to advisors and guards, even though only some of them are aligned with Crimson Dawn. 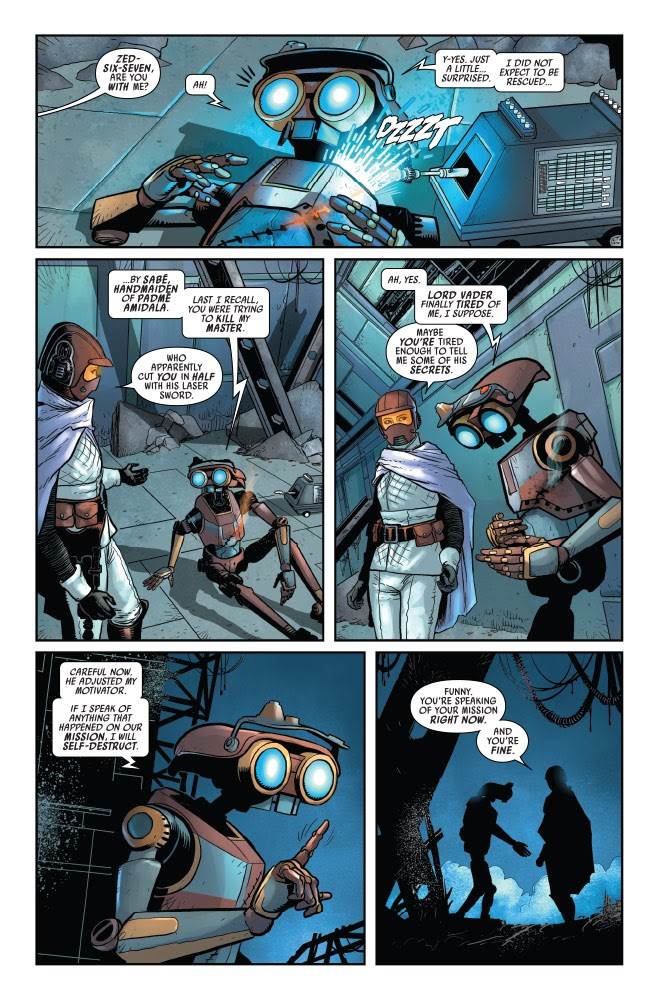 Aboard the Super Star Destroyer Executor, Vader’s assassins gun down officers and stormtroopers, while another squad breaks into the luxurious home of a Coruscant aristocrat to bump him off as well. Again, only 50% of these people turn out to be working for “the Dawn,” but that selfsame consortium is evidently behind the list of traitors, so they must have a reason for wanting this particular assortment of victims eliminated. Vader comes to the same conclusion, and orders Ochi of Bestoon to figure out the commonality shared by all the targets, not yet aware that Ochi himself is a Crimson Dawn sleeper agent. The last scene has Sabé holding Ochi and Administrator Moore at blasterpoint and giving them instructions to cooperate or be outed as spies. I think the pairing of Pak as writer and artist Raffaele Ienco have continued to do a wonderful job of making readers care about this group of supporting characters populating the subsection of the Star Wars universe around Darth Vader, and I’m very curious to find out how this all continues to affect the intriguing events of Crimson Reign. 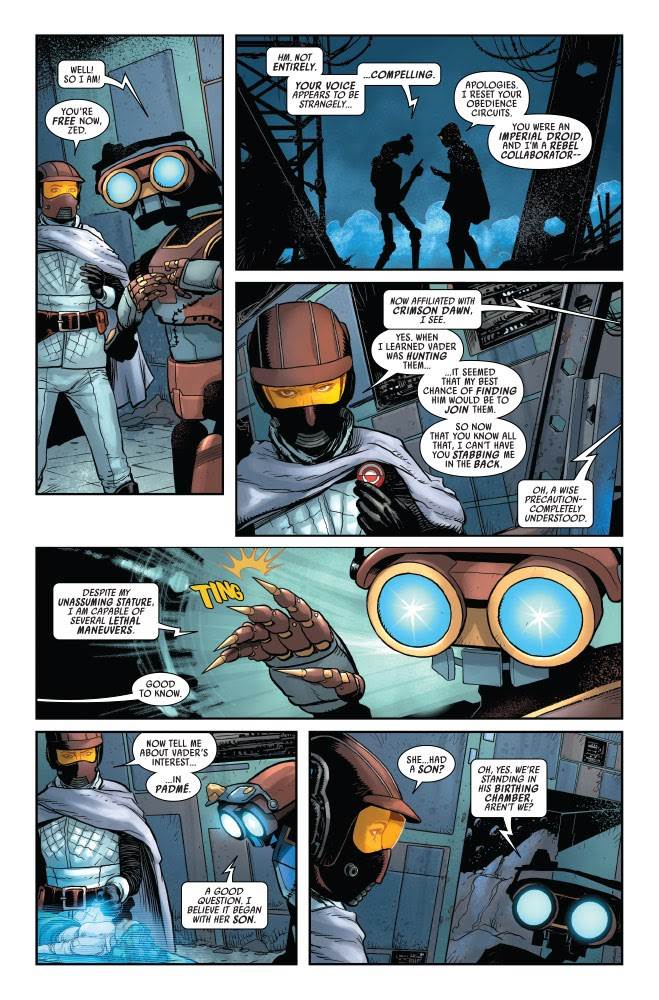