My first taste of immersive theater as an art form came from a show called Accomplice in New York City, which had me and a few friends running around lower Manhattan (within a larger group of strangers who were also participating) interacting with eccentric characters in an effort to solve a seedy underworld mystery. Later on my friend and former boss Ricky Brigante exposed me to the Los Angeles immersive haunt scene via his podcast “Outside the Magic”– and I soon called unforgettable shows like Delusion and Wicked Lit some of my favorite Halloween-time experiences in Southern California. And now my all-time favorite pop-culture franchise is diving headfirst into the immersive medium thanks to Walt Disney World’s groundbreaking, first-of-its-kind resort experience Star Wars: Galactic Starcruiser. This week I had the fortunate opportunity to take in an abbreviated tour and “fast-forward highlight reel” (so called by accomplished Walt Disney Imagineer Scott Trowbridge, the lead creative mind behind Galactic Starcruiser and its sister theme park land Star Wars: Galaxy’s Edge) of the immersive experience, approaching it with cautious optimism and walking away extremely excited to get the full two-night adventure when I return to cover Star Wars: Galactic Starcruiser in its entirety for Laughing Place next month.

Arriving at Star Wars: Galactic Starcruiser’s unassuming show building, nestled next to the Disney’s Hollywood Studios theme park (home of Galaxy’s Edge on the east coast, naturally) one might not assume that anything special resides within the utilitarian-looking walls of its terminal. But after being shot up into space via a “Launch Pod” (really an elevator that doubles as a mini-simulator) and entering the starcruiser Halcyon’s atrium, I started to genuinely get shivers up my spine when it finally sunk in that I had stepped into an almost-seamless real-life version of the Star Wars galaxy– complete with colorful alien characters, chirping droids, and the everpresent aroma of danger around every corner.

A fair amount of criticism has been leveled at the Walt Disney Company for its marketing strategy in promotion of Star Wars: Galactic Starcruiser, but after having visited the Halcyon myself, I have to admit that it strikes me as an incredibly difficult thing to describe or even advertise to anyone who hasn’t experienced something like this for themself. The closest comparison I can make in the theme-park universe is Knott’s Berry Farm’s “Ghost Town Alive!” (not to mention its Disneyland forebear “Legends of Frontierland”), where guests can interact with wild-west outlaws and lawmen as a story plays out over a full operating day. At Galactic Starcruiser, however, guests are obviously visiting A Galaxy Far, Far Away rather than the Western mining town of Calico, California– so the characters you’ll encounter here fit right at home in the George Lucas-created universe. And as much as I adore “Ghost Town Alive!”, it doesn’t come anywhere close to this in terms of scale, length, ambition, and… let’s face it, four and a half decades worth of brand recognition.

In fact, I’d go so far as to say that I enjoyed meeting and getting to know the original characters created for Star Wars: Galactic Starcruiser more than I did seeing familiar faces like Rey, Kylo Ren, or Chewbacca– sometimes those characters don’t look quite enough like their big-screen counterparts (Why can’t Disney Parks seem to get ahold of a convincing Chewie costume?). But I found new personalities like the Twi’lek pop-singer Gaya– who brings down the house during her performance in the Crown of Corellia dining room– and a plucky mechanic named Sammie to be instantly memorable, to the point where I could definitely see them branching out into other areas of the ever-expanding tapestry that is the Star Wars storytelling galaxy.

Unfortunately our limited four-hour visit to the Halcyon did not include the excursion to Batuu or a sleepover on the ship itself, but we did get a glimpse of the guest cabins and a chance to meet logistics droid D3-O9, who acts as a sort of omnipresent artificial intelligence (activated by the touch of a button), of whom passengers can ask any number of questions, such as what’s next on their itineraries or where to find certain onboard locations.

Should you visit the Galactic Starcruiser, you’ll frequently find yourself pulled aside by members of the First Order– or sympathizers of the Resistance, depending on which faction you find yourself allied with– to complete a series of tasks like disabling the Halcyon’s engines or helping Chewbacca escape before he gets captured. You’ll even participate in a couple in-depth “bridge training” exercises that gradually evolve into expanded story moments along the way.

Speaking of story moments, you’ll want to keep an eye and an ear out for major events happening around the ship, often in the atrium but occasionally elsewhere as well, that advance the overarching plot forward.

One of the most heavily featured aspects of Galactic Starcruiser’s marketing has been the lightsaber training pod, which turned out to be more fun than I had anticipated based on footage that Disney had released, but as an activity it did wear out its welcome by the end, especially considering how sweaty the training made me. I will say that the more tactile, hands-on undertakings like this will likely be more readily enjoyed by “younglings,” while adult Star Wars fans like myself will probably get a bigger kick out of the story and characters than the repetitive flipping of switches and blocking of laser beams.

One of the big questions that came up when Galactic Starcruiser’s concept was first revealed was how guests might relieve themselves of any claustrophobia that might be induced by remaining inside a windowless building for such a long period of time. And that problem has been solved by the “climate simulator”– an outdoor space that is ostensibly on the Halcyon, but intended to replicate the climate of Batuu, its ultimate destination.

I’ve already said this to a few people who have asked what I thought of this experience as a whole, but I would say there were at least half a dozen moments that nearly brought me to tears as a big fan of both Star Wars and immersive theater, and a couple of those moments came from a roomful of people with similar passions working together to solve problems– such as fighting off a First Order TIE fighter attack with the help of the Millennium Falcon.

Another such moment was seeing the Crown of Corellia dining room electrified by Gaya’s performance, which includes songs that are sure to become staples of the Star Wars fan community… and even a dance that passengers might be encouraged to learn for themselves during the concert.

But the biggest thrills of Galactic Starcruiser probably came during its fairly breathtaking, nearly 20-minute finale, which features (SPOILER ALERT) what may possibly be the only canonical crossing of paths between Rey and Kylo Ren between the events of Star Wars Episodes VIII and IX– according to Lucasfilm Story Group member Matt Martin, that is. As anyone who’s seen the sequel trilogy knows, sparks are sure to fly when those two go at it, lightsabers drawn.

Like I said above, this taste of Star Wars: Galactic Starcruiser has me chomping at the bit to go through the full experience when I return to Walt Disney World in just a few weeks. I won’t feel comfortable giving the attraction a formal review until then, but I will say that it sure feels like the combined talents of Walt Disney Imagineering and Lucasfilm have put together something incredibly impressive here. And while I’m definitely aware that the cost of admission is a big hurdle to overcome, I’m both confident and hopeful that Galactic Starcruiser will build a fanbase of supporters via positive word of mouth. It has more than enough going on to send visitors home with smiles on their faces… and maybe even the desire for a return trip. 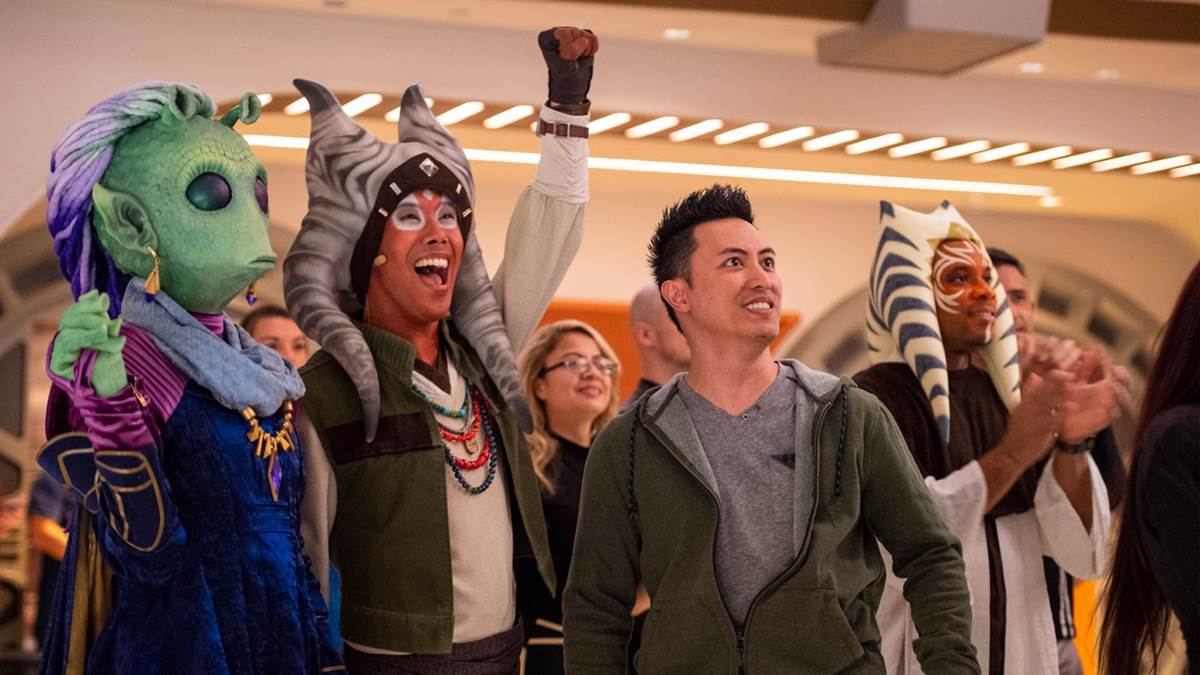