Big City Greens takes a look at the principals of barefooted children and parking garages, but also a thrilling adventure all for the sake of a surprise party in this week’s episode. 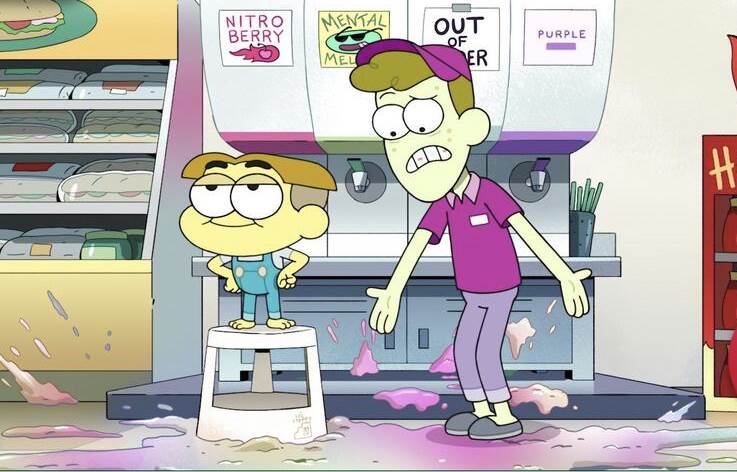 It’s free Splishy day at the Sip and Snak in Big City and Cricket and Tilly can’t wait to get their hands on their favorite chemical syrup mixed with ice. The two kids jump out of the truck and Bill and Gramma set to head onto the B Storyline, and try to find a parking spot while the two kids get their drink.

The two run into the store and right to the Splishy machine before getting stopped in their tracks. Tilly is more than welcome to enjoy her free drink, but Cricket is in clear violation of the “No Shoes No Shirt No Service” policy. Despite his pleas, Cricket is denied. Even Tilly offers to share hers, but the attendant, Clark, quickly says that that is also a clear violation of the rules and sharing can result in the forfeiture of her beverage.

While Cricket tries to find a loophole in all of the Sip and Snak official rules, Bill and Gramma are circling the city looking for a parking spot and refuse to pay the $5.00 for a space in the nearby garage. Their hunt for the free space continues when they pass the same garage and realize the price is beginning to increase based on demand.

Cricket’s loophole attempts didn’t work out so well, but he has also realized folks nearby can’t get their free Splishy because they too have neither a shirt nor shoes and can’t go in the store. The group all works together and begins protesting the rules. Clark just stands in the doorway knowing that they will soon break as the midday sun begins to rise and the temperature increases. Break they do when it gets too hot, everyone is willing to go into the store and by Sip and Snak compliant footwear and tops to get their hands on the free icy drink. Cricket too is broken and borrows Tilly’s shoes to go inside. Clark has promised that there is enough Splishy for him too as long as he follows the rules. As Cricket begins to pour, he sees his reflection in the tanks of the drink and realizes how sad he is to give up his principles.

A musical interlude begins and Cricket sings about his shoeless Splishy plight, intermixed with Bill’s eventual need to pay for parking as the price at the garage continues to increase. At the height of the song, we see Cricket throw off his shoes and smash his Splishy into the ground, spilling the last of it everywhere. Cricket is banned from the store (though with Clark’s respect) and Bill spends $50.00 for a parking spot, only to have the kids jump in the car, now ready to leave.

This episode is a fun little romp based on Cricket’s notoriously barefoot character and a common convenience store rule. What I’m afraid of (based on the principals and group banding together mentality) is that it will somehow become a piece of COVID-19 mask/vaccine propaganda. Let’s just keep it to the simple and fun story that it is.

Cricket and Remy are planning the Bodyguard-aversary of Remy and Vasquez but they need Bill’s help. Bill, who cannot lie, must distract Vasquez while Cricket and Remy finish setting up the party and gather supplies around town.

Bill is showing Vasquez how to whittle, telling him about his past as “Whittle Caesar” when Vasquez realizes that the boys are being suspiciously quiet. They go into their bedroom and realize they are gone and Remy’s smart watch has been left behind, so Vasquez cannot track them. In a panic, Vasquez thinks the kids have been taken by his nemesis, ViperFang, and under the guidance given to him, Bill just rolls with it and agrees. The two board Vasquez’s chopper and fly out of Big City and towards the island headquarters of ViperFang. When there, Vasquez takes care of all of the enemies, but realizes Bill has been making phone calls and thinks he’s in on the kidnapping scheme. Again, just rolling with it, Bill says that he’s busted and he’s actually the agent, MooseFang, and suggests heading back to Big City. Instead, Vasquez decides to lock Bill in ViperFang’s dungeon.

Back in Big City, Cricket is dealing with the bride-zilla-esque Remy who is demanding that every detail in the party be just right, getting sent into a spiral when they’re not. I mean, I agree, a place called “Balloons for Everything” should in fact, have balloons for EVERYTHING.

After words of encouragement from a phone call with Cricket, Bill realizes he can get out of the dungeon with his whittling skills and escapes to find Vasquez in a showdown with ViperFang. Bill tries to save him with the chopper but has to regain his trust. Instead, he just opts to grab him from the fight and together, they return to Big City and come crashing (literally) right into the party. Vasquez is ready to “end” Bill when all the lights turn on and party guests yell “Surprise!” Vasquez runs to Remy, thankful that he is okay, and apologizes to Bill for everything during the ordeal, ready to trust him again.

This episode of Big City Greens is now available on Disney Channel and the DisneyNOW app. Previous seasons can be found on Disney+.