This week’s The Ghost and Molly McGee takes us into the ghost realm for a decent amount of time, reminding us the stakes of Scratch and Molly’s relationship, and also takes us on an adventure with Patty, one of the residents of Brighton and her lost love. 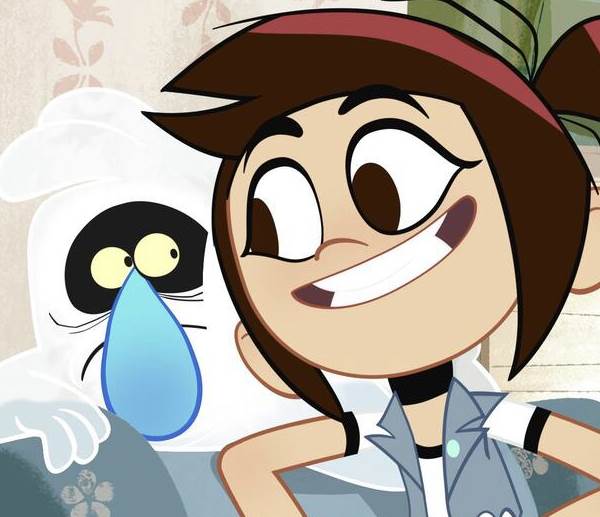 Scratch is up too early because he has to go to a scaring seminar, explaining to Molly that she would be without him for the day and taking us for an adventure (loose term) in the ghost realm.

The seminar is mandatory experience that is boring but Scratch wants to blow off the meeting with Geoff since it's the same every year.

Molly is at home with nothing else to do so she ends up going through a checklist for an alone day, which includes stacking and reorganizing her plush toys, which also end up being a way to teach scaring in the ghost realm.

Geoff and Scratch have made dummies of themselves so they can bail on the class and head out of the seminar for some adventure while Molly takes on a massive spider that is loose in her room.

Together, Geoff and Scratch head to the ghost spa for a massage instead of being in the class, as well as a stop at the Haughty Haunts night club, where the brief musical number of the episode, “Playing Hookie” begins to play.

The spider that Molly is battling is Daryl’s pet, and it turns out she's pregnant, ready to lay hundreds if not thousands of eggs.

In the ghost realm, Scratch and Geoff make it back to the class just in time for the head count, but this time they’re doing it differently. Now, they’re going to practice what they learned in the seminar for the ghostly chairman. Of course, neither Geoff nor Scratch know anything that was just taught in the class.

One of the ghosts fails the tests and gets sent immediately to the flow of failed phantoms, which is eternal punishment in the ghost world, and actually has been mentioned throughout the series as the one place that Scratch cannot be.

Scratch is asked to do a scare that he is unaware of, and fails. Just as he’s about to get sent in, Geoff steps in and says that they can’t send him in, he has a whole new method of scaring humans. The Chairman and the instructor are curious about the method and open the portal to view the results of his new scaring program.

Fortunately, they see Molly, petrified of the spider on the loose and decide whatever he’s doing is working and let him be on his way. Scratch, though dead, lives to see another day and heads back to Molly, but now he is equally as scared since the house is now covered in thousands of baby spiders.

Patty is reminiscing with Molly about the adventures in her life with her best friend Linda. She has a simple motto, “No Regerts” which is a typo she is aware of, but chose to live with it anyway. However, she does have one “regert,” and he goes by the name Bobby Daniels.

Cue the doo wop musical number about the Bad Boy of Brighton, Bobby Daniels. In it, we learn that Patty was going to leave and travel the world with Bobby, but he left without her.

Of course, Molly sees this as a mission and she and Scratch set out to find Bobby Daniels. Thanks to the wonders of the Internet, They find out that not only is he in a town nearby, he seems to check-in a lot at the library there. They investigate and find him working at the library and ask what happened with him and Patty, clearly still infatuated with her. They set out to bring him back to Brighton and reunite with Patty but during a reprise of the song, we realize it's more difficult than it seems.

Molly think it’s hopeless and heads back to Brighton and joins Patty and Linda where there a playing checkers. Bobby shows up responding to a letter that Bobby realizes all too late is actually a prank.

As Bobby and Patty are about to reconvene, Patty starts to yell at Bobby for leaving her so many years ago. He got a letter from her saying that she regrets to inform him she will not be leaving with him.

But the letter says “Regret” not “Regert!” It clearly was not a letter from Patty! As they discover this, a mysterious stranger arrives on a scooter and grabs Bobby, taking him away yet again. Patty won’t stand for it and jumps on her scooter to chase him. They finally catch up thanks to a little help from Scratch and discover that the mysterious stranger was Linda!

She sent Bobby the note because she was going to take her best friend away from her and leave her alone in Brighton. She wasn’t ready to lose her as a friend, but Patty said that they will have words later as she left with Bobby. Molly, astonished by the turn of events, tells Scratch to never interfere with her romantic life before rushing off to help Bobby and Patty and their dead battery-scooter.

I love when The Ghost and Molly McGee reminds us of the stakes introduced early on in the series, even though it was for a silly little adventure like today’s skipping class one, and I especially love when the series shows us more about the other residents in the town of Brighton and their stories, building out the world of the show. All in all, this is a solid entry in the series, and it keeps me wanting more.

This episode of The Ghost and Molly McGee is available now on Disney Channel and the DisneyNOW app. You can catch up with previous episodes on Disney+.