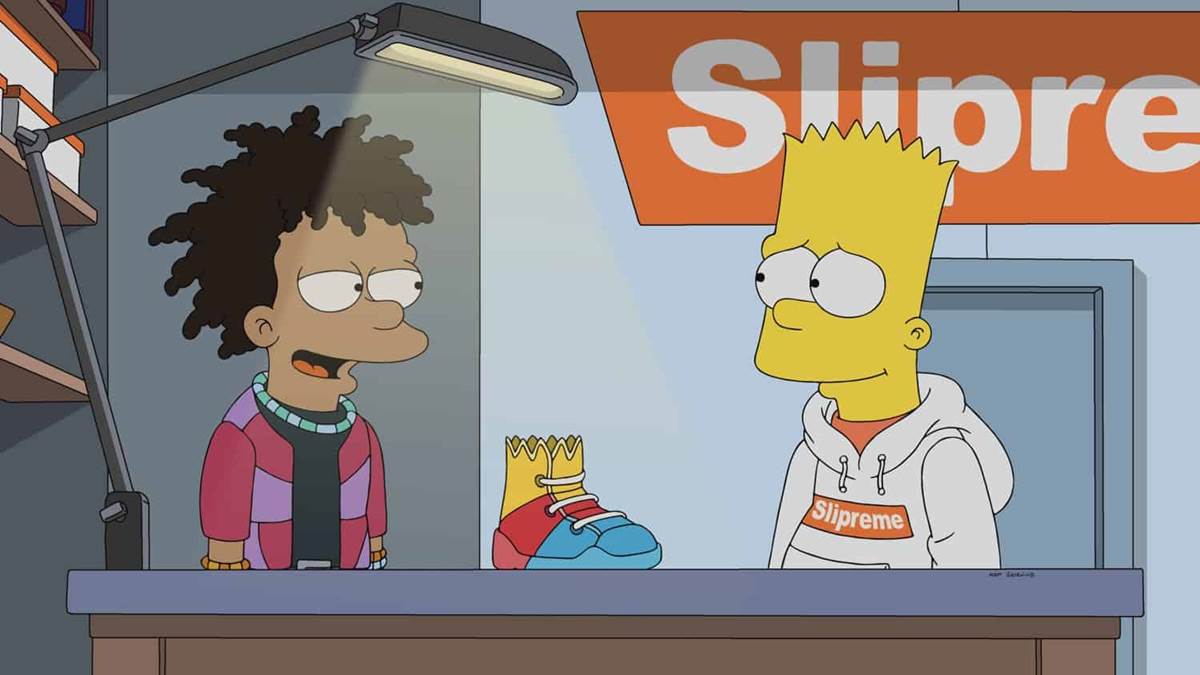 Hello and welcome to Laughing Place’s regular recap of new episodes of The Simpsons on the FOX Network. This week’s installment, entitled “Bart the Cool Kid,” is the 15th episode of the long-running animated sitcom’s 33rd season. “Bart the Cool Kid” begins with Bart arriving at Springfield Elementary School to see all the kids astonished by Ralph Wiggum’s new sneakers. “Those aren’t just sneakers. They’re Slipremes,” explains Milhouse, who further expounds that the shoes are endorsed by a popular TikTok star named Orion Hughes (guest star The Weeknd). At the Simpson home, Bart begs his parents to buy him a pair of Slipremes. “I’ve never wanted an article of clothing so bad in my entire life.” Homer agrees to get the shoes, so he takes Lisa to Springfield’s hip new shopping district, but they get stuck in line behind hundreds of hipsters to get into a store owned by Orion. The next morning, Homer wakes up Bart and gives him the shoes, having camped out overnight to get them. “Bought love is the best kind of love,” Homer says when Bart hugs him and says, “I love you.”

At school, Bart gets gasps from the other kids as he skateboards out in his Slipremes, but the sneakers quickly fall apart. Then at the Springfield Nuclear Power Plant, Homer receives a text from Bart telling him that he’s going to try to return the shoes because they fell apart. Then we see Homer’s flashback to “what really happened”: he met a slippery fellow named Mike Wegman (Michael Rappaport) who gave him a box of fake Slipremes and says Bart will never know. “I do like getting away with things,” says Homer, but in the present, Homer says he needs to stop Bart from returning the sneakers. We see Bart recording his attempt to return the shoes, but everyone in the store mocks him on their own phone cameras. Then Homer runs in and tells him it’s all a dream, but it’s not, and when Bart attempts to run away he tears his pants off and ends up in his underpants, causing everyone to mock him even more. In his room, Bart grumbles that Homer turned him into a Gif. Lisa enters and makes fun of a song that was written about Bart called “Pants Kid Shimmy.” Bart berates Homer and says he’s the least cool person that ever existed. Suddenly Orion Hughes rings the front doorbell and apologizes to Bart for the way his store’s employees shamed him. He delivers free Slimpreme skatewear as an apology, but when Bart wants to skateboard with him, Orion reveals he doesn’t actually know how to skate. Bart tries to teach his new friend how to skate, but Orion falls down when he hits a manhole cover, cutting his elbows open. He loves seeing his own blood for the first time, and encourages Bart to help him more. Homer, Marge, and Lisa have trouble eating hard-shelled tacos, so Homer decides to go to Moe’s wearing a Slipreme hoodie, and Mike Wegman posts a photo of him on social media, instantly making him cool.

“Finally I know how it feels to be stylish,” says Homer, realizing why people own more than one outfit. At the skatepark, Orion says he’s never hung out with a regular kid before. “I guess I envy you.” He offers to design a new sneaker with Bart and promises to make too few for all of his friends to be able to get them, an idea which of course Bart loves. At Moe’s the barflies are astonished by Homer’s new sense of style, so he brings in the crate of Slipreme outfits and gives the clothes to Lenny, Carl, Barney, and More. The makeover is so successful that Homer delivers more of the clothes to his other middle-ages friends around town. Meanwhile, Bart and Orion work on their sneaker design together– “The Bartman One.” They plan a party to reveal the sneaker, but then Principal Skinner enters Orion’s store and wants to buy a hoodie, making the celebrity come to the realization that his clothes have become uncool. “This is a nightmare. My brand’s been discovered by dads,” says Orion, who explains how the same thing happened to Ed Hardy when newly divorced dads wanted to look cooler on their dating profiles. Bart and Orion try to convince themselves that they’re still cool until Kirk Van Houten tells them that Homer is the reason adults have started wearing their clothes. “Stop dressing your zombie friends up in the clothes of the living,” Bart yells at Homer after he gets back home. Homer says it’s too bad, because he and his friends are all going to Bart’s sneaker release party. At the party, Orion breaks down in tears when he hears the news. Orion’s famous father shows up, and Orion has a breakdown, so Bart calls Marge for help. “If any young person asks you what you do, say virtual marketing for a CBD startup,” instructs Homer before he and his friends enter the party.

Marge shows up and tries to convince Homer that he’s not behaving like himself anymore, and when he looks at his reflection in a store window he realizes he looks ridiculous, so he persuades his friends to attend the Museum of Aviation History instead of Orion and Bart’s party. “I have no business wearing skatewear,” Homer tells Bart. “I don’t even like to ice skate.” Outside the party, Mike sells counterfeit Bartman sneakers, which Bart proudly dons before he and Homer go together to get chicken sandwiches. In the coda, Orion admits to his father that the party was “almost not a cultural game-changer.” And his dad reveals that Orion is actually a clone of himself created on the set of a movie about clones, that was filmed in a real cloning lab. “I love you, me.” “I love you too, me.” I don’t know.