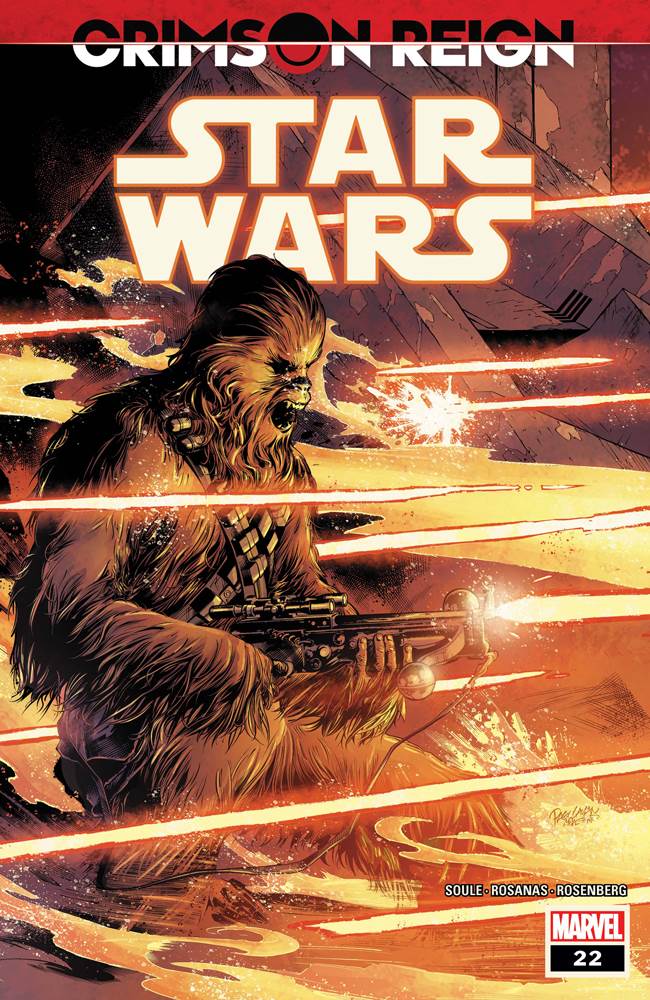 Just four issues ago in Marvel’s main Star Wars comic book title, Princess Leia Organa and Han Solo’s ex-girlfriend (not to mention current leader of the Crimson Dawn crime syndicate) Qi’ra met face-to-face for the first time. Now, in Star Wars #22, Qi’ra shows up aboard the rebel flagship Home One to strike a deal with the Alliance leader.

She gives Leia the location of both Commander Zahra’s star destroyer Tarkin’s Will and the final unaccounted-for rebel fleet division– killing two Porgs with one stone– in exchange for the rebellion’s trust and credits so that Crimson Dawn can become their supplier for food and fuel. 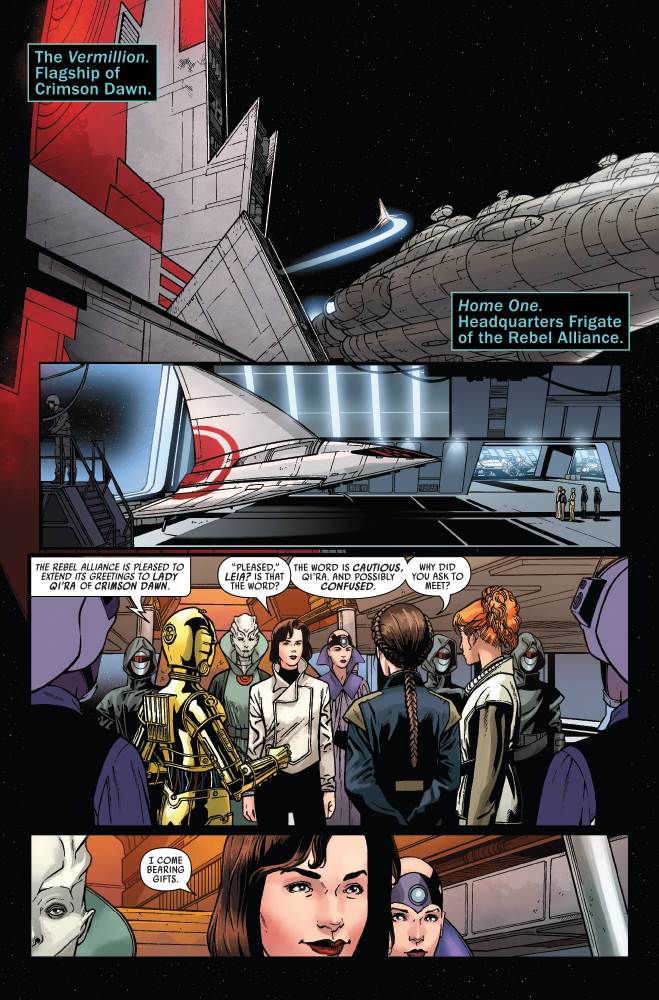 Meanwhile, Chewbacca is training for his own planned infiltration into Jabba’s Palace to retrieve the carbonite block containing his best friend Han (in a room that at first looks like the Star Wars version of a holodeck until Leia explains it’s all in chewie’s mind) and Kes Dameron has launched an unauthorized rescue mission to bring back his wife Shara Bey. We also spend some time with Zahra as she tortures Bey for information– until she gets interrupted by Starlight Squadron’s sneak attack, that is– and this issue features an expanded role for a young Amilyn Holdo, the character played by Laura Dern in Rian Johnson’s Star Wars: The Last Jedi. There’s a lot going on here, but as usual writer Charles Soule makes it all work, especially in recreating the tension of the uneasy alliance between Leia and Qi’ra that we first saw in #18. I thought for sure it would be tough to top that issue, but Soule and top-notch illustrator Ramon Rosanas sure are making a go of it as the “Crimson Reign” storyline continues. 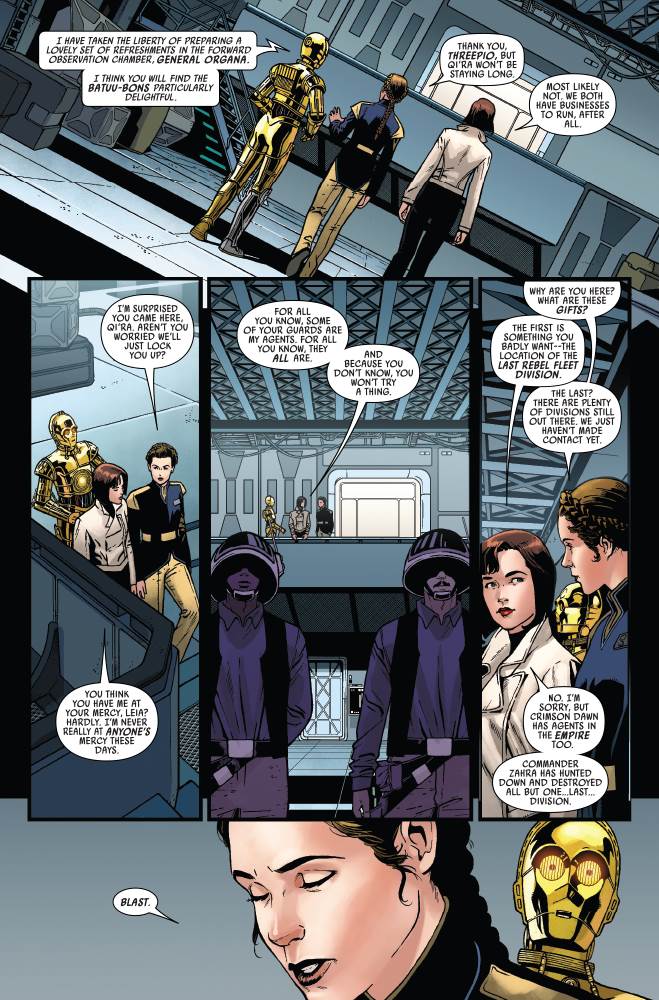 The above-mentioned faux-holodeck sequence is the most jarring two-page spread in this installment, with head-scratching moments like Chewbacca gunning down Boba Fett while fellow bounty hunter Aurra Sing (who we know died at the hands of Tobias Beckett much earlier in the timeline) watches from the background. And though this is quickly revealed to be a mindscreen, it still feels like a bit of a cheat to put this sequence on the cover– and not something we often see in Star Wars content outside of Force visions. That’s a minor complaint, however, and every other subplot in this comic clicked pretty well for me. Zahra’s threatening of baby Poe Dameron’s life came across as especially devious, cementing her as a deliciously unscrupulous antagonist, and the Tarkin’s Will jumping into hyperspace with Kes and his extraction team (including a bearded rebel trooper who looks remarkably like the notorious Nik Sant) aboard– only to arrive at the same coordinates as the entire Rebel Alliance fleet– makes for a wonderfully tantalizing cliffhanger. 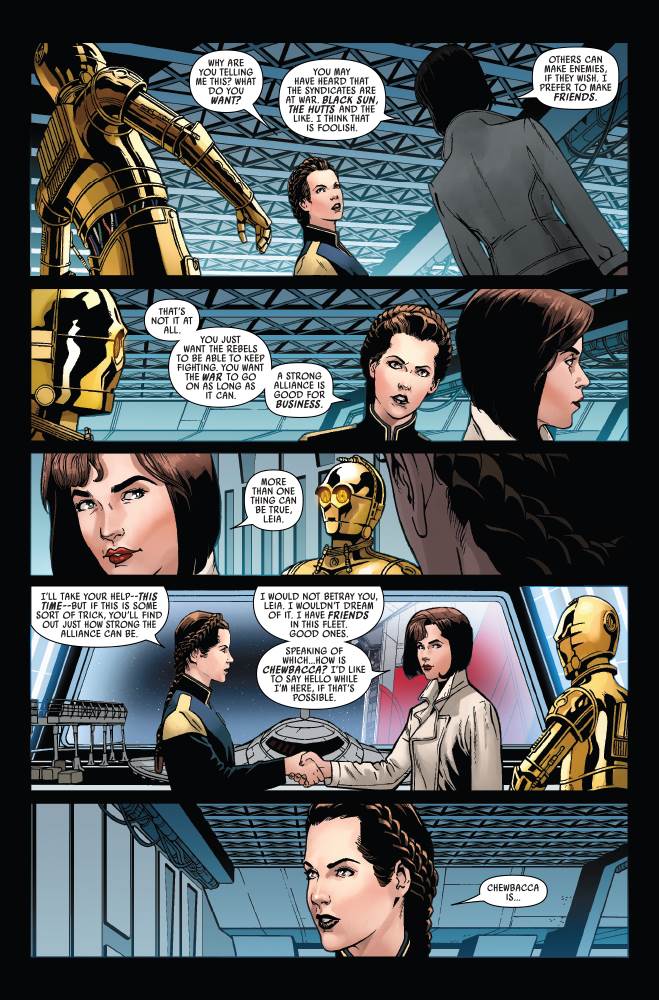 Star Wars #22 is available now wherever comic books are sold.