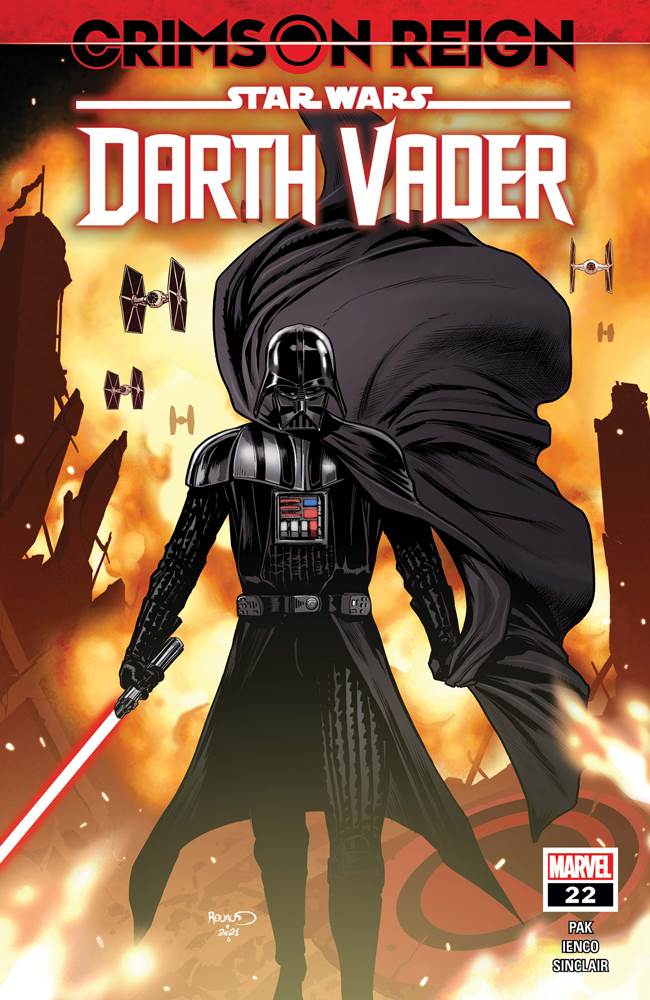 In last month’s issue of Star Wars: Darth Vader from Marvel Comics, the titular Dark Lord of the Sith revealed that he’s been aware of assassin Ochi of Bestoon’s betrayal and allegiance to Crimson Dawn. Now Vader has Ochi and Padmé Amidala’s former handmaiden / body double Sabé under his thumb and has brought them both back to the planet Naboo, and more specifically to the spot where in a previous issue the Dark Lord took down the enormous Sando Aqua Monster.

A pack of equally vicious (though much smaller) native beasts is feasting on the sea creature’s corpse, but Vader uses them to teach Ochi and Sabé a valuable lesson– it’s best to have multiple opposing forces eat each other alive than have to go up against all of them in combat. 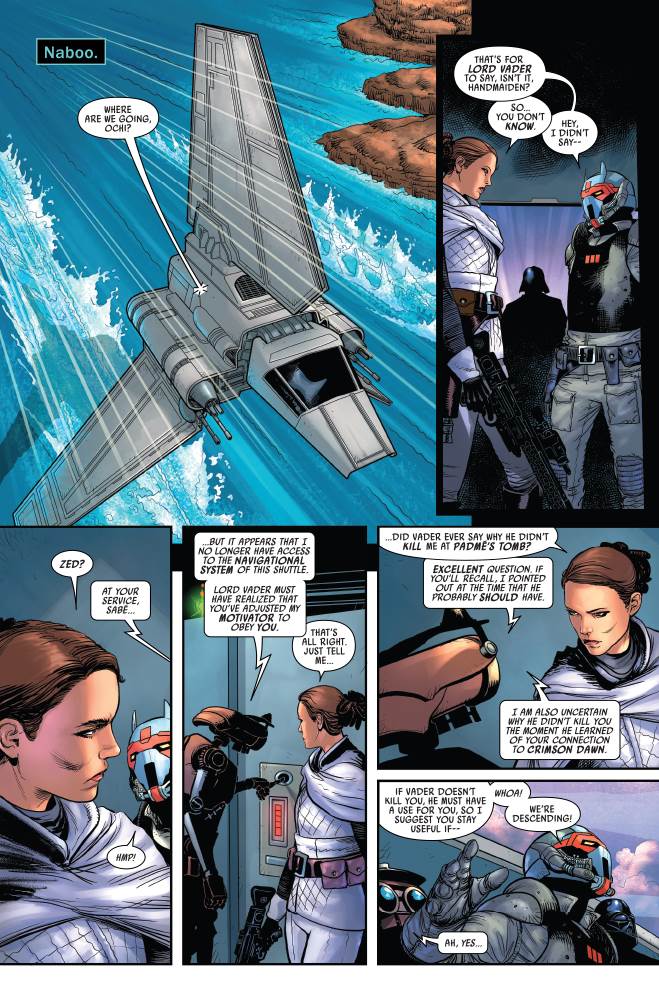 This particular lesson is conveyed via an extended action sequence that’s rendered beautifully in easy-to-follow art by illustrator Raffaele Ienco, and once both Sabé and Ochi better understand the specifics of their predicament, Vader is prepared to set the next phase of his plan into motion. The opening scene becomes a metaphor for the events that play out through the remainder of the issue: Darth Vader and his underlings set crime syndicate Crimson Dawn and Vader’s enemies within the Empire against each other, without too much concern about the collateral damage these battles end up incurring. That’s why it’s a good thing that Ochi of Bestoon shows up on the planet Oro Sankeria to warn the Revengers about the incoming skirmish before the ragtag operative team gets blasted out of existence. 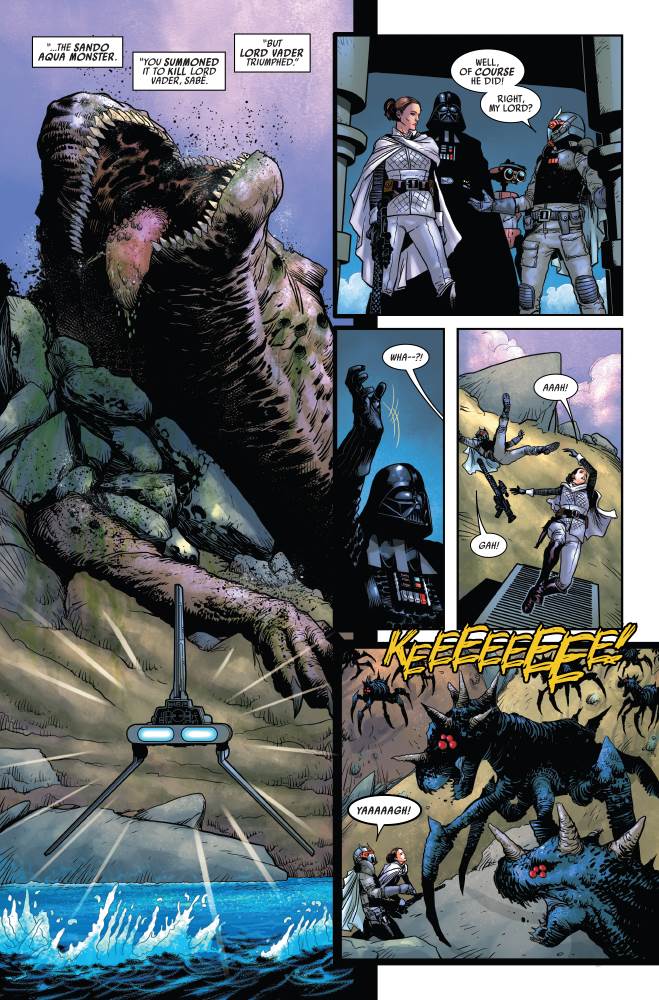 Darth Vader #22 ends with General Romodi’s forces having been obliterated by a Crimson Dawn cell that also manages to get taken out by those same stormtroopers and TIE fighters in the process, all as part of the Dark Lord’s plan. Then, as a shocking cliffhanger of a twist ending (SPOILER ALERT), Sabé reveals that she’s finally put the pieces together as to Vader’s true identity– that of former Jedi Knight Anakin Skywalker, her best friend’s husband who she never quite trusted. This shocking disclosure opens up a whole new can of worms for this already-excellent title, and I can only wonder what plans writer Greg Pak has for future issues. It feels like anything can happen at this point, especially considering we don’t know Sabé’s fate after this moment in the Star Wars timeline. I don’t foresee Vader killing her, necessarily, but something’s gotta give in order for him to keep his dark secret. I have a feeling that Qi’ra and Crimson Dawn are going to be big factors in this turn of events (this arc is still part of the current “Crimson Reign” crossover, after all), and for those reasons– among numerous others– I’m definitely looking forward to seeing how it all plays out. 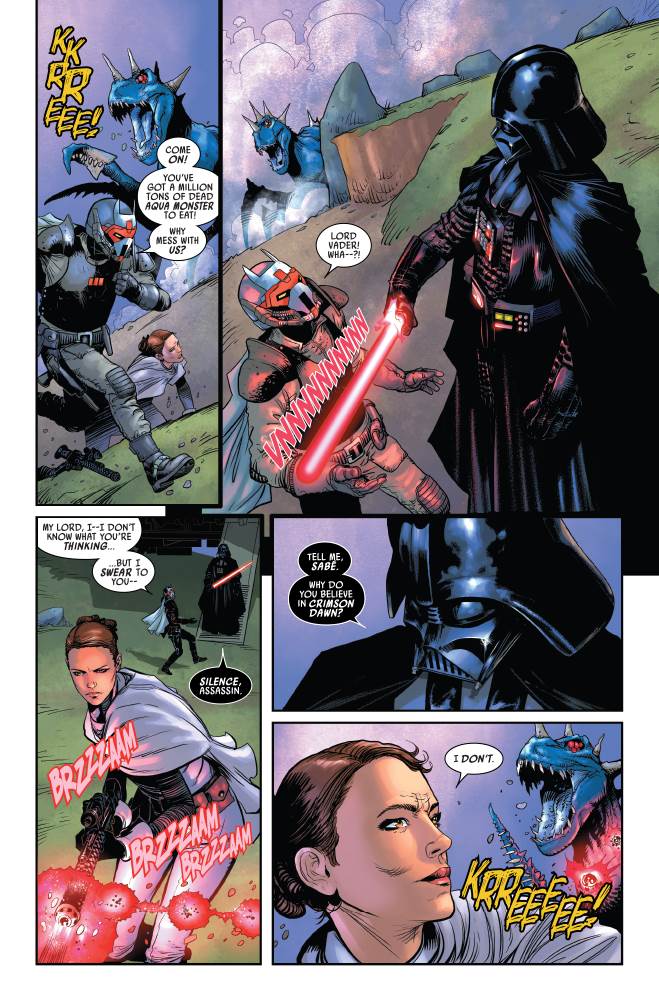