The NFL Draft is here and football fans everywhere are living their best lives. Last year though, we put a little bit of a Marvel twist on football with one of our drafts on the Zzzax of Life Podcast. Kyle and I were joined by Cole to draft our own Marvel football teams. 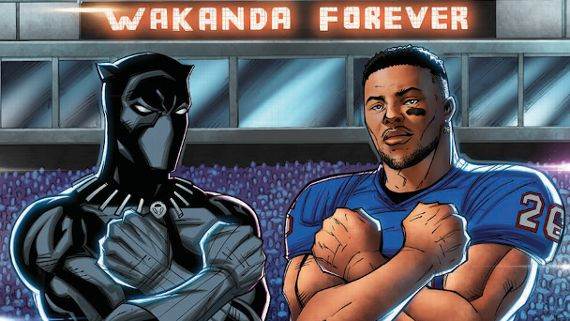 In the interest of time, and the interest of not losing all of our listeners, we did not actually draft full 22-player Marvel football teams. Instead, we went more of the fantasy football route and each picked a quarterback, a runningback and a wide receiver. Then to add our own little twist to it, we also each selected a coach. So let’s take a look at the Marvell football teams we selected.

Kyle made it a point to hit the target at the quarterback position, going with a guy who literally cannot miss in Hawkeye. He especially will never be able to overthrow his wide receiver, because nothing goes over Drax’s head. His reflexes are too fast. Good luck finding his runningback. When Ant-Man shrinks down with the ball, it will be much easier for him to find holes in the defense. And of course, getting the greatest leader in the Marvel Universe to coach your team is never a bad idea. Captain America could certainly lead this team to victory.

That’s right, I’m going to talk about my picks in the third person. Get used to that. Same concept at quarterback here. Bullseye also can’t miss but, unlike Hawkeye, he’s more accustomed to throwing various things and not just shooting arrows. Of course, off the field issues might be a problem for him as well. You know, with all the murders and whatnot. As for wide receiver, the one thing you never want that player to do is drop the ball. Something tells me Spider-Man will have some great hands. A runningback who can just phase through all of the defenders? Sign me up for Vision at that position. And finally, a coach who can read the minds of his opponents is probably going to be very effective. Professor X seems like a solid choice there.

Cole went for a combination of muscle and brains with this lineup. Known for his fastball special, Colossus is a very strong pick at quarterback. If he can throw a football as well as he throws Wolverine, he could certainly be a great quarterback. At the wide receiver position, talk about wingspan. Mr. Fantastic doesn’t even need to leave the line of scrimmage to make a catch 20 yards down field. Good luck defending a fade route against that. As defensive gameplan can get completely, well… smashed, with Hulk at runningback. He’s going to be tough to stop, but also likely going to draw quite a few penalty flags. And if Cole’s receiver isn’t the smartest character in the Marvel Universe, his coach certainly is. You can bet Moon Girl can come up with a gameplan to win any game.

Mack (yes, third person again) won this one with 61% of the vote. That Bullseye to Spider-Man combination was just too much and Vision being literally untackleable just put it over the top. And when Professor X knows exactly what the other team is going to do, the players’ jobs get that much easier.