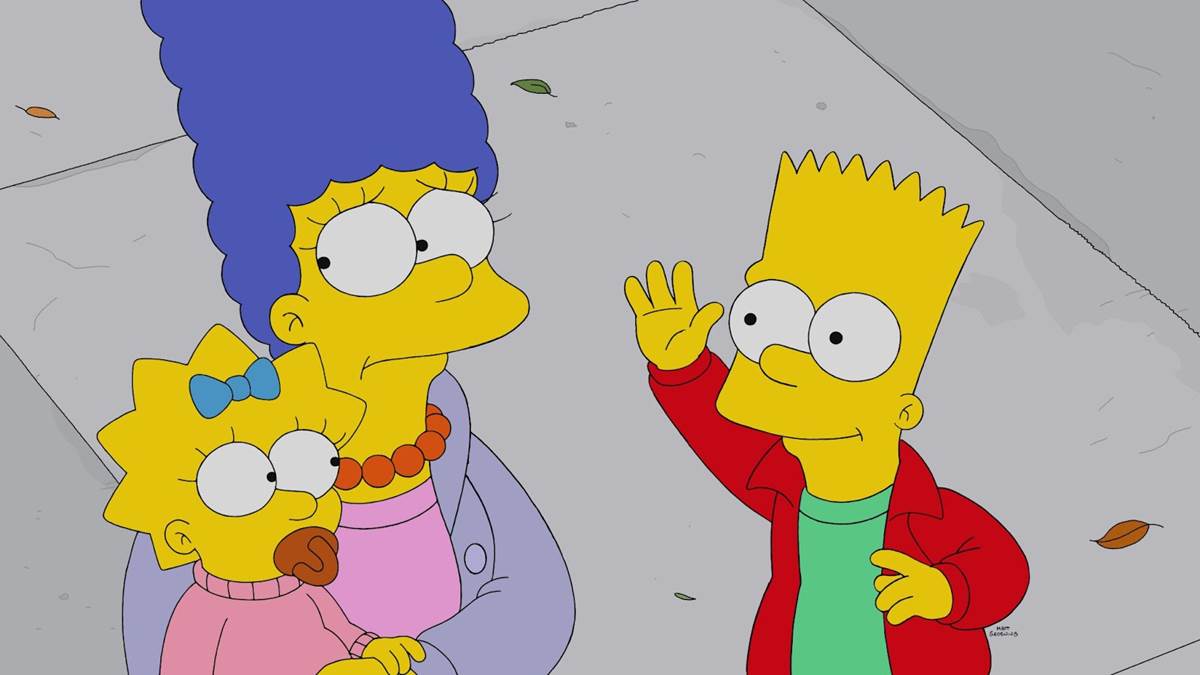 Hello and welcome to Laughing Place’s regular recap of new episodes of The Simpsons on FOX. This week’s installment, entitled “Marge the Meanie,” is the 20th episode of the long-running animated sitcom’s 33rd season.

Chalkboard gag: At the very end of the episode during the backwards title sequence, the chalkboard gag reads, “I will not violate the law of entropy.”

Couch gag: There’s no couch, but the members of the Simpson family are on Mount Rushmore instead of former presidents. Homer notices a tree branch growing out of his nose and Marge tells him not to “pick it,” but he does anyway and it causes his side of the mountain to collapse. “Marge the Meanie” begins at the Springfield Retirement Castle, where Abe Simpson gathers his elderly friends, saying “It’s time” with each new recruit. He gives a rousing speech readying the residents for the cross-town shuffleboard tournament. The Simpsons arrive to watch the tournament and Bart observes that it isn’t fair because the other team has a ringer– a super-fit gentleman who does push-ups against his 80s car. But the Retirement Castle wins anyway, and in the crowd Marge notices a woman who won’t stop staring at her. After the tournament, Marge approaches the woman, who calls her “Margie the Meanie” and runs away to board a bus, claiming Marge “ruined her life.” “That is my old principal,” explains Marge. Bart guesses that Marge might have actually been a bad kid in school and gets excited that they may have been “the same”: “I finally have a parent I’m proud of!”

At home, Patty and Selma talk with Marge about how she made the principal’s life a living hell, and we get a flashback to Springfield Middle School, where Marge gets bullied by the other girls. She complains to the principal, who rebuffs her grievances, but then trips and falls into a garbage can. All the kids laugh and give Marge credit for the incident, and then we see a montage of Marge playing further pranks on the principal, encouraged by the rest of the students. In the present, Bart hugs Marge, full of admiration for her childhood hijinks. At the Android’s Dungeon comic book shop, Ralph Wiggum wants to buy “the one where Batman eats lasagna” and Comic Book Guy explains that that is “Garfield, who is not a bat but a cat.” Marge, who is in the shop with Bart, observes the interaction and Bart suggests she should teach CBG a lesson, and a superhero named Uber Hombre (for copyright reasons) eggs her on in her imagination. 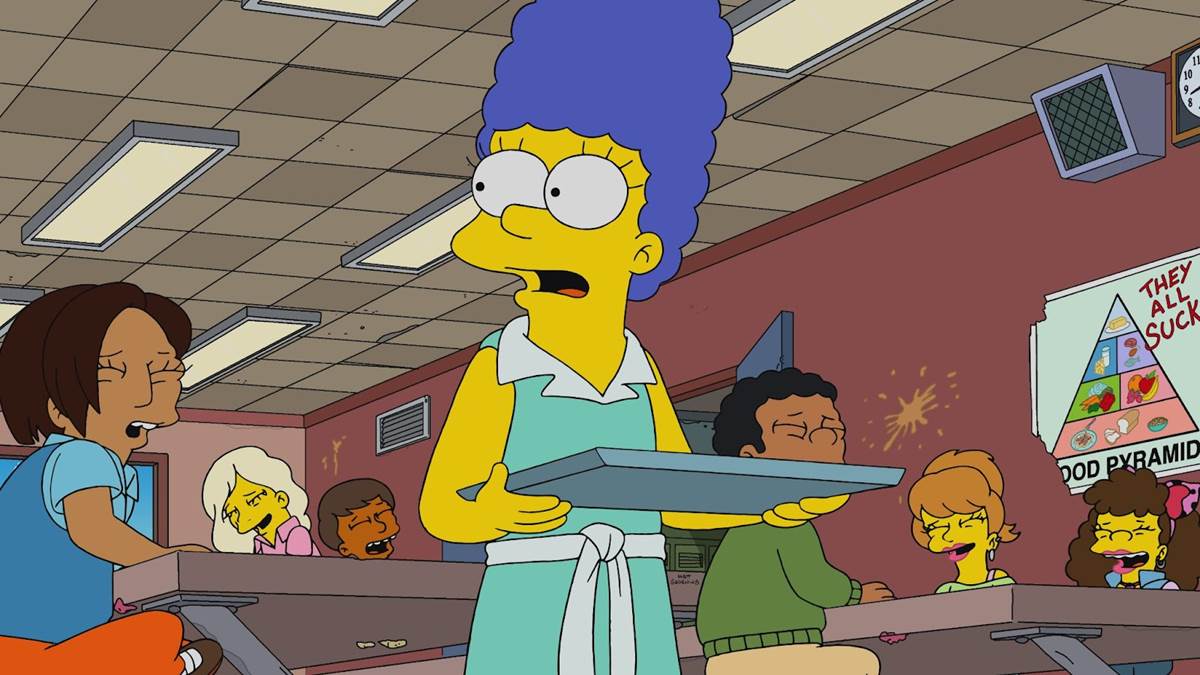 When CBG starts mocking Milhouse as “Lex Loser” next, Marge nods to Bart, who presents “Mr. Guy” with a crisp $20 bill. When CBG turns to get a Spider-Man comic off the shelf, Marge puts grease on his soda cup. CBG grabs for his cup and soda spills all over the store, causing him to exclaim “Zoinks!” and close for business. Then there’s a montage of Marge and Bart laughing about the prank all over town, and at home Homer wants to know what’s so funny. When Bart explains they did a prank together, Homer realizes Bart got his wild side from his mother, which distresses him. “So Bart’s not like me, Lisa’s not like me. There’ll be no evidence I was ever on this Earth… wait, maybe Maggie.” Homer looks over to see Maggie with a very Homer-like beard, but then Marge wipes gravy off the baby’s chin. Homer goes to Moe’s Tavern to drown his sorrows, and a vision of Lisa in his foam insists there must be something he has in common with his kids.

Homer raises a toast to “Lisa ‘what’s-her-middle-name’ Simpson,” but Moe and the barflies admit they were never convinced Lisa was Homer’s child. Homer vows to prove them wrong: “You losers will never have this!” he says, flashing a “World’s Greatest Dad” keychain, but then realizing that he left Maggie in the car. At the supermarket, Marge runs into Helen Lovejoy, who insults her food choices, and Bart insists on playing another prank. When Helen uses the restroom, Marge and Bart sneak low-quality food items and “Gassy Granny” underwear into her shopping cart, causing her to be embarrassed at the checkout cashier. Marge and Bart toast to their prank’s success with fruit cups, while at home, Homer attempts to find common ground between Lisa and himself. He tries a vegetarian sandwich and likes it, so he joins Lisa at a vegan restaurant, but that night he admits to Marge that he hated the meal. 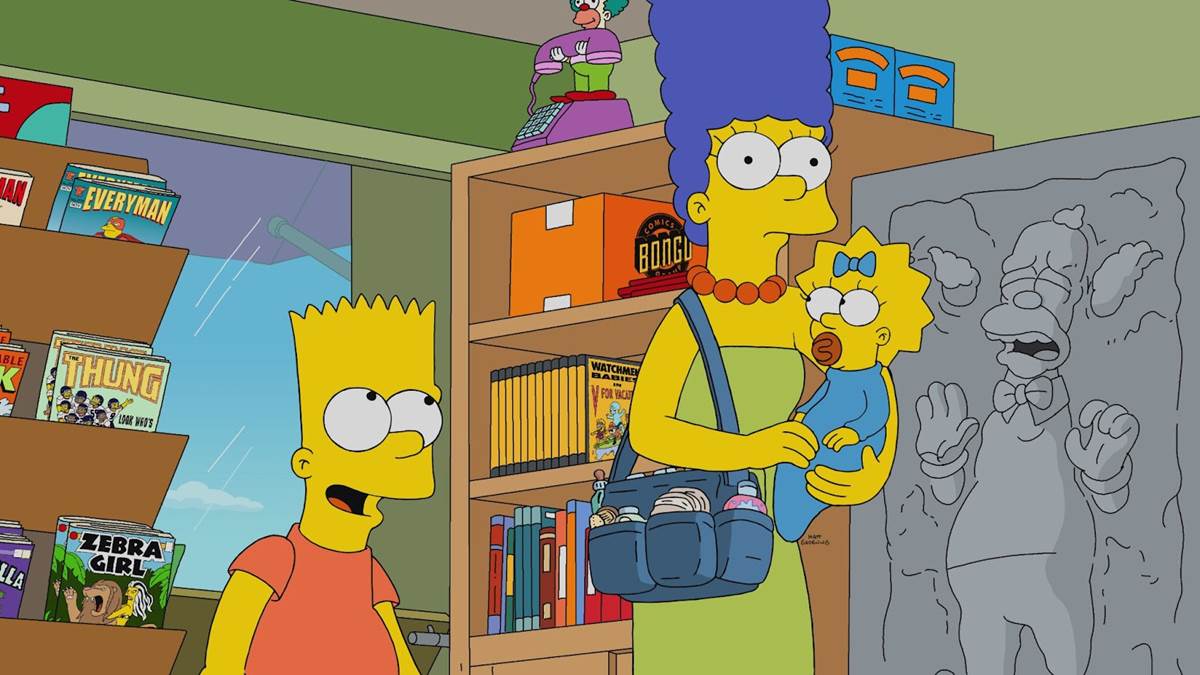 Marge pranks Homer by making him take a bite out of a ground-up kickball instead of the emergency sausage he keeps next to the bed, and he gets angry at her and Bart. “Do you think I like doing this pranking?” Marge asks. “I’m behaving like a little brat, and it’s made me a better mother. I can’t stop because I’ve never been closer to Bart.” Marge compares waiting for Bart’s approval to waiting for the next Avatar movie: “the real unobtanium was the sequel.” The next day Marge and Bart go to Sprawl-Mart, where Smithers blocks other shoppers from entering the store while Mr. Burns shops for chewing gum. In retaliation, Marge waits for Burns to exit the store and throws her pearls on the ground in front of him. “He’ll just fall into that soft grass over there,” she says, but Burns stumbles into the street and gets hit by multiple cars, winding up repeatedly electrocuted atop a power line. “We went too far,” Marge says, but Bart just yells “We’ve never been closer!” as he runs away from taking responsibility.

A court-ordered therapist tells Marge she’s lucky Mr. Burns is okay, and Marge explains that she was taught a lady should never express emotions, so she doesn’t except when she snaps every couple of decades. The therapist advises Marge to make peace with her old principal, so at home she tosses all of her prank supplies, upsetting Bart: “I don’t know who I am without pranking! It’s in our blood.” Marge gives in to Bart’s crying and says she thinks she has one more prank in her. Homer helps Lisa cook a vegetarian meal, and finally admits he hates the food, but when both of their tongues start swelling up he realizes he does have something in common with Lisa: an allergy to allspice (among other things, according to the doctor they see at the hospital). Marge apologizes to her old principal, who smells the flowers Marge brought only to get her face splashed with blue paint. Bart runs in holding a remote control and the ex-principal dies from a heart attack from the surprise of the prank, and after she’s wheeled away on a gurney Chief Wiggum tells Bart he’s going to juvie and Marge that she’s going to women’s prison. Bart wishes the old lady hadn’t died and says he’ll “never prank again,” and at that point Marge’s principal wakes up and says, “We got ya!” “Uh oh Lou, we have got a zombie situation here,” observes Wiggum. “Aim for the brain. It’s the only way.” But Marge explains the truth that she was just teaching Bart a lesson, and at home Bart says he actually learned a lesson, giving his mother a can of peanut brittle that actually contains peanut brittle. “Enough with the pranking,” Bart says, but as Marge walks away we see that Bart has put a sign on her butt that says “The End.” Then when Bart turns around he has a sign on him that reads, “It never ends.”

In the coda, Marge writes a stack of letters to apologize for the many pranks she pulled on the people of Springfield, including Agnes Skinner, which wraps up “the As.” Then The Simpsons opening title sequence plays in fast-reverse. 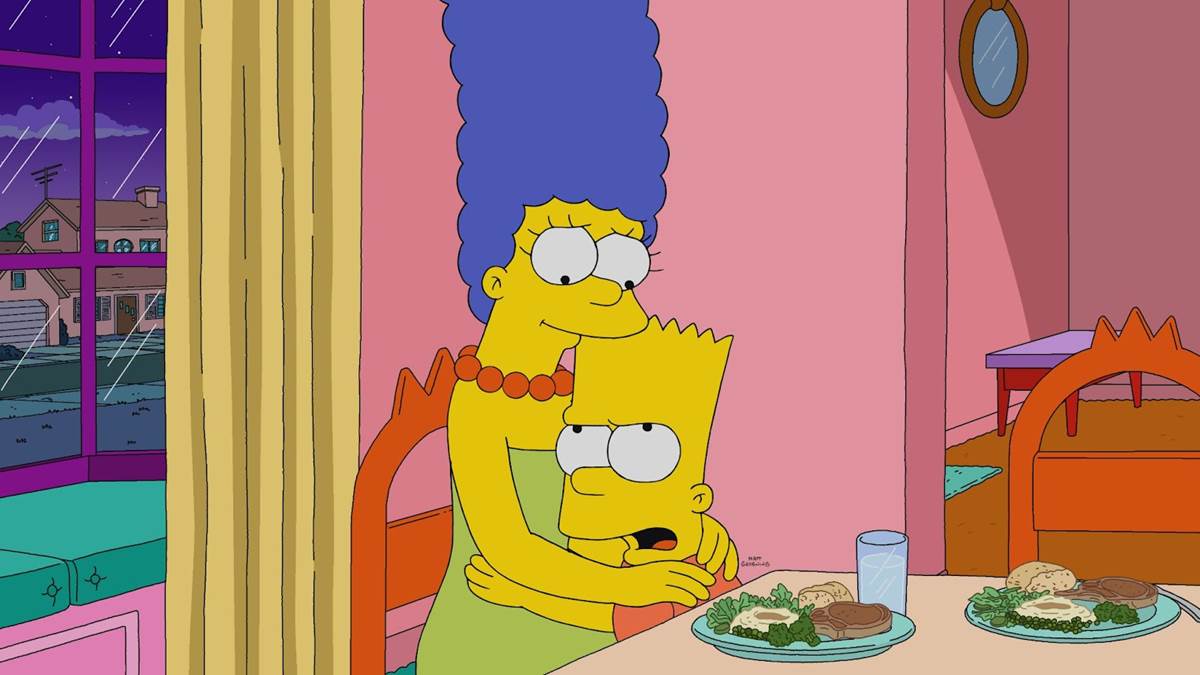