“Date Expectations” is an unusual episode of Raven’s Home for two reasons. The first is that neither Raven nor Booker have a vision, at least not one that we get to see. The other reason is that Victor is absent, who is the reason Raven and Booker moved to San Francisco (it’s his second absence this season). Here’s a recap of everything that happens in “Date Expectations.” 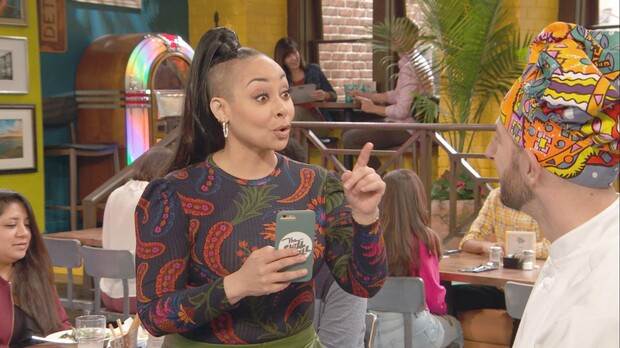 Booker has recruited Alice to help him surprise Cami with an invitation to the homecoming dance. After rigging her locker with lots of surprises, Booker and Alice talk with Ivy and she informs Booker that Bayside doesn’t have a homecoming dance. He looks around and realizes that all of the posters in the hallway only mention a homecoming football game. Cami opens her locker, which activates music, lights, a confetti cannon, and a talking Booker cardboard cutout asking her to go to the dance with him.

Ivy and Booker talk after school and he learns that Cami’s mom banned school dances when she became principal. Booker is confused, mentioning that he saw a dance in his vision and Ivy asks what he means. Booker covers, saying he’s not psychic. Ivy reveals that she hates dances because only the popular kids get to plan and decorate for them. But when Neal arrives after football practice and tells Booker that he heard that Cami would go to the dance with him if there was one, he gets an idea to throw their own unofficial dance at The Chill Grill. Ivy is excited to get to plan it.

Raven visits The Chill Grill and finds Lazlo feeling down because he hasn’t received any messages through his dating app. Raven checks out his profile and makes some changes to his description. Lazlo thinks the changes are dishonest, but Raven calls it “creating a better truth.”

Cami meets with her mom to ask why they aren’t allowed to have school dances. She tells her daughter about her own experience in high school when she got stood up by her date at homecoming and Raven rubbed it in her face. She vowed to never let that happen to anyone when she became principal, but Cami convinces her to change her mind and let them have a dance.

In the hallway, Booker tells Ivy and Neal that everyone is talking about their dance, which Neal plans to DJ at. Booker is distracted when Cami walks by and Principal Rivera comes on the intercom to announce that Cami is hosting an official homecoming dance at the school. Booker realizes that Ivy will be angry if he goes to the school dance instead of the one they’ve been planning.

At the house, Ivy is furious about Cami’s dance. Booker suggests that they cancel theirs, but Ivy believes they can make it better and everyone will come to theirs. She wants revenge on Cami for that time she ruined her 10th birthday party.

Later, Lazlo comes by the house freaking out because he got a message on his dating profile. Raven helps him communicate and unbeknownst to her, the woman on the other end of the screen is Alana. Raven secures a date for Lazlo that is the same night as the homecoming dance, offering to help him get ready for it.

It’s the night of the dance and The Chill Grill has been decorated for the school dance. Booker tries to tell Ivy that he’s going to Cami’s dance, but Neal rushes in from the game and interrupts. When Ivy asks Booker to open the doors and let everyone in, they find that nobody came to their dance. Neal checks his phone and sees a video from Cami’s dance, which is packed. Ivy goes to the kitchen and screams, Neal begs Booker not to leave. When Booker finally tells Ivy that he is going to Cami’s dance, she tells him that he can either be her friend or go on a date with Cami. “A real friend wouldn’t make me choose,” Booker says before leaving.

Raven has given Lazlo a makeover that includes a wig and a suit, but he’s still nervous. She offers to do a practice date, during which Raven helps him create a smooth persona named “Laz.” Feeling confident, Raven sends him out for his date.

Cami stands in the hallway waiting for Booker, worrying that she got stood up like her mother just as he arrives. She notices that he’s not smiling while taking photos and Booker tells Cami about his fight with Ivy. Cami didn’t know Ivy was planning a dance, but reveals that she did intentionally ruin her 10th birthday party. They were best friends until Ivy went to the genius school and didn’t have time for her anymore. Booker wants Cami and Ivy to make up, but Cami refuses to go to Ivy’s dance. Booker gets an idea and starts a conga line, leading the students out of the gym.

While Lazlo is on his date, Alice comes downstairs with one of Raven’s romance novels and tells her aunt that she knows all about dating now. Raven asks what she means and she says you just have to lie about yourself like the guy in the book and like Laz. Raven admits that she messed up and that they need to stop Lazlo from making a mistake.

Booker leads the conga line into The Chill Grill and Cami realizes where they are. Booker makes Cami and Ivy talk and they both rant at each other at the same time about the past, but finish by apologizing and hugging. Neal gets to work as the DJ and Ivy and Booker make up.

After the dance, Lazlo is alone at The Chill Grill cleaning up and back in his chef’s uniform. Raven and Alice arrive and Raven reveals that they went to the restaurant to try and stop him. He messaged his date and confessed to not being authentic, asking her to meet him there instead. Raven and Alice leave, but Ravne turns around to spy as she sees her arch-nemesis Alana enter. Alana admits to liking the real Lazlo as Raven screams “NOOOOOOO!” pressed against the glass.

Disney Channel hasn’t yet announced when the next episode of Raven’s Home will air, but they did announce some big news for the show’s 100th episode. Click here to learn more and I’ll be back with another recap as soon as the show resumes.