Hello and welcome to Laughing Place’s regular recap of new episodes of The Simpsons on the FOX network. This week’s installment, entitled “Meat Is Murder,” is the 21st episode of the long-running animated sitcom’s 33rd season. 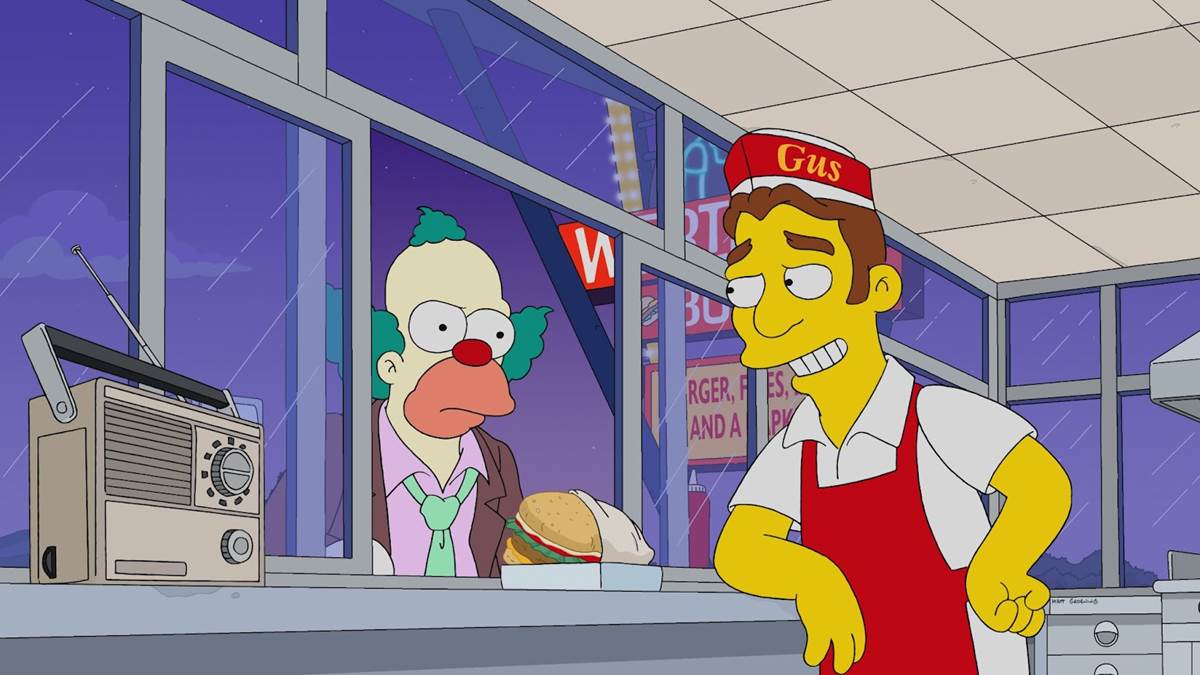 “Meat Is Murder” begins at a stand-up comedy show in the early 1970s, where Krusty the Clown’s act does not go well. Afterward Krusty drives to a desolate take-out burger stand, where the attendee Gus (guest star John Lithgow) serves up his meal lickety-split, showing off his invention: the triple-patty flipper. Krusty takes advantage of the situation to turn the burger joint into Krusty Burger. Cut to the present, with Krusty celebrating the 50th anniversary of Krusty Burger with an event called Krusty Fest. At the festival, Sideshow Bob signs autographs and inside a tent the only copy of Krusty’s E.T. ripoff movie Me and the Space Clown is playing on a loop. Marge tries to give Grampa Simpson a burger, but Abe refuses to eat it: “I’ve got my reasons.” Homer buys “one pillowcase worth of 25-cent Krusty Burgers” and he and Bart wheel them home in Maggie’s stroller until a flock of birds descend and begin to eat them. Grampa calls this the “Simpson curse.”

Augustus Redfield, an elderly Gus from earlier, shows up claiming to be the ninth richest person in the world and threatens to destroy Krusty. He has purchased Krusty’s parent corporation and strips him of everything, including his stage name. Gus changes the burger price to 24 cents to win over the crowd that begins booing him. “I finally have the one thing every businessman wants: total revenge on the clown who stole his dreams.” Grampa says he used to be Gus’s partner, and the two friends are reunited, with Gus telling Abe his life is about to change. Another flashback to 50 years earlier shows Krusty working as the mascot for Gus and Abe’s restaurant, but he demands more pay– “I finally found my true purpose as an artist: selling cheap meat to fat kids.” They fire him and he goes off to found Krusty Burger, which is immediately popular, and Gus vows to take revenge. In the present, Gus tells Abe he is now on his board of directors, but Grampa is worried he’s going to blow the opportunity because of the Simpson curse. He asks Lisa to come with him to New York because he couldn’t do it without their special bond. They hop on Gus’s helicopter and he sings a parody of “Pure Imagination” from Willy Wonka and the Chocolate Factory. Lisa is disgusted by Gus’s wealth, but Gus introduces her and Abe to his family anyway. All the family members have their own various issues a la Succession, and inside their mansion Gus has preserved his old burger stand, where he and Abe immediately start flipping burgers again. Lisa rides horses through virtual scenery with Gus’s daughter Sheila, who tells her that Gus has gone soft because of his happiness at being reunited with Abe. Sheila says she wants to rebrand the family business into a more eco-friendly corporation.

Bart complains to Homer about how Krusty’s show has changed– it’s now “Herschel the Comical Man Show” with “Nothing Mel” as the sidekick. Watching in the mansion, Abe and Gus laugh about how they ruined Krusty, while Gus’s three kids scheme against him. Lisa screens a Chloe Zhao movie about saving the Earth, and Sheila tries to persuade Lisa to help her gain control of the company. Abe thanks Lisa for joining him on this journey, and at a board meeting later on Sheila says her father is a dinosaur and proposes a vote of no confidence in her father. Abe becomes the tie-breaking vote, and goes against Lisa’s advice to vote “no.” Gus fires all of his children and reveals that he only brought Abe in to “smoke out his backstabbing children.” “I win because you voted no!” As a last resort, Grampa goes into one of his long rambling stories, and claims to be mentally incompetent. 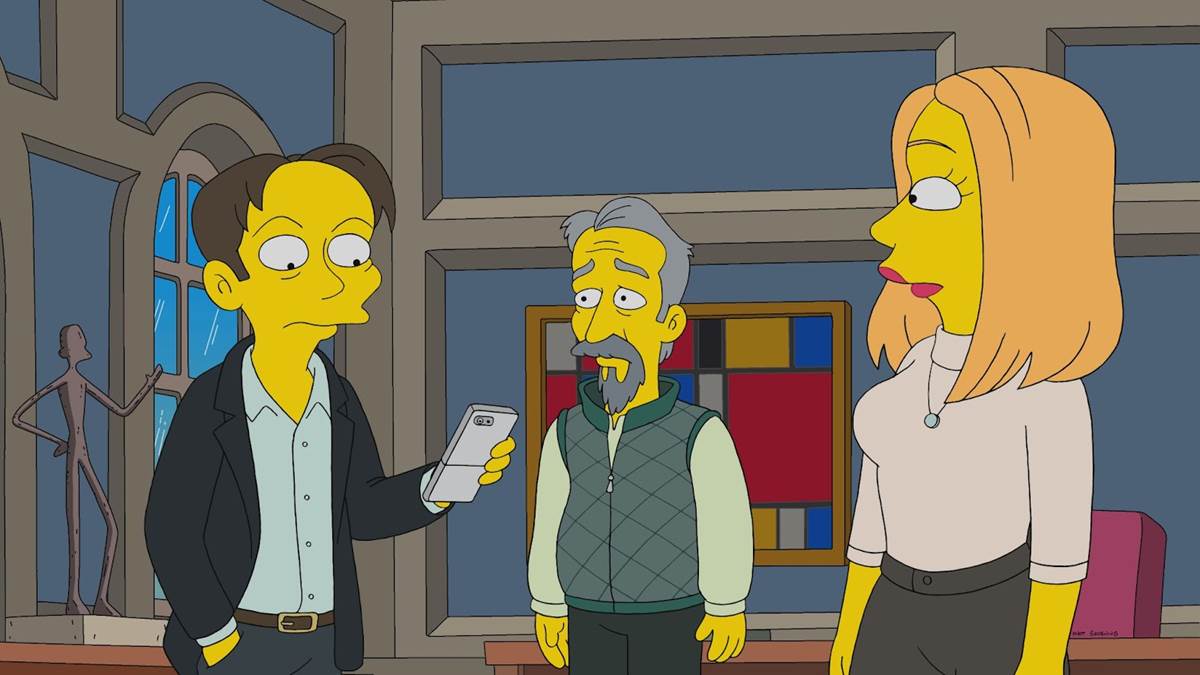 The vote gets nullified, and the company grinds to a halt. “Tough banana skins,” say Lisa and Grampa simultaneously. “Nerts to that curse!” says Abe. “Every decision I ever made in my life led to me having you as my granddaughter.” In the coda, Krusty has become a farmer in Israel. “It feels good to finally find inner peace.” A helicopter shows up and a lawyer gives Krusty back his life. “He was a clown?” one of the other farmers asks. “He was the least funny person on this socialist commune.” 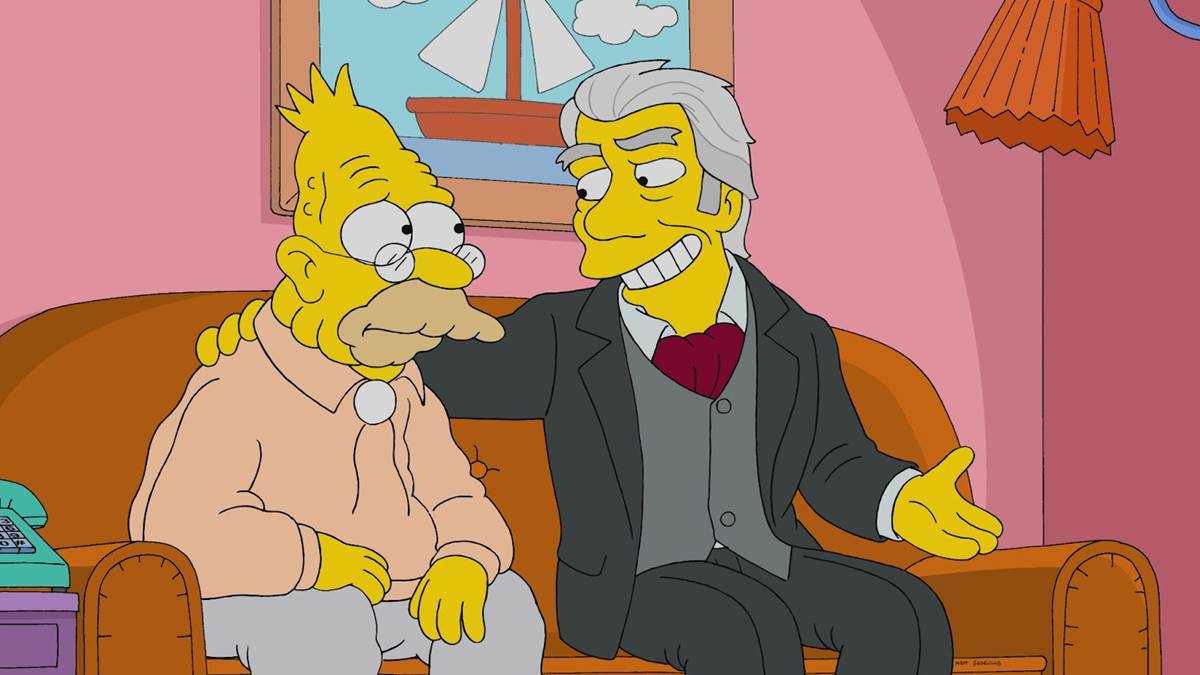