In the shocking cliffhanger ending of the first issue of Marvel’s new Star Wars: Han Solo & Chewbacca comic-book miniseries, Han ran into an older man claiming to be his father in a Corellian bar. Of course my first thought at that point was, “That can’t really be Han’s dad.”

Well it turns out Han had the exact same initial response, because Han Solo & Chewbacca #2 (released today, more than two months later) begins with him slugging the bearded gentleman for attempting to pull a scam on him– but not until after we see a flashback to a young Han’s conversation with his real father while overlooking the Corellian shipyards. 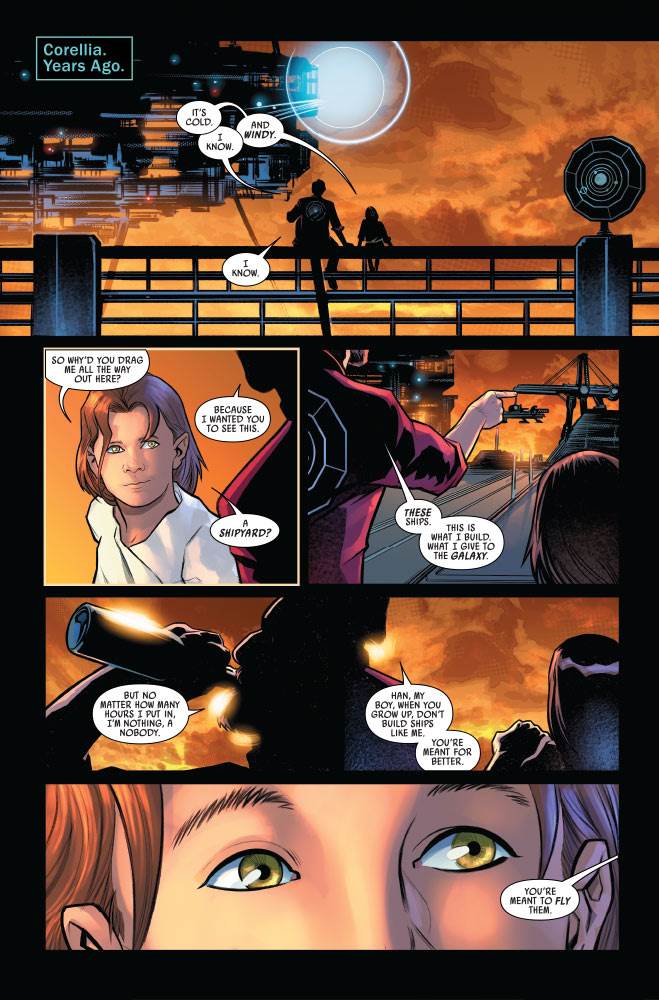 The two men go back and forth about what the actual truth of their relationship might be, and the scene ends with Han (not to mention me, the reader) actually kind of being on the fence about the whole father situation. Regardless, “Ovan” gets recruited to help in Han, Chewie, and Greedo’s heist mission because of his access to power tools, and along the way the old man provides some more evidence for his supposed identity. Meanwhile on Tatooine, Marsha Buck Vanto approaches Bib Fortuna in Mos Espa to get information on Han’s current whereabouts, under threat of dragging the wayward Twi’lek majordomo back to Ryloth to answer for his crimes. And despite some clever ideas on Han’s part, the Corellian caper doesn’t quite go as planned, culminating in everyone but Chewbacca getting cornered by security guards in Augustus Graves’s apartment. Two issues in, I’m definitely digging this comic so far, and I have to give writer Marc Guggenheim credit for almost making me believe we’ve met Han’s dad, though I still suspect an alternate truth about the man’s identity will come out before the miniseries ends. My guess is that he knew Ovan and heard numerous stories about Han, then somehow took possession of his belongings. But whether or not this guy turns out to be a con artist doesn’t really matter all that much– the point is that I’m enjoying the ride along the way. David Messina’s art remains eye-catching and attractively stylized without being overly cartoonish, and I love that this series is actually referencing characters and events from Solo: A Star Wars Story (there’s another brief flashback to Tobias Beckett as a second father figure that Han learned not to trust through experience) instead of side-stepping it altogether. Han’s constant bickering with reluctant partner Greedo is also dependably amusing, but if I have one small nitpick about this title it’s that Chewbacca doesn’t actually have all that much to do in it so far, despite his name being on the cover alongside Solo’s. Let’s hope Chewie will get in on more of the action in next month’s installment, and that whoever he really is, Ovan stays as intriguingly interesting as he is now. 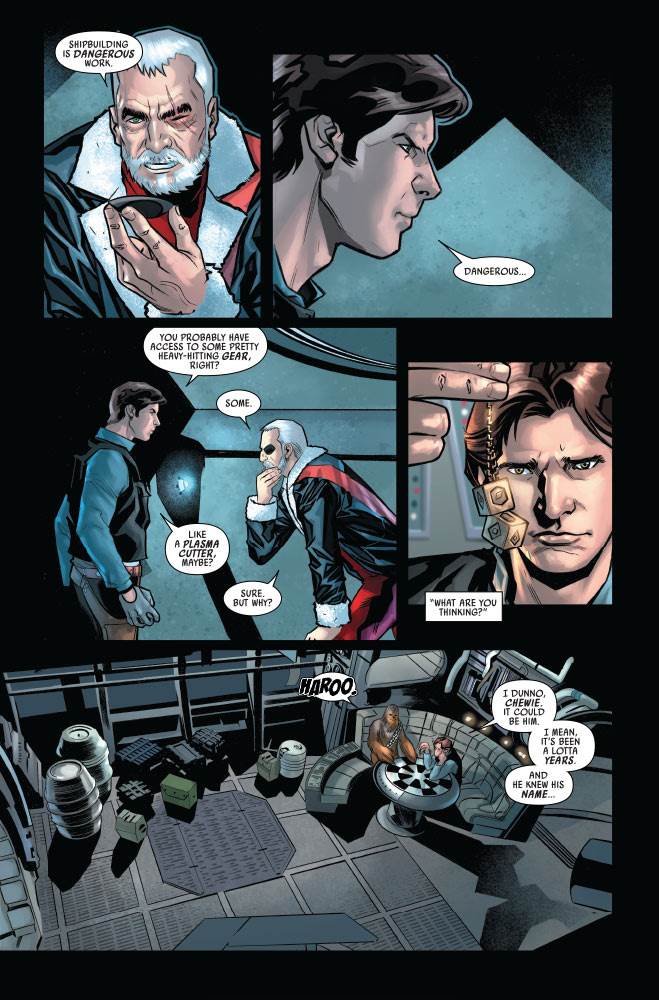