In the third of the Bollywood-inspired specials, we see Mira, Royal Detective attending a special event at the palace that is set to see the debut of Prince Neel and Princess Ambika’s flying inventions. 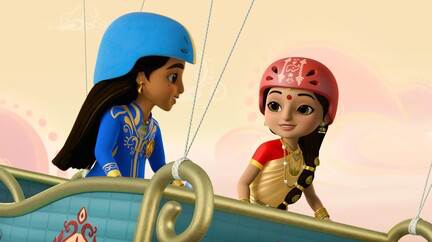 The Mystery of the Royal Flight

In the latest of four Bollywood-inspired special episodes of Mira, Royal Detective, Mira is at the palace attending a special event where Prince Neel and Princess Ambika are going to show off their latest inventions.

Just as everyone is getting their assignments for the big event, Mikku and Chikku come on to the scene in a smaller version of Prince Neel’s new strato-glider.

A clutzy guard is also on scene today, stumbling around and making the easy process of moving the inventions a rather difficult one. But Mira can’t stay and watch, she has been assigned to greeting guests of the special event.

Prince Neel is having issues and discovers that he has a hole in his invention, a tear in the orange balloon. People came from all over the kingdom to see him launch his invention, but what happened and what are they going to do?

WE’RE ON THE CASE!

Based on the timeline that Mira constructs, it must have been someone at the party who put a hole in the invention. But, Mira is part of the royal staff so she can’t investigate without being noticed and sports a disguise. Though, I must wonder why this happened considering everyone who runs into her, she explains that she’s Mira in disguise, so that kind of defeats the purpose. But this is a Disney Junior show, it’s not really meant for me.

While in disguise, Mira finds a piece of fabric from Prince Neel’s balloon on his invention. Too bad another guest is looking for Mira, Royal Detective, so cue the Mrs. Doubtfire-esque antics of going back and forth. While Mira needs to greet guests and investigate, Mikku and Chikky take over with a special musical number.

The party guests are dancing along with the musical number, and Mira shares her findings with Neel, but by the end of the number, Princess Ambika finds a hole in her invention too. Neel says he’ll help the princess fix her invention, but Mira wants to investigate and figure out what happened before they launch their inventions. She proposes that they delay the invention, but Neel doesn’t want to upset the royal guests.

As Mira is talking to the queen, she realizes that clutzy new guard who keeps getting his sword caught on things, even tearing a hole in the tent where the food is being set up.

Mira runs after Neel but it’s too late and he has taken to the sky, so Mira and Princess Ambika are chasing him down in their air shark with Mikku and Chikku and close behind in the test vehicle.

Together they all work as a team to save Neel, but Mikku and Chikku, who once again think the Princess’s vehicle is a real shark, attack it and destroy part of the wing. So now, they must take the parts of Neel’s ship that works combined with Ambika’s and they successfully make a water landing and crank up their aircraft so they can successfully make it over a waterfall as well.

Inspired, both inventors work together to make a new invention, the Strato-Shark-Float, which flies and can go on water.  The royal guests all love the new invention and are ready to bring them back to their own kingdom.

This episode of Mira, Royal Detective is now available on Disney Junior and the DisneyNOW app. You can catch up with other episodes in the series on Disney+.