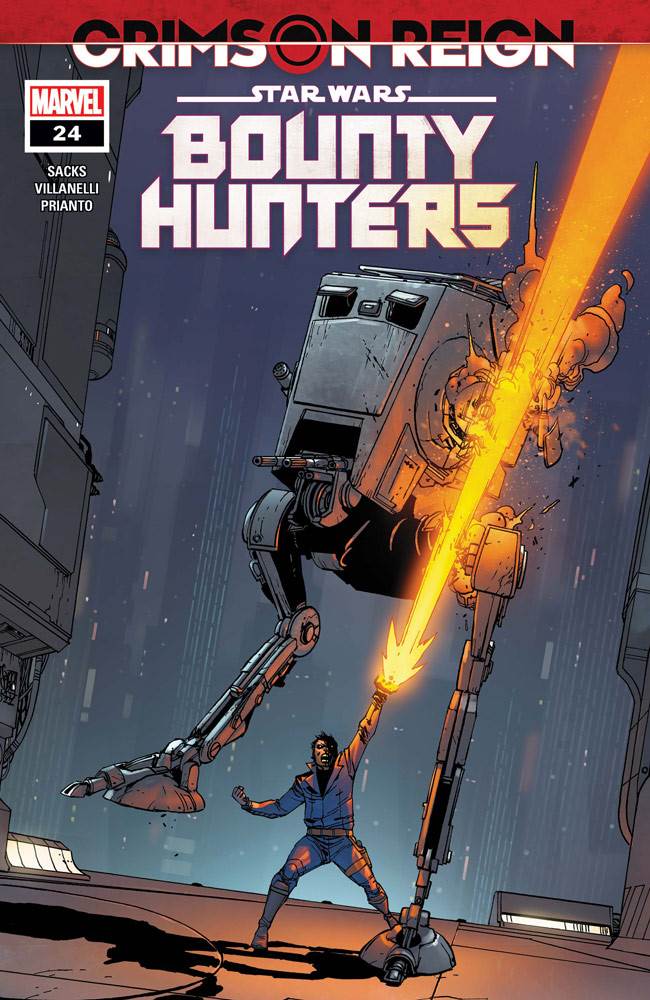 For the first couple years of Marvel’s Star Wars: Bounty Hunters comic book, the lead character was undeniably Beilert Valance– a character borrowed from the original, now-Legends-canon Star Wars comics of the late 1970s and early 1980s. Then at the end of 2021’s War of the Bounty Hunters crossover event, Valance was conscripted back into service of the Empire and moved over to the pages of Marvel’s Star Wars: Darth Vader title.

But in issue #24 of Bounty Hunters, out today, Valance makes a return to the comic after a several-month absence– though at this point he’s still working under the Imperial thumb. But Bounty Hunters #24 begins with Dengar having infiltrated the ragtag crew of the Edgehawk– he’s working as a spy for Crimson Dawn (who isn’t these days?)– and his first task is to surreptitiously slip captured Unbroken Clan leader General Vukorah a blade to keep hidden. Then we cut to Valance on the industrial planet of Garel, where he’s running security for a Imperial officer giving a speech at the opening of a new munitions factory. Valance and his fellow underlings are hunting for Crimson Dawn assassins at the behest of Darth Vader, and soon one of the assailants makes his presence known, attacking in an AT-ST walker. There’s a pretty fun battle sequence between Valance (on a speeder bike) and the walker, which ends with a young girl toppling over the edge of one of the city’s characteristically precarious Star Wars platforms. Beilert manages to save the girl with some daring acrobatics, but his Imperial cohorts berate him for failing the mission, as another Crimson Dawn agent successfully takes out the officer during the distraction. On Nal Hutta, Dengar leads T’onga, Bossk, Zuckuss, 4-LOM, and Tasu Leech in a trap aboard the Crimson Dawn flagship Vermillion, while Losha must stay behind to watch over Vukurah– I’m guessing that means danger for her once again next month. On the Vermillion, the crew makes a valiant effort to defend themselves against the Dawn after being abandoned by that turncoat Dengar, but the issue arrives at a cliffhanger ending with them coming face-to-face with the dreaded Knights of Ren. That should prove to be an interesting match up in #25, but I really hope we’re also getting close to the climax of the Cadeliah storyline (I neglected to mention that’s why the titular bounty hunters are boarding Crimson Dawn’s ship in the first place). I’d love to see the “Unbroken Clan vs. Mourner’s Wail” narrative wrap up soon and then maybe have this title switch over to more self-contained bounty-hunting adventures (you know, with actual, honest-to-goodness bounties being hunted) for a little while. That said, I did quite enjoy this issue and thought writer Ethan Sacks and illustrator Paolo Villanelli both did a really good job in constructing and staging both the action and the quieter, more character-driven moments.