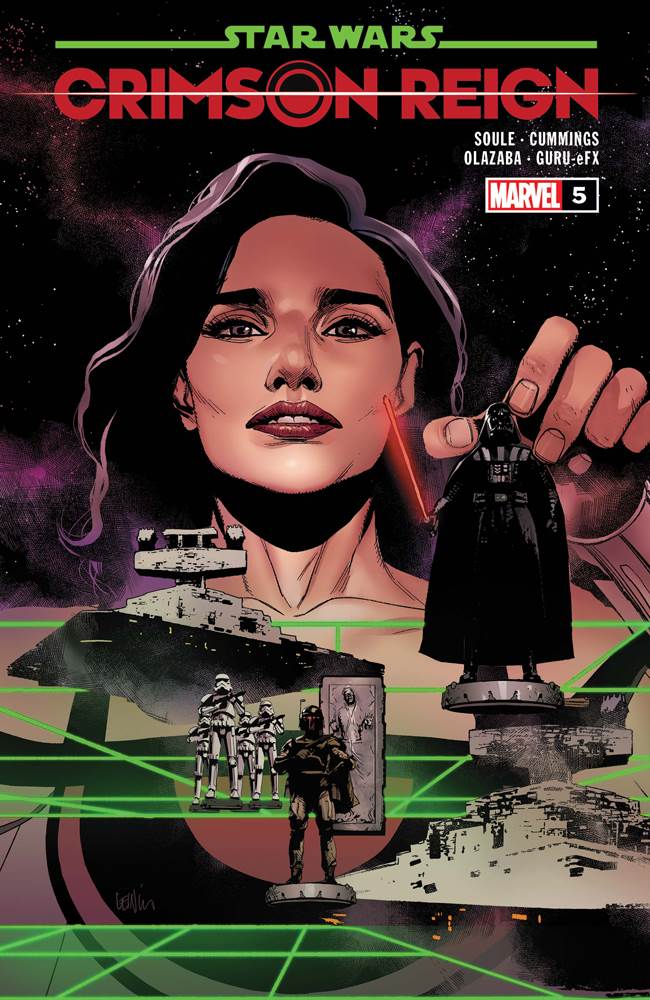 Crimson Reign #5 opens with Emperor Palpatine cluing Darth Vader in on who is actually behind many of the recent major events in this period set between The Empire Strikes Back and Return of the Jedi: the crime syndicate known as Crimson Dawn, with Han Solo’s ex-girlfriend Qi’ra acting as its leader after the death of Maul. 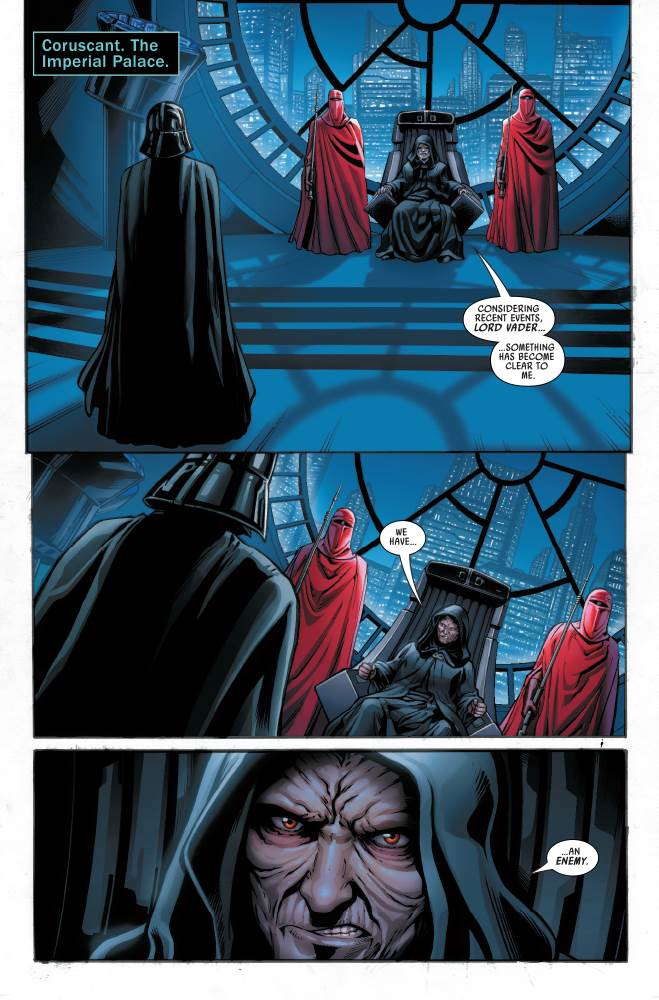 We’re introduced to a shadowy new Imperial intelligence character named Director Barsha (I have to wonder why Soule and artist Steven Cummings have chosen to keep his face concealed for now), who lays out the information for Palpy and Vader. Then we cut to Crimson Dawn’s flagship the Vermillion, where Lady Qi’ra has a conversation with young Cadeliah– the heir to the Unbroken Clan and Mourner’s Wail syndicates, as seen in Star Wars: Bounty Hunters. I do really like that Cadeliah is evidently going to mean something more than what we’ve already seen, but what exactly that is isn’t revealed quite yet, as instead Qi’ra sends the Archivist and the Knights of Ren to a mysterious, ancient “dark side hellscape” where they’re to use the Screaming Key stolen from Vader’s Castle in the previous issue. The two Sith Lords also figure out that Qi’ra was trained in combat by Maul, and they send out a high alert to the Imperial military, making Crimson Dawn and its underlings their primary target. 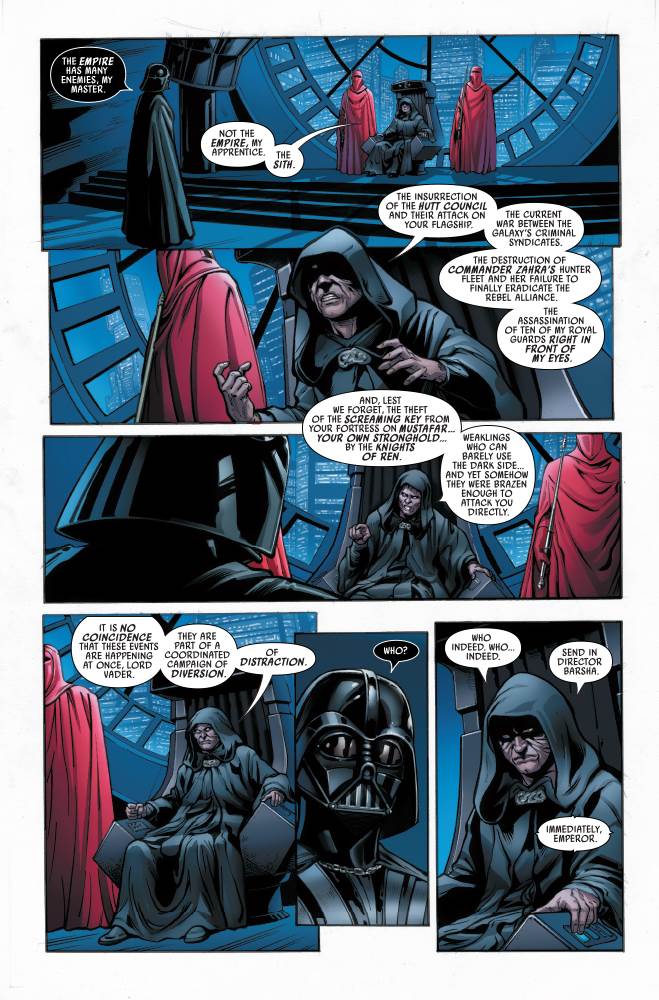 After evading some kind of giant mud-monster creatures, the Archivist’s mission concludes with her finding a strange floating hourglass bathed in red light– seems like Qi’ra is quite interested in this artifact, but not enough to maintain contact with her trusty subordinate. Qi’ra vows to sow chaos around the galaxy by activating her many sleeper agents, and Soule successfully sets us up for Star Wars: The Hidden Empire (part 3 of the trilogy), due out this October. I thought this was a fantastic issue on its own, and a really terrific way to conclude Crimson Reign overall. I really enjoyed the interplay between Vader and Palpatine, and I liked getting a little bit more of a peek at what Qi’ra has up her sleeve for the future. The secretive location visited by the Archivist and the Knights of Ren was particularly haunting in its imagery, and I find myself incredibly intrigued by what that hourglass might mean for Crimson Dawn going forward. Obviously the organization can’t still be around at its peak (or can it?) during Return of the Jedi, so I’m very curious to find out how the Imperial forces mop up this mess when The Hidden Empire arrives this fall. 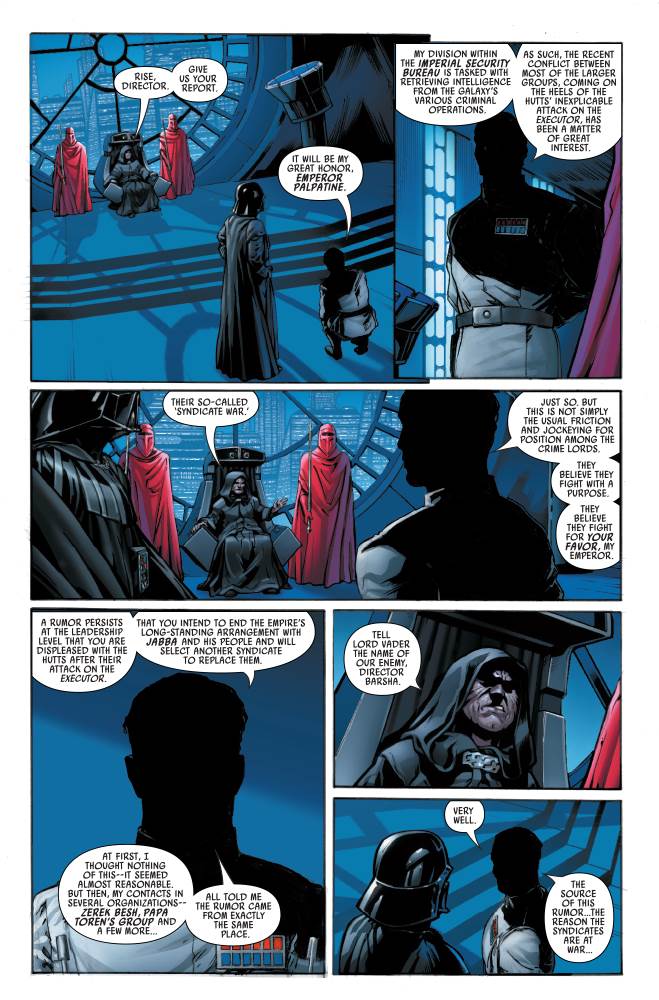