Nowadays in the Marvel Cinematic Universe, stories rarely turn out how we expect. The onset of the Multiverse has shattered our ability to trust what we see, and therefore we never quite know what to believe. This environment of uncertainty is primed for deliberate misdirection, and Marvel’s creators are up to the task. The MCU is stocked with plenty of deliciously deceptive red herrings, hidden in plain sight for the sole purpose of throwing us off the trail. 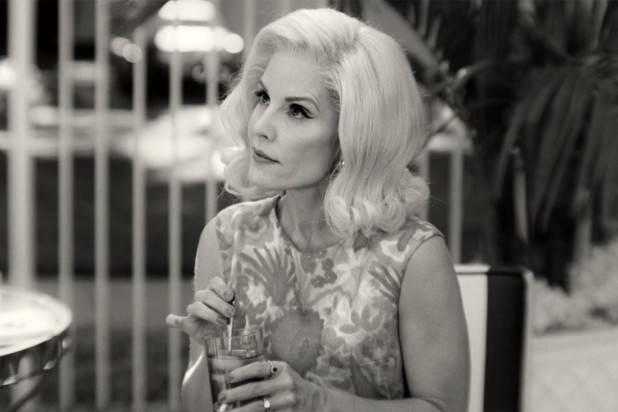 The red herring is a classic plot device commonly used in books, film, and television to mislead or distract the audience from the larger question or mystery at hand. They have always been staples in the mystery, thriller, and horror genres, and now they are increasingly used in the MCU as well. Let’s check out a handful of the trickiest in the universe.

The grizzled look and menacing glare of the Mandarin puts fear into the hearts of citizens around the world. And the attack that nearly killed Happy Hogan – Tony Stark’s trusted friend and security head – sent Tony on a mission for revenge. But none of it was real. “The Mandarin” was nothing more than a doped-up, out-of-work British actor named Trevor Slattery, paid in lifestyle perks to act as a head of a deadly terrorist organization. 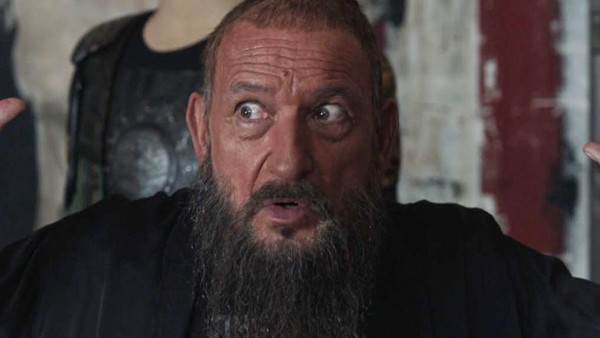 The real brains behind these terror threats (and Slattery’s red herring antics) was Aldrich Killian, a disabled scientist looking to leverage Stark’s wealth and technology to advance his own ambitions of curing his disability. Iron Man 3 may not be the best film in the MCU, but Ben Kingsley’s performance as the substance abusing opportunist is definitely a high point.

Kingsley’s turn as Slattery was so entertaining that he made follow-up appearances in the Marvel short film All Hail the King, as well as Shang-Chi and the Legend of the Ten Rings.

Trust can be a fleeting virtue – desperately needed, yet so hard to find. Despite all their squabbles, Thor honestly loves his brother Loki. And deep down, Loki sometimes cares for Thor too. But in between those rare moments of family bonding, the God of Mischief (played charmingly by Tom Hiddleston) serves up a cold plate of deceit to Thor over and over again. And the God of Thunder falls for the red herring of his brother’s honesty. Over and over (and over) again. 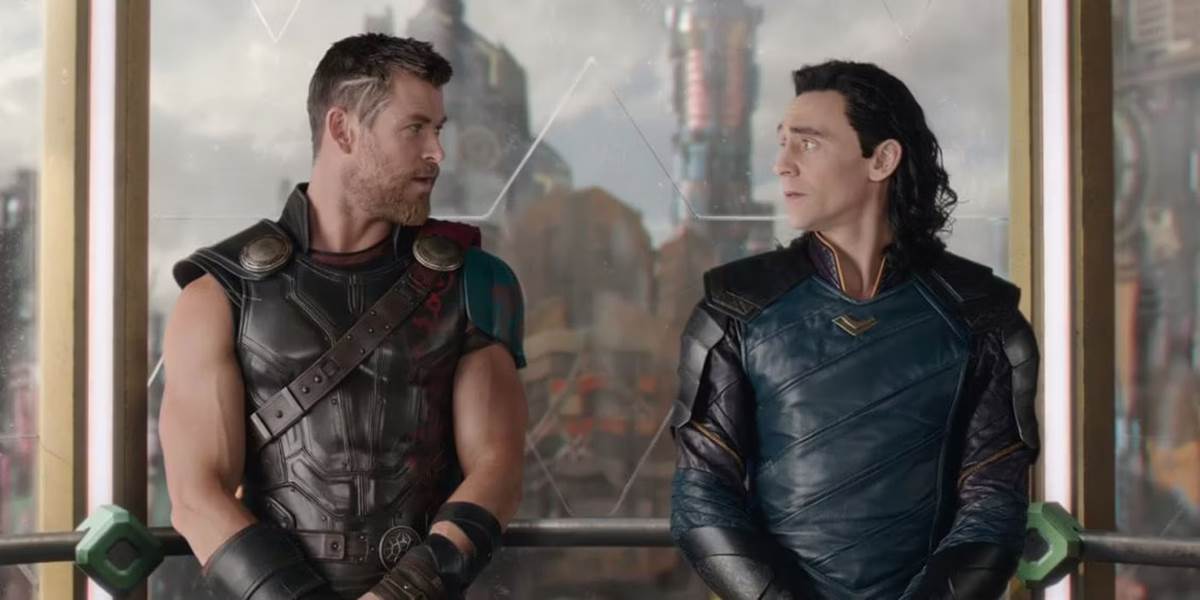 On Thor’s coronation day on Asgard, Loki secretly assisted the enemy Frost Giants in an attack on their father Odin’s vault, stealing the God of Thunder’s…well…thunder.  Immediately after, Loki facilitated Thor’s counterattack on the Frost Giants’ home world of Jotunheim, knowing it would anger their father Odin (to the point of banishing Thor from Asgard). While leading the charge in New York as the big bad in The Avengers, Loki again tricked Thor by phasing an image of himself in a holding cell on the Avengers’ helicarrier. His false image lured Thor into entering the cell, after which Loki trapped his brother and jettisoned him from the ship.

On the lighter side, Loki was famously caught by his brother impersonating Odin (and glorifying his own triumphs) during Thor’s time away from Asgard at the beginning of Thor: Ragnarok. And who could forget the snake story, which Thor bitterly recounted to Bruce Banner, much to Loki’s delight.

There are even more of Loki’s deliciously deceitful moments, but these take the crown as his best. He’s not called the God of Mischief for being honest!

Similar to Tom Hiddleston as Loki, Jake Gyllenhaal’s turn as Quentin Beck (Mysterio) in Spider-Man: Far From Home was dripping with charisma. It is exactly this charm that lures Nick Fury and Peter Parker into trusting Beck and following his lead.  When Beck claims to have entered earth from an alternate reality within the Multiverse, Peter and Fury plan to assist him in his fight against the Elementals. It’s only when the Elementals prove to be illusions, that Peter smells the fish. Beck/Mysterio turns out to be a complete fraud, bent on revenge after being cast off as a former employee of Stark Industries. 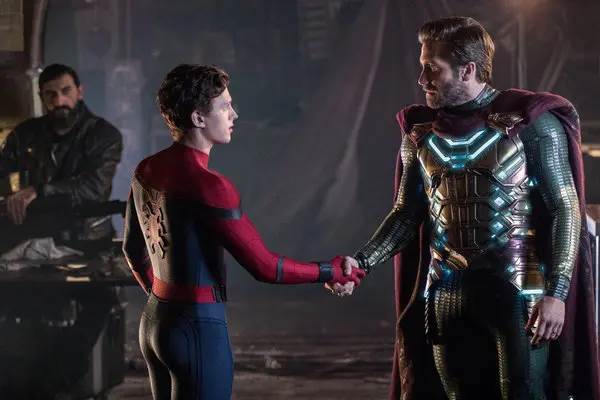 Fun fact: another former Stark employee, who returns in this film to assist Beck in his illusionary scheme, is Peter Billingsley. Do you recognize the name? The yuletide legend appeared in Iron Man as well.

Skrulls – the shapeshifting alien race – have a long history of causing problems for Earth’s mightiest heroes in the comics. Therefore, it was only natural for viewers of the Captain Marvel film trailer to expect Skrull villains in the film. Knowing this association ahead of time, Marvel’s film marketers cultivated this red herring in the trailers (particularly when Carol Danvers punches an old lady in the face, and the senior proves to have been a Skrull). 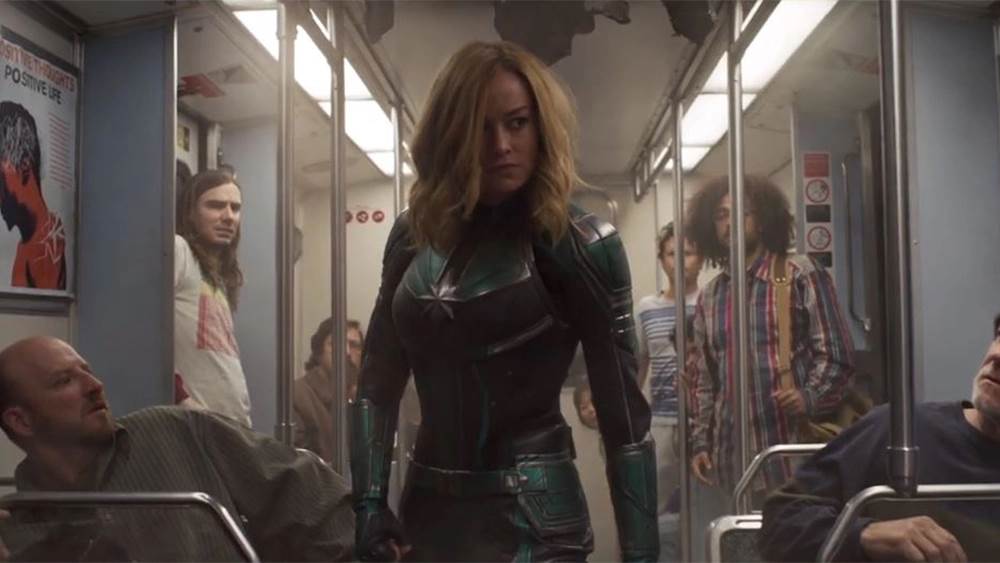 This setup threw audiences for a loop when the film was released. The Kree – a different alien race – were the true villains, and the Skrulls were simply misunderstood refugees looking for a new home. But much like Loki – when a person (or people) make a practice of acting in deceitful ways, a certain amount of distrust should be expected.

Ok, maybe WandaVision should have been subtitled “Fooled You Again!”, because the hit television series was overflowing with red herrings. The pop culture phenomenon was the first series in the new generation of Marvel shows crafted specifically for Disney+, and it had social media users spinning themselves into a frenzy.

The early trail smelled a lot like Dottie, the town’s power skeptical mom who ruled the neighborhood with an iron fist. The awkward moments, ominous tones, and frozen stare was clearly saying “I’m bad news”, but in the end she turned out to be a prisoner in her own mind, just like the rest of Westview’s residents.

The diehard comic fans in the room kept bracing for the villain Mephisto to make a long-awaited appearance in the MCU. Fans stitched together far-fetched theories heralding the entrance of the devil, using plot pieces like a rabbit named Senor Scratchy, a cicada on the curtain, a pattern in the wallpaper on one of the show posters, and even theorizing that the hapless S.W.O.R.D. Director Hayward could be the devil in disguise. In the end, Mephisto never came. But Agatha (and her snarky devilish comments) did. 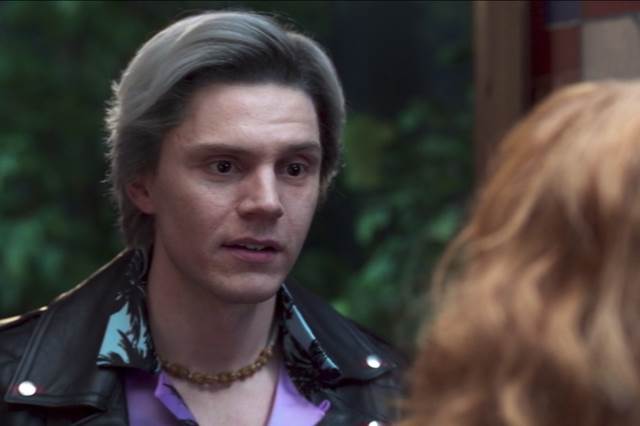 For all the theorizing that surrounded Mephisto, the single biggest hering dropped in WandaVision was the appearance of Wanda’s deceased brother Pietro, also known as Quicksilver in Avengers: Age of Ultron. But this wasn’t just a brother coming back to life. The Pietro who returned was the 20th Century Fox/X-Men/Evan Peters version of Quicksilver. Fan theories ran rampant once again, predicting that Pietro’s appearance was the first step into marrying the Fox X-Men universe with the Disney Marvel MCU. Alas, Pietro ended up being towns person Ralph Boner – just another pawn in Agatha’s witchy chess game (with a terrible name to boot). Well played Marvel. You took us all for fools and led us around in circles smelling seafood.

Always with Loki, it boils down to issues of trust. As we discussed, Loki – God of Mischief – spent much of his life double-crossing his brother Thor. But when Loki is arrested by the Time Variance Authority, he learns the hard way how difficult it is to overcome a lack of truth. Loki manages to convince Agent Mobius of the fact that the TVA was balancing lie upon lie. When Loki and Sylvie escape their bonds and attempt to destroy the revered Time-Keepers, they learn that the Time-Keepers themselves are simple androids, not capable of any original thought.

These tin men proved to be nothing more than cosmic versions of The Wizard of Oz. The real villain in this series proved to be He Who Remains. And He Who Remains remains at-large (expected to be seen next in the upcoming film Ant-Man and the Wasp: Quantumania).

Smarmy to the max, this hopeless romantic easily won the trust and affection of Eleanor Bishop. But Eleanor’s daughter Kate was not so easily smitten (neither was Clint Barton for that matter). Jack’s shady family members and his appetite for high society’s seedy underside make him an obvious candidate for being a bad guy. 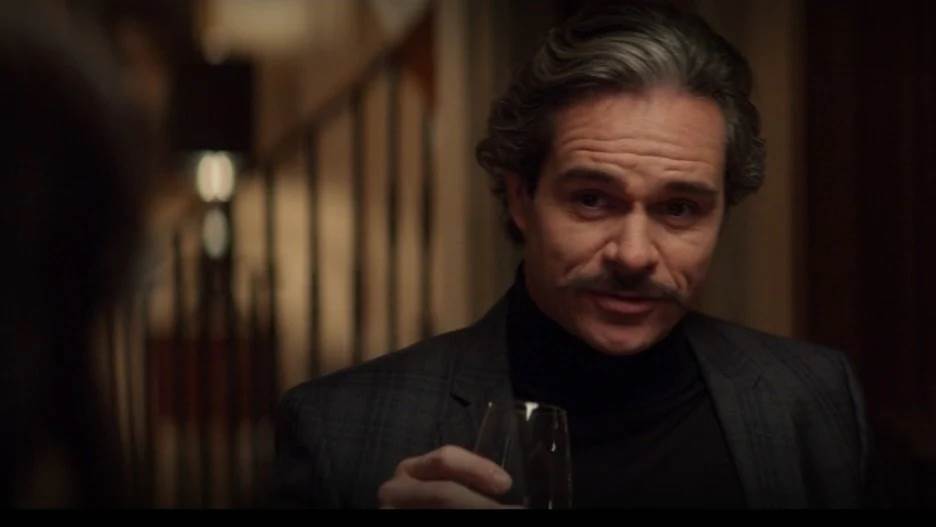 Jack may not be completely virtuous, but in the end he wasn’t guilty of anything except loving the wrong lady. It was Eleanor who deceived Jack – sort of a reverse red herring that sent him temporarily to jail. Jack was quickly proven innocent, and chose the correct side of the fight by the end of the series. His sword fighting skills rewarded him with an invite to join the New York City Live Action Role Players (NYC LARPers). How about that for high society?

When that booming voice shouts down from the sky, Stephen Grant’s first reaction is to be terrified. This is completely understandable, since Stephen woke up having no idea where he was, or who was yelling at him. Stephen’s followup vision of the ominous gigantic fossilized bird of prey only serves to reinforce his fears – and the audience’s suspicions – that Khonshu is a bad dude. But the Egyptian moon god is not the villain in this series – he’s more like an anti-hero. Khonshu uses the body and mind of Stephen (and his alter egos Marc Spector and Jake Lockley) to fight his neverending battle against the Egyptian goddess Ammit and her Earthly associate Arthur Harrow (played to creepy perfection by Ethan Hawke).

Some of the most effective red herrings are introduced well before the film begins. Marvel’s content marketing team has a history of editing the trailers significantly, so as not to give away any revealing spoiler information. In fact, Marvel often goes a step further to deliberately mislead audiences down the wrong path, sometimes even including a moment that doesn’t actually occur in the film.

Do you remember the Hulk fighting in the giant Wakanda battle scene at the end of Avengers: Infinity War? If you missed him, don’t feel too bad. It’s because he wasn’t there. Bruce Banner participated in the fight, using Tony Stark’s Hulkbuster armor. But the shot of Hulk going to battle in the film’s trailer never came to be.

Let’s talk about Spider-Man: Homecoming.  Were you expecting to see Iron Man flying (and maybe fighting) alongside Spider-Man? The trailer showed the two heroes together tracking the New York skyline. Both were in the film – together at times – but none of the joint scenes added much intrigue to enhance the trailer. So a separate trailer-only moment was created, showing the two streaking to battle in the skies of the Queens neighborhood. 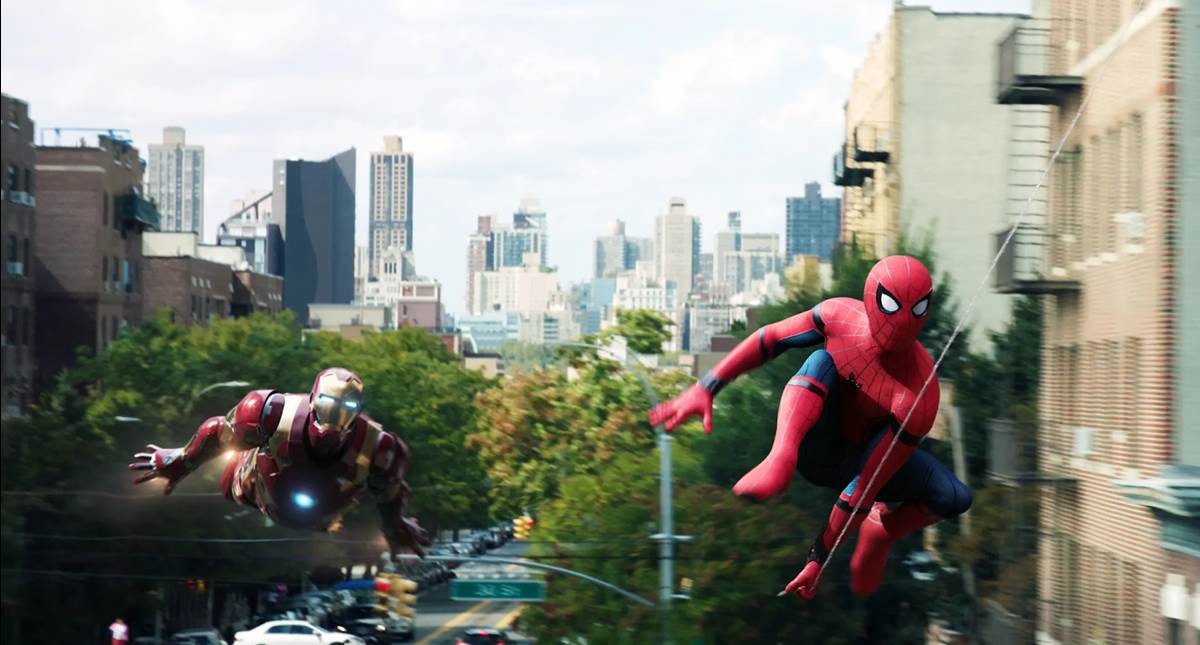 Lastly, let’s add up the prison time of those riotous Guardians of the Galaxy. The famous trailer and posters for the film display the five unlikely teammates being subjected to a joint session of prison lineup mugshots (who could forget Peter Quill slowly and deliberately unreeling his middle finger?). This moment suggests that the five were logged into the Kyln prison at the same time, when in fact, only four went to the brig together. They collectively meet Drax – their soon-to-be fifth member – during their time behind bars. Either way, the five unite upon breakout, and the rest is a rockin’ party!

If there’s one thing fans have learned from the MCU, it’s to expect the unexpected, and not to trust what you see. So keep your radar alert the next time you check out a Marvel film. You just may sniff out the fish before you get hooked.