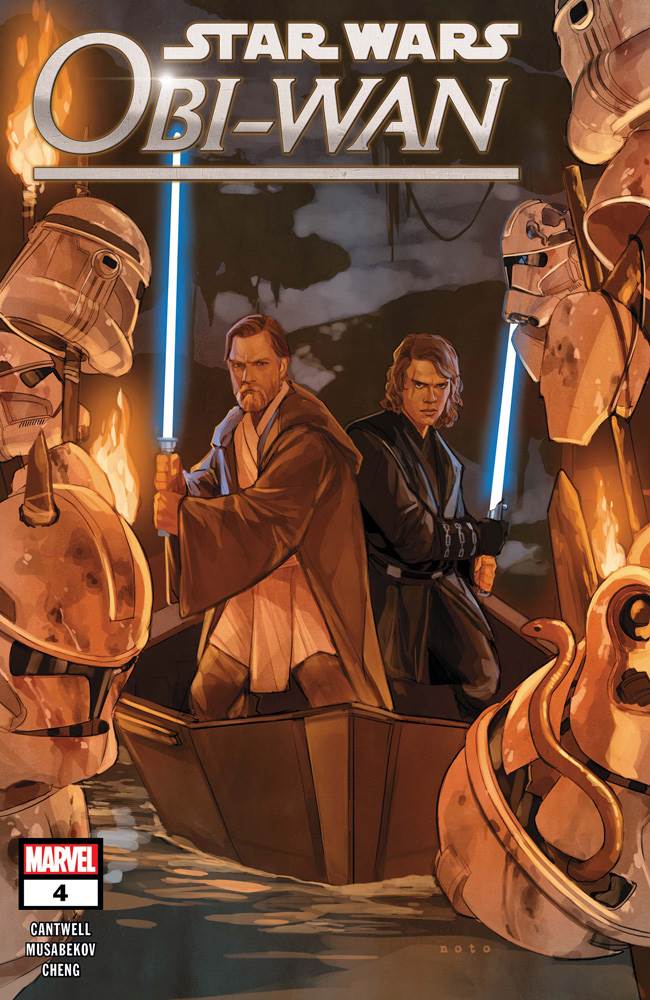 And now writer Christopher Cantwell has chosen to plumb the same material for an issue of the current Star Wars: Obi-Wan miniseries from Marvel Comics. It’s not necessarily a bad decision, but it does feel like it’s been done already, even in this universe… on the other hand, how many times has Star Wars done The Seven Samurai at this point? 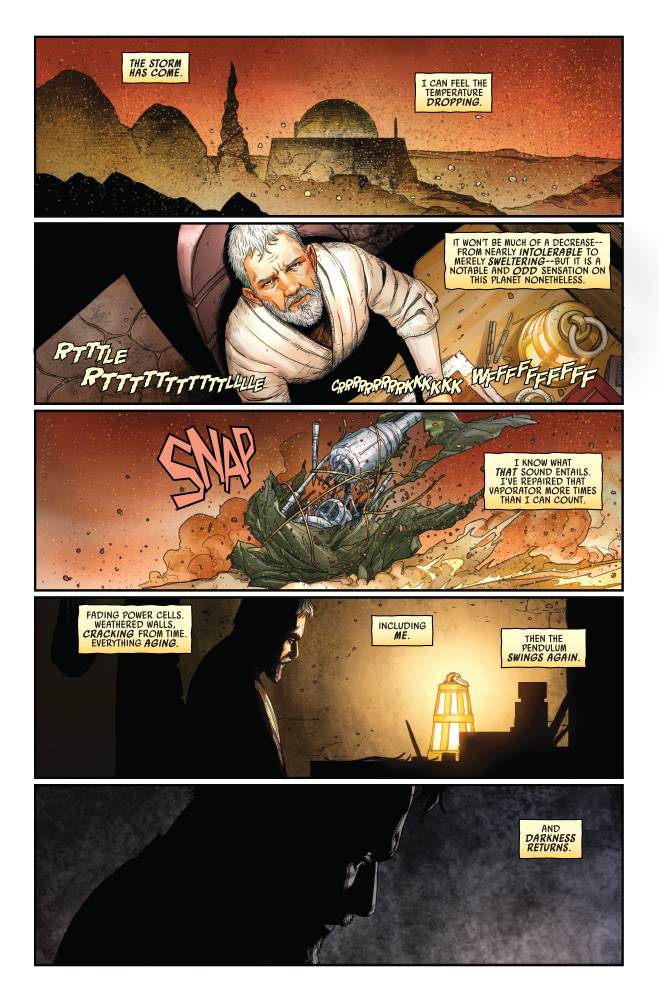 Obi-Wan #4 once again begins by continuing the bookends of Old Ben Kenobi waiting for a sandstorm to pass by his hut in the Jundland Wastes on the planet Tatooine. Then, as Ben continues to write his memories down in his journal (the one Luke Skywalker will later take possession of in the Star Wars comics timeline), we flash back to the Clone Wars era. Obi-Wan and his protege Anakin Skywalker are called in to an unusually secretive meeting with Admiral Yularen of the Republic. Yularen informs the two Jedi Knights that a rogue Commander named Mekedrix (this story’s stand-in for Hearts of Darkness’s Kurtz) has been murdering combatants on both sides of the war. Obi-Wan remembers Mekedrix from the events depicted in the previous issue, namely the particularly destructive Battle of Abrion Bridge, and it is assumed that the Commander’s trauma from that incident caused him to lose control. The Jedi are sent to Ando (not to be confused with Andor, this formerly Legends-only planet was also mentioned in the Star Wars Tarkin novel) to track down Mekedrix and his men before they can do more damage. 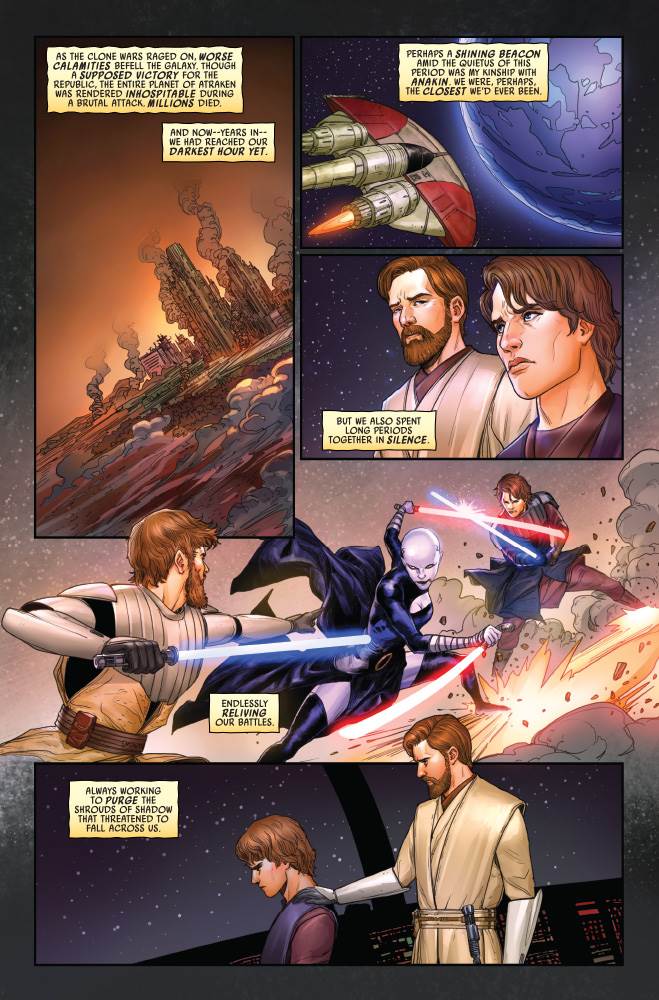 The remained of this issue concerns Obi-Wan and Anakin literally going up-river, Martin Sheen-style, until they come across Mekedrix’s hideout in a creepy abandoned Sith temple on Ando. Here, Mekedrix is introduced in a way that yet again pays homage to Marlon Brando’s Colonel Kurtz, and there’s a brief conversation about the “horrors” (yes, that word is dropped) of war before the Jedi are forced to take action against the unstable military Commander. Obviously this narrative is all too familiar, which definitely isn’t to say it’s interpreted poorly. I absolutely enjoyed seeing Skywalker and Kenobi play these roles, and this turn of events makes perfect sense as a follow-up to what we saw last month in Obi-Wan #3. I just think the nearly 125-year-old source material has already been exhaustively tapped, as far as literary pastiche is concerned. Still, Cantwell does a good enough job of plugging these characters into this situation, and the art by illustrator Madibek Musabekov with colorist Sebastian Cheng is appropriately evocative and moody. Not to mention the fact that this is just one individual installment in a five-issue miniseries, the conclusion of which will be released in September. I enjoyed #4 on the whole, but I’m crossing my fingers that the wrap-up to Obi-Wan’s story in this comic feels just a little more original. 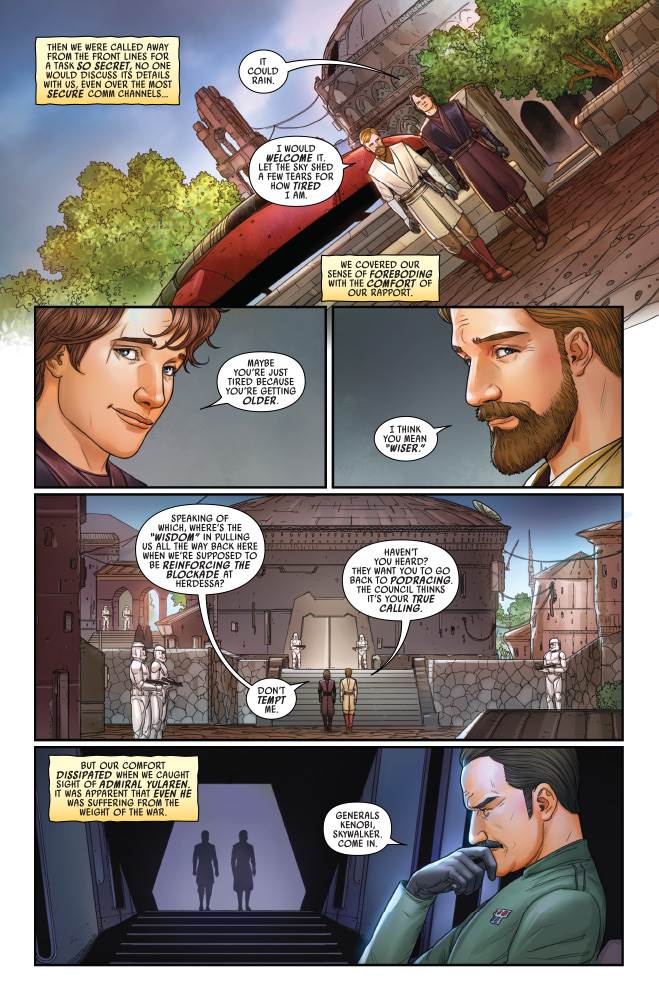