Hi-Diddly-Ho, Fanerinos! The creative team from The Simpsons took a break from Springfield to visit the D23 Expo, teasing some of what’s to come in Season 34, announcing when Season 33 will come to Disney+, and putting to rest questions about a second movie (kind of). Moderated by Yeardley Smith, the voice of Lisa Simpson, the event kicked off with a big-screen showing of Welcome to the Club, the new Disney+ Day short. Al Jean (showrunner, executive producer) was the first to slip into the mind of Comic Book Guy to point out that Cruella De Vil doesn’t have flame-throwing powers, as depicted in the short. We learned that Kathy Zielinski animated Ursula in the short, a reunion of sorts as she worked on the “Poor Unfortunate Souls” sequence in The Little Mermaid. Al mentioned that if they could’ve had Pat Carroll voice Ursula in the short, they would have, verbally dedicating the short in her honor.

This was the first time Yeardly Smith had seen Matt Groening in three years, confessing that she had a hard time letting go of their reunion hug backstage before the panel. The creator of The Simpsons revealed that they’re still doing all of their meetings on Zoom, sharing that they had a virtual table read for the 750th episode a few days ago. “I get to watch the show as a fan,” he shared about the fact that he’s not in every story meeting, in large part because he is also at work on the revival of Futurama (for Hulu) and a new season of Disenchantment (for Netflix). He joked about secretly taking days off by telling all three shows he’s busy working on the others.

We got some Season 34 news from Matt Selman (showrunner, writer, executive producer), who revealed that in addition to a traditional 3-short “Treehouse of Horror” episode, there will be another Halloween episode starring Krusty the Clown in a parody of Stephen King’s It (Matt Groening also reminisced about being in a band with King, Rock Bottom Remainders). There will be two new episodes centered around secondary characters. The first is about Kirk Van Houten, written by Michael Price. The other is about Carl Carlson learning about his birth parents with special guest star Henry Louis Gates, Jr. Oh yeah, and Al Brooks will be guest starring this season for his ninth appearance on the show (not counting his cameo in The Simpsons Movie). 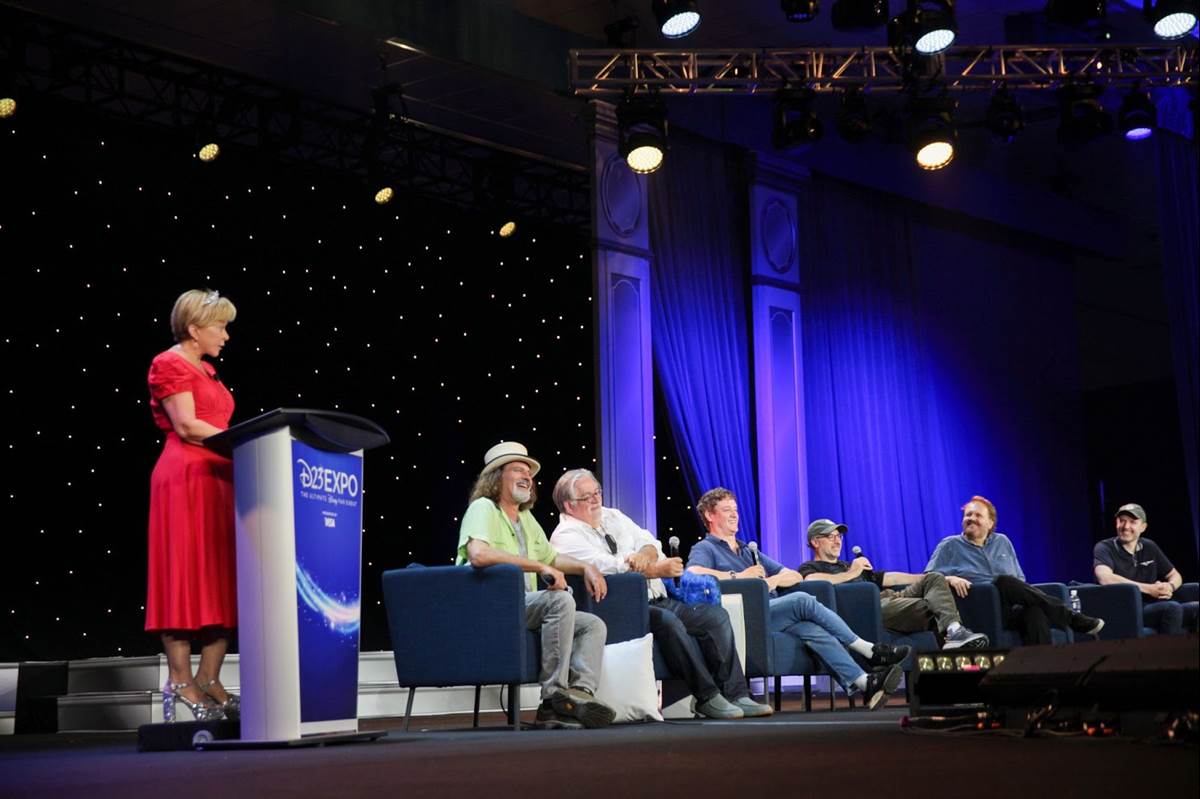 Another Season 34 reveal came from Tim Long (writer, executive producer), who has been writing a lot of songs for The Simpsons with Bret McKenzie (Flight of the Concords, The Muppets). Lizzo reached out to the team to express her interest in guest starring and unbeknownst to them, she is also a fan of Flight of the Concords. Lizzo will be a guest star this season, playing one of Maggie’s Happy Little Elves toys that comes to life. When she met Bret, she sang “Got It Going On” to him, surprising him with her knowledge of his music. That episode, by the way, takes place entirely in Homer’s mind during a split-second when he is thrown through the windshield of his car.

Rob LaZebnik (writer, executive producer) was recently profiled in an article in The New Yorker alongside his son, who co-wrote the Season 33 episode "Portrait of a Lackey on Fire." He shared his excitement for Season 34 premiere, titled “Habeus Tortoise.” The premise was inspired by the true-crime Netflix documentary Don't F**k with Cats: Hunting an Internet Killer. In the episode, Homer finds himself belonging to an internet group of conspiracy theorists when his favorite animal at the Springfield Zoo vanishes. He also noted that while most of the conspiracy theories are jokes, there is one legitimate bold prediction in the episode that they believe will become yet another “Simpsons predict the future” moment.

While all of this was happening, David Silverman (consulting producer, specials/shorts director) was broadcasting his tablet screen for the audience to see. Yeardly Smith gave him a secret word at the beginning and asked him to make a drawing out of it with a character of his choice. The word was “hang glider,” and he chose Mr. Burns because he’s the most aerodynamic character. It went over so well that he was asked to do another, this one with an audience shout-out – “tuba.” Homer was the musician in this masterpiece, with Plopper stuck in the bell. A joke was made about this being Disney’s Spider-Pig, not Sony’s version. And lastly, Yeardly asked David to do a caricature of her, which ended up looking exactly like Lisa Simpson. Matt Groening credited David with having come up with the animation rules for each character back when they were making shorts for The Tracey Ullman Show. 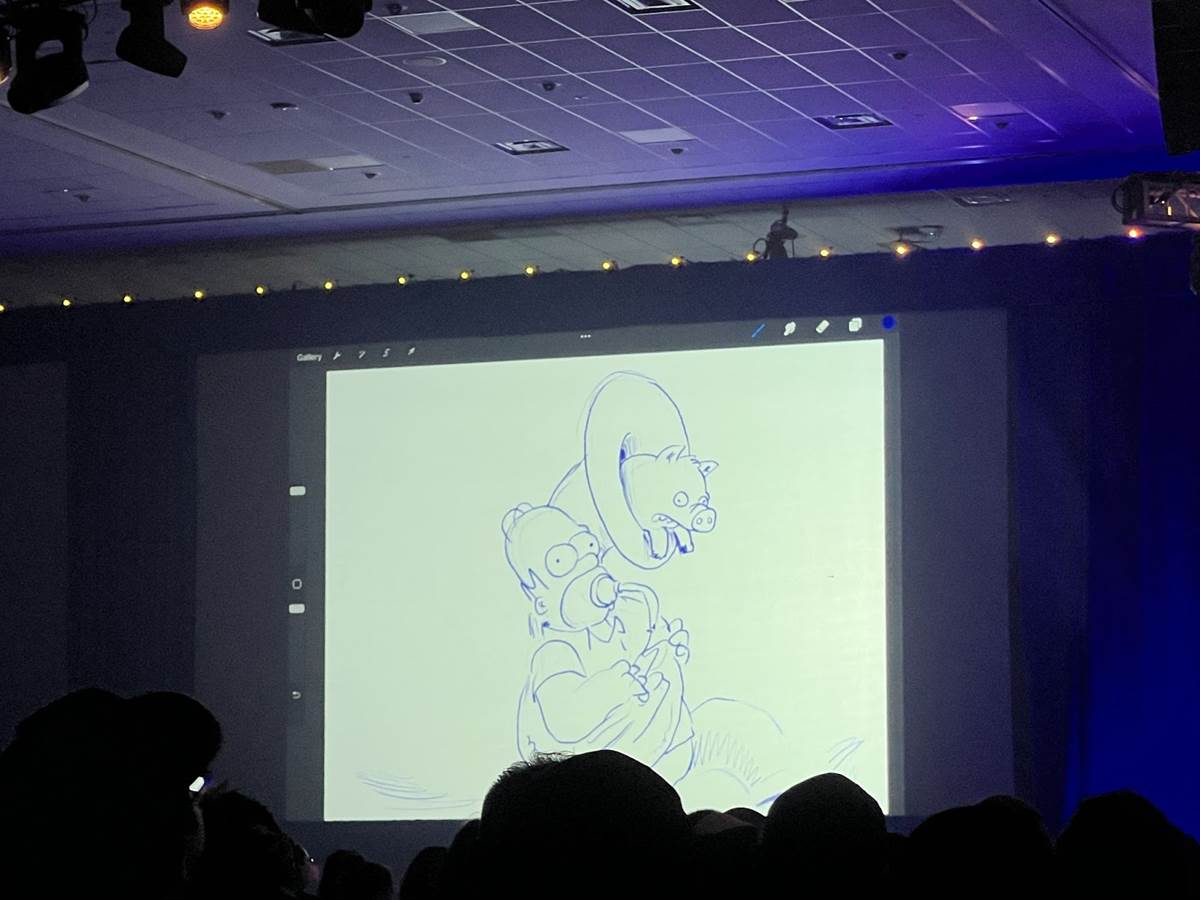 A “big surprise” was promised in the panel’s description. For the first time ever, Homer Simpson answered some (planted) audience questions. When asked about future Disney crossover episodes, Homer’s answer was interrupted by Winnie the Pooh, who claimed that Homer snuck into Pooh Corner and stole his honey. Pooh Bear reappeared in the response to the second question about new romances on the show when, after Homer was unable to auction off Springfield’s most eligible bachelors to the crowd (Moe, Professor Frink, Comic Book Shop Guy), Patty walked by arm-in-arm with Winnie the Pooh. With Disney’s 100th anniversary kicking off next year, a recruited audience member asked Homer if there would be any nods to classic animation techniques. Homer shared that they did the best with what they could afford on Disney’s budget, introducing a clip from Steamboat Willie with Bart’s head covering Mickey’s (it was The Tracey Ullman Show version of Bart). 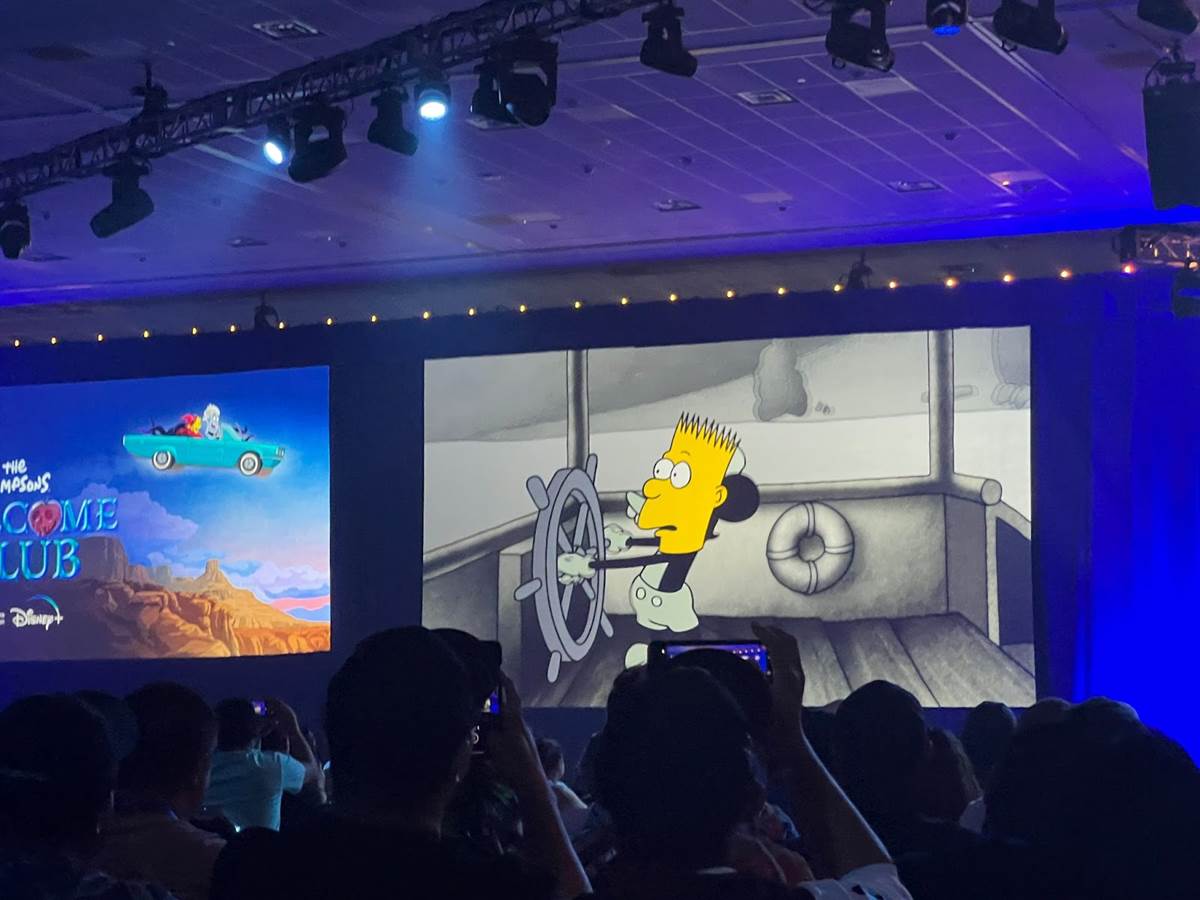 Lastly, Homer was asked if there will be a sequel to The Simpsons Movie. He stood up and unveiled plans for a Springfield Cinematic Universe, which will start with Phase 5 because that number sounded good. Titles include “Iron Moe,” “Sea Captain America,” “Selma-Vision,” “Groundskeepers of the Galaxy,” “Moon Knight,” and “Nedpool.” Mock-up posters for each title appeared on screen as they were announced. But in the end, the blue-haired lawyer appeared on behalf of The Walt Disney Company to shut these projects down. 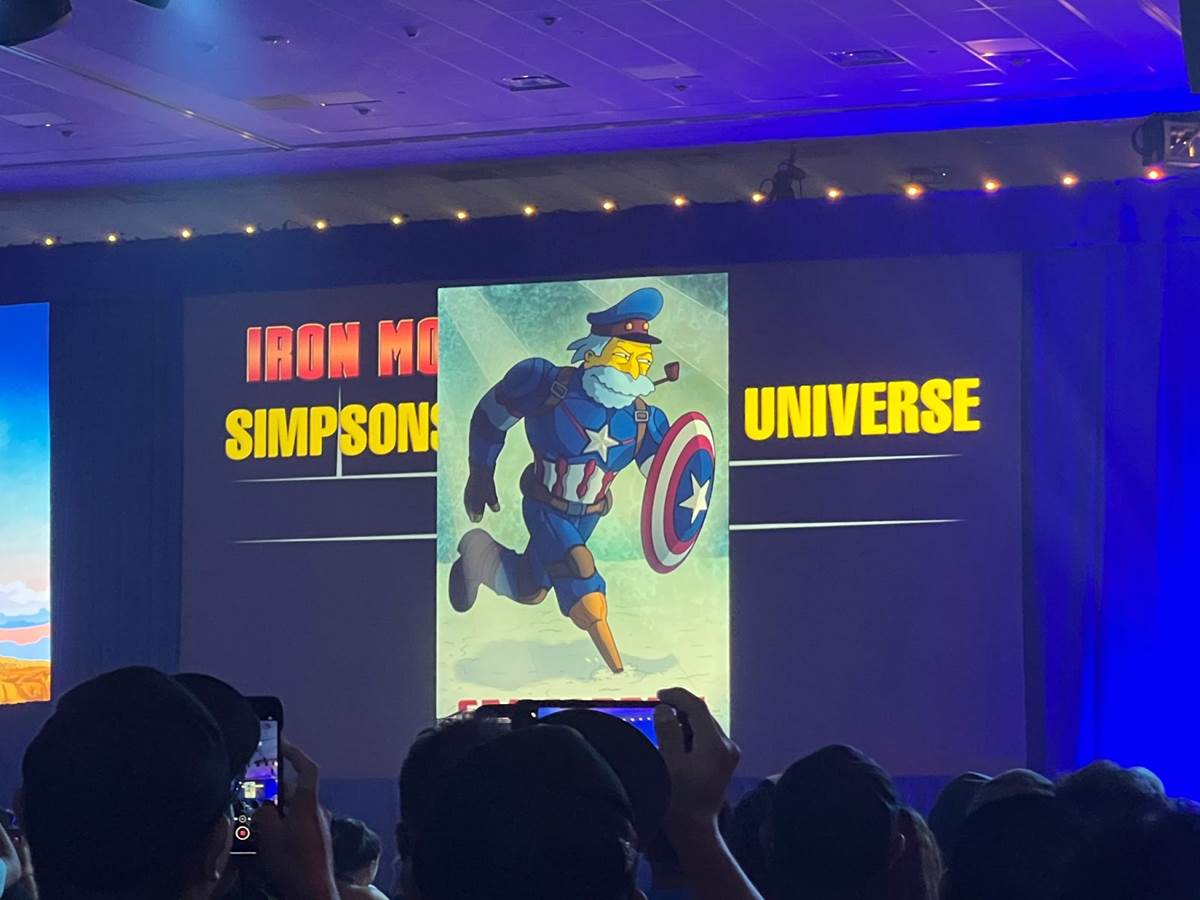 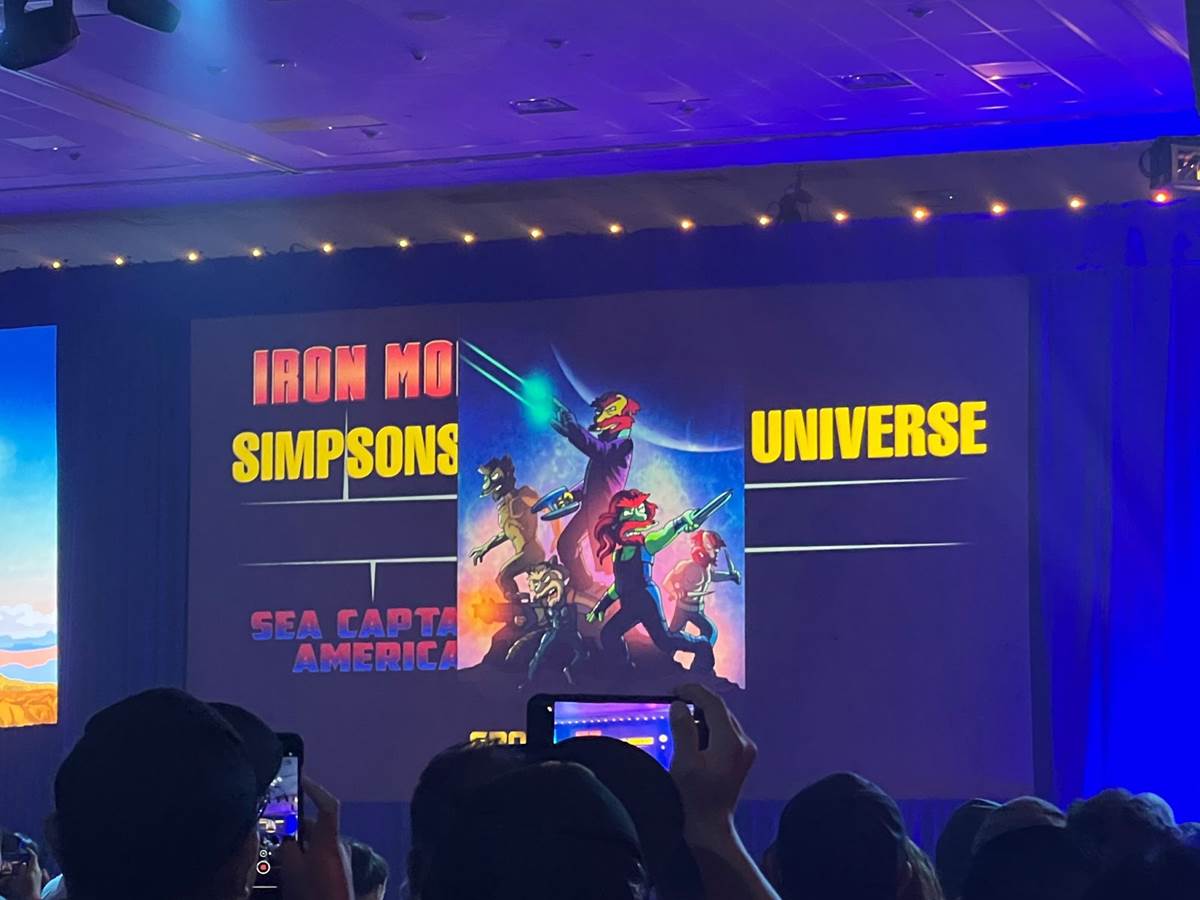 Season 33 of The Simpsons will join every other episode on Disney+ on October 5th. Season 34 premieres Sunday, September 25th at 8/7c on FOX.