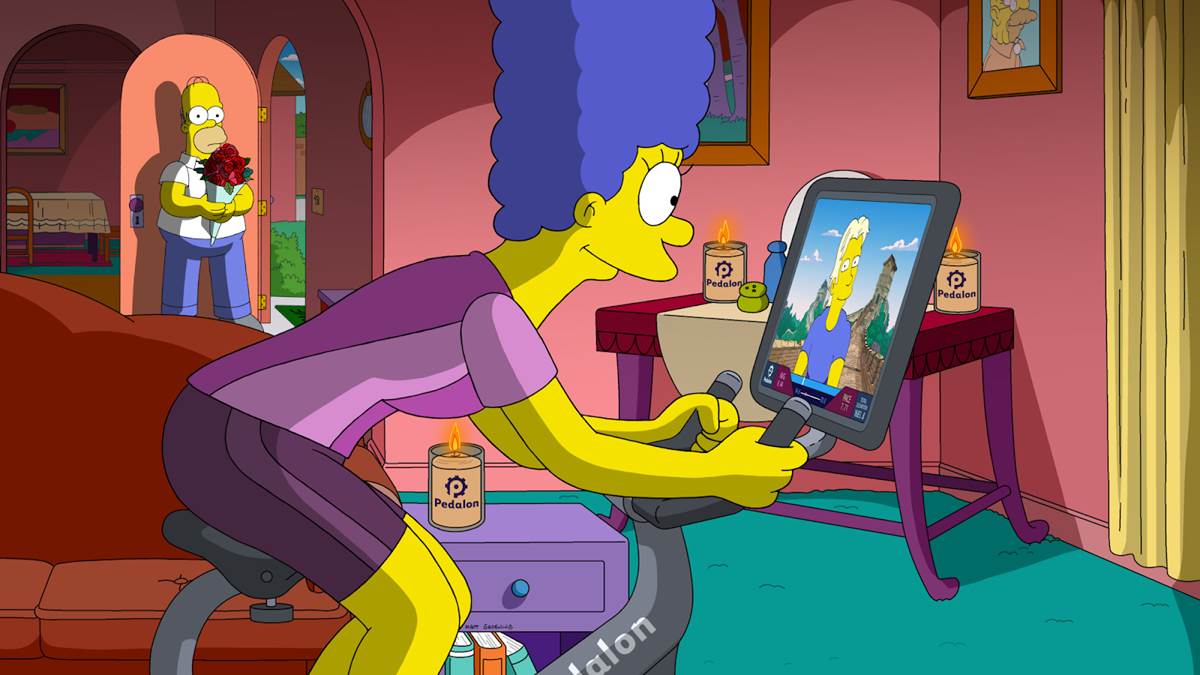 How many times has the marriage between Homer and Marge Simpson been threatened, either by an outside influence or (more often) Homer’s own stupidity, at this point? It’s probably the most frequently used go-to The Simpsons plotline, but considering its reliability as a source of drama and laughs over the past 30+ years, I suppose I’m not surprised that the show’s writers keep returning to that well.

This week’s new episode of The Simpsons, entitled “One Angry Lisa” (a riff on the title of the classic courtroom drama Twelve Angry Men), sees Marge (voiced by Julie Kavner) desperately wanting a Peloton– sorry, Pedalon (but you’ll forgive both me and Homer for making that mistake) exercise bike for her birthday. 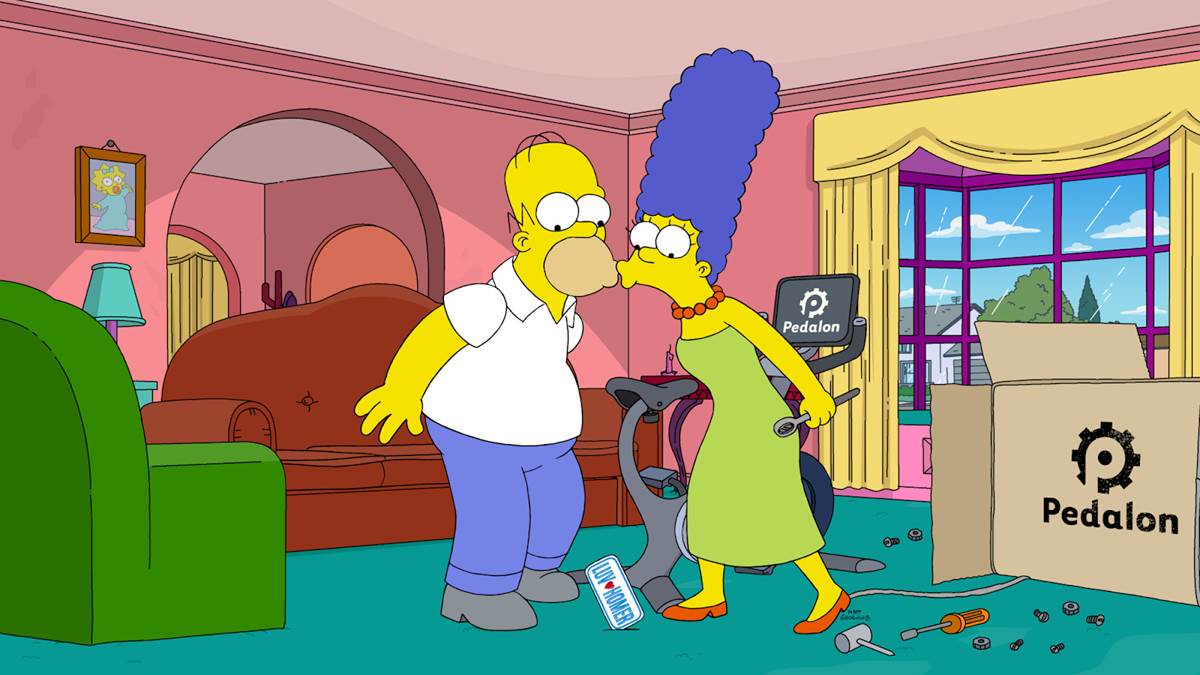 Homer (Dan Castellaneta) breaks down and eventually buys the bike, despite the increasingly absurd upcharge items that get tacked on to his purchase, and returns home to stealthily assemble it in the middle of the night. Of course this does not go quite as planned, as Homer ends up trapped within the structure of the bike he’s assembled, leading Bart (Nancy Cartwright) to steal his wallet and go to Itchy & Scratchy Land in his pajamas. Homer wakes up the next morning to find that Marge has put together the bicycle herself, but she’s very appreciative of his effort anyway. The only problem is that Marge quickly becomes addicted to the Pedalon, as she and the other participants swoon over the instructor (Hank Azaria) who leads the virtual class. Meanwhile, Lisa (Yeardley Smith) erroneously receives a jury summons and finds herself unable to get out of jury duty despite being a literal child. Kent Brockman (Harry Shearer) gets himself excused, but Lisa serves alongside Fat Tony (Joe Mantegna), Cletus (also Azaria), the Crazy Cat Lady (Tress MacNeille) and other ne'er-do-well residents of Springfield, which soon causes her to become disenchanted by the town’s judicial system. When Marge wakes up in the middle of the night from a dream about the Pedalon instructor– and even lights a candle that smells like his sweat– Homer retreats to Moe’s Tavern, where the other barflies have a similar bone to pick with the fitness teacher. This ultimately leads to Homer receiving the instructor’s home address, so he drives there to confront the man for monopolizing his wife’s time and money. Back in the courtroom, Lisa gets fed up and quits the jury, resulting in the judge calling a mistrial and letting the defendant off the hook (it’s rare that an episode’s B-story would get the honor of having the title named after it, but that’s the case here). At the Simpson home, Marge watches during a “private” Pedalon session as Homer appears on-screen and starts fighting with the instructor, so she ends up riding Lisa’s real-life bicycle over to the man’s house– there’s a great nod to The Simpsons’ famous opening-title sequence (complete with backwards theme music) along the way. Obviously it’s another happy ending for Homer and Marge, which feels a little trite as they ride off on Lisa’s bike together– echoing the conclusion of the season four episode “Duffless,” but without the direct musical reference to Butch Cassidy and the Sundance Kid. Overall “One Angry Lisa” didn’t really do it for me; I thought last week’s season premiere installment had a higher joke success-to-failure ratio and a stronger narrative on the whole. Unlike her jury summons, Lisa’s subplot felt disposable, and the bottom line is that I just feel like Homer and Marge’s marriage should be strong enough at this point that they wouldn’t keep falling into the same repetitive cycle of betrayal and forgiveness. 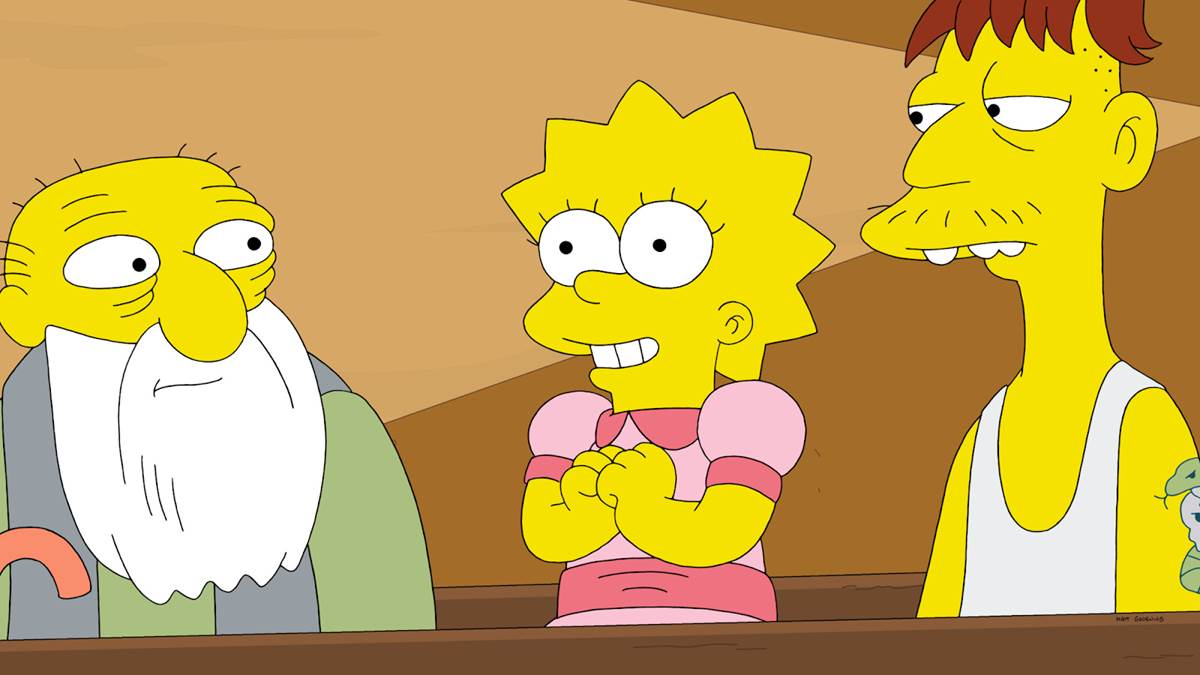