Big City Greens is still back home in the country where Tilly is approaching a big Green family milestone while Cricket learns there are no shortcuts to learning a skill. 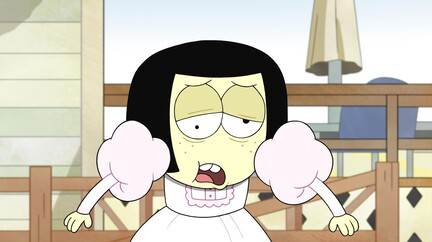 It’s Tilly’s coming of age ceremony – a Cornoration, and while Bill can barely keep his emotions straight as he watches his daughter grow up. Remy, again serving as surrogate audience member, is quick to point out that the family likely means “coronation”, not “cornoration.”

Gramma explains that it’s a time honored tradition for country girls (all while visual corn cobs are present in the scene) but it sure does sound like a coronation…Remy and Cricket are passively assigned to capture the whole event in pictures and video, giving us our B storyline for the episode.

Tilly is excited about the event, but her new ways of showing off her growth and maturity as a young woman aren’t exactly in line with the strict ceremony that Gramma has envisioned as part of the family traditions.

Under the guise of Cricket and Remy’s documentary-style filmmaking, we learn more about the traditions and their ancestor, Elisheba Green, and the family heirloom dress that every Green woman must wear, even though Tilly has a flashy new track suit she planned to wear. The tradition also states that each young woman must also shuck an ear of corn to show emergence, though Tilly thinks the idea of exploding popcorn and/or butterflies is a better metaphor.

As Tilly keeps sharing her ideas (including spoken word beat poetry), Gramma has had just about enough. She wants to keep the ceremony the same way it has been for generations. Gramma has a plan. Remember that ancestor? Gramma has decided to dress up like Elisheba Green to scare Tilly into upholding the strict traditions of the Cornoration. Too bad Tilly isn’t afraid of ghosts, she regularly communes with them, though it has been a while. After some of Gramma’s screaming as Elisheba, the plan does seem to work, and the next day at the ceremony we see some of the local Smalton residents that we’ve been introduced to gather around for the festivities.

Cricket and Remy are filming everything and setting up external lighting that is reflected with aluminum foil and casting high-intensity beams everywhere. Tilly comes forward in the traditional dress, despite how uncomfortable she is, and starts to shuck the corn. Nancy points out that this is nothing of what Tilly planned, and their daughter just makes her way through the ceremony in a monotone, bored manner. Gramma overhears everyone wondering where Tilly’s ideas were, including the metaphorical butterflies and popcorn. She finally erupts into a tirade where Tilly’s plans were shut down because the ceremony is about falling in line, not doing whatever the girl wants to do, like when she wanted to have a boxing match at her own ceremony when she was young—- oh there it is. As she is screaming and telling everyone to look at her granddaughter, she looks at Tilly herself and sees a sad bored child whom she loves. Finally, she lets her do what she wants to do and tells her how proud of her she is. Fortunately, Cricket and Remy’s lighting allows Tilly to start throwing corn cobs and filling the ceremony with the popcorn and butterflies she wanted in the first place.

The sheep rodeo is in town and even though it's sheep instead of bulls, it’s still pretty exciting. The star of the show? Raging Wool, a buffed up sheep that is bucking children off of his back. Of course, this looks pretty awesome to Cricket, who is ready to sign up for a go. Too bad Cricket has no experience in a sheep rodeo, or “Mutton Bustin’’ as Gramma calls it. The problem is that this skill takes years of practice– Cricket doesn’t have that kind of time, he wants to take on Raging Wool NOW!

Remy jokingly suggests a montage, like in a movie, where someone can learn a lifetime of lessons in a matter of a few minutes. Too bad montages aren’t really real, but Cricket points out that nobody has ever tried learning by montage in reality before. Starting in a playground, Remy cues up some montage music while Cricket runs through the playground with sheep, and is ready to ride Raging Wool. Once there, he is bucked off and into a wall immediately. He realizes that this is likely because he only did the first part of the montage, where he struggles. He never fully montaged and perfected the skill. We see a more perfected montage as opposed to just a lap around the playground, but he gets caught in a never-ending montage loop. In order to figure out why he is stuck in a montage, he needs to learn science real quick, and sets up another montage. Cricket and friends are now stuck in a science montage a loop, and decide that maybe their brains need a rest, cueing up a “fun” montage. In this montage, Cricket gets into a bit of trouble on the beach, where he ends up getting in a fight with a bully. Too bad Cricket doesn’t know how to fight. Cue the learn-to-fight montage! But he needs to win with good footwork, cue the dancing montage – and now the karate montage, and the cooking montage, and a never ending string of montages that are ridiculously connected.