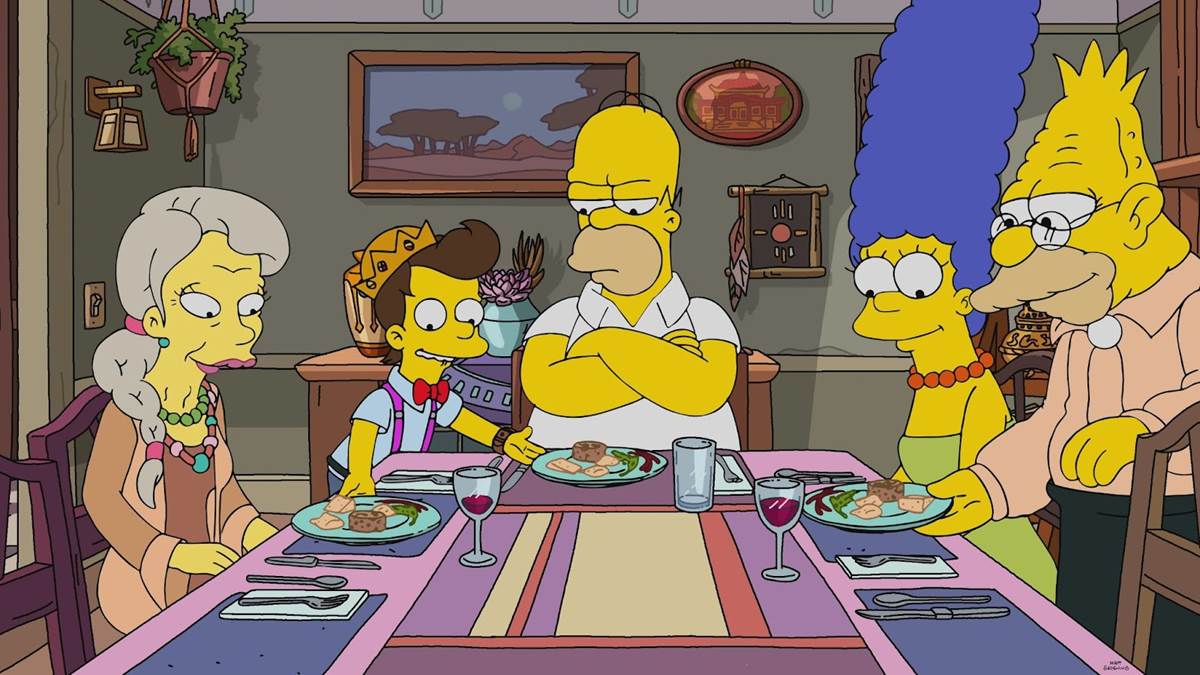 For an elderly gentleman with borderline dementia whose wife left at a much younger age, Abraham “Grampa” Simpson (voiced, as always, by Dan Castellaneta) has always done pretty well for himself in the romance department. We’ve seen him date a number of appropriately aged matches over the years, but he always seems to end up right where we first met him– back at his room in the Springfield Retirement Castle. “Step Brother from the Same Planet” begins at a Springfield craft fair, where Our Favorite Family runs into Grampa and his surprisingly bohemian new flame named Blythe (voiced by the legendary Carol Kane of Taxi fame). It seems the two met at the Retirement Castle where Blythe was teaching yoga classes, and hit it off after tapping into each other’s unorthodox rhythms– Abe’s involved a bullet he had shot into his own foot in “the war” to get out of KP duty. Meanwhile, Lisa (Yeardley Smith) finds herself being taunted by twins Sherri and Terri (Grey DeLisle) for being a “wet blanket” when it comes to having fun. Later, Homer (also Castellaneta) and Marge (Julie Kavner) are introduced to Blythe’s nerdy adopted son Calvin (Melissa McCarthy from The Heat and Bridesmaids), who Homer is certain must be getting a hard time from Abe, but it turns out the old man has wholly embraced being a father figure in the way he never did when he was actually raising his own son. Homer is immediately jealous of the attention Abe gives to Calvin, a conundrum that is exacerbated by Homer having to move in with his father and Blythe– rooming with Calvin– after he discovers he’s allergic to the wood polish Marge had purchased at the craft fair and spread over every surface in the Simpson house. At the Retirement Castle, Bart (Nancy Cartwright) and Lisa show up to pick up Grampa’s denture cup he left behind now that he’s living with his girlfriend, but after being told that Abe’s room is still covered for a further two weeks, they decide to throw the “Ultimate Slumber Party” there. 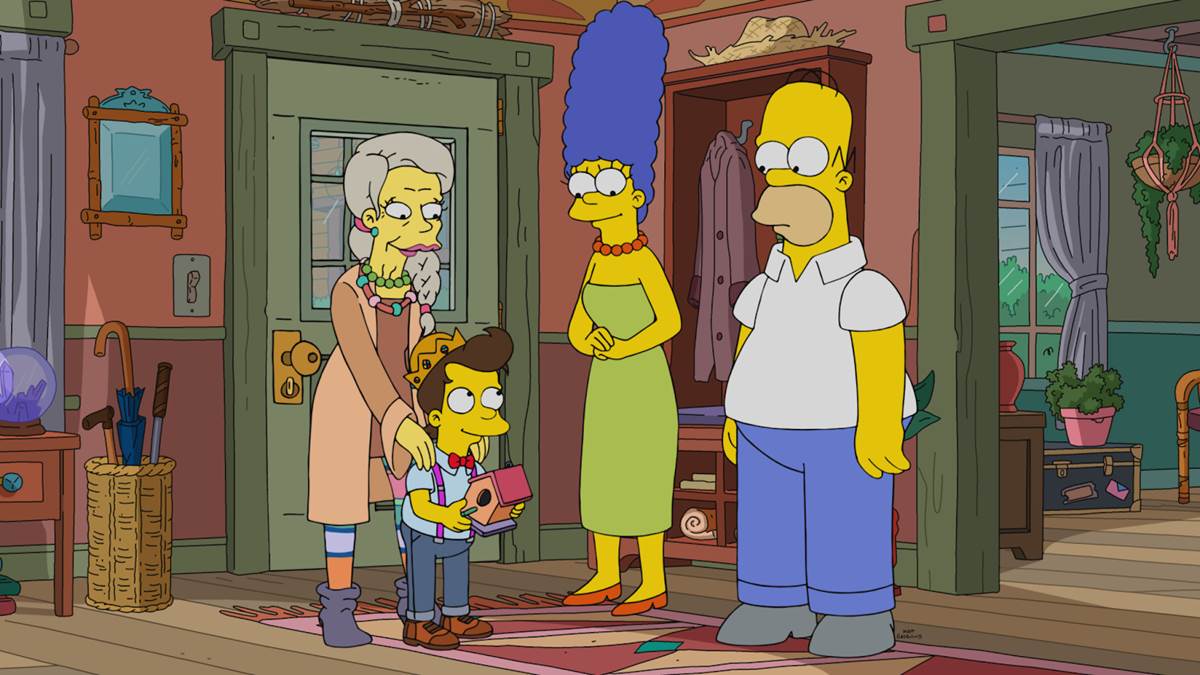 They invite all the kids from school and Lisa’s popularity quickly turns around, but soon things get out of control and Lisa must narc on her own party to Police Chief Wiggum (Hank Azaria). Fortunately for her, when the party is shut down, the other kids think Lisa is being arrested, and she retains her badge of coolness for now. At Blythe’s house, Homer is struggling to get along with Calvin, and the two pseudo-step brothers end up fighting over their desire for Abe’s attention. Thanks to Grampa’s glaucoma medication blurring his vision, Calvin and Homer are able to momentarily step into each other’s shoes and see how it feels to be treated so differently. By the end of the episode, of course, everyone is getting along again, and Homer takes an interest in Calvin’s taxidermy hobby, submitting a crudely made diorama of two shells with googly eyes pasted to them, which the instructor (probably correctly) interprets as a cry for his own father’s affection. Abe inevitably ends up alone again, but thankful that he’s communicating better with Homer, who’s still letting his calls go to voicemail, having learned nothing. I thought this was a fairly sweet, good-natured, and entertaining episode with some decent chuckles throughout, especially when the writers played with the dichotomy between Homer and Calvin’s polar-opposite personalities. Homer and Abe’s relationship has always been a rocky one, but it’s nice when they’re able to work through their differences and come to understand each other better, even if everything resets to the way it was by episode’s end, as tends to be the way of things in Springfield. 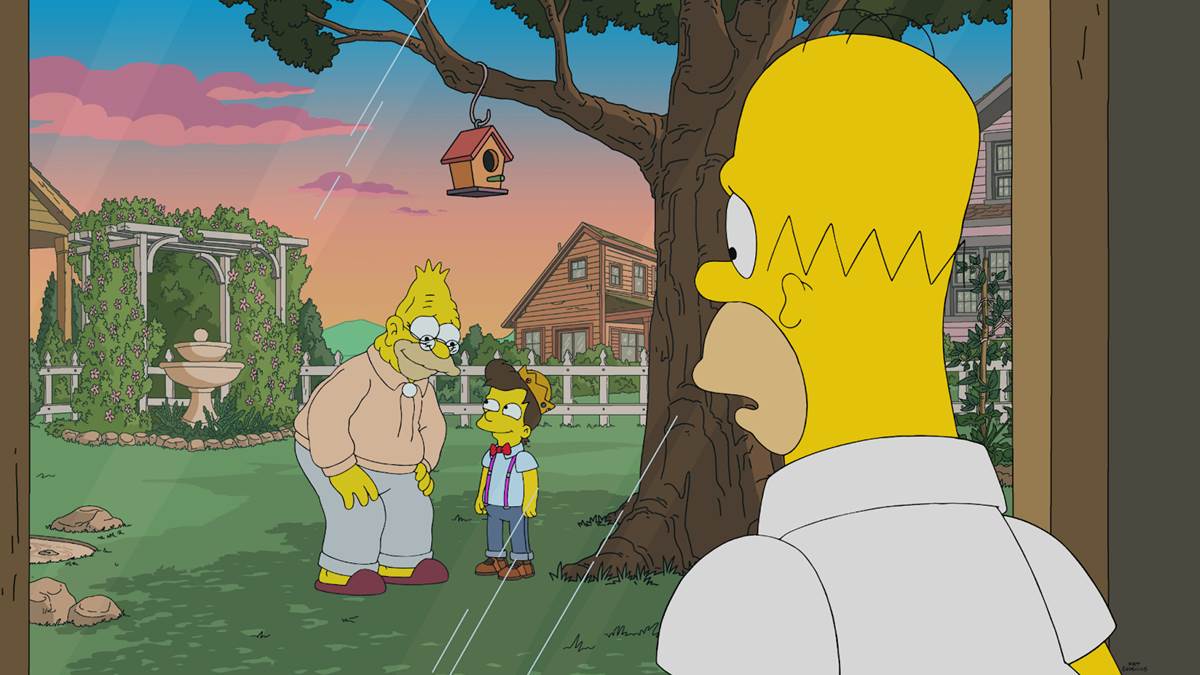