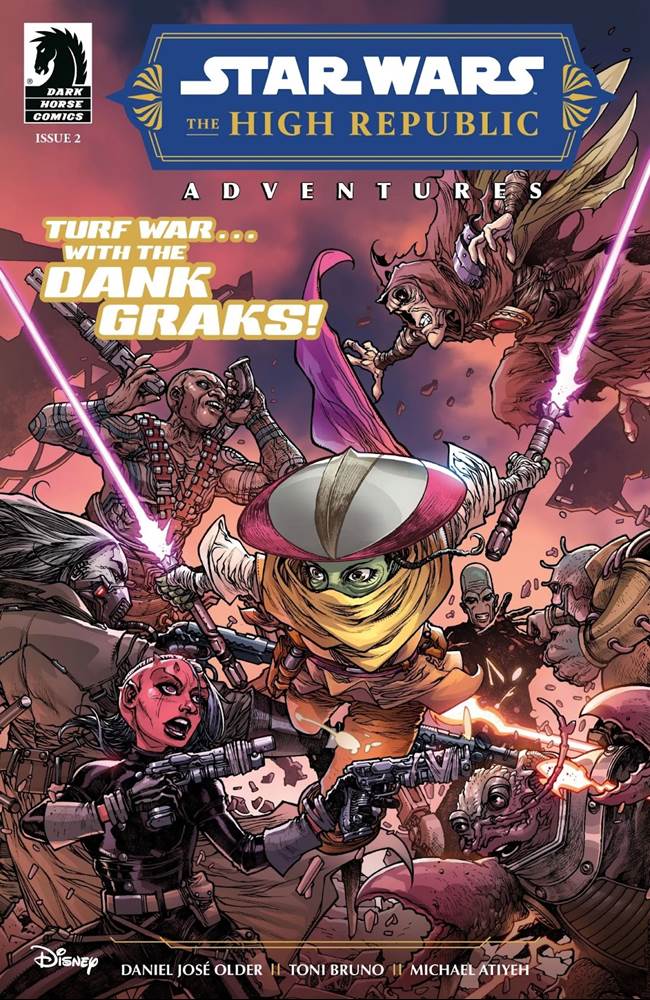 In the debut issue of Dark Horse Comics’ current run of Star Wars: The High Republic Adventures, released back in November of 2022, we met a younger, still-Padawan version of Kyuzo Jedi Sav Malagán, who enjoyed sneaking out of the Jedi temple on the planet Takodana to hang out at pirate queen Maz Kanata’s castle.

Now, in the second issue of this The High Republic Phase II offering, Sav has joined forces with Maz’s pirate crew, though the only one who knows she’s in training to become a Jedi Knight is Dexter Jettster– yes, Obi-Wan Kenobi’s diner-owning Besalisk pal from Attack of the Clones is around for this adventure as well. 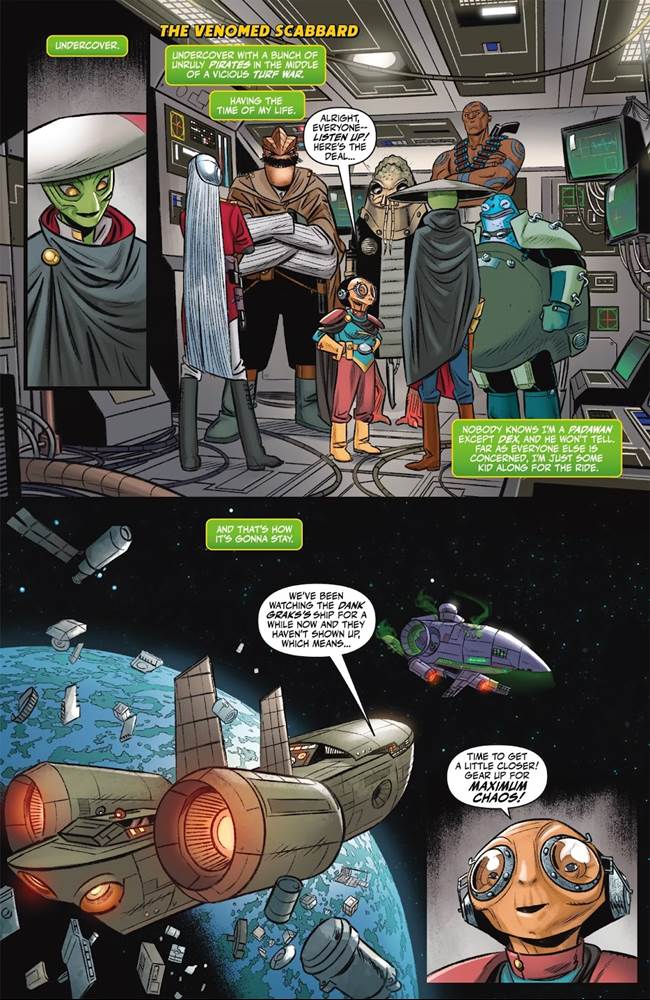 The High Republic Adventures Vol. 2, #2 begins with Maz assembling her crew on their ship the Venomed Scabbard, as they prepare to raid a rival pirate gang called the Dank Graks. But as they ready their mission, the Graks are also preparing their own counterattack, and the two crews end up boarding each other’s ships. The problem arises when it turns out that the Dank Graks’ ship uses Tund technology, which requires the Force to operate. That’s no issue for the Force-sensitive Maz Kanata, but now Sav Malagán must reveal her true nature in order to help Maz’s crew escape certain destruction. Right off the bat here I like that the Graks’ leader Arrik Von is a Force-using Geonosian, something that I don’t believe we’ve seen before in Star Wars. But as Maz’s crew invades the Grim Devourer, witty banter spouting from their dialogue boxes the entire time, I was finally able to put my finger on what makes writer Daniel José Older’s style stand out to me. I’ve come to believe that he writes his characters like a group of friends playing a roleplaying game together and coming up with the most fun, unique traits for their individual personas to possess– a great example in this comic is that one of the pirates that has a tiny, court-appointed alien parole officer on his back at all times. That approach hasn’t worked for me on a few occasions with Older’s previous output, but I think it clicks just fine here in this family-oriented take on the High Republic era. 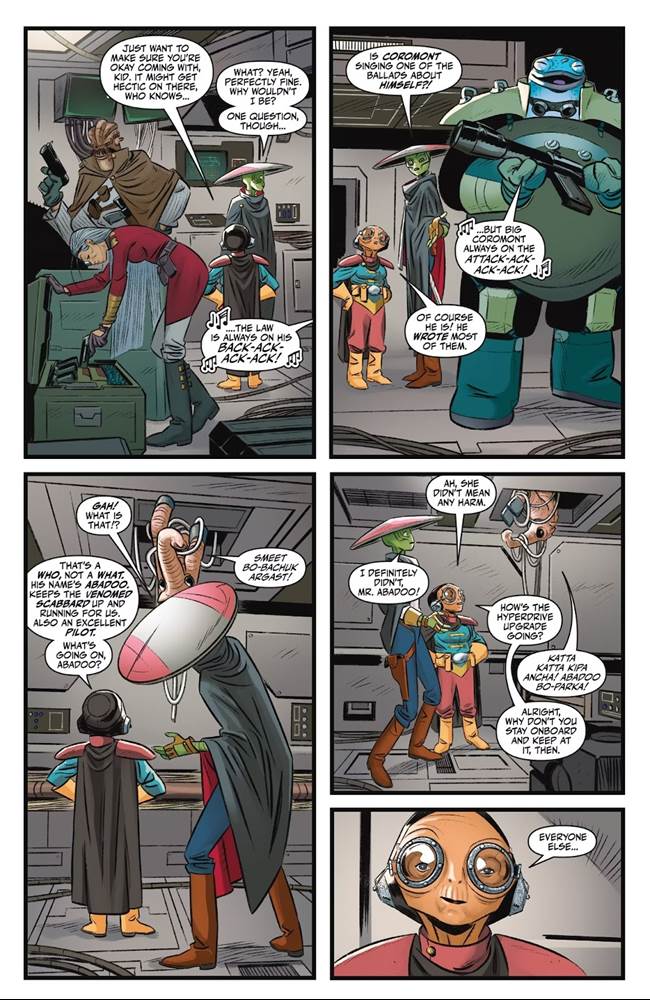 Anyway, with Maz and Sav both putting their Force knowledge to good use, the crew is able to outmaneuver the Dank Graks, though both sides still end up aboard the wrong vessels. They’re also both ultimately scared away from the fight by the arrival on the battle scene of Inspector Raf Thatchburn from the Galactic Antipiracy Command and his pet Corellian Hound. See, these are the kind of specifics that I would probably roll my eyes at in Star Wars content targeted at older audiences, but I can totally accept them in The High Republic Adventures. Regardless, Maz reveals that she knew Sav was a Padawan all along, and Sav agrees to temporarily join the crew to help Maz follow through on getting her ship back– not to mention rescuing poor Abadoo, a mechanic who stayed behind in the Venomed Scabbard to work on fixing the ship. It might mean trouble back at the Jedi temple upon Sav’s eventual return, but I’m sure it will be worth it for the opportunity and experience out in the field. Overall I’m enjoying this comic so far just fine, and I think Older’s collaboration with artist Toni Bruno has proven entertaining and brisk in these first couple of issues. I’m definitely curious to see if Sav Malagán will cross paths with other Jedi and narratives during this era the way Zeen Mrala and friends did in Phase I, but if that does happen I have a feeling it won’t be until after this initial arc. Either way, I bet this playful pirate adventure will probably tide me over in the meantime. 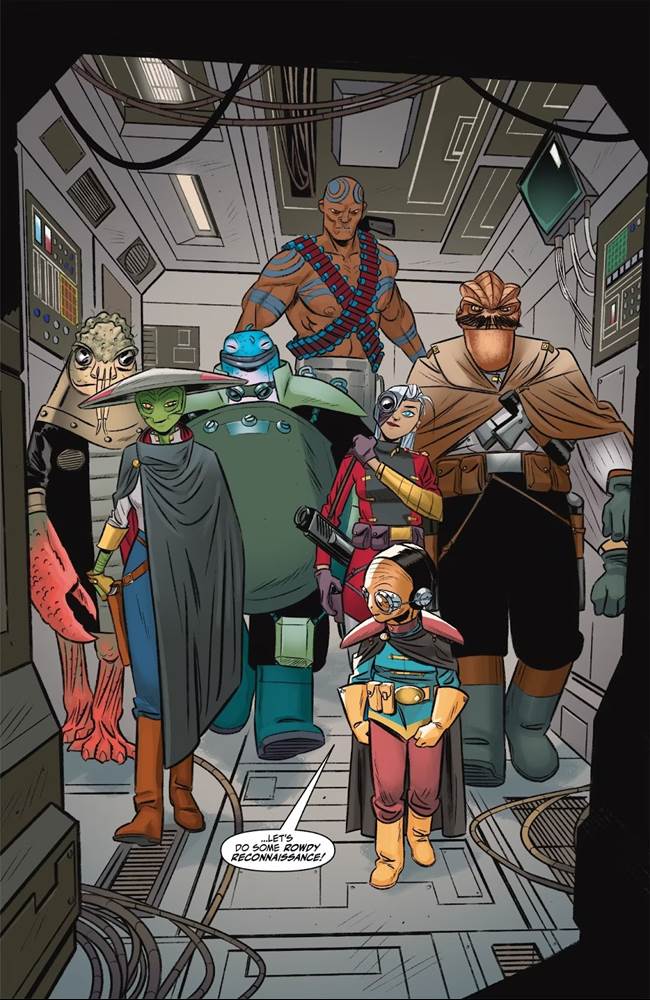