A reunion between Beilert Valance and his former bounty hunter cohorts has been a long time coming in Marvel’s ongoing Star Wars: Bounty Hunters comic book series. Since the events of 2021’s War of the Bounty Hunters crossover event, Valance has been conscripted to work for the Empire under Darth Vader.

But the only thing Vader and the Empire had holding over Beilert’s head was the location of the young girl Cadeliah, who Valance had sworn to protect. And in the latest issue of Star Wars: Bounty Hunters, that tenuous relationship comes crashing down. 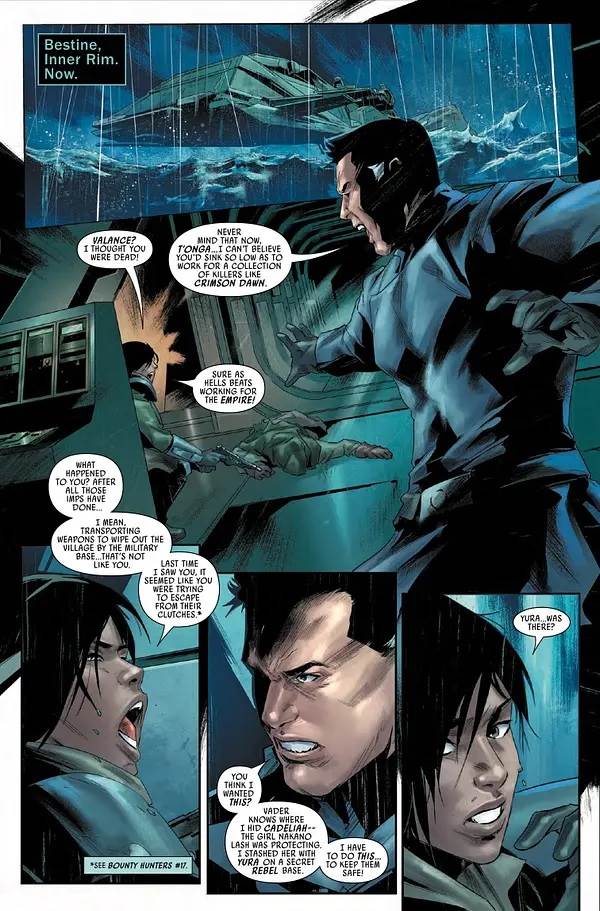 Bounty Hunters #30 begins with a flashback to a meeting between Nakano Lash and her crew at the bar where T’onga first met Losha– according to an Aurebesh sign over the entrance, it seems like she may have owned the place. But the point of this scene is to establish that Nakano wanted her crew (which included Valance at the time) to take care of each other, even in the event that she isn’t around anymore. We cut back to the “present”– the period set between the events of The Empire Strikes Back and Return of the Jedi– and find that T’onga and Valance have finally come face-to-face for the first time in over a dozen issues. At first they’re butting heads because T’onga is working for the crime syndicate Crimson Dawn and Valance is on Bestine with their sworn enemy the Empire, but soon T’onga reveals the truth about Beilert’s situation. She tells him that Cadeliah is with Lady Qi’ra and did not care to be rescued, and that the woman who was watching over the girl, Yura, is already dead thanks to Imperial bombardment of her rebel camp. Valance naturally has a hard time accepting this information, but once he does it’s bad news for the Empire, as Beilert goes ballistic on a battalion of shoretroopers on Bestine. It’s a mix of fun and disquieting to watch Valance let loose on Imperial troops, but ultimately it’s quite freeing to see him shake loose from his Imperial shackles and rejoin the ranks of his bounty hunter brethren. 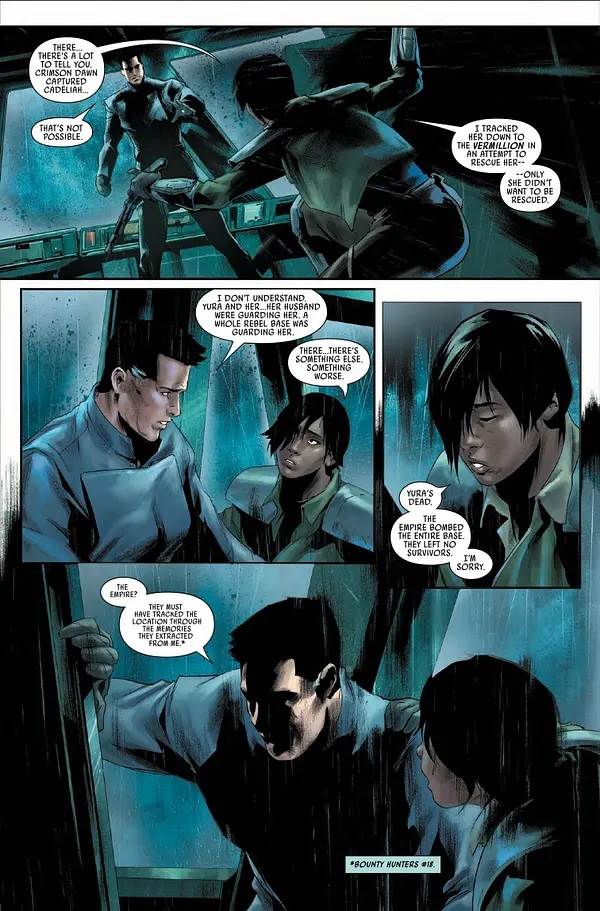 He feels betrayed by Lieutenant Hayden, with whom he had developed a relationship during his time serving the Empire again, but what really pushes him over the edge is the fact that the Imperials got the information from his own head during an interrogation session after his capture. Then this issue ends with a tease for a showdown between two immovable forces that have gone head-to-head before: cyborg bounty hunter Beilert Valance and Dark Lord of the Sith Darth Vader, who says that Valence has “proven to be a disappointment” as he disembarks a shuttle on the final page. I must say, due to the clarity of the storytelling, the moving character moments, and the sheer energy of the action, this turned out to be one of my favorite issues of Bounty Hunters so far, and next month’s installment promises to be even more gratifying. My only nitpick is that cover artists Giuseppe Camuncoli and Jesus Aburtov have chosen (maybe at Marvel or Lucasfilm Publishing’s request?) to depict Valance on the cover in his old bounty hunter outfit with half of his face’s synthetic skin missing, like he used to look before the Empire fixed him up. It’s a weird bit of false advertising for the contents of the comic, but I guess the character wouldn’t be recognizable or interesting-looking enough to sell copies without those particular earmarks. Regardless, I’ll say that I’m really digging Star Wars: Bounty Hunters right now and I hope writer Ethan Sacks and interior artist Paolo Villanelli continue to maintain this level of quality. 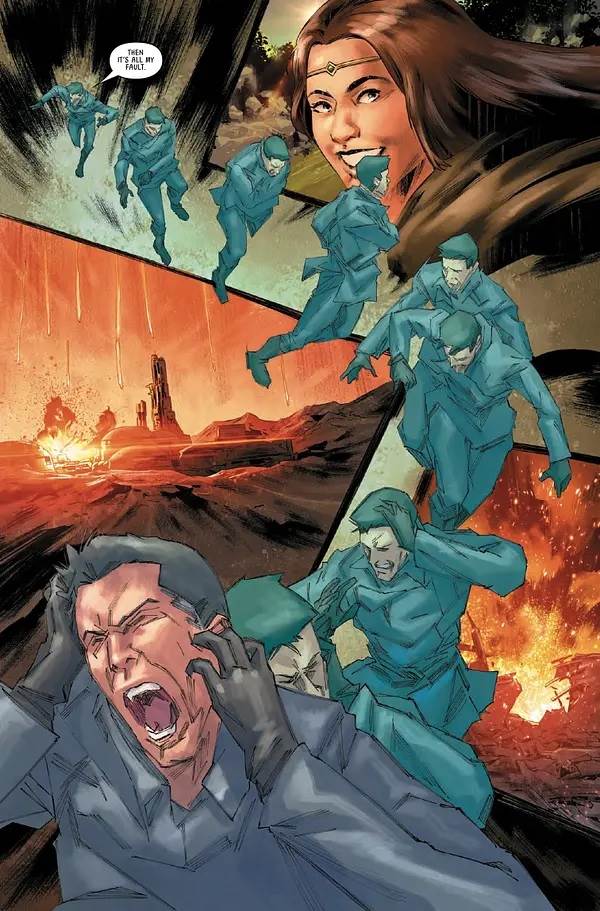