Welcome to Disney Extinct Attractions. My name is Cole Geryak and I’ll be your baton tosser on today’s unofficial marching routes.

This week, things will be a little bit different because I’m going to be writing about three different parades and two of them appeared in three Disney theme parks. Plus, today is Throwback Thursday, so this article is getting a facelift on its way over to its new home. 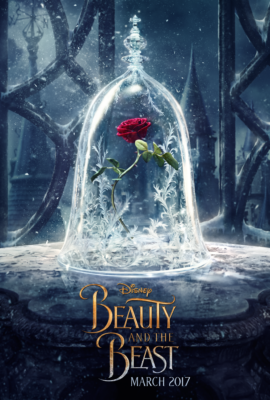 As we all know by now, a live-action Beauty and the Beast film starring Emma Watson is currently in the works. I know that I cannot wait for this film to come out because Beauty and the Beast is my favorite Disney film of all-time. The cast for this reimagining is absolutely perfect, so I doubt that I’ll be disappointed when I finally get to see the film. But hearing this news about the film gets me thinking about how much I love the original, primarily because of the time frame in which it was made. 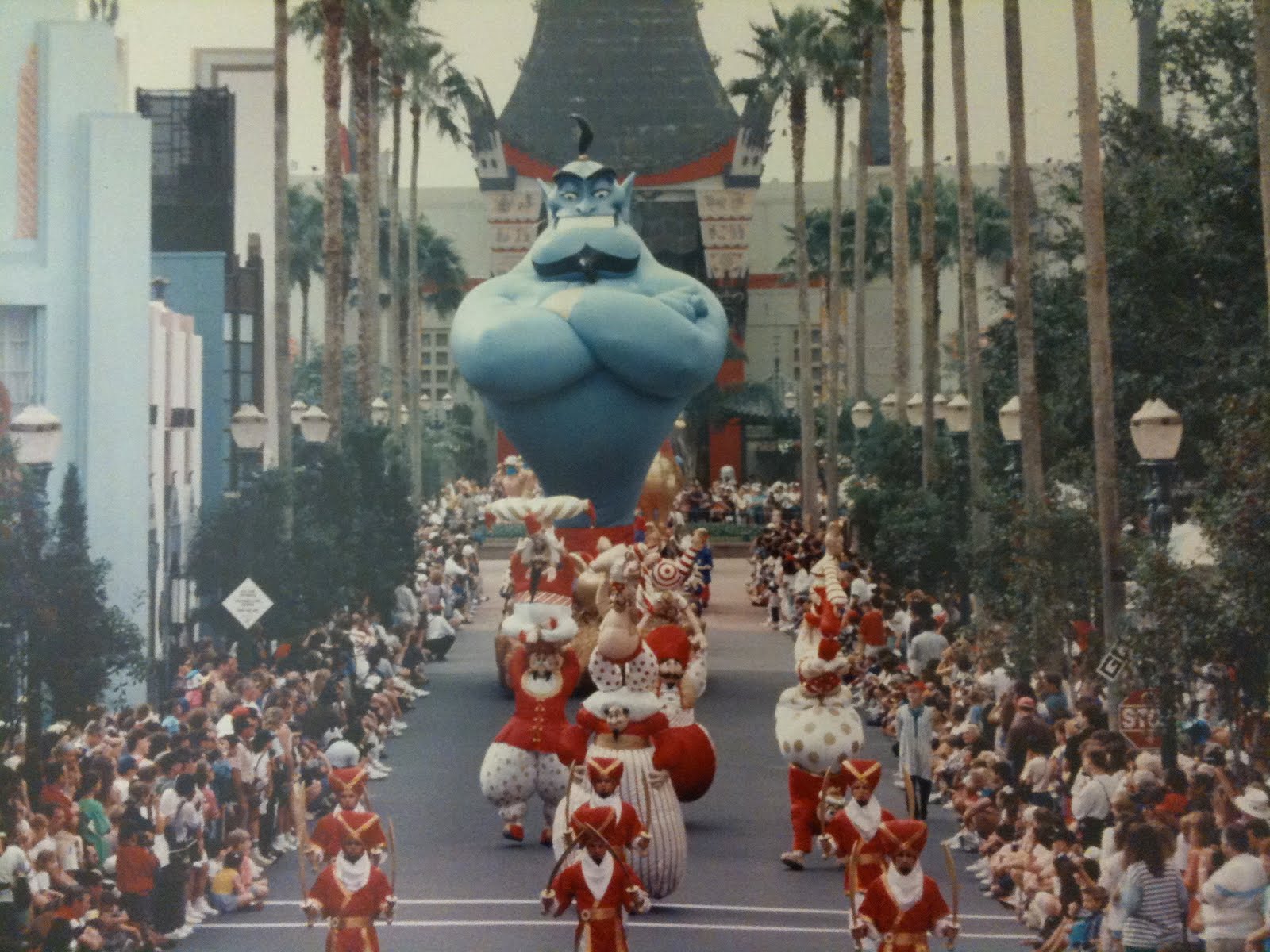 In the early 1990s, the Disney Parks began to capitalize upon the popularity of their animated movies going through what is known as the Disney Renaissance. During this time, almost every Animated Classic that Disney produced hit home with audiences, all of the movies seemingly doing no wrong. With that in mind, Disney began to shape its parades around these successful movies starting with Aladdin. 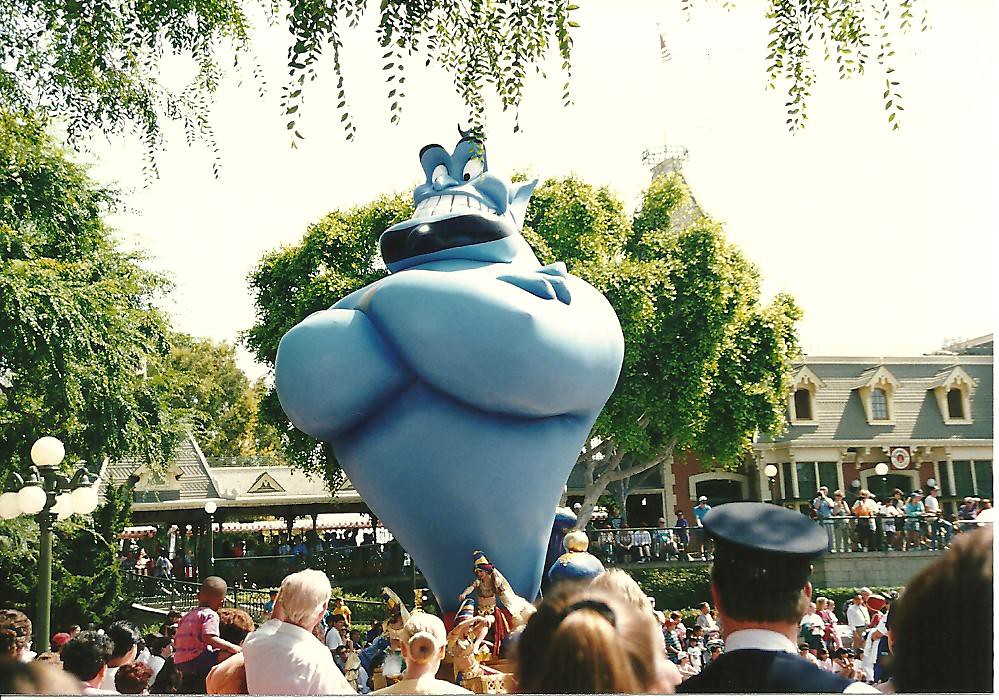 Via The Disneyland Gazette

Aladdin’s Royal Caravan first opened at Disney-MGM Studios on December 21, 1992, less than a month after the movie debuted. Disneyland and Disneyland Paris quickly followed suit opening their versions on April 2, 1993 and sometime in 1993 respectively (for some reason Disneyland Paris doesn’t like to record specific dates that their attractions open). These parades marked the beginning of the movie tie-in parades that dominated the Disney Parks during the 1990s.

With Aladdin’s Royal Caravan, the parade designers gave the charismatic Genie his due, as he is the true star of the parade. I counted at least five Genies throughout the course of the parade, so he must have been using some kind of magic to keep duplicating himself. His appearances do keep with the story of the parade, though, because as the name suggests, the parade revolves around Aladdin’s caravan during the song “Prince Ali.” In the film, the Genie pops up as many different characters over the course of the song, so it only makes fitting for the same to happen in the parade. 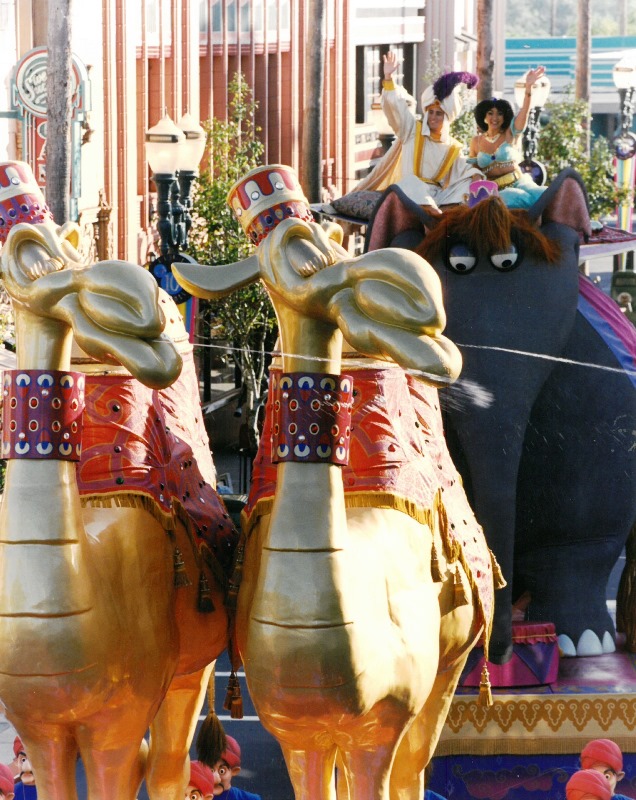 Eventually, it was time for the parades to focus on the next Disney Animated Classic, so Aladdin’s Royal Caravan ended its run in 1994 in California and Paris, but not until 1995 in Florida. Though, it wasn’t the end for every part of the attraction. The spitting camels seen above can now be found near The Magic Carpets of Aladdin at the Magic Kingdom, so the parade was given a chance to live on forever.

None of the versions of the parade are all that different, but I’ll post some of them here so you have your choice. The top video is from Disneyland, the bottom is from Walt Disney World and Disneyland Paris did not have one, unfortunately.

I apologize for the quality of the videos — they were filmed on early 1990s cameras (so you are stuck with that nice grainy image). But in the setting of our next parade, it’d be unlikely to find any cameras (mainly because there are no humans in the movie). 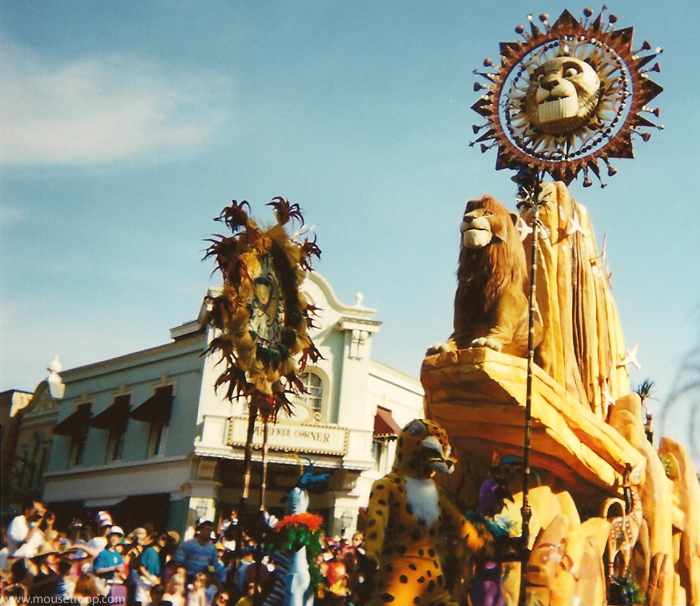 The Lion King Celebration opened at Disneyland on July 1, 1994 and was immediately heralded as a ground-breaking parade. The scope of the parade exceeded anything that had been seen in a parade because it was bigger and bolder than any prior parade. The Disneyland-exclusive moved along the parade route in the usual way but also made four stops along the way for a show-stopping performance of “The Circle of Life.” All 89 cast members (all dressed as some kind of animal) brought the guests into the mix to create magical memories that would never fade.

In addition to its amazing visual spectacle, the parade should also be remembered for its introduction of Audio-Animatronics to Disney parades (Zazu), as well as its extensive use of “Puppetronics.” Puppetronics are exactly what they sound like, giant puppets that also included animatronics inside to help the puppeteers have more control over every aspect of their characters. This innovation, combined with the awesome visuals, helped the parade move into another stratosphere as one of the most beloved parades in Disneyland history. 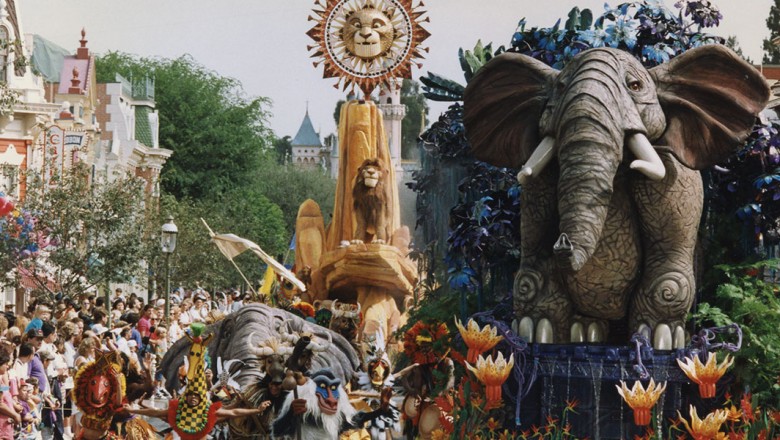 The Lion King Celebration did its best to bring Africa to Disneyland through the grandiose party that was this parade. Guests went crazy for it and Disney even made a video of the parade that showed the whole parade and some background information (which I actually own but have no idea where it is). Luckily, you can still find that video online right below. I definitely recommend watching it because you can learn a lot, and the parade is just so much fun to watch.

Not all attractions can live forever, though, so The Lion King Celebration had its last run on June 1, 1997, a very long run for a parade. Its closure wasn’t the end of the floats, however, as they were taken to Disney’s Animal Kingdom and used in The Festival of the Lion King, creating a true Circle of Life for the parade.

The demise of The Lion King Celebration left the parade route open for the Hercules Victory Parade to make its way through Disneyland on June 27, 1997. Disneyland was not enough for Hercules though, as he also made his way to Disney-MGM Studios (June 27, 1997), Tokyo Disneyland (July 19, 1997), and Disneyland Paris (1997). Hercules certainly proved that he could go the distance.

The most interesting tidbit about the parade is that the version in Disneyland was actually originally to serve primarily as a little appetizer with the main course being Light Magic, the replacement to the Main Street Electrical Parade. But Light Magic ended up tasting pretty stale to guests, who flocked to see the Hercules Victory Parade, prompting an LA Times article about the whole occurrence (meaning it was either a big deal or nothing was going on in the world at the time). Given how Herc was on a roll, I find it pretty surprising that we never saw a larger presence of Hercules in the parks, but oh well.

The parades at Disneyland and Disney MGM-Studios can be found by clicking on the videos below (again Disneyland above, Walt Disney World below). These two versions were really similar in nature, but both had a different look that really made each its own. The parades actually tell the entire story of Hercules, and I think that they pull it off pretty spectacularly, combining the beloved songs with many of the elements you see in the film.

Tokyo Disneyland’s version (below) differed quite a bit because it was more of a show than a parade. Just like The Lion King Celebration, the floats stopped at places along the route, adding a little performance by each float (and if you were lucky and near the Hercules float, you got to see Herc fight Hades).

Finally, Disneyland Paris’s parade pales in comparison to the other three versions because there are only two floats, making it much more of a mini-parade. But it’s the only parade where you get to hear “Zero to Hero” in French, and it truly sounds beautiful in the language of love, making it worth a quick watch, as well.

But by 1998, all of the Hercules parades were replaced in the parks, primarily with Mulan parades, simply because it was time to move on to the next Disney Animated Classic that had been released. Parades always have a shorter lifespan than other attractions, so if you really like a parade, make sure to keep seeing it because it might be gone next time you go.

And with that, we have reached the final float of the Disney Animated Classic parade of parades. I know there a few more that were thrown in during those years, but they’ll have to wait until another day.

As for next week, here are some clues to help you along!

1. The park closed and stands abandoned to this day.

2. This park primarily dealt with water.

3. There are only two parks/areas to have permanently closed, so those clues should pretty much give it away.

Thank you for reading this post, and I hope you enjoyed it! As always, I love hearing your feedback, so be sure to reach out to me through the comments, Twitter, or any of the links in my bio area.

And with that beautiful video, have a magical day!